As we continue to progress towards a playable demo, we decided it was about time we updated the existing trailer to be more reflective of the latest updates

Towards the end of last year we set out the target to produce an alpha demo build of Gym Empire by the end of the year.

2018 ended, 2019 arrived and we missed the target to release the alpha demo. However we have made a huge amount of progress and decided to update the trailer to reflect the new developments.

The primary reason to develop the demo was to give the amazing Discord community something to start picking apart and analysing so they could help form the direction of Gym Empire. It was also to say thank you and give something in return for the continued support the community has shown.

With that being said it would not make sense to just rush something out for the sake of it. This wouldn't achieve either of the goals. It wouldn't provide an accurate representation of the game and it would give the community the quality they deserve.

Therefore we made the decision at the end of 2018 to delay the demo. The community have been supportive of the choice and we thank them wholeheartedly.

In the last post we talked about developing the build system and updating the clients behaviour. The build system is an important part of the game mechanics and it is important to get the fundamentals correct. The client behaviour is also really important to the immersion of the game. The more realistic their behaviours the more believable the simulation is.

Since the last update we've managed to progress the build system to a point whereby it is fully functional and performs how we need it to for the demo. There will be some aesthetic fixes but other than that all is looking good. 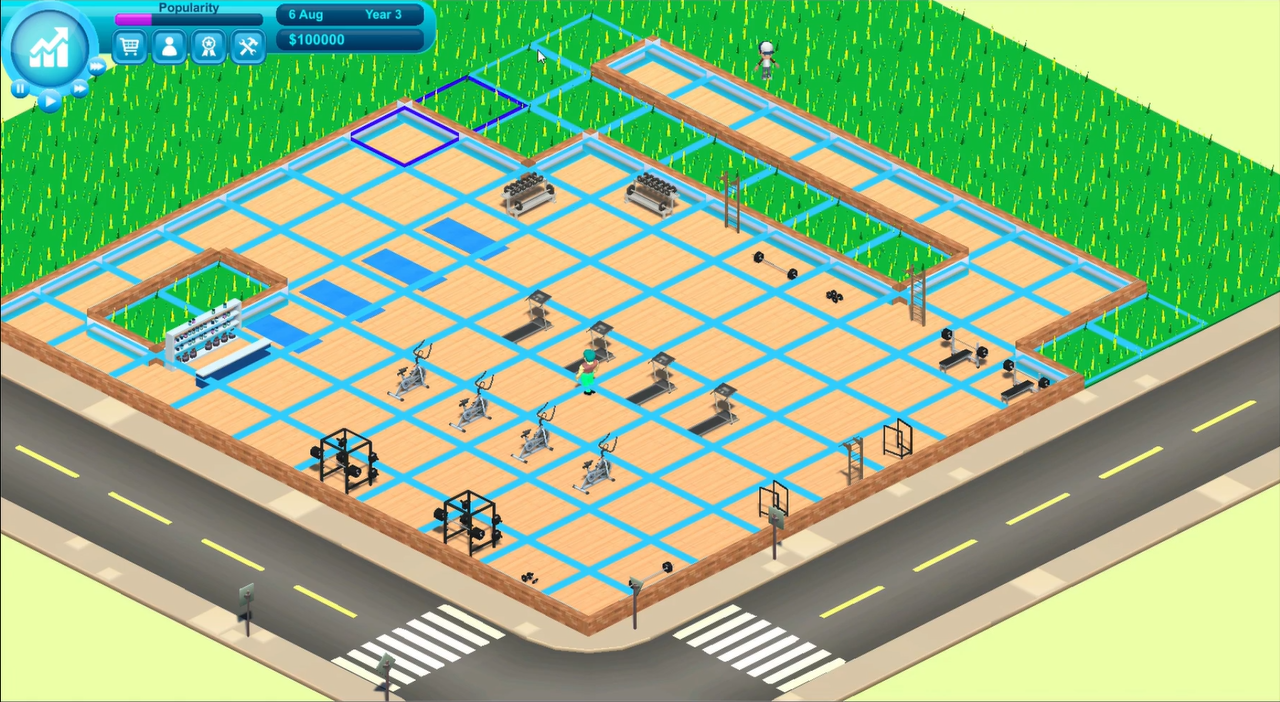 The client and staff behaviours have now been updated so that they no longer appear magically in the gym. Clients now make their way over to the gym entrance from outside. Existing members go straight to working out, while new clients wait to be greeted. Staff also make their from outside and head into the gym to start working. 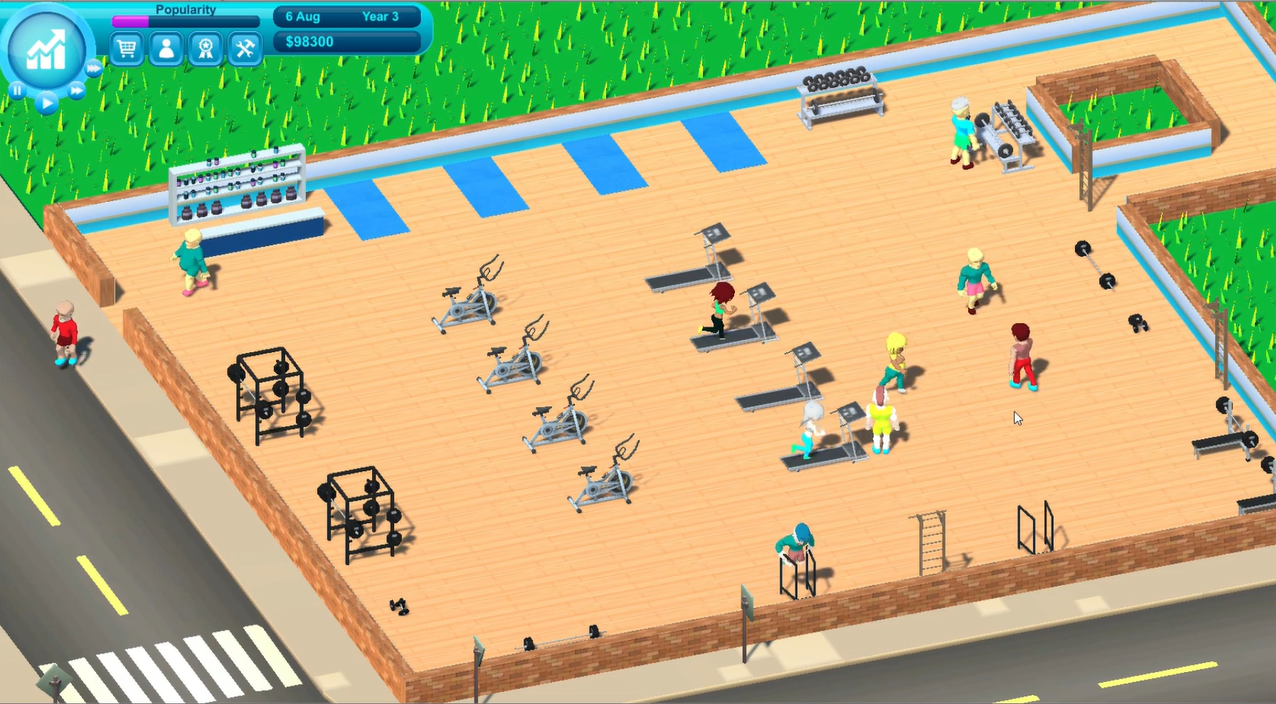 There have also been a number of UI updates done to Gym Empire. The start menu and screen has now been developed and is fully functional and working to start the game.

We have also been updating and refining the menu systems style. We're continuing to develop the look of the UI until it reaches that sweet spot. However the changes to date have already started to make a big impact. 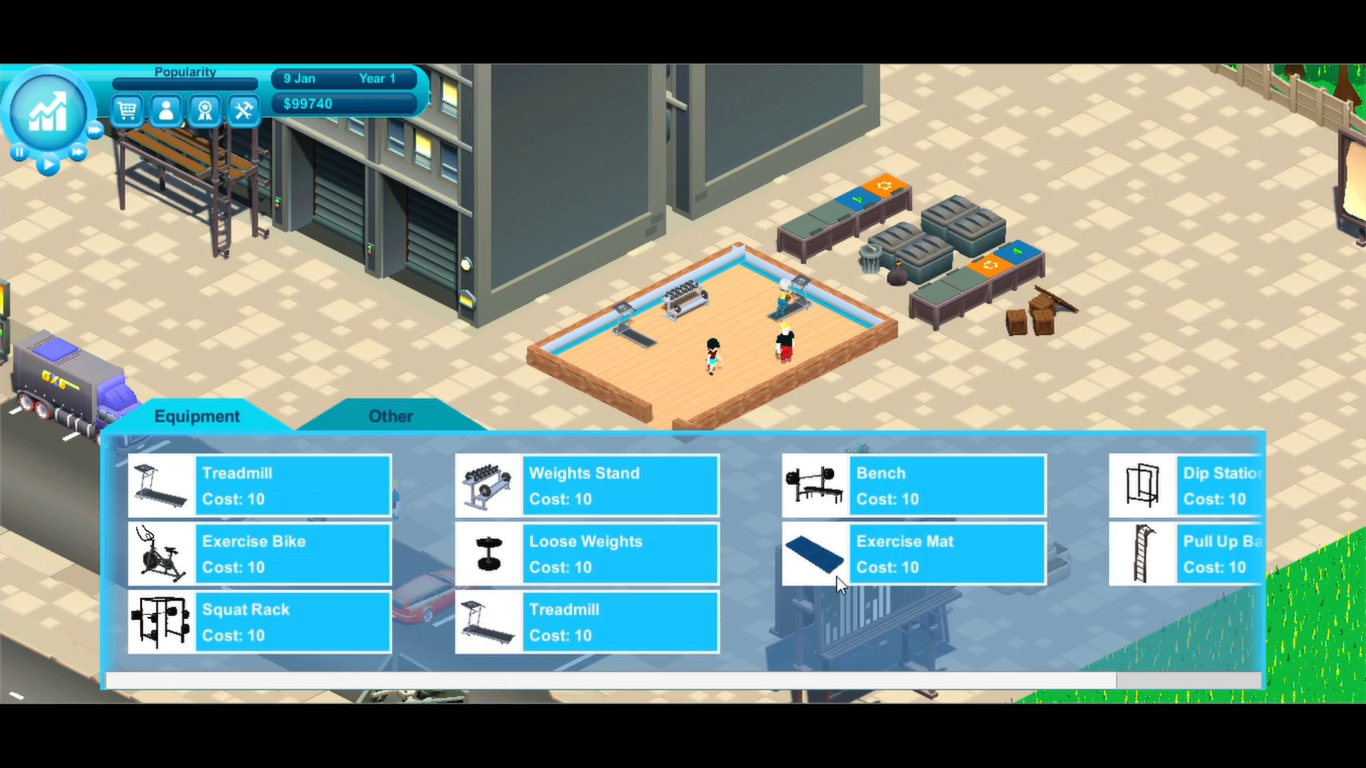 The first Gym Empire trailer was done way back before we even settled on the client models. As such it was massively out of date and no longer represented what Gym Empire is. With all the changes over the past year and with the alpha demo coming out soon we decided it was essential to update the trailer.

As far as trailers go, it focuses mostly on the aesthetic look of the game. It doesn't delve into the mechanics of the gameplay etc. When the alpha demo is released we will be making another trailer that goes into much more detail around the gameplay style and mechanics. Until then we just wanted people who aren't in touch with the weekly updates to know what Gym Empire now looks like.

What's Left To Do?

There are a few more things to sort out before the Gym Empire alpha demo is released. Primarily the save game system and the mechanics of picking new environments.

We are currently in the middle of developing the save game system and it has taken a bit longer than expected. Again the Discord community have been incredibly understanding and patient with the lack of juicy updates over the past month as we develop the save system. Once that is complete we will be back onto the normal flow of visual updates and news for Gym Empire.