We are proud to present Galactic Fighters a space-shooter arcade made up of 13 levels. If you like retro and hard games that's perfect for you!

DO you LIKE this game? Then support it here!

Unknown wrote: In a distant future or in a remote past…
the Universe has been invaded by an interdimensional terrorist group called Bokor. Travelling through the spirals of Multiverso, Bokor has set up a base on our planet, with the intention of sucking all the vital energy out of it.

Most of the interplanetary races that have tried to defeat it have failed. On the contrary, others have formed an alliance with Bokor, with the illusion of being rewarded.

The operation “Riding a Wormhole” is the last chance of survival for our Universe: a suicide mission which consists in entering the solar system, where Bokor’s leader resides, and attacking him with an array of weapons specially designed to kill him.

Chances of surviving are low.
You are the captain of the “Human Spacial Navy” and you have volunteered for this crazy mission.
Captain! You are the last chance for all the races of this Universe! Are you ready to face the danger and risk your life for the safety of of your race and all the others?

Galactic Fighters is a space-shooter arcade made up of 13 levels, in which the player has to fight against waves of enemy spaceships and bossesto prevent the galaxy from being destroyed by those creatures.

During your adventure you will be able to unlock and use several spaceships provided with weapons and unique characteristics.

What is more is that you could also buy many expansions for your spaceships, in order to improve them! Travel through different worlds, defeat waves of enemies and bosses... and save the galaxy! Or die trying! =D

The player can unlock and play with 5 different spaceships

The “Space Crow” is a little and practical spaceship; although it is not provided with extremely powerful weapons, it can shoot many lasers per second and its small size allows it to avoid easily the enemy’s projectiles, compensating its low resistance.

The “Thunder Lobster” is more armoured than the “Space Crow”; it attacks its enemies by using electrical discharges and though small in quantity, the shots from its cannons are by far the most dangerous. 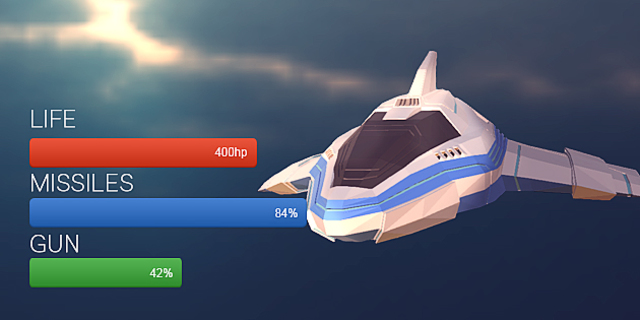 The “White Eagle” is probably the most dangerous spaceship. The high power of its missiles and its shots made of dark matter panicks its enemies. It is also very strong and well-armoured.

The “Indifaticable” is an armoured spaceship capable of attacking its enemies with incredible energy waves and at the same time, its powerful central cannon targets them with a huge number of projectiles.

The “Tonnant” is the flagship. Its armour and its missiles are unmatched; it fires asteroids at incredible speed against its enemies and smashes every single spaceship to space bits.

"White Spider": Its clever moves are its strength. With its magnetic shield it is able to deflect projectiles towards its enemies. Few survive its deadly trap!

The "Red Scorpion" is a very powerful spaceship which alternates fast side cannons shots with a very dangerous incandescent ray coming from the back!

"Galactic Apache": Speed is its strength. It is able to dodge blows and rush at its enemies at a surprising speed. Only a very agile captain can avoid it!

The "Iron Dragonfly" has an impressive arsenal: 5 cannons attack its enemies with an endless flow of projectiles. Those who cannot avoid its explosive bombs have no way out!

The "Bokor Ship" is the enemy’s flagship. Nobody knows what its arsenal and its peculiarities are. In fact, no one who has faced it has ever survived to describe it....

Are you ready? Let's go!