ALPHA 26 is out on Steam Friday 11th March - catch up on all the latest additions.

It's been a good while since our last dev blog. After increasing the frequency of patches last summer to at least fortnightly, achieving that has meant making time cuts elsewhere. If you don't follow the experimental releases much, in this post we cover what's new since the last blog.

These are a selection of the highlights. For a more comprehensive list of changes, please read the patch notes in the Steam Community Forum.

Being able to trade goods is a life saver if your economy is stuttering. It could be surplus production you're looking to sell for coin, the need to stave off starvation by buying in much needed food supplies, or picking up magic essence for crafting magic items. The Marketplace is a new advanced building with a dedicated UI. 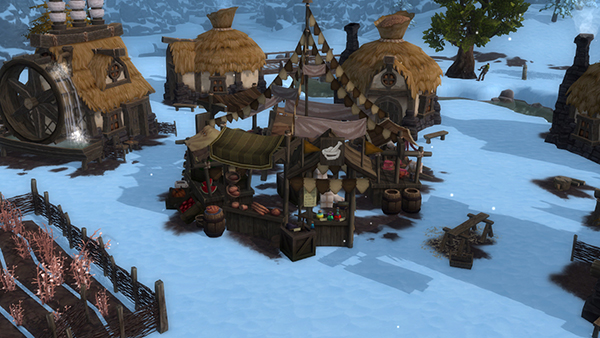 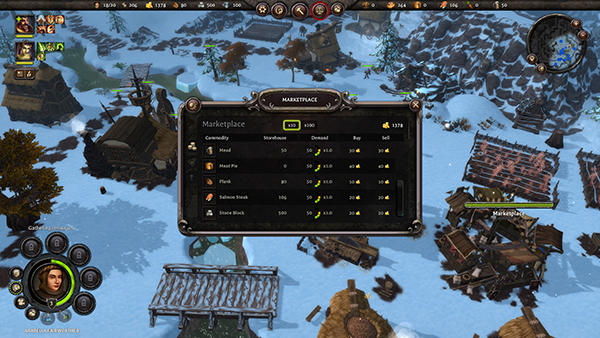 Villagers can man the well and pump Buckets Of Water. Water is used in potion making (crafting at the Herbalist's Den), will soon be added as an input into brewing, and is a precursor to being able to extinguish building fires. 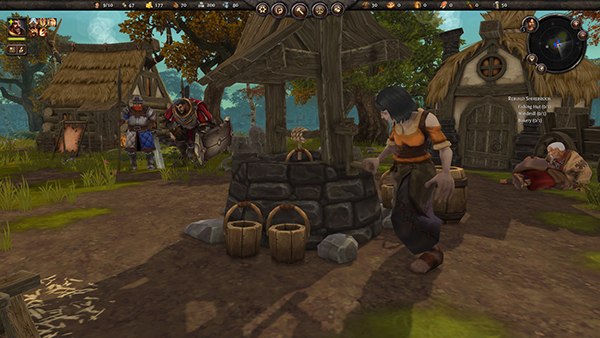 The first visitor to the well pumps five buckets of water which appear around the foot of the well. Once finished, they pick up a bucket and head off back to what they were doing. The next visitor simply collects one of the pre-pumped buckets. If no buckets remain, they take their turn to pump five more buckets.

Faction standing is an essential system for implementing the campaign storyline. Helping one faction causes your standing with the opposing faction to decline. We added several new nodes to Workbench (the visual scripting environment built into the Editor) that allow us to tweak values as players complete quests.

Faction standing determines how monsters react to the player when they come into range. Enemies naturally attack, while neutral and friendly factions will go about their business, allowing the player to walk around faction villages and interact with NPCs.

There are two ways to keep heroes alive. One is to recruit Willow the healer. The other is to craft health and power potions. We've added wild herb patches around the environments which can be harvested by selecting a villager and right clicking on the herbs. Wild herb patches regenerate over time and build up to a capped amount so you don't have to constantly collect them. At the Herbalist's Den, potions can be mixed under the building dialog crafting tab. First however, players need to complete Elixirs research to unlock the crafting recipes. Crafting potions requires wild herbs and water from the well, and are placed in player's main inventory.

On the character portrait wheel in the bottom left of the screen, icon buttons can be used to consume power and health potions. The game selects the most appropriate potion size to avoid wastage. Players don't want to drink a Greater Health Potion when a Lesser Health Potion will do the job.

We've added party revival, and Willow's (the healer hero) revive ability so there's no more perma-death. When hero health is reduced to zero, they are knocked unconscious and their portrait in the top left of the screen turns deep red. At the end of the battle heroes regain conciousness and a little health, enabling players to continue their adventure without having to reload. In village maps there is a 5 minute cool down to prevent cheating.

Willow's targeted revive ability can be used during combat to get a hero back into the fight. Ability target in general has been overhauled, and targets filtered so that only the relevant character types get highlighted. 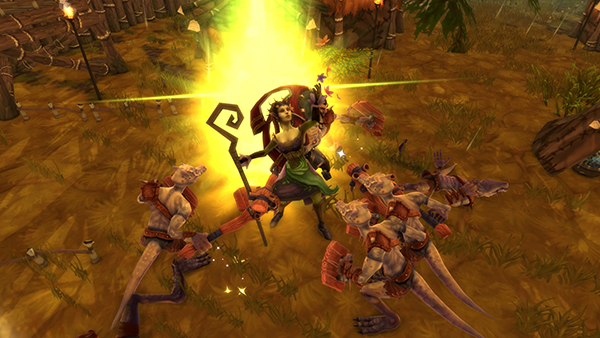 The loot system has been overhauled to support scaling as player heroes move up in level. Loot is now dynamically generated, and items can finally receive meaningful magical properties. Names comprise a prefix, the weapon type, and a suffix.

For example, players might come across a Stalwart Sword Of Freezing. The stalwart prefix represents a Tier 2 strength buff to the heroes attributes (+3 str), while the freezing suffix is a Tier 4 frost damage buff that adds a significant amount of additional magical damage. 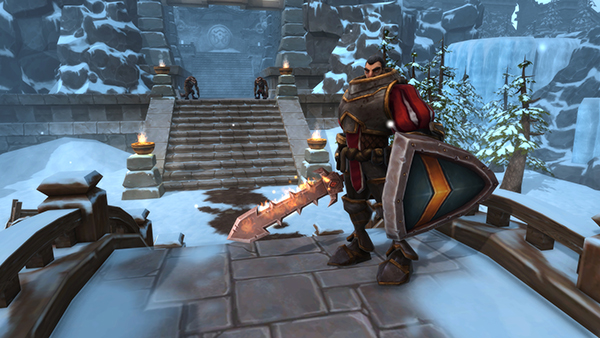 Each prefix and suffix has four tiers. Here are the strength and freezing tiers:

Standard fare for an RPG game, we've added smashable crates, urns and sacks that can contain loot. There's not much more I need to say about that as we all know how they work.

A widely requested feature was a centralized view of all buildings within a village. The new building list under the civics options show players active production, ongoing research, and provides quick access to further inspect each building.

Inspecting a building from the list and then closing the building dialog will return players back to the civics list. We've done this so you can quickly jump in and out of buildings to set research.

Home to the Gladefolk, the Glade is one of the first faction maps players will explore as part of the campaign. It uses a dedicated editor kit that level designers can use to make their own leafy woodlands.

The Glade is playable, but is currently work in progress. 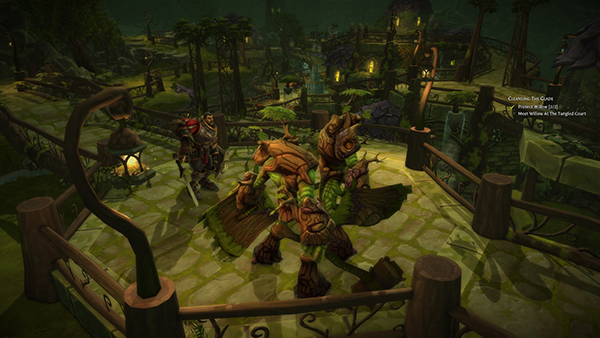 Bla'tu is the Toadkin King. His Palace will eventually be accessed via an entirely new swamp map created for the campaign. For now, we've linked the ruins in the Sandbox Swamp map with portal doors so players can go and explore. Bla'tu's Palace is also work in progress, testing the extended Swamp Ruins editor kit and new pieces including pressure plates that can be scripted in Workbench to create small puzzles or trigger traps. 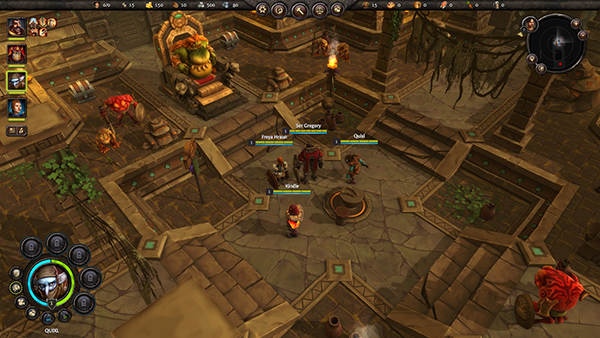 Having implemented Ser Gregory and Willow's special abilities last year, we paused and moved on to other higher priority tasks. Now that we're rolling out campaign, we have since returned and all of the hero ability visual effects are now ready to implement. We've actually gone beyond that, and have been creating effects for bosses, behemoths and NPCs. Expect more heroes to be added in the first half of this year.

The Editor continues to become more powerful and flexible, supporting us in rolling out the scripting for campaign gameplay. One of the key changes has been the addition of cross-map questing. It is now possible to start a quest in one map, and have it's state continue over into another map. The number of visual nodes has grown tremendously over the last six months, and we can achieve some really cool things that will add interest. 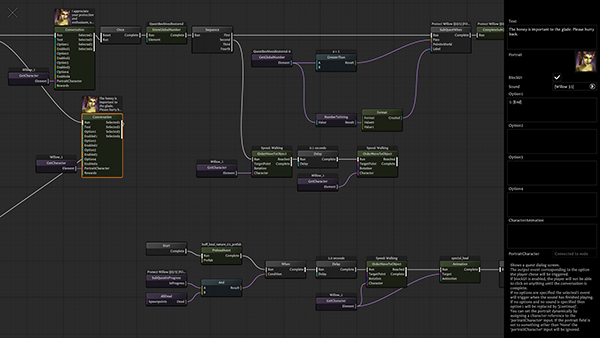 It's a little crazy just how many illustrations there are in Folk Tale. We now have 700+ loot icons, 45 hero ability icons, and 174 character portraits, hair and uniform illustrations all lovingly hand painted. Here are a selection of the latest additions:

Our character artist Allan has now modelled and painted all 32 faction characters including leaders, heroes, behemoths, and ambassadors. Each faction is now being fleshed out with creeps. Once they've been rigged and animated, imported into the game, and hooked up with the visual effects, we'll start sharing them on the blog.