Welcome back to the Expect the Unexpected series! Don't forget to check out the first two episodes of the series before diving into all the tools you get by entering this bizarre show. In the end, you don't start watching your favorite Netflix series from the 3rd episode, right? 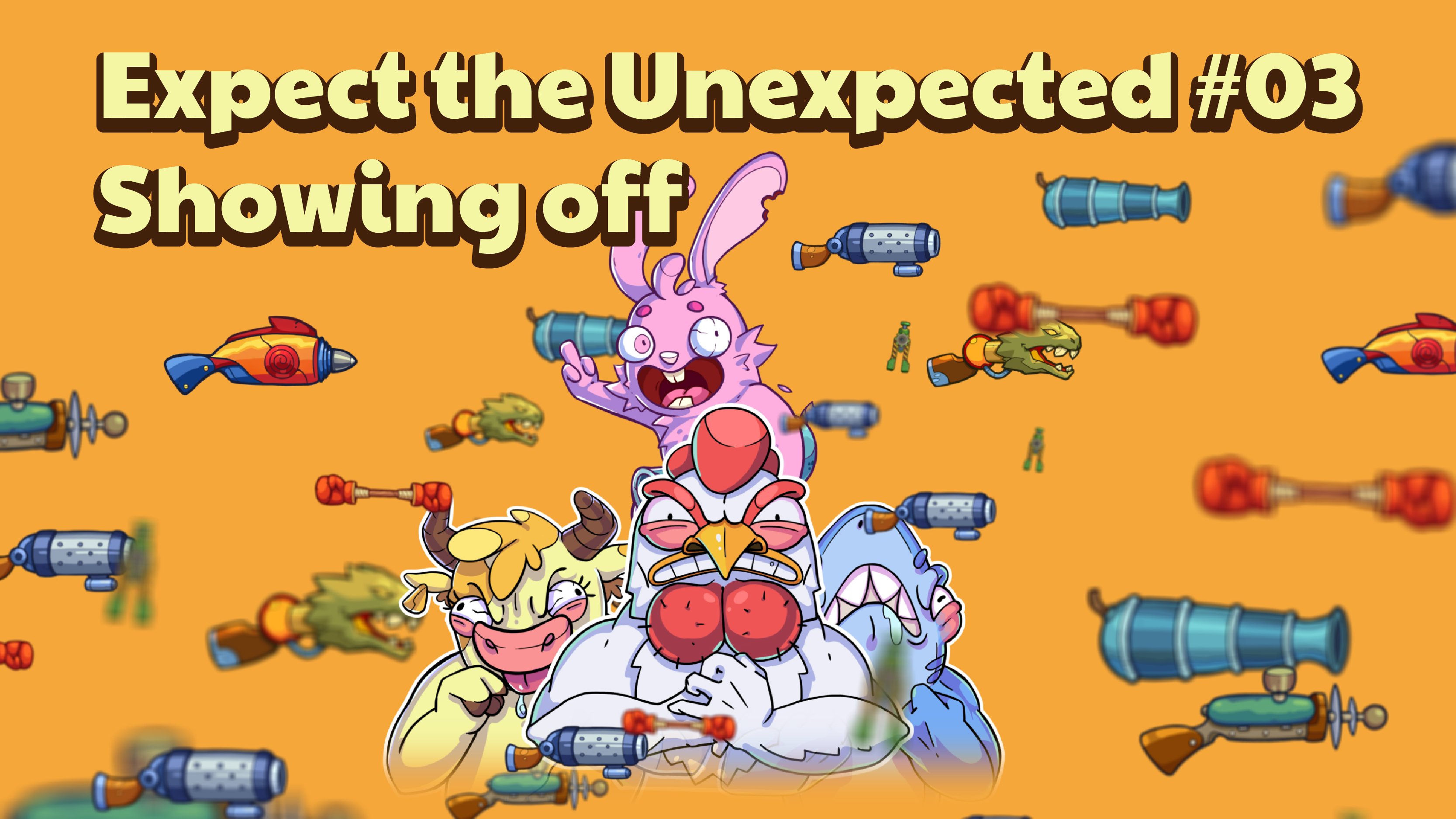 Welcome back to the Expect the Unexpected series! Don't forget to check out the first two episodes of the series before diving into all the tools you get by entering this bizarre show. In the end, you don't start watching your favorite Netflix series from the 3rd episode, right?

Oh yessss… The tools of mayhem, the blood messengers, the chaos machines! In The Crackpet Show, there is no easy route for finding the best weapon and sticking to it. You do remember that likes and weapons stick to you only during the episode you're currently in? So don't save for later. Just try to pick the best option for the current scenario!

When you start an episode, you have 4 primary weapons to choose from (by picking an associated class):

Pew Gun - Just a regular gun.Nothing special. Move along and kill some things.

Lob-o-Gun - Throws bullets instead of shooting. It's a feature, not a bug.

Each has its own strengths and weaknesses. For instance, Lob-o-Gun will be perfect for a room layout with lots of covers, giving the power of physics into your furry hands:

Okay, okay, you're here for the more crazy stuff, huh? Forget about drops from enemies (these are reserved for likes), and focus on finding weapon rooms. After finishing a stage of this kind, a weapon vending machine will spawn, giving you a random piece.

There are also elite room variants of weapons rooms (with a skull in the top-right corner), which increases the chances for elite rifles to spawn (marked with purple). Be aware, though, as you will encounter more deadly enemies and increase the risk of losing precious health.

You can also make use of likes and buy weapons at shops (the offer changes randomly) or even sell the current weapon for likes to secure a deal of the day! BTW, do you see a "mysteriously hidden" character in the top-left corner? If you consider yourself lucky, this might be the game-changer - as it rerolls the currently wielded weapon. It might be an epic one, making the upcoming boss fight a much less painful experience, but it can also give you a basic crap you don't like. No risk, no fun, huh?

So let's see three examples of the beautifully crafted tools of carnage, ready for your disposal:

Mega Rail Gun - An instant hit with very high damage, but also a very slow reload. Why settle for something normal when you can have it in MEGA version?

Melody gun - Fires more powerful bullets the longer you hold down the fire button. Don't release it at all, actually! Try to keep the rhythm to kill your enemies.

Fireworks - Decay into smaller projectiles on impact. A combination of beautiful colored flames and twinkling sparks. Can't wait for New Year's Eve? You hate New Year's Eve? Regardless of your answer, making use of fireworks bullets should bring you joy while crushing your opponents!

Weapons are not the only helpful stuff at your disposal. When you choose a specific class in the starting room, it is a combination of a weapon AND a special item.

Active skills could be more offensive (good old turret) or defensive (bandage recovering part of your health). They usually come with limited usage, though (per episode) and their own respawn, so the overall best strategy is to use them when sh&!#t hits the fan or when facing the boss at the end of an episode.

The primary special items are:

Anvil drop - Smacks an enemy with an anvil. Deals <color=#5bf9ff>damage and is quite funny.

Turret - Places a turret on the ground that shoots enemies with your weapon.

Bandages - An awesome healing package. Use to restore 1 health.

Taunt - Provokes enemies to attack you for a short time. Additionally, grants invulnerability during this period. No strings attached.

When you are a newbie, it might not be a bad idea to start with healing bandages because you will most likely get hit very often in the beginning.

Let's not spoil too much of the epic special items, but Call of Zeus is literally shockingly good! It strikes an enemy and stuns them. The effect jumps to nearby enemies. And it looks incredible:

When you finish an episode, you get trophies that are exchangeable for upgrades. This applies not only to weapons but also to perks and unique items. For example, a trashy pew gun on level 1 might become a perfect rifle at level 3, making it one of the best you can wield.

And yeah, it works relatively simply - at the start, everything is on level 1, and you can upgrade it to a level 3. And best of all, those upgrades stick with you, making you much more powerful ahead of more difficult bosses and enemies.

In the next episode of "Expect the Unexpected", we will cover perks, associated mini-game, and how to find the perfect combinations with weapons you currently wield!

Just in case you're just as cracked as we are, terminally online and not knowing what to do with yourself… We may be busy little bees, but you should follow these pages:

Our Facebook with news for you to check - Facebook.com

Our Twitter with jokes, gags and rofltastic memes - Twitter.com

Remember to add the game to your wishlist to secure the first row for the upcoming show!