How did we manage to use different controllers in Immortal Redneck? What assets did we use? We'll tell you!

There is some wars that no one will ever win: Pizza with pineapple versus pizza without pineapple, ‘Star wars’ versus ‘Star trek’, Sony versus Nintendo… And, of course, keyboard and mouse versus gamepad. We have acknowledged this issue at CremaGames and, although we can’t give a final word and decide who won in these battles, we can give you all the possible options to enjoy ‘Immortal Redneck’!

You may be a FPS purist and play ‘Immortal Redneck’ with keyboard and mouse, but if you prefer to use a gamepad, you’ll be available to do it too: Even if you want to change the controls through the game, you’ll be able to do it easily! Imagine that you’re playing with a Xbox One gamepad, but you want to change something in the Options menu with the mouse: You just have to touch the mouse to change the control again!

Although Unity has its own input manager, we decided to go with other plugin: Rewired, a system that works with native input. We needed a system which allows you to change gamepads dynamically, being able to connect and disconnect really quickly. Rewired, and therefore ‘Immortal Redneck’, will allow the support for a lot of gamepads, both officials and extra-officials. With Rewired, the buttons of the controller you connect will appear in the game without any lag or quality loss, as the system will recognize it immediately.

Now, this is a little bit difficult to explain, but we have to try it. Try to understand! Open your ears!The asset doesn’t work with buttons, but with actions. We’ll try to explain it better: Rewired links actions with buttons changing our way to work. We ask Rewired if the player wants to do an action that has been mapped by default in a series of configurable buttons, not if it touches the button itself. You can select a different button for each action, or even the same button for two or more actions. Therefore, the action associated to each button will change depending on the action map you’re at the moment (for example, while you’re playing or while you’re looking at the Menu). 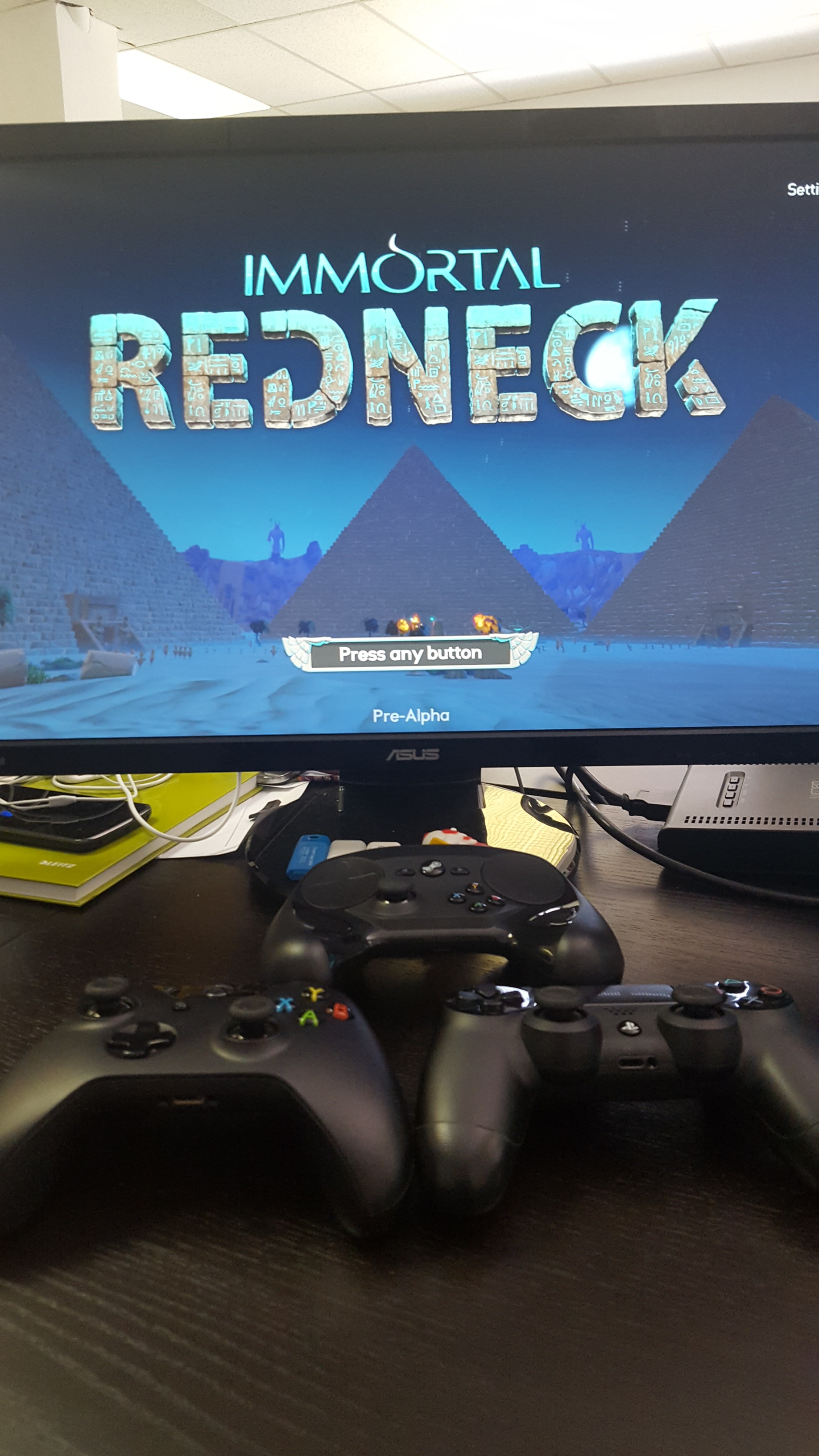 Probably you’ll have one question: How are we going to make a difference while playing with the gamepad? We use UFPS, a FPS asset that we modified (as UFPS doesn’t work with Rewired, but with the Unity input manager instead) and that offered us changes in aiming sensibility and the possibility to accelerate (or decelerate) the speed of the gamepad. Although UFPS and Rewired helped us a lot, playing with gamepad was, still, a great handicap, so we created an auto-aim system. But this is a story for another Devlog. We’ll talk more about UFPS and auto-aim in the next devlog, so, if you want to know more about how the ‘Immortal Redneck’ experience is going to be on consoles, stay tuned!