Heyo! This week we take a look at how the level editor has been coming along, we rename the blog, talk about reworking a core mechanic, and have a bit of management structure stuff in there too! How exciting! Not too much of that last one though, so don’t worry.

The Hands That Shape The World (Will Be Yours)

Heyo! Welcome back, dearest and most handsome of friends, to the Handsome Dragon Devlog! Now, you may have noticed that’s a new name for this devlog, since up until now it’s been called the Dyadic Devlog. I figure since I usually use this space to talk about mostly Dyadic, but also the other happenings of the team, this name makes much more sense. But where are my manners? I’ve yet to even introduce myself. I am the ever handsome Jack, Glorious Leader Creative Director for Handsome Dragon Games. And, as I mentioned above, I’m here to talk to you about what’s been going on with the team.

This week’s been quite the exciting one. We’ve undergone something of a structural reform within the team, taking a new look at how we’re approaching development and making some major alterations to improve it. Now, I’m not going to bore you with all the details, but trust me when I say Dyadic is going to start coming along better than ever now. Oh, and I must give credit here to Corey for coming back from PAX with enough energy to galvanise the rest of us as well. Many of the ideas for reform were his.

Now, onto more game related matters. One of this week’s main focuses has been getting the level editor operational. This part of the game is also Corey’s brainchild, so he’s been going at it with full force this week. However, the more he dives into it, the more aspects he’s realising he hadn’t thought through entirely. But, they’ll all be sorted out in due time. At the moment he’s been working on putting the various pieces into the scene and moving them around. Gotta start somewhere.

It’s not been with its problems though.

Alongside Corey’s work, Callan’s been there putting together the various UI elements as well. We’ve had extensive discussions about how to separate the various aspects of the UI and how to present the player with the multitude of objects they can select from to build these levels. Currently, we’ve settled on diving all the objects into 9 tabs, 3 parent tabs with 3 sub-tabs in each. This way, users can find the various pieces of structures, puzzles, and decorations that they need, without too much digging around. Hopefully. We’ll need to do a lot of testing for that.

Whilst it’s all placeholder art, the general structure of the tabs is laid out.

Aside from the level editor, I’ve been working on reworking one of the game’s core mechanics. The jade statue. Currently, I’m trying to deal with an issue that’s been plaguing us from pretty much the beginning, and which we still haven’t been able to fully resolve: The players not valuing the statue. Whilst I’ve yet to nail down a definite solution for this, I’ve been working through several possibilities. One rule which I have nailed down, however, is that the value a player gains from the statue must be dictated by when they have it, not simply if they have it. No doubt I’ll have more news on this for you next week. 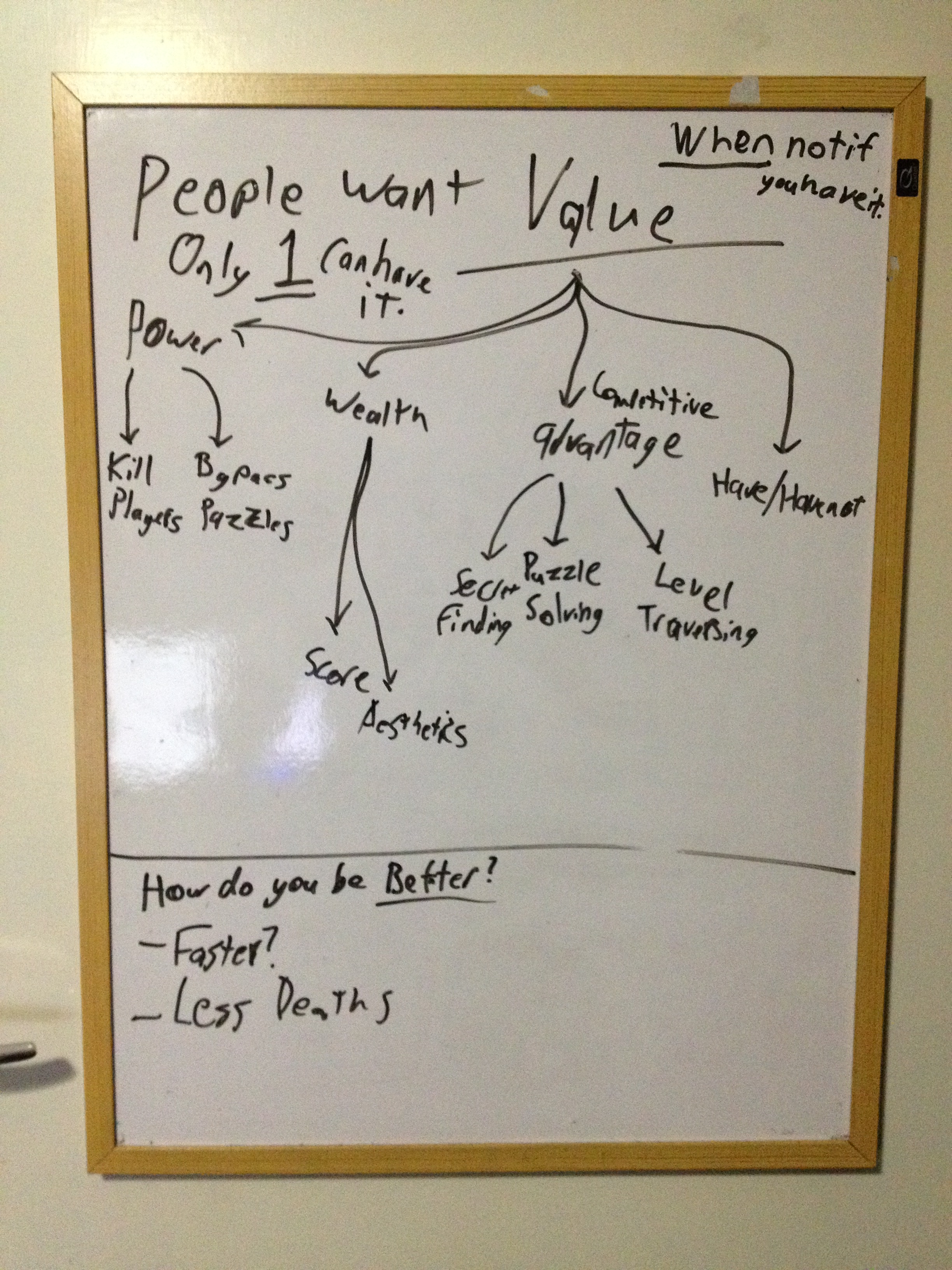 Some of the paths I've been looking at to resolve this.

And that just about covers everything major for this week. In the coming weeks I’ll have more music related news to tell you, and some new artwork or animations to show you. As for exactly what those new things are, well…time will tell.