A summary of things done since the last update, and some screenshots.

Hi everyone, just wanted to check in with you since it has been two weeks since the last news posting.

The updates I uploaded to Desura two weeks ago for the Linux/Windows branch are now finally live. We're still on stream for a full release in December. This contained one or two bug fixes and added a temporary game launcher screen.

During the last two weeks the major things worked on were:

1) exploration content was added to the exploration framework and tested extensively.
2) The trading content was added to the trade engine and a good round of testing found and fixed some lingering bugs.
3)Revisions to the story and screenplay in the game were made and extensive work was done on the save system.
4) A lot of other work was done to all sections of the game, fixing, polishing where was identified while testing the systems above.

A lot of assets were completed. There are only 2 alien race assets left to complete and some other art work.

I am still hoping to release a full beta to Desura or in other words update the alpha on Desura to a beta version of the full release before November ends. Hopefully the feedback I get can be implemented before the full release to the public in December. Since the game is going to be available on a number of other websites at full price.

Regardless, your suggestions and feedback will be added to the game post-release, even if it doesn't make it into the first public release.

Our little alpha demo has passed one hundred in sales on Desura. It's not bad for a very early version alpha for a very discreet and niche game.

The remaining system to be worked on is the universe life frame work. A lot of work has already gone into it, so it isn't as daunting a task as it might sound. Aside from that, a significant amount of testing and polish needs to go in. The game is very indie, but hopefully a successful first title can lead to sourcing more music and sound effects and that type of stuff for the other 2 games in the series. Since this first release depending on how it goes, is meant to be the fist in a three part story.

Below are some screenshots of the player engaging several alien vessels in some instances. (forgive the test buttons scattered around). As usual I won't be saying which alien ship is which, you'll find out in the game! 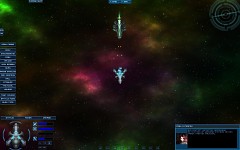 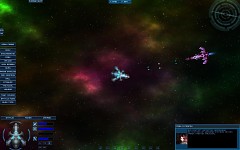 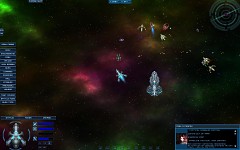 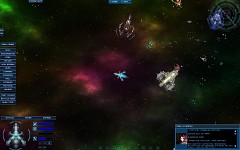 Thanks for reading! Don't forget to share the game with your friends and tell them it's soon ready! Starflight fans, Distant Worlds fans, Star Control, Escape Velocity, anyone who liked those games should like Void of Darkness.