Hi everyone, the game has been updated to version 1.0.7.3 with 1.0.7.4 due out tomorrow with some enhancements to user experience. All reported crashes have been fixed and I have had no reports of crashes since 1.06

As I had said before, post release updates would be released based on user feedback and other general enhancements to user experience. The majority of changes in the patches now reflect that.

Here are some screens from the release version:

Engaging a pirate vanguard at a pirate base: 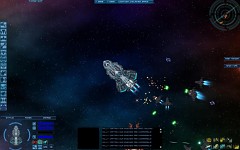 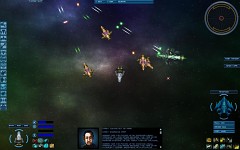 Skirmish between player, pirates and U'Guul: 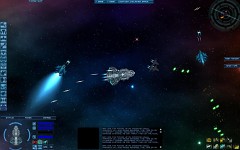 Encounter with Pirates: (Demanding Fuel, to let you go) 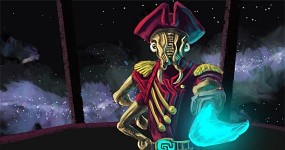 Encounter with the evil U'Guul Race: 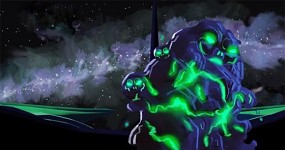 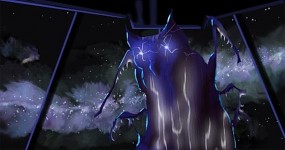 Hi everyone, this is footage from the improvements and fixes done to bring the game to version 1.04, currently Desura is still at 0.8.

A trailer showing gameplay footage from the beta, which has been uploaded to Desura but not yet made available for download

A summary of things done since the last update, and some screenshots.

news on patches and some alien concept art, and other tidbits.

Another abandoned project I guess? You can barely find a mention anywhere on the net let alone somewhere to download. The website linked is for a completely different game...

I'm a senior CG professional in the games industry. I grew up with Starflight and it's been a dream of mine to someday remake the game and improve/expand on it. If by any chance you're interested to collaborate, or talk about other options, please contact me at: azmimohdamin@gmail.com. Hope to hear from you :)

I've just purchased the game and played it for not more than 20 minutes tops. (v1.0.75)
And I've already had several crashes and a few bugs. (Missing character/ship portraits, etc)

One way I've found to repeat a crash is to scan the planet you start beside, then delete some
of it's text that pops up, then scan it again.. crash.
(You shouldn't be able to delete in-game text like that)

Despite these issues I can see a gem here, and I can't wait to play it further when I'm
much more in the mood for it than I have been tonight.

P.S Already re-downloaded several times and repeated the same crashes,
so it shouldn't be a corrupt installation or something.

Hi Vince, you listed the steps to reproduce the crash with the planet, what about the other crashes?

Also you should download 1.0.7.6 from indieDB, just so were are using the same version. 1.0.7.7 was scheduled for 15th January but it should be ready sooner this weekend.

Thanks for the feedback.

The other crash I had seem to be a one-off.
After recruiting my crew I hit the crew management button and the game crashed.
I haven't seen it happen again.

The character portrait thing I have recorded on twitch
If you go here:
Twitch.tv
and skip to the 11:00 minute mark, you'll see Drew's portrait is missing.
I think it fixes itself after awhile though.

I always like to have the newest patches in games, I didn't realize there was a 1.0.7.6
until last night when I was browsing, i can't remember what, your site or something.
But I couldnt' seem to find a download for it, I'll look again though.

And sorry if this feedback seems harsh.. It's just the game seems to good and
these bugs are kinda getting in the way of my enjoyment of it.

Oh one other thing I forgot to mention is about the ship portraits thing.

Not sure if it's the portraits or what, but when scrolling through ships to buy
the scrolling just feels off.

I'm not sure if i'm scrolling through multiples of the same ship, or if it fails to scroll
or what, but it feels like sometimes when I click the arrow it scrolls properly and
sometimes nothing happens.
(leading me to think some ships had the same portraits originally)

Hi Vince the destroyer type was removed from the game. It caused you to have to click twice at reaching its old slot. I fixed that in .7.6. Going to try reproducing your other issues before I finalize 1.0.7.7 which should be out tomorrow. The link to the patch Gamefront.com

I don't think providing feedback is harsh, your feedback is very useful! Only way I can fix certain things, because working on such a game by myself is extremely difficult in the testing department.

It is an installer, point it to the void of darkness install folder.

Someone rated this a ONE?! You HAVE to be kidding. I think that Desura needs to have a requirement for writing an actual review if someone rates a game so low; we are required to write them when we award a TEN.

Anyhow, I give this very good game an "8" because this isn't the full game. It does crash a bit, but, the potential is there for something very special. The developer has been patching and working on content additions.

Twitter
Tags
Embed Buttons
Link to Void of Darkness by selecting a button and using the embed code provided more...