We have done quite a big progress on the game for the past week. A lot of animations for First Person are finished, the UI has been updated and the Campfire model changed to a custom one.

For the past week, quite a lot of progress was made on the game, so that's actually one of the reasons this update kept getting delayed as we were focused on the game itself.

We've had a few more internal play-testing sessions this past week which have helped us a lot. The sessions have been great because it gives everyone a chance to play and see the latest assets that have been added to the map. Since each person is working on their piece of the game, they generally don't see what the others on the team are making and working on until the play sessions. This way everyone can see how all of those pieces are coming together.

Almost all of the weapons now have First Person animations done. The only items that are left are the frag and flashbang grenades and the baseball bat. After that we can then start working on polishing up any that may need and work on more "filler" level animations - eating, drinking, constructing items, etc.

Even though the First Person is coming along great, we are still struggling with getting the Third Person animations done, so a lot of work still needs to be done in that area. As a result, in our gameplay videos you can see that a lot of the time people are just carrying the weapons rather than actually using them - aiming and firing, for example.

The developer working on the UI did a lot of work on it this last week, but there are still some key areas that need to be implemented and fixed - most notably the in-game menu and the ability for any options you pick, like changing the screen resolution, to take effect. Right now we can see all of the sound and graphics options, but they are not hooked into the game yet to be used. I believe I mentioned it earlier, but we are going to start with more broad options for the graphics and sound and then go back and start adding more specific options as they are needed and we have time to implement.

A new modeler has been working on replacing the placeholder campfire model (a car tire) with a custom model. I'm including an image at the end of this update to show you what it currently looks like. When you first craft the campfire all you see are the rocks and spit. When you add wood to the campfire then it appears in between the rocks and then you can light the fire on it. You can then add uncooked meat to the spit and after it's cooked it will change to the cooked look. 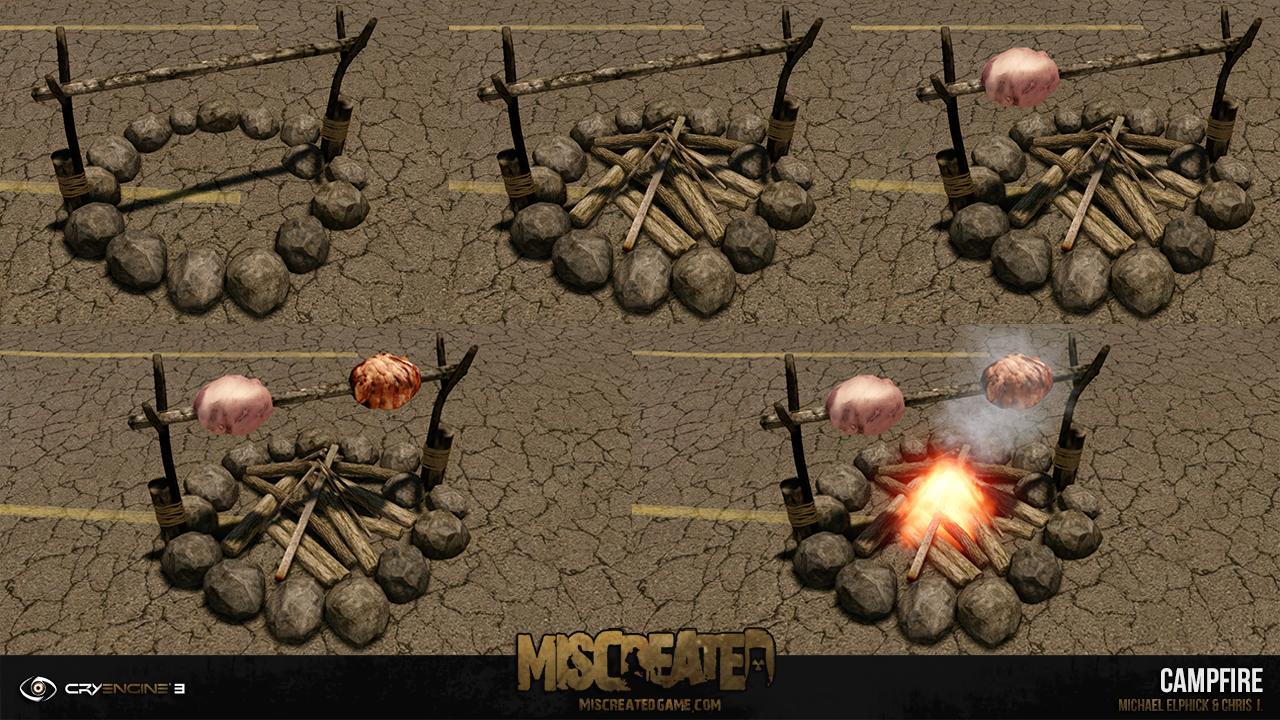 Thank you for your feedback.