A behind the scenes look of the planning and design of the new Sunset Harbor area currently in development.

We've mentioned a few times during the weekly update that we have a larger project in the works. Some of you know what the project is and some of you may have absolutely no idea. I wanted to discuss some rather large changes coming to NuVera Online and give a bit of a behind the scenes look at the design process we’re taking.

We have mentioned in previous updates that the added road in Sunset Harbor was only phase 1 of a larger construction project to bring in more roads and make the area more friendly and fun for vehicles to explore. After taking a good look at Sunset Harbor and our plans moving forward we decided to change that plan a little bit. Instead of modifying the existing Sunset Harbor location we are currently working towards a complete remake of the area from the ground up.

When I say from the ground up I mean exactly that. We spent some time and researched the pros and cons of replacing the existing Sunset Harbor terrain and found that by replacing the terrain we had the most freedom to execute some of the larger plans we had in mind. We also knew that the original Sunset Harbor was not planned out the best way it could have been which meant we needed a rock solid plan in place for how we would design and build the new Sunset Harbor.

The first step was to figure out exactly what we wanted this new area to look like. For me this was all about the landscape. We wanted it bigger and we wanted it a lot more interesting visually. We wanted plenty of places to explore and interesting things to see. After going over some rough design ideas we also agreed to make it an island so as to better encapsulate the area and provide more clear cut borders.

After tinkering in several programs we ended up taking a look at World Machine which is a great program for generating terrain height maps. This allowed me to quickly iterate through several different terrains and find a good starting point for what this new area was going to look like. The other benefit of using World Machine was how it generates more realistic looking terrain features over manually sculpting a terrain. 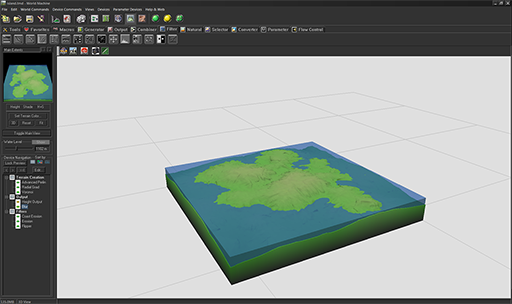 Making the area larger was very important, but naturally the balance there is ensuring we have enough time and content to fill a much larger area. The new island at this stage was shaping up to be several times the size of the existing terrain for Sunset Harbor and we were really excited about the possibilities.

We had already done some terrain sizing in the Unity engine to get a feel for what was going to work so we just needed to pull in the generated height map from World Machine and see how the terrain felt.

Looking at the new island map it was easy to not realize just how much bigger the new terrain was, but as we can see from the below illustration it was quite a bit bigger.

As we can see there area is quite a bit bigger and offers some great opportunities for exploration. 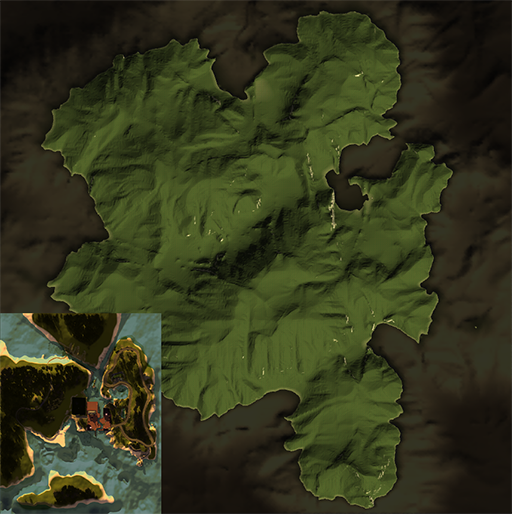 At this stage we were happy with the terrain and agreed that this was a great foundation for the new area. With that step of the planning in place it was now down to the details. We had to decide what was the best way to proceed in filling this new land with awesome content.

There were two parts that needed to happen next.

1. Determine what points of interest we wanted in the new area and where they were going to be located.

2. Layout the road network and how the avatar would get to these locations, either by vehicle or on foot

We started jotting down all sorts of ideas on various interesting features and points of interest we wanted on the new island. This was based on what 3D assets we already had, what we could afford to spend time in making or what could be acquired. Once we laid out all of the points of interest on the map we started to get a better idea of where we needed roads.

The design of the roads was probably the trickiest part of the whole endeavour as we wanted to ensure we had interesting roads that worked well with the terrain, but couldn’t afford to spend a lot of development time integrating in a larger road network. This lead to the idea of breaking down the road project into three parts:

1. The main asphalt roads which would be actual geometry.

2. Gravel roads which would extend off of the asphalt roads, but would be painted on the terrain.

3. Walk paths which would be extended off of the other two roads and intended for just the avatar. These too would be painted on to the terrain.

We also decided that, given development time allotted, the main asphalt road would be a closed loop that would go around the island which allowed for our gravel roads to easily extend the road network without worrying about how to properly tie in fancy road intersections. 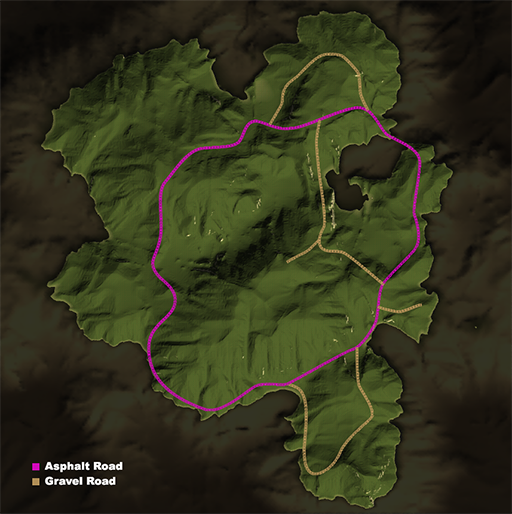 Once we had the road map in place we could start building the main road. I wanted to ensure we got the main asphalt road in first as many of the features would be built around the road. We could have worked reverse of that as well, but getting the road established first felt like the right way to go.

As we did with the existing Sunset Harbor road we decided to use EasyRoads3D to build our main road. It’s a great tool that allows us to better visualize the road and have it flow naturally with the terrain. 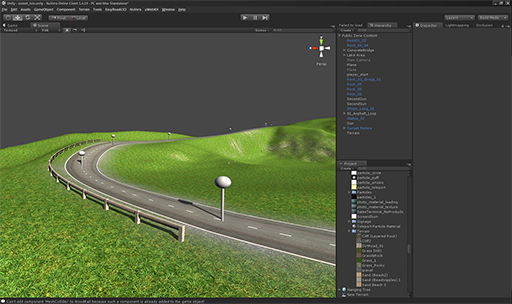 After several iterations of road testing we have the road setup the way we wanted it. This is pretty much where we are at right now. From here we can start work on building up the various points of interest such as the new plaza, lake lodge and a lot more.

As we continue to progress I’ll be covering more of the development so that you can get a better idea of what it is that we’re doing and how it is that we do it.

Until next time... have fun out there!