Starting today, there will be a weekly dev blog that will keep you up to date with the production of the game. Next is the Developer's shack. In some developer blogs one of our team members will write a little piece about some of the work they are doing, to give you some more detailed information on Battle Cry of Freedom. This week our main programmer Maxim "Vincenzo" stepped up to explain a little about how we are providing the huge amount of players we have promised!

Well, that has been one hell of an exciting announcement! The feedback and excitement we have received this week has been overwhelming, and we are proud to say that in just one week we have raised enough to hire our musician to start recording! So be ready for some awesome Drum/Fife/Trumpet and Fiddle tunes coming your way!

Starting today, there will be a weekly dev blog that will keep you up to date with the production of the game.

Next is the Developer's shack. In some developer blogs one of our team members will write a little piece about some of the work they are doing, to give you some more detailed information on Battle Cry of Freedom. This week our main programmer Maxim "Vincenzo" stepped up to explain a little about how we are providing the huge amount of players we have promised!

I know it, we are insane!, 500 players... It seems impossible right? Well In our first dev blog we will explain some concepts on how we will get this to work.

When designing this network engine we had the following requirements:

With these ideas in mind we went to the drawing board.
The big bottleneck for any multiplayer game with a lot of players, is the server. Figuring the average server would have an Intel Quadcore, and a 100 mbit uplink, we put the requirements for our server to half of these specifications, so a host could run two fully crowded servers on one server box.

First of all we should understand why high player counts are such a challenge, the reason behind it is the exponential amount of data.
In the average FPS game, one player generates about 0.5 Kilobytes of data per second while he is playing the game, this information has to be sent from the server to all other players.

Only send data when it is actually changed.
A player basically runs a simulation of the world. He gives input such as movement, attacks and other interactions. This input is sent directly towards the server, which processes the input and applies it to the game. These changes are then further sent to the other clients.

Most network engines simply send a constant stream of the latest state-data such as buttons being pressed, directions players are looking at and movement data to all players, for each player, as you might have guessed this creates a lot of redundant data.

In our design we only send changes, for instance if a player turns around, only his turning is sent, and once he stops looking around no further messages are sent for that player, at least until he interacts with the game world again. Same goes for movement, as soon as a player holds forward, only that is sent, as soon as he lets go of the button, that is sent.
This can save enormous amounts of data, because most players are usually not constantly moving/attacking/looking around or interacting with the game world.

Compress data, lossy, to acceptable values.
As you saw before, the amount of data sent is important, saving a single byte per player per network message could come down to 500 bytes already which is half a kilobyte! As such we apply heavy compression on data send from the server towards the clients.
For instance, a player looking around with his mouse moves around 360 degrees. Normally storing the rotation takes a floating point value of 4 bytes...

A single byte can store up to 256 unique values, as such if we map 360 degrees towards 256 values, we might lose precision of the exact rotation, for instance a player might be 1 or two degrees off than what he is looking at in reality, but this is neglectable and virtually impossible to detect for a player looking at another player. Thus we have just saved 75% of the data!

Headers are costly, don't send data too often.
Sending a single network message from the server towards the client takes headers, headers are simply information that routers use to know where a packet comes from and where it should go to.

A average UDP header comes down to about 58 bytes of data, on top of that we add our own 10 bytes header which tells us exactly when a packet was sent and where in the game it should go. As such, sending a message without any data at all already takes 68 bytes of data... thus its very important to send as few messages as possible.
In our design, we basically save up all the data that needs to be sent out to clients, and send it out at a steady 10 times per-second rate, this way we use the headers as efficiently as possible without creating too much delay.

Results.
So, that is well and dandy, but... how does that end up then?
Well, basically a player data packet is between 0 and 7 bytes, depending on the player giving none till all kinds of input. the average during my testing, with an extreme amount of movement changes/strafing and turning around a lot, is around 3 bytes which can be seen as the worst case scenario, as I don't expect all players to move like that all the time..

We plotted our engine upstream with different player counts in comparison to the average network engine in the following graph: 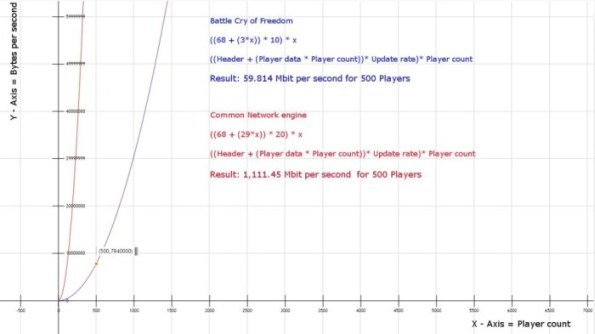 In Conclusion.
In theory, we could reach much greater player counts, so long as one uses a very good server, with for instance, a 1000 mbit uplink! We announced a player count of 500, as this is what we are confident we can provide, given the current design and previously implemented network engine tests. Progress on the network engine has been great, most of it is working and implemented, We have the confidence to start the live tests soon. For now, using random generated player data yields great results.

If you didn't realise we were raising money to complete this project head over here to check out our reward tiers here.

We will see you next week!

Nice! Destructible terrain is one my favourite aspects of a game.

Oh and it would be also cool if some of the maps were randomly generated :)

Very informative and yet easy to understand. I love learning what's happening behind the scenes.