Currently studying IT at the University of Piraeus, Greece. I'm pretty interested in game development and FOSS, and hope to contribute to both. I'm not very good at programming, but I believe making games is an efficient and fun way to improve one's coding skills.

This is my full review for the indie game Kyoto. Since there's a 2000 character limit on reviews, I post my slightly bigger review as a blog post:

Although more an audiovisual experience than a game in the traditional sence, Kyoto can still be considered as an example of interactive art.
The entire game takes place in a small scene consisting of a moon-lit rock with some reed and a tree growing on top of it, amidst a quiet lake. It is a very calm setting, with every object being interactive and responding to the mouse as if it were the wind. The great yet subtle graphical effects are probably the most outstanding part of the game. Most of them aren't really noticeable on the first time, which ensures that the soothing atmosphere is only enhanced by them. Everything visual, from the effects to the color palette, makes up for an incredibly calm experience.
The sound only complements this feeling, with the subtle sound effects being the equivalent of the graphical effects, and the smooth soundtrack enhancing the general feeling of the game. 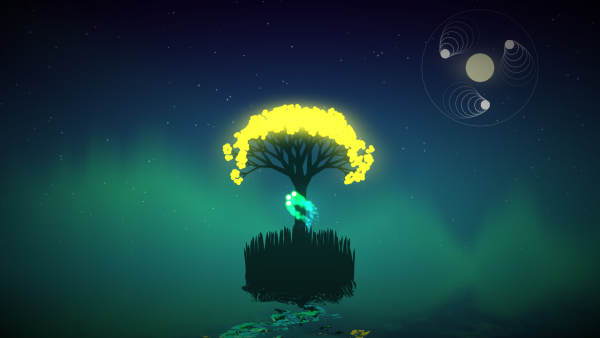 The gameplay is a very basic one: You collect falling stars that appear on the night sky and place them into the scene, to certain objects. Later on, a type of chords make the audiovisual connection more noticeable, and the gameplay generally changes at each stage of the game, as does the environment - although without ever loosing its atmosphere, even in the transition. Though it's not always clear (and never obvious) what to do next, it seems like the experimentation is something the developer wants the player to do, in order to take teh game world in. The game is fairly short, and even a player who takes his time to appreciate the experience (which I recommend you to do) will finish it in half an hour or less.
The question here is, whether it is fair to rate the gameplay compared to other, more traditional games. Kyoto is an interactive audiovisual experience in its own right, and this label is far more suitable than "game". But since this is a game-centered site, I will rate it as a game.

As an experience, I give it a 9/10 (Amazing). This is a wonderful, soothing experience that can be enjoyed by anyone, with some great visuals and audio, and stays consistently calm throughout the whole session. A fullscreen option would enhance the effect even more - and it's odd that the developer hasn't included such an obvious choice - but on the whole the developer should be commended for creating a very strong atmosphere within the narrow frame of this setting.

As a game, I give it a 7/10 (Good). The gameplay is fairly limited, both in overall time and in the gameplay itself, and the game's goal isn't obvious (even at the end). But then again, this might be a good thing, and just playing around and embracing the game's atmosphere is surely more rewarding than progressing to the next stage. It just doesn't have enough content to make this as enjoyable a game as an experience.

Save MERP! And a note on strict IP

6 steps to play with player's mind - some thoughts

The Humble Indie Bundles or Humble Bundles are a series of game bundling experiments that allow users to purchase collections of multi-platform DRM-free...

"but I believe making games is an efficient and fun way to improve one's coding skills."

I think so, too! Everytime I need to learn something new, or when I want to try out a new idea (architecture) I start writing a small game :P Creating small games is a great way to practice.

I'm new to IndieDB and ModDB and wish to invite a few people (random people picked from the online list lol) to view my game and start generating a few opinions, do you mind taking a quick look? The game is called Arkanius. Thanks, Artisan Codesmith. :)

Thanks for watching the Questverse project Pabo!

PS: About your article above, ragnarok online was exactly like you said, not much content, just the next level or new item created by the developers.

Well, it seems like an interesting project, and if I can learn something along the way, even better! Also, thanks for checking out my blog.