Time flies- can you believe that Bushido has been in development for a YEAR already? This week we look at the types of environments you’ll see in Bushido, from mountain-top Buddhist temples to castles under siege. We’re also giving our fans the opportunity to tell us what type of maps you’d all most like to see!

Wow, can you believe that Bushido has been in development for a year already? For anyone not in the know, our game started as a TC mod for Chivalry: Medieval Warfare (here’s the original forum thread: Tornbanner.com). We’ve certainly come a long way in that time and feel that we’re just about starting to see the light (Green light?) at the end of the tunnel. 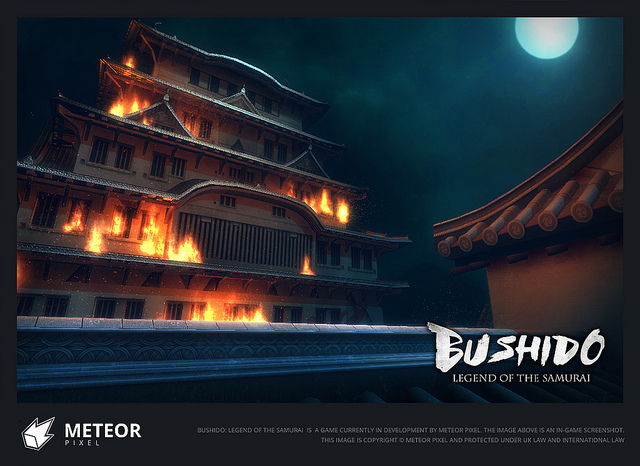 This week we’re talking about the many and varied environments that players can expect to see in Bushido. Bushido is set during a fictional period in Japan’s history, loosely based on the Sengoku period (15th to the 17th century). Although many aspects of the game are firmly grounded in history, choosing a fictional period allows us some flexibility when designing architecture, weapons or armor. We made this decision because we thought people would probably prefer a more ‘cinematic’ experience rather than a ‘Feudal Japan War Sim’.

So far we’ve got 4 major environments nailed down. We’ve shown some of them already, but wanted to use this opportunity to show off our new ‘Castle Siege’ map [above] and a work-in-progress shot of our ‘Buddhist Temple’ set in the mountains [below].

Japan’s rich history and geology provides us with a varied and exciting palette for crafting new levels. These shots show off just a small portion of the range of environments we’re hoping to include in the final version of the game. 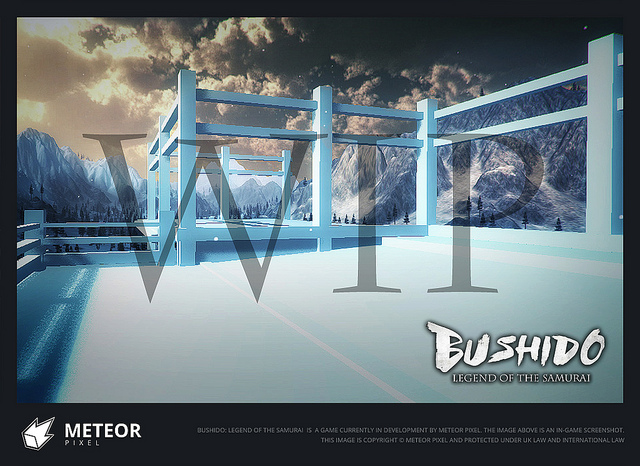 We’ve also be posting some screenshots of our newest environment in the very near future- that being our Dojo interior (which is a little too ‘WIP’ to show off at this point). This interior level also serves as the setting for our Character Customisation component, which we’ll be doing a video on soon.

The programming team have been busy transforming our FPS prototype into something that actually works/looks like a real game! They’ve also made some progress on implementing ‘sliceable’ props, such as Bamboo or paper doors. Not every object in Bushido will be able to be cut in half, but certain elements of the level will be destructible- allowing the players to block paths or open up new areas.

We certainly aren’t aiming for anything as grandiose as Battlefield 4’s ‘levolution’ mechanic- rather its just another way we can enhance the overall experience and help the player immerse themselves in the game (after all- what kind of paper door could stop a fully armored Samurai warrior wielding a No-Datchi!!).

A lot of these features are still in the very early stages, but we’ll certainly be able to include it in our KickStarter demo. If you think these ideas sound good/bad then let us know using the comments section below- we read every comment and genuinely appreciate your feedback.

That's it for this week - check back soon for some updates!!

The ideas sound good. Really good..! Can't wait to throw some money for you when the kickstarter campaign is up.

Do you plan a backing at your homepage with PayPal? Screw KickStarter for not having PP :/
Anyway, great news, keep it up! Fantastic content!

I´m sorry I dont get what this is anymore. Will it be a game by its own with the engine bought from dudes that made chivalry or will it be a mod for chiv ?

They are building this beautiful game with the Unity engine from scratch and may convert textures into a mod pack for chivalry when they find time.

As per the comments below, Bushido is now a stand-alone game being developed in Unity as opposed to the UDK. We no longer have any affiliation to Chivalry!

Sounds perfect and all the artwork until now is epic,nice job guys!
You know my preference for "total realism" but as you do you should go for the general public.
The sliceable object part sounds awesome!
I would just like to say some thoughts i had regarding some gameplay mechanics,i don't know about the others but i liked more the way you can keep your weapons ready-"armed" to hit like in mount and blade what i mean is when you press the button to hit but not release it you should be able to pull back your weapon (for example the sword raised high animation) and then release the button and finish the hitting animation,this gives a tactical advantage.For example when you run from someone you could ready your weapon and then turn back and hit him.and there are many more circumstances.Also when you block a hit i think you should break your defence unlike in mount and blade,that way a deflect which is historically much more common would be simulated.
Something else that would be helpful would be quick commands like in red orchestra 2 .That would be especially useful for formations command the same way like in mount and blade for example you have a command for spear wall which other players see and might join.
Thanks again for your hard work guys.I hope for the best for this game!