The unique features about SugarMill. You can vote SugarMill now on Greenlight. 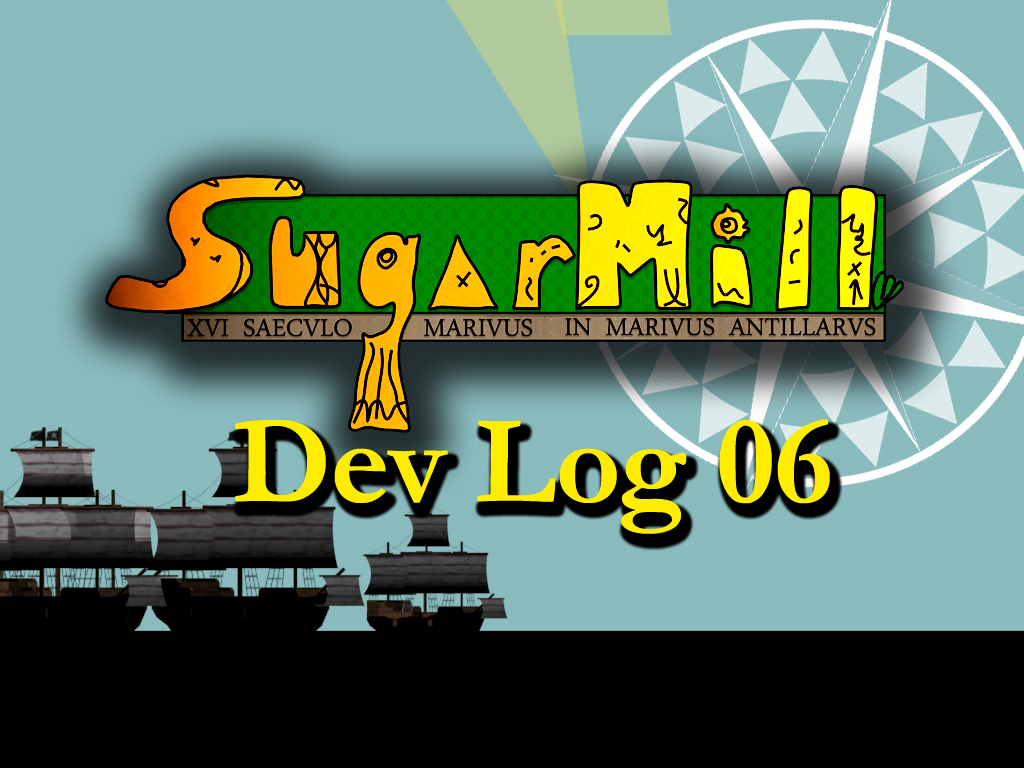 First thing I would like to announce SugarMill is now on Greenlight so you can cast your vote!

What is unique about SugarMill?

All measurements in the game are as real as possible. All KG or Lbs occupies a volume. A 100Kg of gold will occupy less volume that a 100KG of wood as the gold is more dense than wood. Formula: Volume = Mass / Density.

All buildings that have and use storage will measure how full they are as the volume in the storages fills up. In 1cubic meter you can fit 1000Kg of gunpowder but only 100Kg of wood. 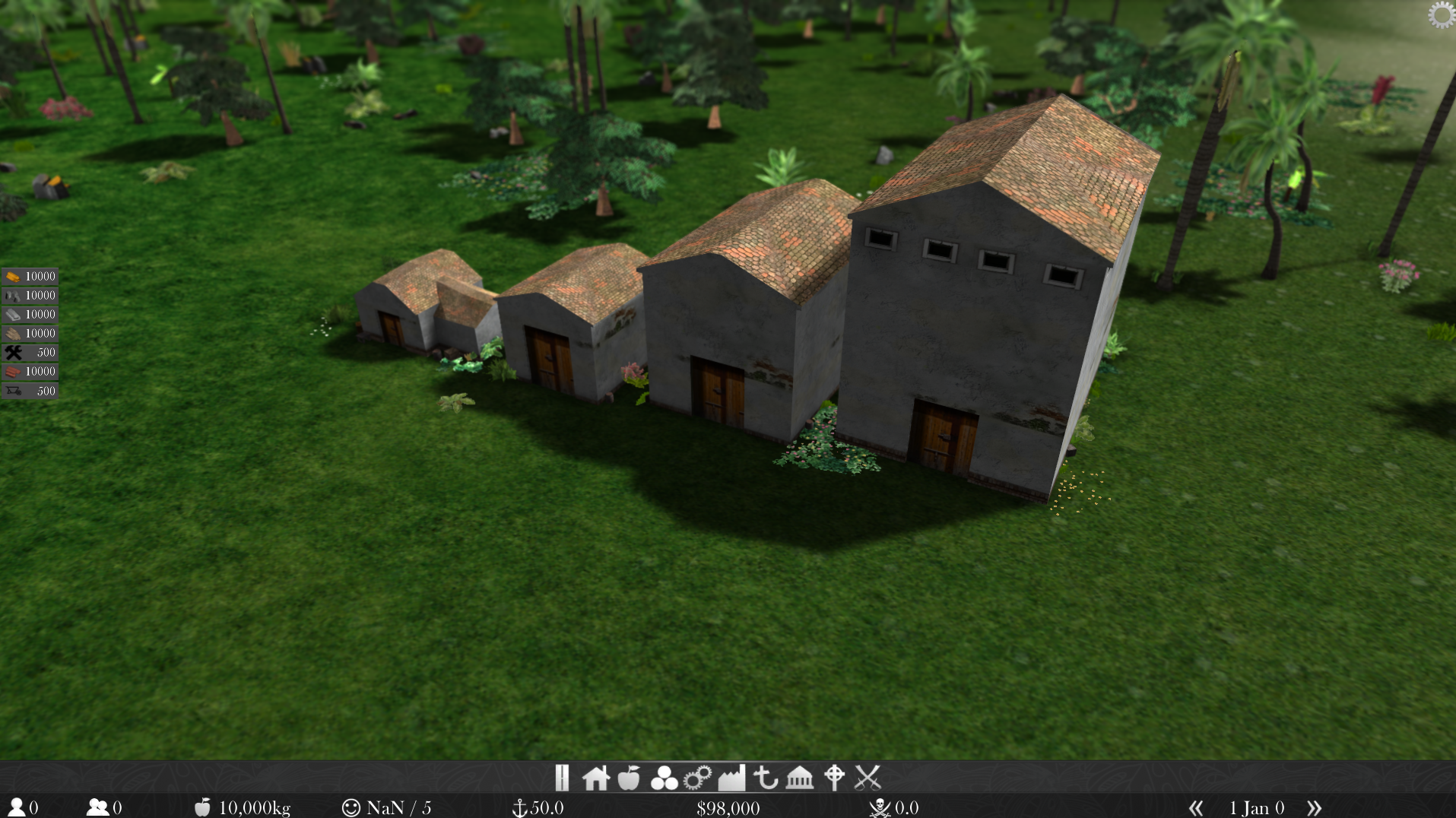 There are 3 different types of houses in SugarMill, bohios(shacks), wooden houses and brick houses. The houses will affect the happiness and the amount of kids a couple will have. In a bohio a couple will always be unhappy and will have a small chance of having a maximum of 1-2 kids as this places are really damp and cold at night. In the Caribbean latitude, it rains a lot and at night time gets very cold. Bohios will be easy to build, you roughly will need 100Kg of palm leaf and 200Kg of wood to build it, on the other hand building a brick house will be much more difficult, roughly you will need 5000Kg of brick, 500Kg of wood, clay, roof tiles, and some stone. However, on a brick house families will be happy, and will have a good chance on having a maximum of 1-3 kids. 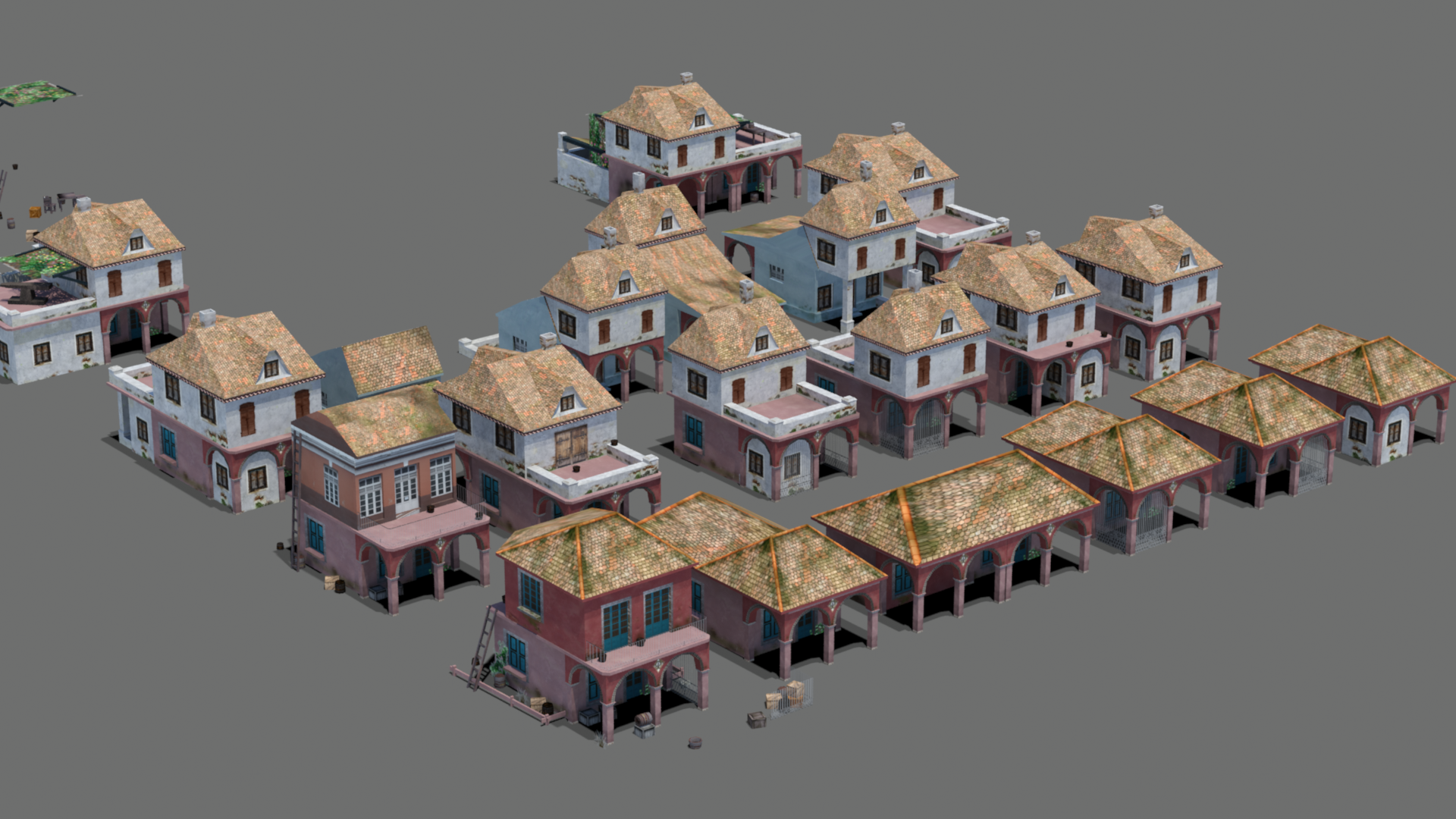 A unit in game will be real. Unit used to each product is weight. For example if you want to build a fort to decrease the 'Pirate Threat' you will need a roughly 20,000Kg of Stone. Also in game you could change from Metric to Imperial units.

It was hard to be away in the Caribbean and have a thriving village at the same time those days. Therefore as you village gains name with the 'Port Reputation' and as your gold, silver and diamond reserves increase the pirates will pay closer attention to your town. If the 'Pirate Threat' indicator goes over a certain score depending on game difficulty you will die and therefore lose the game.

As your settlement is fairly new and no one knows about it, you get little to no attention from the ships and convoys that pass around you. With a Port Reputation of zero roughly your port will get a new ship every 10 years. Increasing the port reputation is going to be one of the challenges of the game as you keep your people happy and economy stable.

You can increase the port reputation in many ways: Emigrants, Lighthouses, Book Routes, Maps, Dock, Supplier and in the Shipyard.

People whom are not happy in your town for a certain amount of time will emigrate from your town. The bad thing, they won't work in your town anymore, they won't have kids and so on. But the one good thing about it is each year they live overseas, they will increase just a bit the 'Port Reputation' as long they are alive they will always do so.

There are 3 buildings that interact with ships. As ships pass by your port they may need supplies for their trip, regardless if they are going into deeper into America or going back to Europe. They will always will need things like, fresh fruits, meats, water, and always needed Caribbean rum. As ships dock in at these buildings they will give good feedback or bad as a consequence of what they traded at this building.

Piracy was really big those days, hurricanes, tropical storms and strong winds could happen at any time. Hence it is logical to stop by and get parts of their ships repaired, replacing a mastil or repairing it. Getting new sails, strings and even ammunitions, gunpowder, cannon parts, weapons and many others. As the village governor you must manage to produce or import these goods so ships are able to get a decent repair done in your shipyard.

Here you will be able to import and export any good. Ships that are coming by could be able to take or not your whole orders, smaller ships will have smaller storage rooms and bigger ships might take it all. 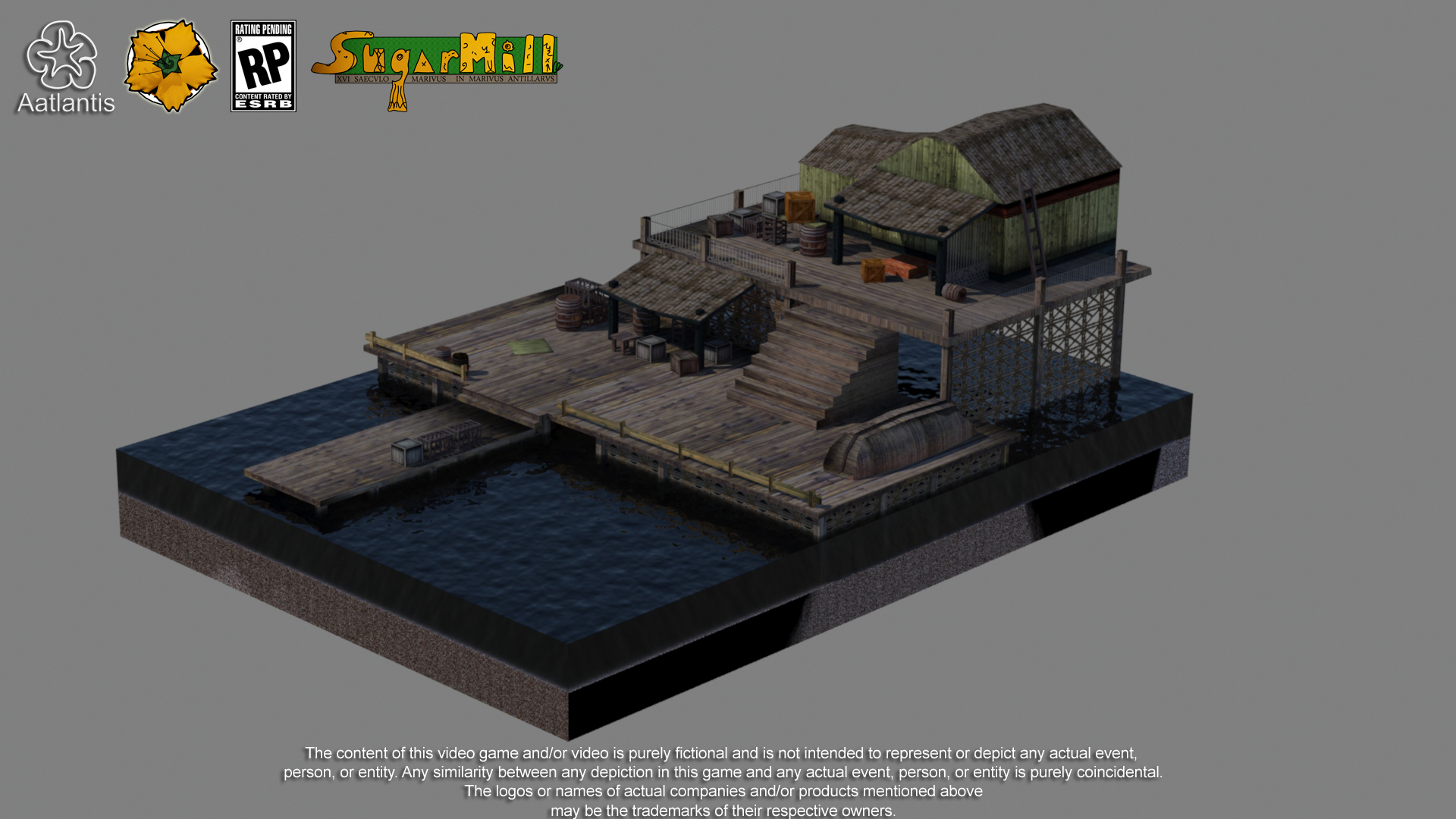 All trading in the game will be paid in the crown currency. Silver, and gold coins. You will need have a positive balance to keep the game going. As you need to pay your workers. If the money balance of the game goes below zero over certain amount of time you will lose the game. You can make money exporting goods that you produce or you might find trade loops, where you can import some goods and resell them. In the 'Supplier' and 'Shipyard' you will get paid for all goods and workmanship taken by the ships. Furthermore you can build a 'Coinstamp' building.

You can build military buildings to diminish the 'Pirates Threat'. Post Guard, Fort and Morro. They all have the same functionality in some way. However, if you can build a Morro you will most likely banish the Pirate Threat. In the process you could lose the game as 'Pirates Threat' increase dramatically when you start the building of one. Building a Morro takes a long time and a lot of resources as well. You need to have a really strong economy and military support to do so.

At the moment there is more than 40 different products in the game. Each one has its own specifications: density, price, productivity and pirate attention factor. As the amount of silver or diamonds in your storages increases this will dramatically increase the 'Pirate Threat'.

There is over 20 different product classified as food. Each ones have its own nutrition value.

Each person has their own schedule, home, work, church, etc. They will work and produce depending on their age, years of school and happiness at work time. Each person will have a different speed in the game, a small variance that makes the game more realistic. This will change eventually and randomly. People that are well fed tend to walk faster. People will wait until majority of age to move out of their home, if they can't that will add unhappiness.

GUI design is minimalistic and still a work in progress. On the left side of the screen it displays the resources you have in storage obviously at the volume higher than zero. If it does not show then you do not have any # of units for that type of product.

Wheel Barrowers will need wheelbarrows to allow them carry the products. If wheel barrowers don't have the wheelbarrows then they will carry 3 times less. You can produce wheelbarrows at the Carpentry. 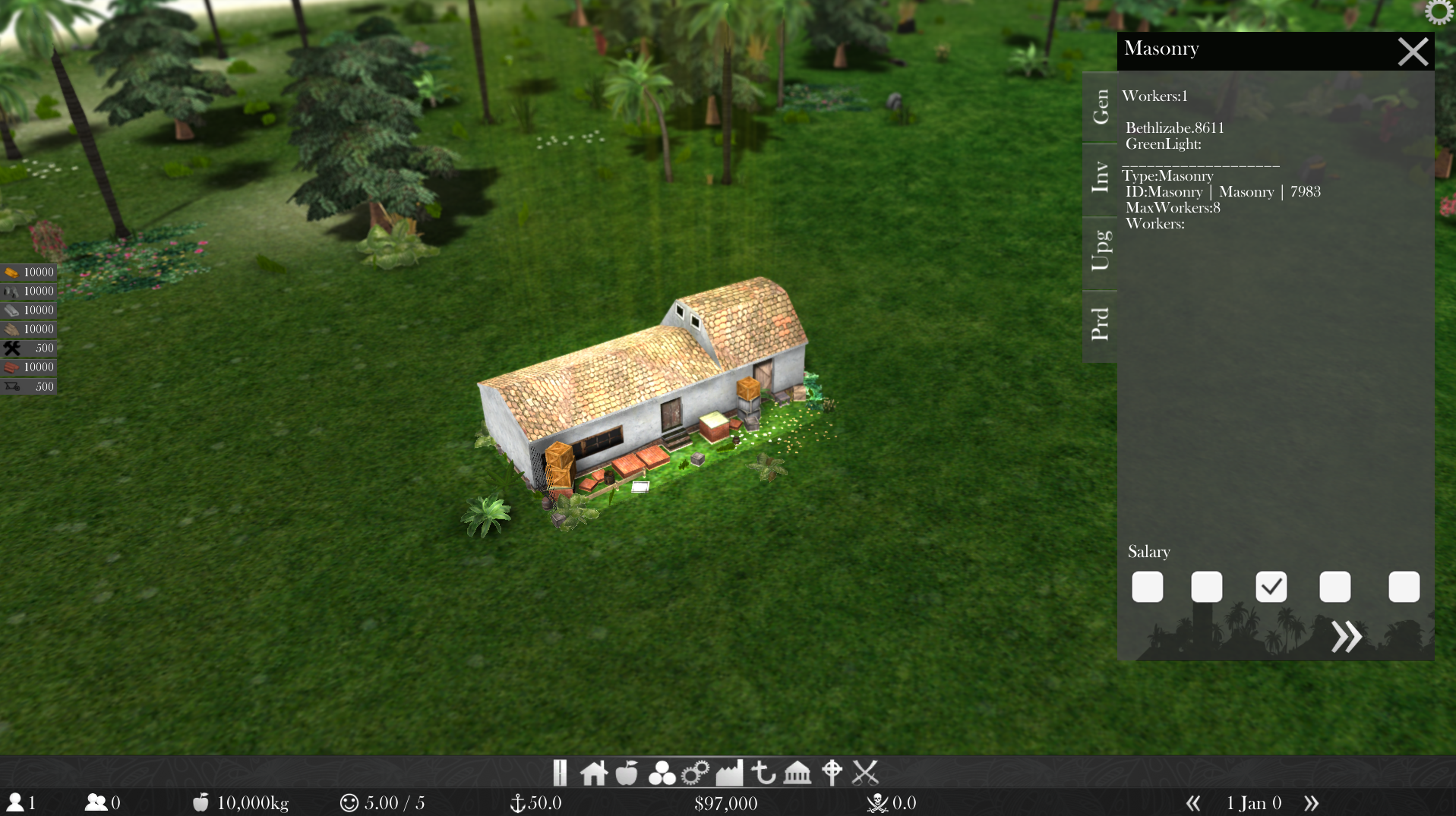 Each house will be slightly different as there are many models and each can have different combinations of materials, the decorations around each building are completely random and unique.

I would like to conclude by saying that mainly all the things that are in game now will stay for the final release, some may be removed and other things may be added as the development process sometimes is a bit hard and unpredictable. The challenge I'm facing now is mainly with the performance of the game. I have to change drastically many things regarding that. I have only 7 weeks to do so and many other things LOL.

Thanks for the support W4RRIOR13. Sow your comment on the Greenlight Page. Awesome!