In this diary, I discuss our recent successes, failures, and our approach to randomly generated weaponry.

So, it's been longer than intended since I've written one of these. For that, I apologize. The thing about game development, is that it is not an exact science. Sometimes obstacles appear for which you cannot prepare. We will be discussing one such obstacle that we encountered recently, but we shall also be discussing some of the gameplay features I recently began designing.

So, everything was moving along quite nicely. Progress was being made in every single area of our development. Since we added Yorick, our sound designer to the team, we now have someone to cover every facet of the actual creation of Flesh Asunder. One evening, I excitedly attempted to import our first set of armor into Unreal, so that I could test it on the main character.

Except, something was wrong. Because of the way that the modular pawn system works in Unreal, and because we will be using that system for our equipping of different armor sets, every piece of armor that we create must have the main character's skeleton and animation data attached to it. Well, for some reason, importing the armor pieces was causing all of the bones to autonomously rename themselves. Very strange. And that, ladies and gentlemen, ruined all of our animation data. Now, we planned on recreating the animations anyway, as some of them needed some work, but I still had to figure out what was causing this issue, because we need a solid workflow for every part of our development, so that adding content becomes easier down the line. Well, I spent many hours trying to figure this issue out. Was it the Mixamo auto-rigger we were using? Was it something about the newer builds of UDK? It was neither. Come to find out, it was the file format we were attempting to use. Apparently, UDK did not like the .fbx files we were producing. They refused to export properly, and every attempt to import them into Unreal failed. So, to make a long story short, ActorX is the way to go. It is built specifically to export files in a fashion that makes them ready for the UDK pipeline. Once I figured out the issue, it became very simple to get a character from our 3D programs into Unreal. Now, we are still going to have to redo all of our animations, but the good news is that we now have the workflow established, and we can still use the Mixamo auto-rigging tools, which will save us a lot of time. 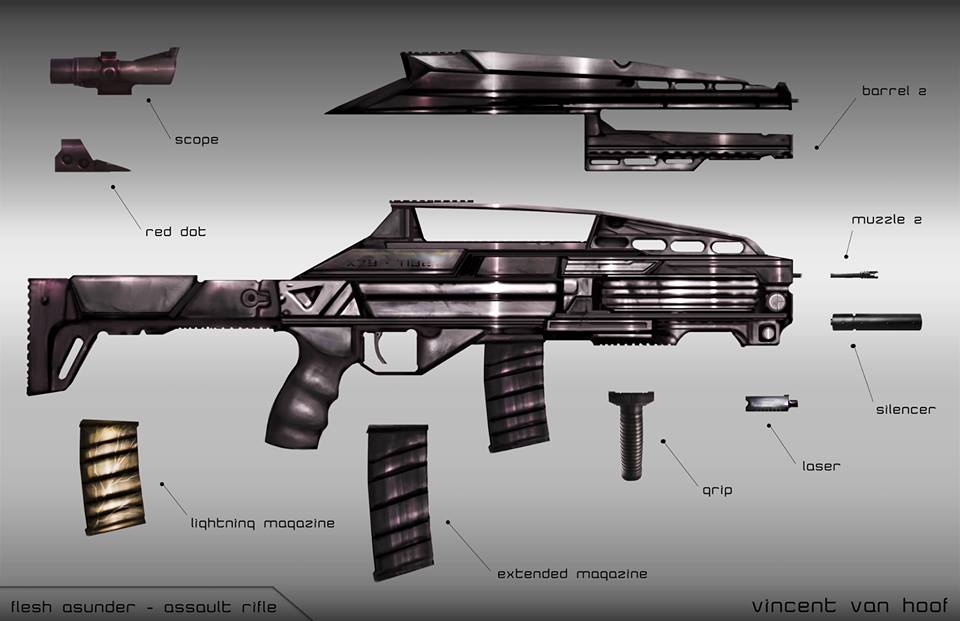 Now, onto the fun stuff. I recently spent several late nights pondering how we could create weapons that differ visually, depending on their stats. We don't want to create a back-breaking amount of work for ourselves because we are very limited when it comes to resources. Still, I felt as though if we didn't at least try to come up with at least a rudimentary system for visual weapon modification, then we would be doing a disservice to our potential player base. We wanted to place a focus on the basic, lowest-rarity items. They are the jumping off point for everything in a loot based RPG. One of our goals from the onset of development has been to come up with ways to make base items useful. We settled on a couple of options. The first is to allow the player to break items down for crafting materials. The second is to allow the player the ability to craft upgrades for lower-rarity items, without making those items more powerful than what can be found through the loot drops themselves. 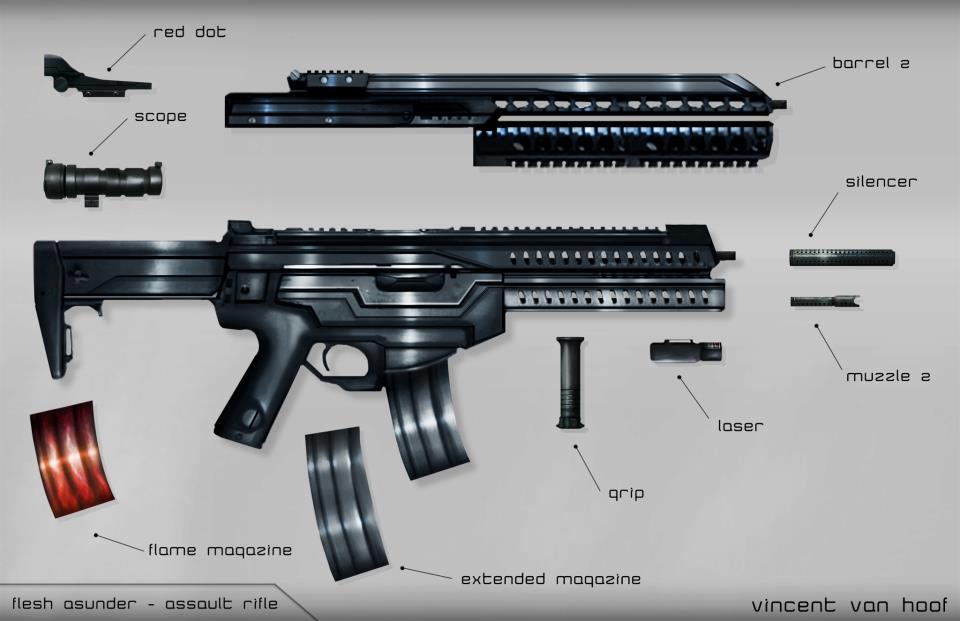 So, after much consideration, I came up with the following system:

Base weapons will not be made up of random parts. They will be deliberately built. However, every weapon will possess a number of slots. Depending on the extra stats found on an item, visual changes will be made to these slots. For example, an assault rifle may have a top rail attached to its base version. However, if the player finds an Enhanced version of that weapon with a +12% to range stat, then that rail will have a scope mounted to it. Some visual upgrades may have to share multiple stats (the same scope might be used for +10% to accuracy, etc.), but this gives the player the ability to immediately see if a weapon is worth picking up, once they grasp the basics of this system. This will also be directly tied into the crafting and upgrades system we have planned for later on in the development cycle. Weapons will have a maximum number of stats that can be attached to them. In addition, the player will be unable to attach upgrades to slots that already have an extra stat. Using the aforementioned example as a reference, the player would not be able to attach a scope to the assault rifle since there is already one in place. This system will give the opportunity to hunt for items with stats that they want, hunt for items with available slots that they want, and will also give them a reason to find and craft upgrades.