Maps, auditions and advisers - in other words, explaining the mechanic behind management of the player's lands.

This week, for the second time in total, we will talk about the strategic and economic aspect of our game. Our main topic for today will refer to those who work (peasantry) and the basics of village's management.

But, first of all, we would like to say one thing.

At the beginning of Noble's Life, the player's character is in a bad position. Army of enemies just passed through his territory in a very brutal manner. In the trailer we are only showing you the destroyed city, but let's be clear, most of the villages and farms are burnt, slaughtered or the people run away. Whereas the few that stayed are hoping for some kind of help from their lord in these hard times.

What will the player do, it's up to them really. At the start they will have only a few villages under their control, but if they'll focus on expansion and progression, they would certainly have more of them.

There are three basic ways of managing the lands and peasants. 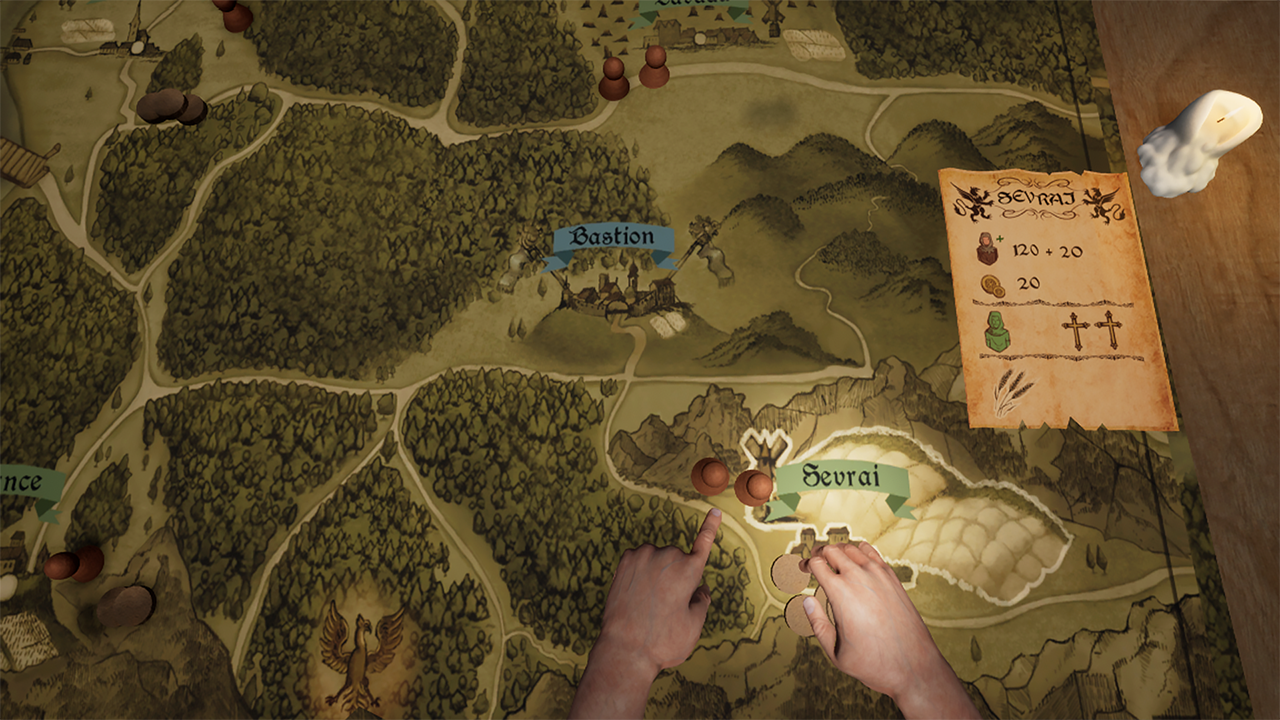 It should be clarified here, that the player's character won't visit the villages most of the time. That's why they can manage the rural areas from the inside of their castle or city that's built near it. The basic tool for that is the estate map (see graphic above). It can be used to establish the amount of existing taxes (in a currency and nature) and recruits (mainly for military needs - because war, that's why). In addition to that, it allows the player to make investments, but also helps to quickly find the actual status of the villages that's in their possession.

We've chosen this system simply because it hits the sweet spot as the quality of life feature, but most of all, it's immersive, because it allows the player to manipulate the figurines on the board rather than soulless sliders.

Every village on the map is described and contains information about them, among others, name, the number of villagers, happiness and religious level, and it's produced materials. About the statistics and their dependency, we will be talking more in the future Dev Diaries, because they have a big impact on the village's fate.

High level of happiness will positively influence the morale and the quality of recruits, the taxes and it will help avoid many potential problems. Low levels on the other hand... Even cheering each other up saying " jacques bonhomme a bon dos, il souffre tout " (peasant’s back will bear everything), well that wasn't really true. Peasants revolts were common, in which the french Jacquerie and the english Wat Tyler's Rebellion were very important events during the Hundred Years’ War and they deserve to have a whole separate topic about them in another Dev Diary, and when that happens, we will mention our ideas inspired by Dithmarschen ;) Yet another important thing to be aware of, are appeals and problems of the villagers. They can be resolved using the audience mechanic, which, along with another one, is covered in the second part of the Dev Diary on Steam.