We will continue with our article from last week. A quick recap in case you missed it: We had started doing some research and then began designing the bosses of the game. We had Artemis, Apollo, Ares, and Athena.Also, we had some problem with last week image sizes, so this week the images will be a bit jpegized (I love .png, but it’s maybe better leaving it for games).

Hera is Zeus’ wife, and considering that Zeus was going to be final boss, we thought of slipping her into one the game’s final stages as well. But later, when we started looking into Hades, we decided to put him near the game’s end (along with Zeus), so Hera will probably end up showing up a little bit earlier in the game.From scratch I started a much more queensy look that with other gods. She has jewels all over her, and the Polos, which is like a crown.Plus there was an important fact about Hera that we wanted to emphasize, that she bitterly transformed everyone she did not agree with into animals, so we wanted a grumpy old woman look, but at the same time young enough to match with Zeus. 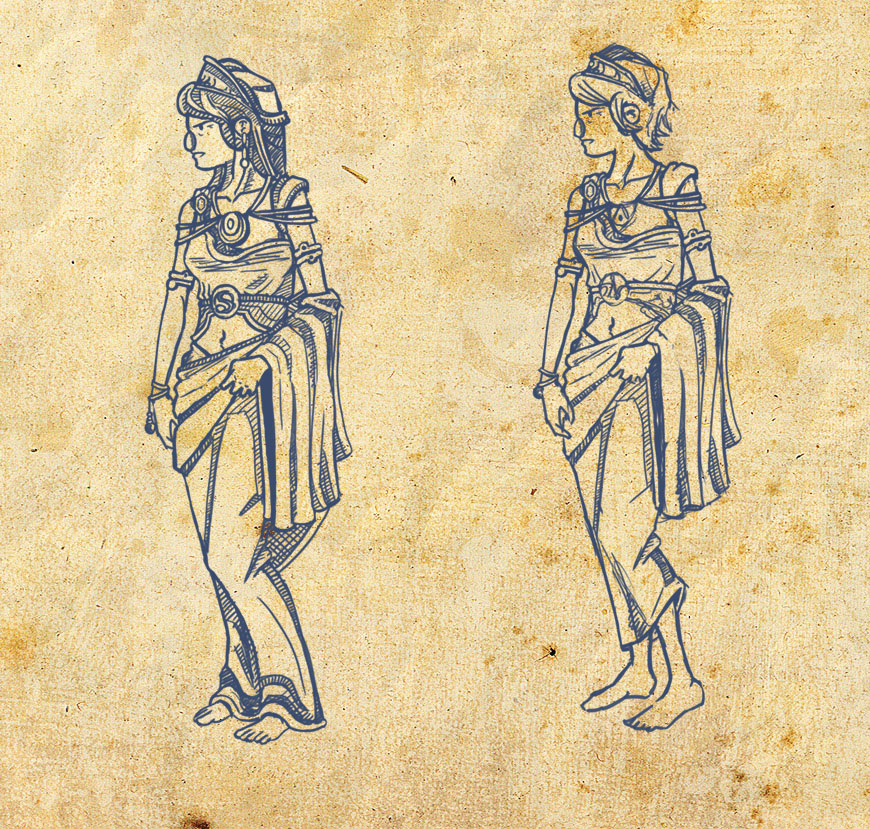 Also, here is a little .gif of the process.

I start with some basic geometrical shapes to outline the body’s structure, then I make a standard woman body, which I will be using for all of the design tests with Hera. Finally, it’s a matter of throwing detail without thinking too much.

Hephaestus was one of the easy ones, but it still took me some time. The hard part was to find the body posture to suggest all of his illness.In the first draft, I approach him like a block, which was kind of cool. Like all the gods, he had an stylization, making him less cartoony. In the first iteration, it went out too erect, so eventually I stooped him a bit, I made the body bigger, and his head much lower.I wanted to made his overall (a constant that he always had) cover with leather and belts, because, belts.Also, the hammer it’s not definitive, I want to make the hammer unique, not some Thor-esque thing, without any joke. We will see what can we do there.Finally, I did’t have enough time make some more bald Hephaestus, as in the early concepts. I liked the idea of baldness (as the 60% of my characters in Rogue Legacy) for a blacksmith, but it sounded too much of a cliché.

Finally, for this week, I had to do Hades, which by far, it’s the most interesting god I had to concept. I didn’t quite nail it yet, but I liked some results enough to put them up here.The first drafts came out kinda Jerry Garcia, I liked the idea of a good God. All of the gods, are your enemies, you have to fight them, but in the early myths Hades was not much of a jerk, like we can say about Hera or Zeus, he is often depicted as a balanced person, knowing his role in the cycle of life. Hollywood pretty much made us think of him as a bad guy. So I started with the cool, hipster – philosopher kind of guy.I also tried a more grimmy look. Putting a hood in a character makes him automatically grimmy, so I started with that. Then I thought of chains, which keeping in mind his relation with death, was the logical conclusion.In later attempts, I put him a mask with no face, and got very very creepy look, maybe a bit too much for the rest of the game.Finally, it put him a beard, and it suited him well.Anyway, I liked the RobinWilliamsInGoodWillHunting kind of thing from the first attempt.

Well, that’s all for this week. The next week will have the four final gods, and we will move on to something more technical, delivered to you by Sebastian.Also, we were very happy about the reception of last week’s article. Thanks all of you for being awesome!

I have one suggestion though, about Hades. If you want to depict Hades different from the villainesque way that Hollywood usualy shows him, I suggesting taking off the hoodie. The first thing that comes to my mind when I look at him is that he looks like a really mean villain or that really cliche mysterious master/guider. However, if that's what your goal is, I say spot on!

By the way I loved how Aphrodite was made and Hephaestus' posture!

Thanks a lot for the feedback!
I think you are right about the hoodie! I will give it a try, to see how it looks!