This week we’ve been making the concept art of some of the gods that will appear in Okhlos! Making concept art is one of the tasks I personally enjoy the most. So for me, it was a very good week!(You can click on every image to see it’s full size).

The approach we have taken was initially to research. We spent three or four days getting to know everything we could about the gods. I can’t emphatize enough the importance of doing a good research of the subject you are exploring. We have researched a lot from Wikipedia, but also from Robert Graves’ The greek myths, which is the most amazing book about greek mithology out there. Also, we explored which were the common conceptions about the gods, and what were the popular belief about them.This research helped us establish a ground to add our own interpretations. For example, Posidon (yeah, without an E) originally was an Indo-European horse god, which later came to the pre-hellenics cultures. That’s why even Athens it’s a port city, they don’t venerate him so much. All of this gave us new material, and allowed us not to drift into the usual cliches about some gods. 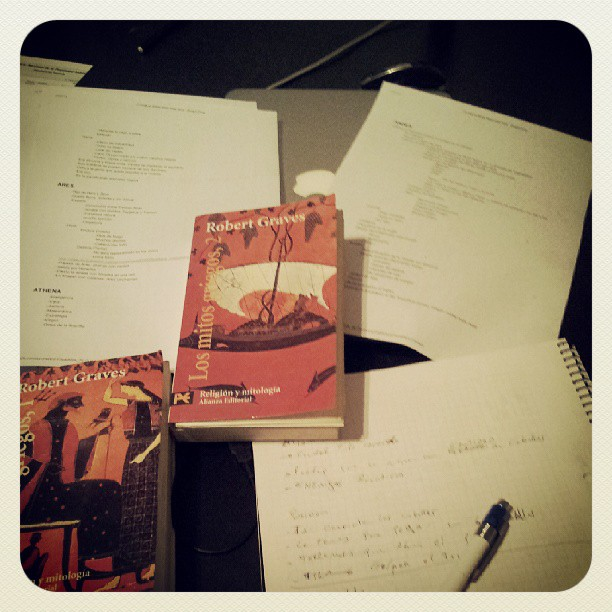 When we finished the research stage, first I drew the majority of the gods, in a very quick and drafty way. This helped me establish an aesthethic line, and the common things which all of the gods will have. This gives coherency between the gods, even when they are not ment to be together in the game. 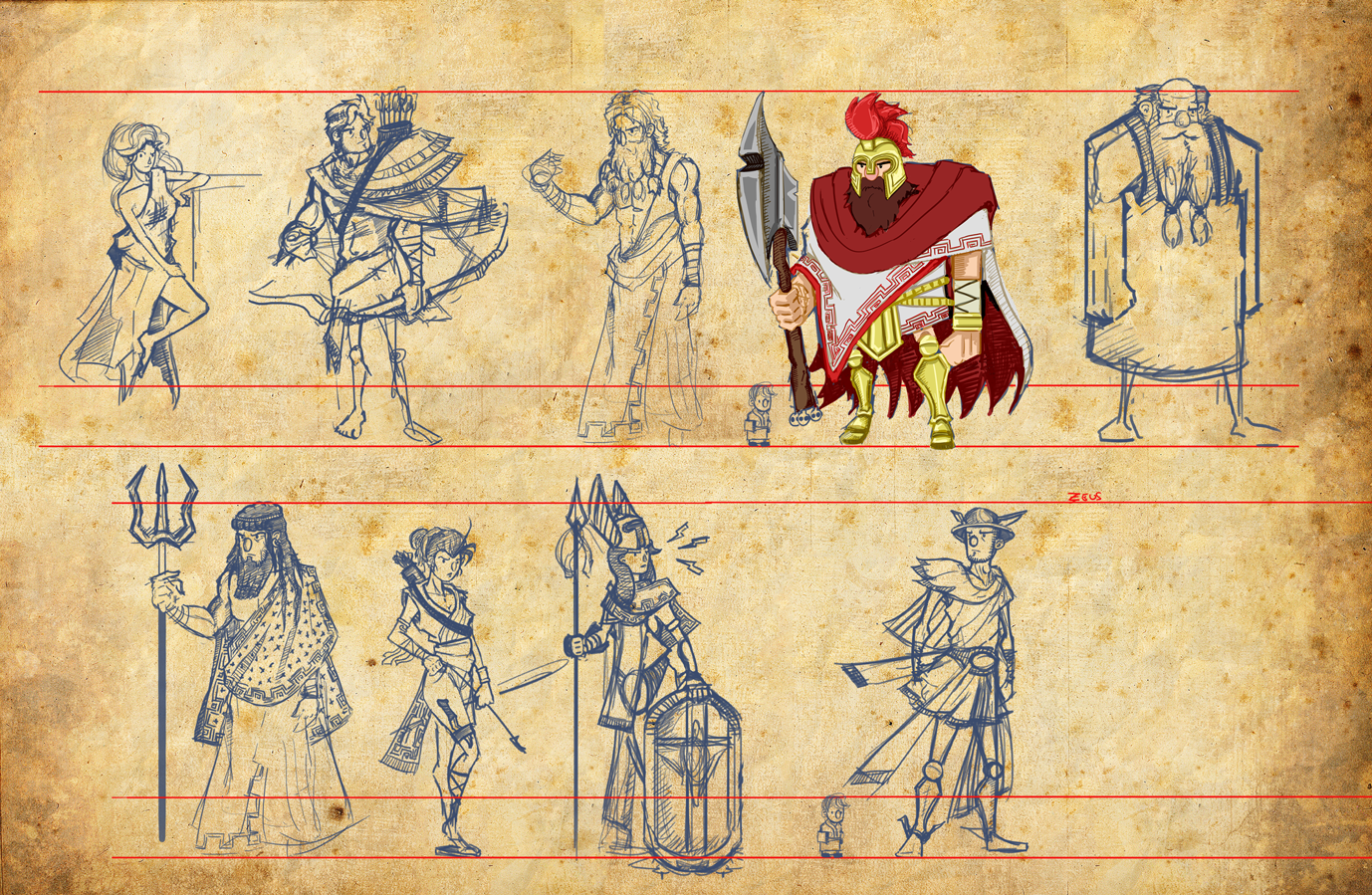 As you can see here, there are some patterns that were early established in all of the gods. Also the robes were an important element from which I could part from. These were not definitive, or made with much love, these were quick sketchs, so I spent a lot of time thinking, but not a lot of time drawing, or caring about anatomy or other stuff.Finally, the best part, making lots of drawings.

I already had Ares from a few early tests, which coined what could be the god aesthethics.

I started drawing Ares with different kinds of helmets. Also, I made him very short and kinda fatso. I was thinking of a sort of Gimli/violent dwarf thing. Later, I stilized him. Also, made his tunic to cover him more, so that it could cover some things for the animations.

Athena was the second god I approached. The complexity about her was very much how the Peplo would interact with her. Should I base the design in the classical peplo/maiden, or should I invest her more as a warrior?Finally, I haven’t make the choice yet, but I’m feeling very fond of the color version. It’s simple and very clear about her.

In my first attemp, I tried to change the helmet to a very different thing from the classical statues. It turned out it didn’t work very well, so I based the rest of the designs into the classical helmet.Also, I dont have a clear solution to the Aegis yet (the shield). I guess that it will give me a lot of work in the future to figure it out.

The olympic twins brought me some challanges.First, I picked up what I drew first, which was very cartoony, and stilized it a lot. I liked the cartoony look, but we wanted more solemne presence for the gods.Also, I wanted to emphatize the fact that Apollo is in some way, the same god as Helios, the sun god. So I made some kind of wrist with the sun emblem. But the problem was that I had no intention in making that kind of avatar simbolization into each god. I drew some versions of Artemis with the same concept in mind (but with the moon, as she was the reinterepretation of the triple moon goddess maid-woman-elder).

As for Artemis, I took the bow to be a lot like the usual RPG super bows, and added some manga style to it. It’s not finished yet, but I think it’s going in the right direction.Also, I didn’t want to give her a too much of a sexy look, so in the majority of the cases, I tried not to emphasize the boobs too much. The last version shows Artemis as a roguelike archer, maybe it’s cool, but it’s not the right choice, unless we give it a lot of context.

I had to work Artemis and Apollo as an unit, so i made a lot of ctrl + tab between the files. Finally, I think the toga version, and the wrist version could work with any of the other Artemis.Also, a lot of Apollo representations were with him naked. And he is like a simbolization of perfection and male beauty, so i went to the censored version. In the game, it would have a black square, like in the concept. We think it’s cool, but it pushes to make it to other gods as well, and the joke would feel over used later in the games.

This is awesome, please keep it up and good luck!

I really like the palette you used for the Gods. Really nice work.