Progress is going well with redoing the perk system of Battle Brothers. While it’s not quite ready to go yet, we have improved the game in other aspects as well. That’s what we’re going to talk about this week, so let’s start!

Progress is going well with redoing the perk system of Battle Brothers. While it’s not quite ready to go yet, we have improved the game in other aspects as well. That’s what we’re going to talk about this week, so let’s start!

Certain backgrounds, like sellswords, could vastly exceed other backgrounds in effectiveness if you could afford them. That makes sense, of course, in a game that is about sellswords, but what if some farmhand or former militiaman were talented enough to eventually catch up or even surpass them?

All characters now have three attributes in which they’re especially talented - how talented is determined by a star rating of between one to three stars. The way that attribute increases on levelup used to work, you couldn’t predict exactly how character attributes would develop, and if your men would always manage to take away the right lessons away from what they experienced. Being talented in a particular attribute now means that this variance and randomness is lowered or even removed; characters will consistently roll higher on attributes in which they’re talented. Of course, the more talented, the more rare. Can you find that prodigy that has full stars with all their attributes?

In addition, we’ll be introducing two new backgrounds to the game with the coming update. We’ll also add a whole bunch of new events that take into account your party composition. Depending on the characters in your employ, you’ll have different options with events and may gain access to rewards that you otherwise couldn’t. For example, that historian you hired might just be able to make sense of the old map that appeared useless at first glance. We’re currently at 18 new events, but that number is likely to grow further before the update launches.

Attacks missing in combat happens all the time, but it can still feel frustrating as veteran mercenaries make themselves look incompetent by seemingly swinging at nothing but air. In reality, they’d miss because the opponent does their best to avoid getting hit, of course, as they dodge, block and parry the attacks. When it comes to shields, that’s something we’ll emphasize more from now on.

Any attack that misses because of the defense bonus granted by shields, or in other words because the opponent uses their shield to actively block the attack, now actually does hit the shield. This is shown visually, accompanied by different sound effects depending on the material the shield is made of, and actually damages the shield by one point. The durability of shields has been increased, so one point doesn’t mean that much, but it can slowly whittle down shields in prolonged engagements. To effectively get rid of shields, the best way is still to use the “Split Shield” skill of axes and some two-handed weapons, just like it used to be. 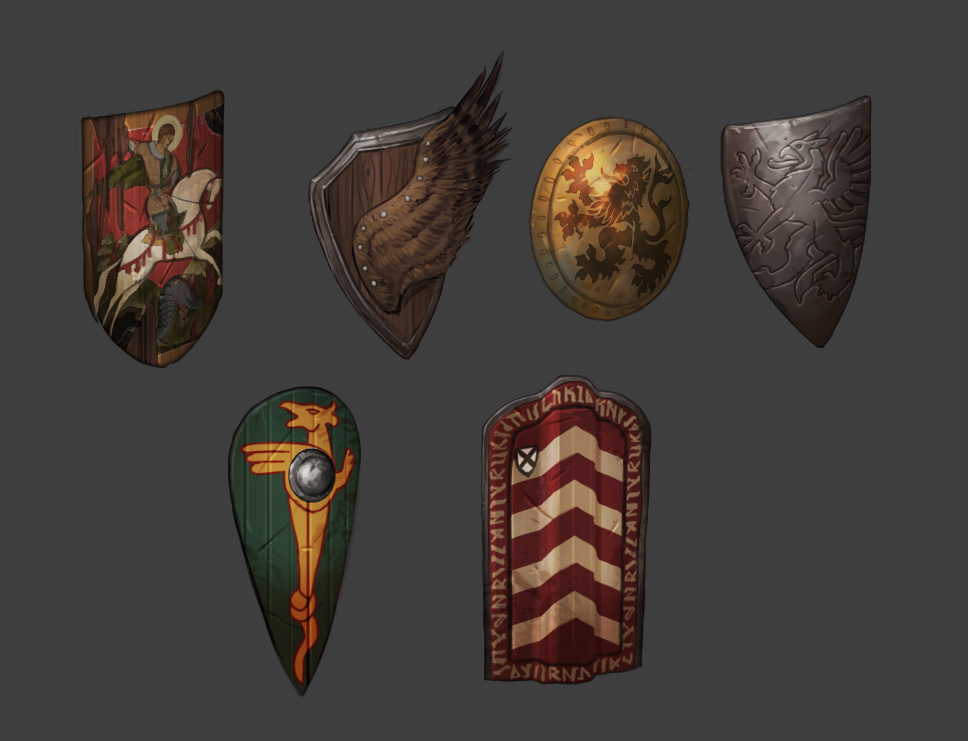 These changes should help to make combat feel more authentic, and misses less frustrating, as you’ll have a better idea of why you didn’t hit, and even if you didn’t hit, you may have still caused some damage to your opponents.

Time to do some cleaning-up. The Overwhelming mechanic has been in the game since the very beginning - way back in the public combat demo that was released in 2014, a full year before the game became available on Steam Early Access. And yet, it’s remained one of the more nebulous things for players. It’s not that intuitive to understand, and even if you do understand how it works, it leads to awkward use of the wait-function in combat to make the best use of it.

Come next update, Overwhelming will be replaced by Surrounding. The new mechanic is quite easy to understand; every ally beyond the first that is adjacent to an enemy counts towards the Surrounded bonus, which increases the hit chance of anyone attacking that target in melee. It goes for you just as well as for your opponents, and there’ll be new perks interacting with this mechanic in interesting ways. And if you think that’s how Overwhelming already worked, that’s just one more reason for why this changed was needed.

The next update will also include a rework of the banners that you can choose from when creating your mercenary company. We did the current ones way back when we scrambled to get the game ready for Early Access, and we’ve now taken the time to create actual unique mercenary banners that are distinct from those of noble houses and much more detailed.

I like Talents, shield changes sound also useful, now if there was more refined armor system instead of "hey I hit you and you armor is going to disintegrate into nothingness"