We take a look at the Officers and Flare Guns in Isonzo.

In today's development blog we will take a first look at one of the classes we are introducing in Isonzo. In a previous blog we gave an overview of our new approach to classes and their balance.

Today we will focus on the officer.

“No force should be without a leader. The Officer issues orders, inspires those under his command, and can request support at command posts.”

The officer in Isonzo is the core of the team. Unlike in Verdun & Tannenberg where every squad had a commander with the ability to call support, in Isonzo there can only be a very limited number per faction. The officers in Isonzo are also of a slightly higher rank (commissioned officers, or COs) - this is clearly distinguishable visually thanks to their uniforms. 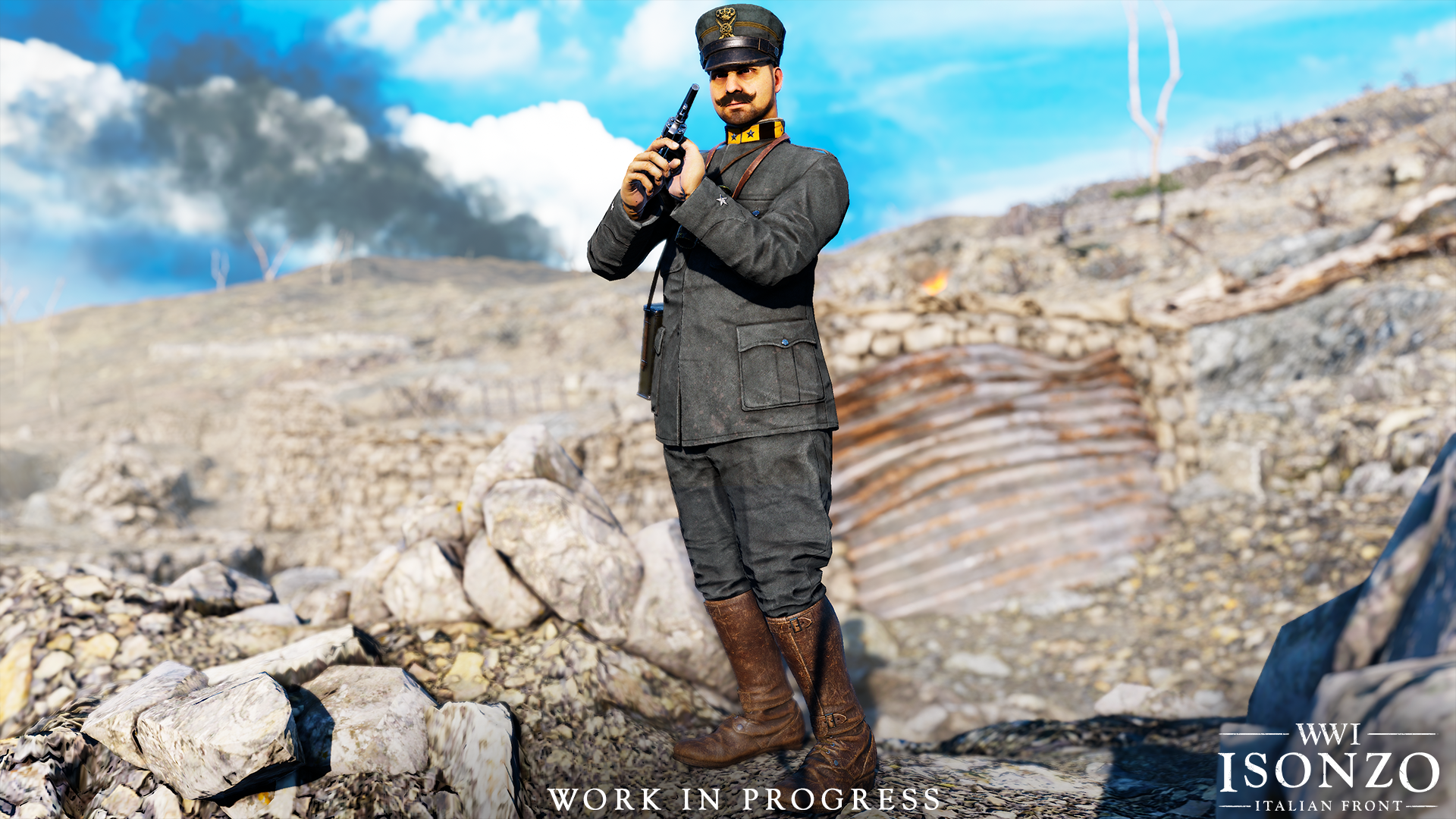 A typical Italian infantry officer on the Carso frontlines, 1916. 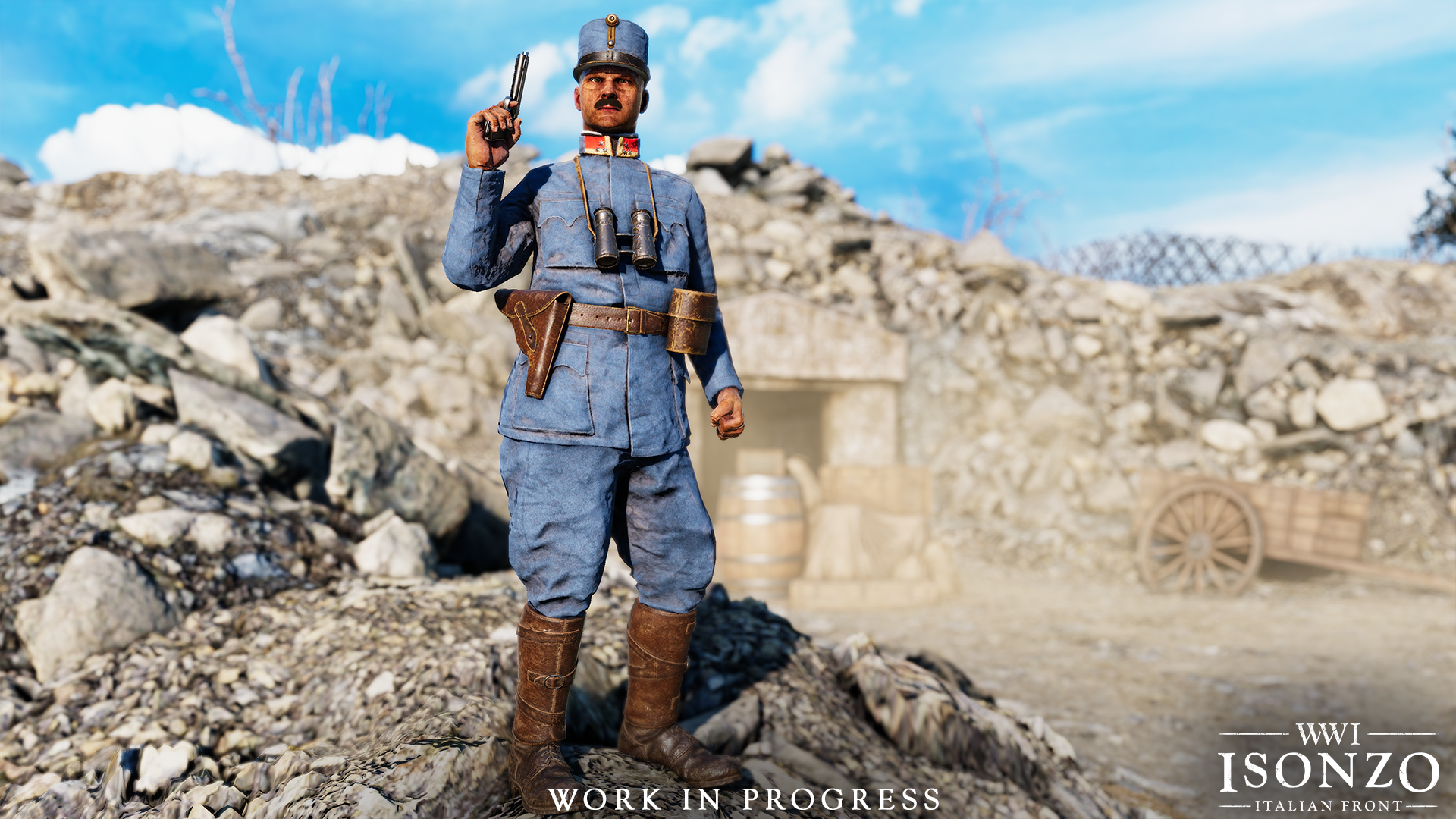 An Austro-Hungarian officer in front of the Schonburg Tunnel, 1916.

The duties of the officer are to call in divisional resources and provide direction for the team. We’ve seen in our playtests that a competent officer, especially for the attackers, can turn the tide of battle. Don’t worry, we’re well aware of the risks that a less capable officer can pose, so we’re looking into systems to check that officers are making use of the resources available to them.

The standard officer equipment includes a pistol, a trench whistle and a unique way of calling in off-map support. Many of you have already guessed it based on teasers from previous blogs…

In the last dev blog we confirmed the Hebel Model 1894 flare gun was in the game - so what role do flares play in Isonzo?

We’ve developed a unique flare system based on historical flare usage. Many people are familiar with the use of flares to provide light at night - even though these lights would often be artillery shells (‘star shells’) rather than flares fired from flare guns. However, flares were also used for signaling. 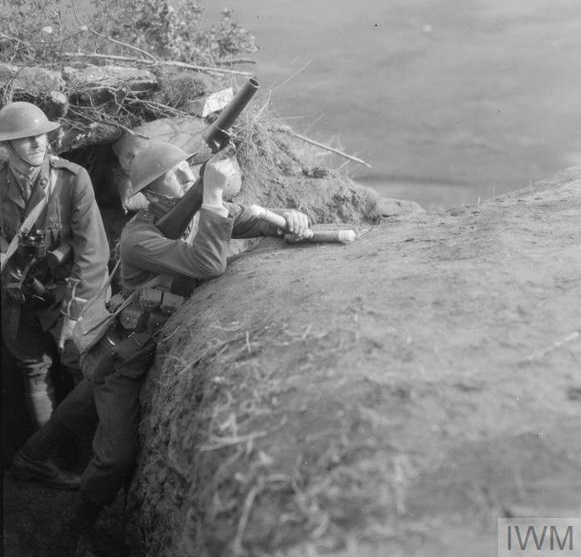 Photo from the Imperial War Museum shows a soldier firing a flare gun in 1917.

A flare could signal both location and intention, and this is how they function in Isonzo. After shooting a flare, the location will be marked on the command map viewable by officers, and can be used to target support. Firing two flares in quick succession signals a request for stronger support, and then there are colours to consider… but that’s for another time.

Up to six flare markers can be present on the map - any more than that and the oldest flare marker will be removed to make way for the new one. There’s no timer on the flare markers, which allows for more strategy.

Flares must be physically fired by an officer (or another class with a flare gun, which we’ll reveal later). The flare provides information to rear line observers, which the player officer can then make use of by making their way to a command table and using a field telephone to call in support. What kind of support, you ask? 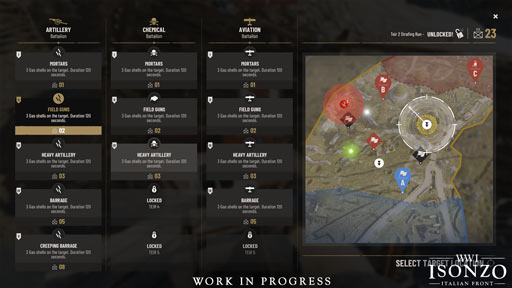 A wide range of choices! Low-res image is intentional: we’re still finalizing all the options.

We’re still nailing down the details of what each support type will cost and what you get for each call-in, but as you can see there will be plenty to choose from, in the areas of artillery, chemical weapons, and aviation. Some different support types offer degrees of power - field guns hit harder but cost more than mortars, for instance. Aviation leans towards recon and information gathering, as it did historically. But some support types are a little more involved - the creeping barrage for instance, which requires the officer to indicate the direction of the barrage. Very powerful if used correctly. 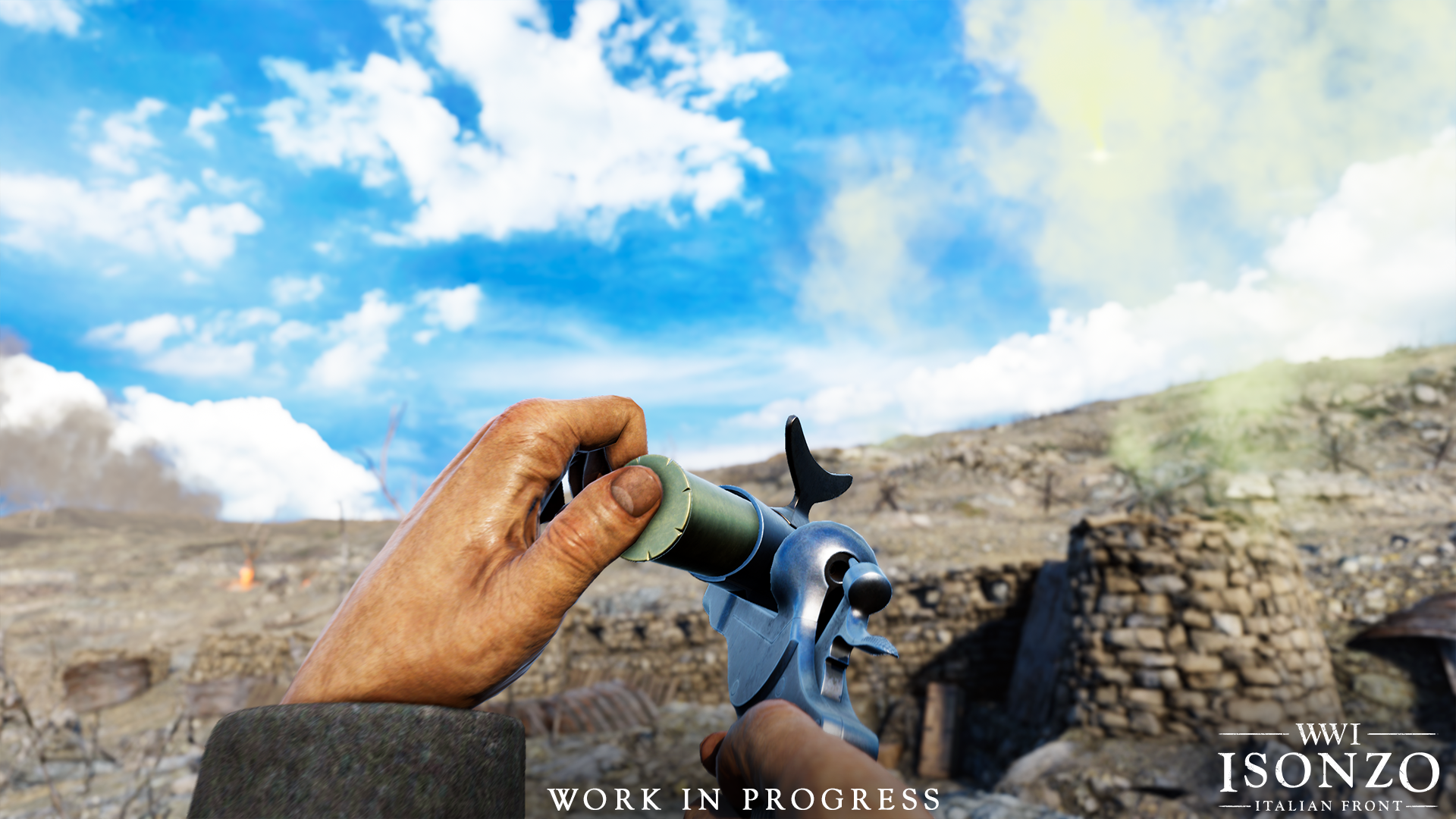 We mentioned cost - it won’t work like Verdun and Tannenberg where you would call in a support power, and there would be a cooldown before you could use any kind of power again. We’re still finalizing the details, but officers will be able to call in multiple support types at once - as you can imagine, this opens up some real possibilities for strategy.

You can keep enemies suppressed over longer periods by using lots of relatively cheap mortar barrages, or hammer them with a simultaneous combination of heavy artillery and gas barrage… but you won’t be able to afford to keep that up for long, so you’d better have a big push planned to follow right away. Luckily, in Isonzo the officer has a great way to bring about such a coordinated assault...

Whistle While You Work!

The officer can use the trench whistle to both set an order to players or to temporarily reduce the spawn wave timer to zero, meaning all players on your team will immediately be able to respawn. An obvious way to use this is to call in artillery on enemy positions, then use the whistle to bring your whole team into action, and finally use the whistle again to indicate where the assault should go to follow the artillery.

An officer directs his men with the whistle.

But such a use invites the opposing team’s officer to wait out your assault, and use their own whistle to call in a devastating counter-attack, so it might be smarter to hope they use their whistle when your artillery comes in, and then in the event your first wave suffers heavy losses (surely not) use the whistle to bring in a second wave immediately...

Every class has a number of perks to choose from which influence how they play. Here are a couple of the options open to officers: 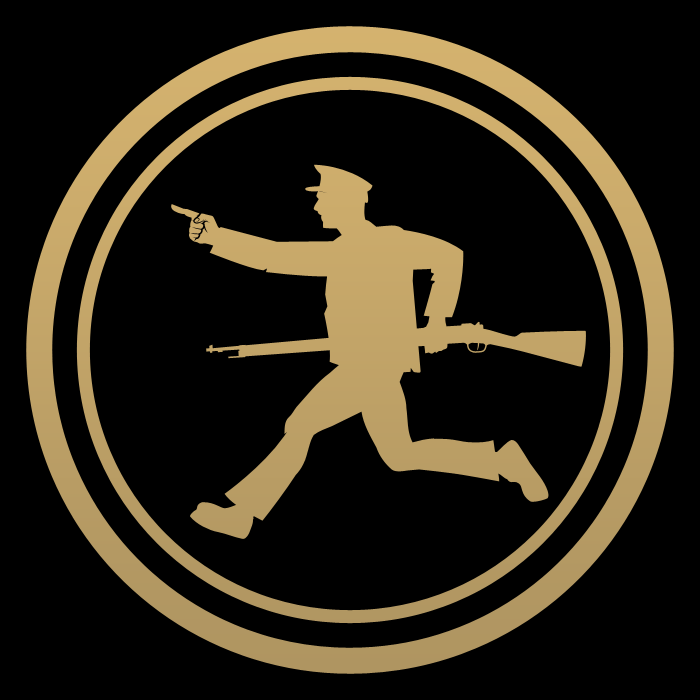 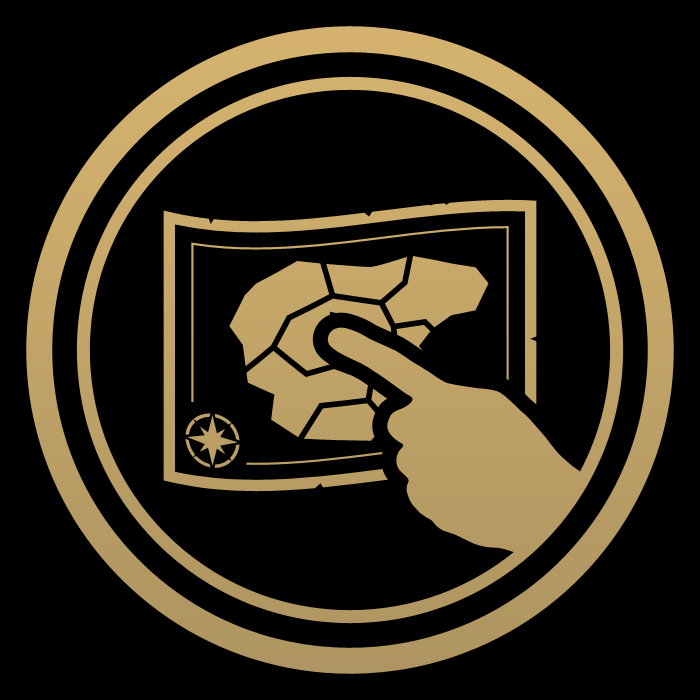 Staff Officer: Gains the ability to draw Orders on the map. Rather than placing general command markers, you’ll be able to draw arrows to give specific guidance to your troops.

We’ll close this blog out with one of the flare guns available to Italy: the Lanciarazzi Very. 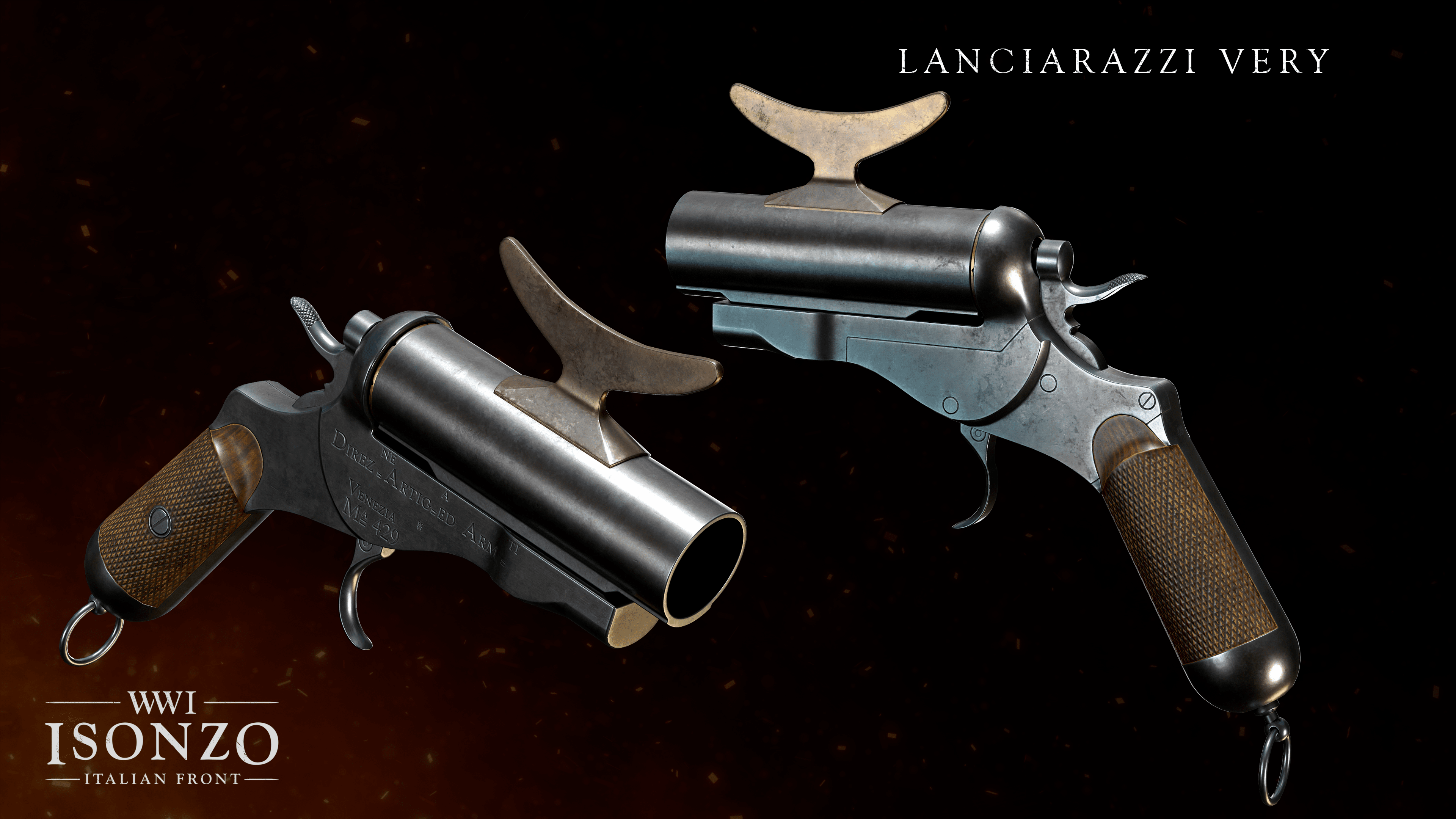 Can you figure out what the handle on top is for? This flare gun has a horizontally rotating barrel!

That’s all for today!

Look forward to more class deep-dives in future Isonzo Intels, and of course we’ll share more about the different kinds of support call-ins when the details are ironed out. Lots to look forward to...