World War One has arrived in the mountains of the Italian Front - beautiful but deadly in equal measure. Inspired by the two year struggle for control of the Isonzo river valley and Alps during World War One, Isonzo elevates the WW1 Games Series, figuratively and literally.

The new Offensive game mode puts you right in the middle of key historical offensives on the Italian Front - lead the charge across stunning Italian landscapes on the attack, or prepare your defence on dynamic battlefields.

Everything is recreated based on research and field trips, from the uniforms to the huge arsenal of weapons. Blow your enemies away at range with mortars, artillery and air support, or finish the job at close quarters with a bayonet. Watch out for the dreaded poison gas...

You’ve never experienced WW1 action quite like this! Isonzo will be available on PC, PS5 & PS4, Xbox Series S/X & Xbox One.

We’re only scratching the surface of what’s new in Isonzo - there’s more yet to be revealed, including details on the new features and beautiful Italian battlefields are on the way: wishlist now on Steam and follow our Reddit or Twitter to get the latest updates!

The WW1 Game Series currently includes Tannenberg and Verdun (set on the Eastern and Western Fronts). These authentic WW1 shooters let players choose from a range of squads from across the war, as they fight for control of the ever-changing frontlines.

While you wait for Italian Front to heat up, you can already join trench warfare in Verdun, or maneuver for control of key sectors in Tannenberg.

Isonzo Intel #19 - Meet the engineer (not that one)

The Engineer supports the team by handling engineering tasks such as constructing static weaponry, cutting wire efficiently and deploying extra defenses and obstacles around the battlefield. 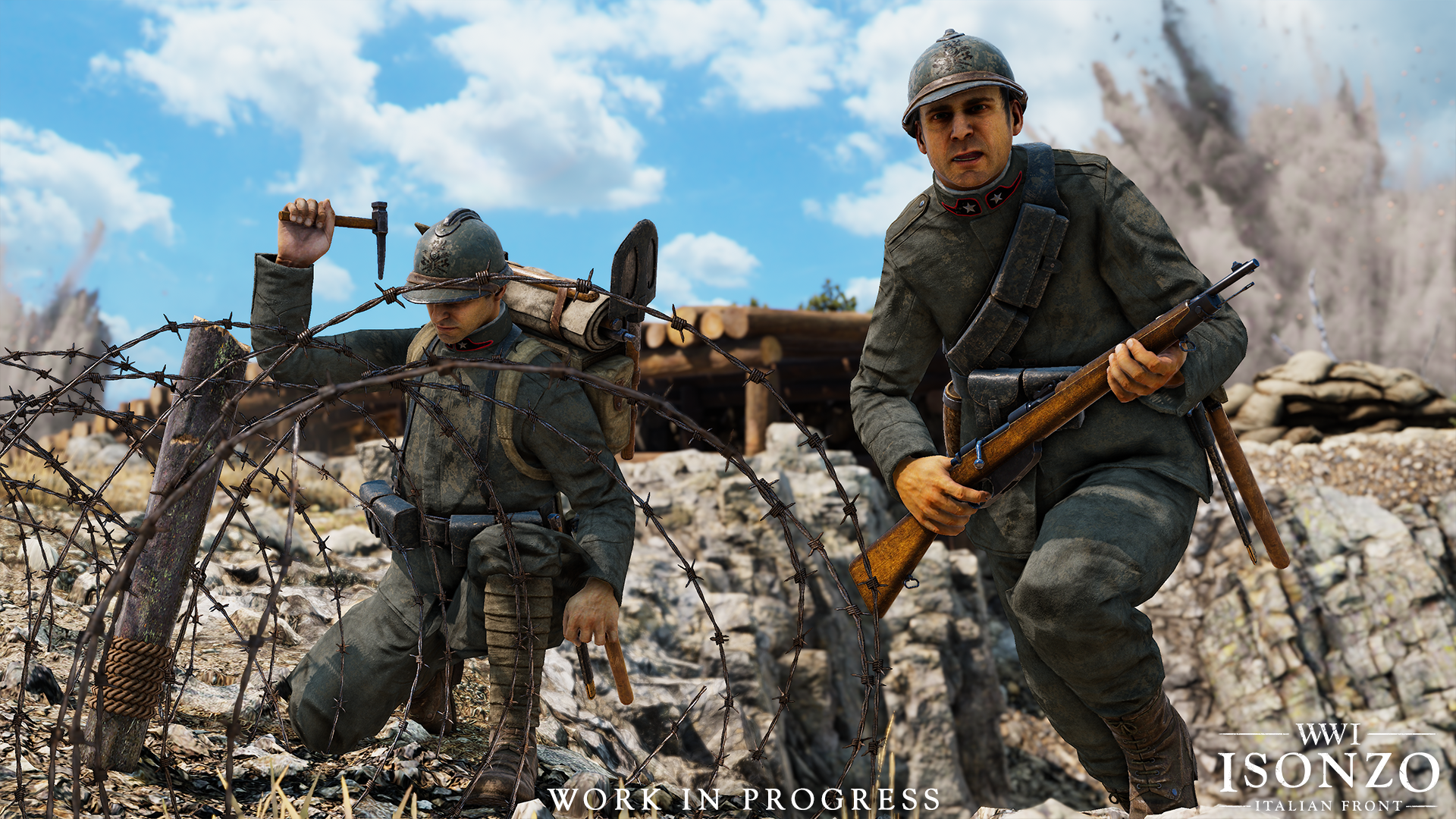 Military engineers have been a feature of armies for a long, long time. Since early siege engines required specialists to build and operate them, engineers have accompanied armies. Also responsible for field defenses, engineers were vital throughout the First World War for all sides. On the Italian Front, the mountainous terrain would pose a constant challenge to both sides as they struggled to build defenses, supply their troops, and launch attacks in the rugged terrain. Engineers were responsible for more permanent fortifications, logistics systems like cranes or cable cars, and their work was important for offensive actions too. 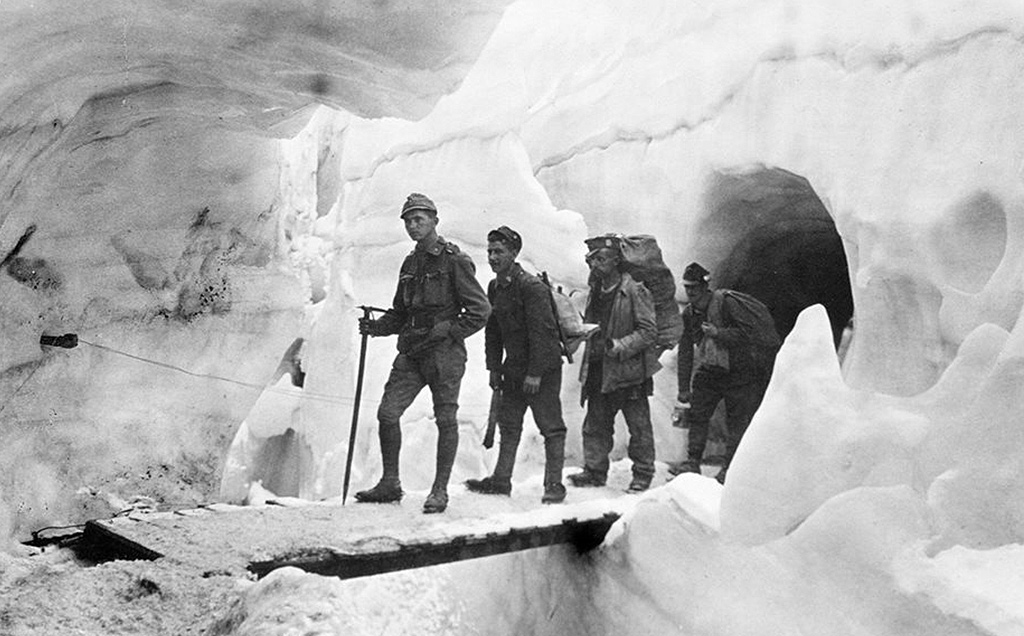 Part of the Austro-Hungarian tunnel complex carved out from the Marmolada Glacier in 1916.

In the Dolomite region, there were more than 30 mines detonated between 1916 and 1918, with explosions large enough to change the landscape: peaks lowered, cliffs shifted. The tunnels for these mines would be dug by engineers. We also saw back in Blog #12 how Italian engineers prepared mountainside walkways to get the jump on defenders! 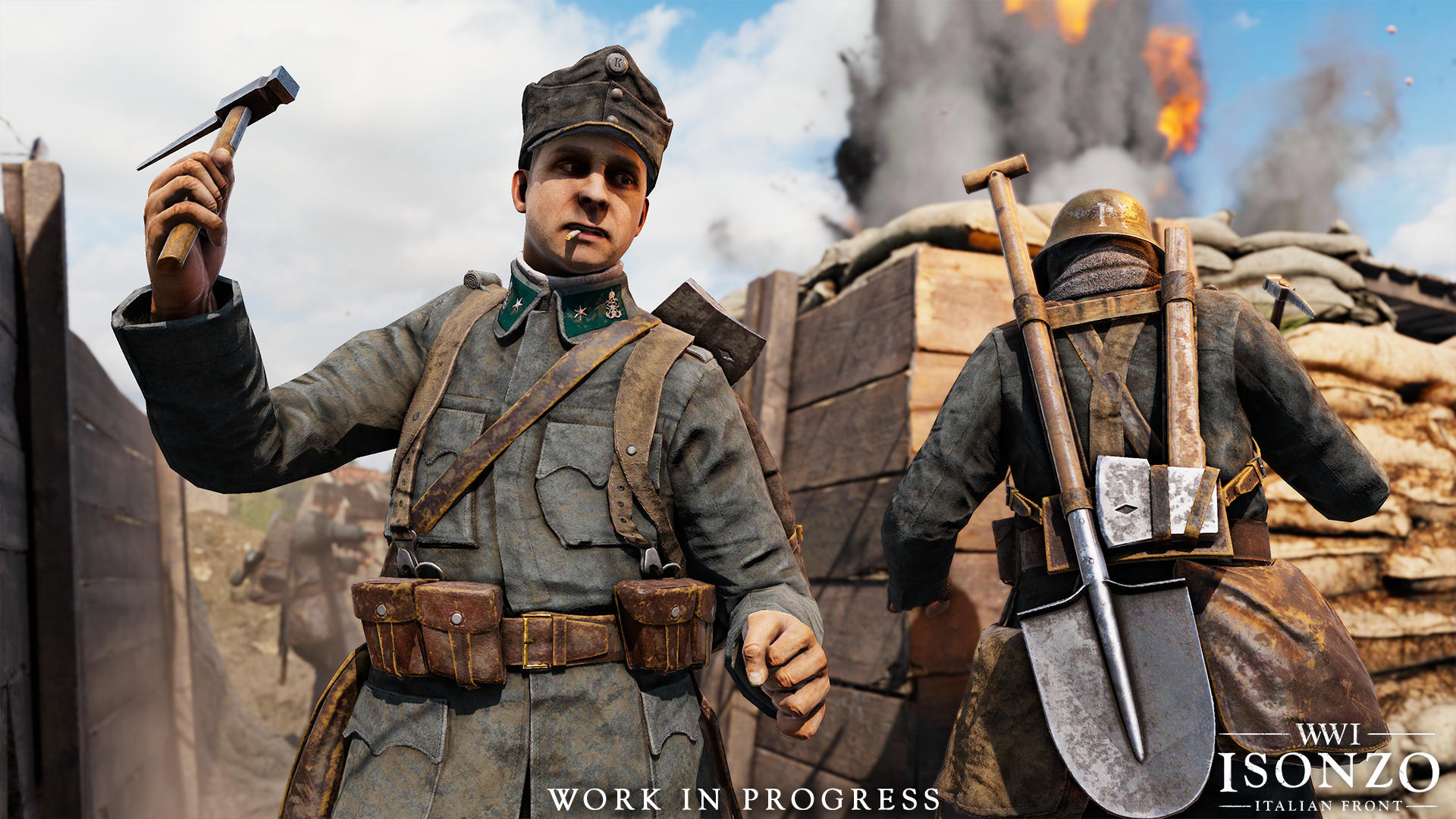 Engineers can choose from a few different rifles, sidearms, and grenades if they wish, but combat isn’t their primary task. Instead they should be focused on supporting their team in a few different ways. First off, engineers can build heavy weapons in pre-set locations on each map. This includes heavy machine guns and mortars - the firepower of these weapons can be game changing.

Second, they can very effectively build and cut wire - often there will be nearly impenetrable lines of wire facing attackers when the battle begins, only needing defending engineers to close up a few gaps. These chokepoints will be high priority areas for both sides. Attacking engineers can more quickly cut wire, or potentially even blow it up to prevent the defenders repairing it.

In Isonzo, certain classes are able to build fortifications which can be freely placed anywhere with enough clear space. The Engineer has the widest variety of things to build, all focused on providing cover to allies or providing obstacles to enemy movement. All buildable items in Isonzo have a maximum amount which can be built at once - there is a per team limit, and a per player limit. So as an Engineer your team might be able to build 20 sandbag positions, and you personally can place 5 of them. It takes a short time to put things together, and you can deconstruct them as well (including enemy items). Let’s look at what kind of things you can build…

There are two forms of sandbag available, one straight piece of sandbag wall, and one curved sandbag position. The curved sandbags are ideal for standalone defensive positions where you want to provide a little cover against flanking enemies. The straight sandbag walls work better when combined into a larger position, or as an extension to map features like buildings, stone walls, and ruins. In some places you might be able to use sandbags to hinder enemies trying to climb onto ledges. 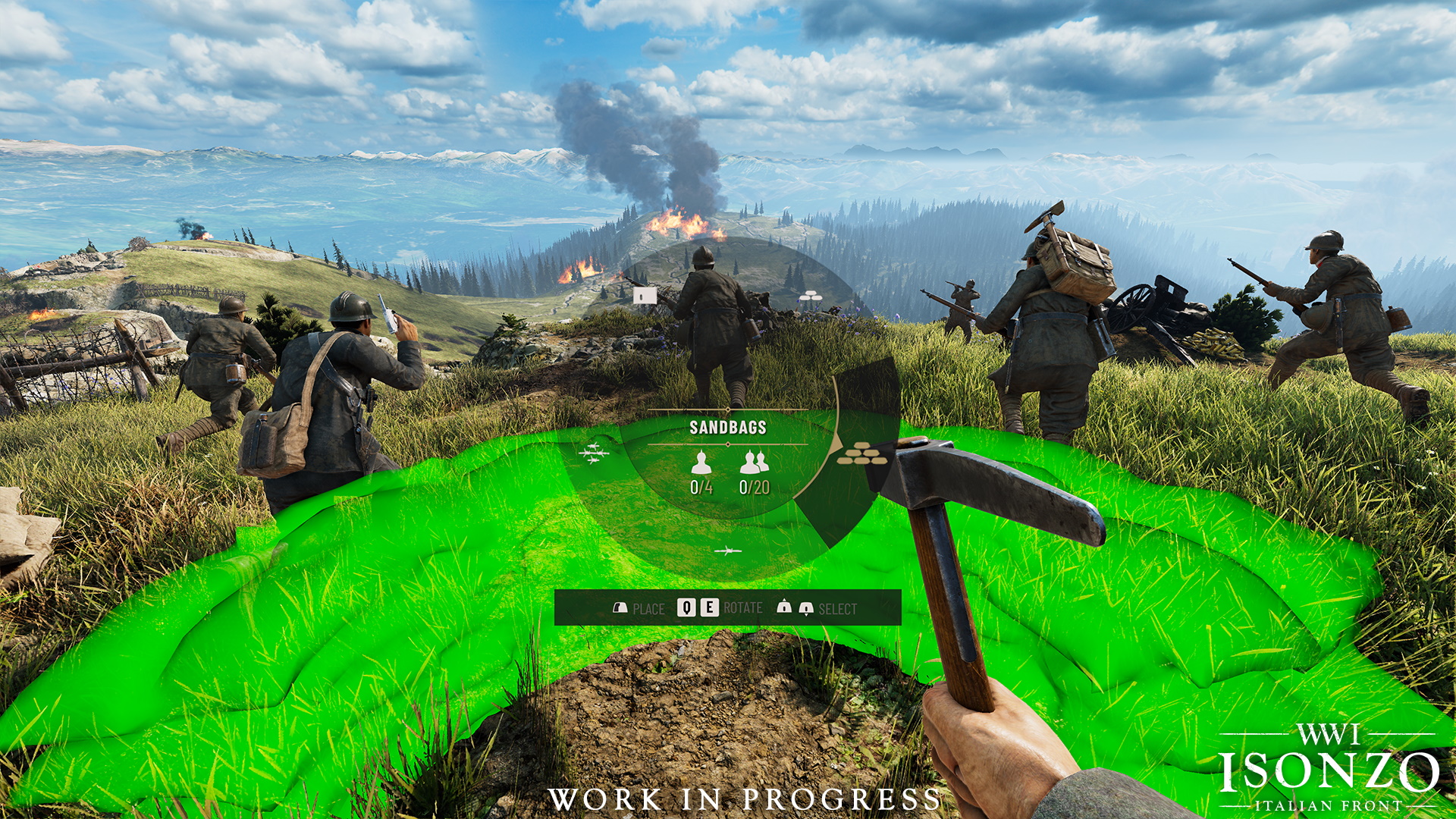 Barbed wire works exactly as you’d expect, slowing and hurting soldiers who get caught up in it. There are two types available, but we’ll go into more detail in a future dev blog.

These specialist items are small metal shields with a firing slot in them. When carefully positioned they will protect a soldier from enemy fire while allowing them to shoot back. However, finding a good spot with a decent field of view through the tiny slot is not easy!

An engineer constructs a sniper shield.

Engineer perks tend towards construction and demolition. The Sapper Company perk gives a bonus to planting and defusing sabotage bombs, making it equally useful when attacking or defending. Support Company gives a bonus to operating heavy weapons: for instance faster reloading and aiming. This has natural synergy with the Engineer’s job of constructing those heavy weapons, allowing them to then provide better fire support to their team. The Death Company perk gives players body armor they can equip during battle. As with the marksman armor, it protects from explosions and suppression - useful when trying to build or sabotage under fire! 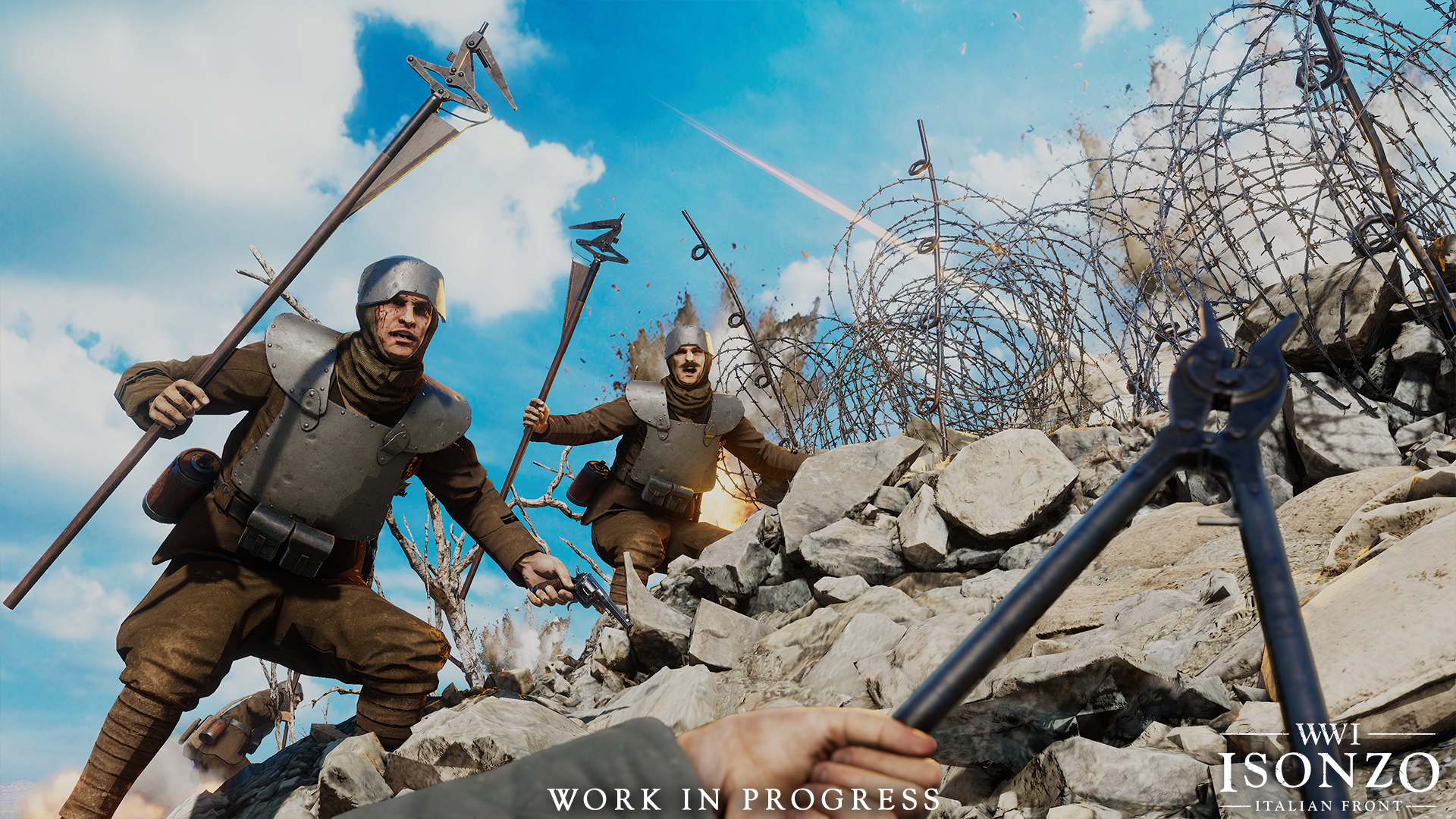 We hope you enjoyed meeting the engineer…

See you next time and don’t forget to wishlist Isonzo!

Our new Isonzo Intel covers the artillery support options your officers can call for in Isonzo! From mortars to creeping barrages...

Today’s Isonzo Intel looks at the Marksman class - their equipment, perks, and a little history.

We complete our visit to Gorizia, including the complete flyover video!

The Gorizia map is the focus of today’s Isonzo Intel, but we’d also like to share that the launch is set for Summer 2022!

Reminds me of Hell Let Loose; which I am currently playing and recommend while we wait for Isonzo to come out.

Well you could play Verdun and Tannenberg whilst you wait also

Cannot wait! All I've been thinking of is the glorious moustache I'll have on my face as I charge into battle!

so hyped it looks amazing!

Well done guys for the nomination. Been a fan of the WW1 series for a long time.

Gonna be the best game of 2022, even though all the gaming news stuff only will cover whatever dumb new cod or bf trash reskins come out

i am excited about this game