Sorry about the delay of this blog, as you may or may not have picked up, we had a Q&A session yesterday, and we wanted to give those who turned up for it extra incentive in the form of an early look at the developments we have made over the past weeks. As usual bear in mind that lots of the work featured may be WIP and very much subject to change and development. With that being said, lets dive into the third dev blog!

On the texturing side of things, Matt is killing it as he always does, and has continued his exceptional pace over the past two weeks to texture a number of key items modelled by Rafael. The most prominent of these is the characters clothing-I am sure this will come as a relief to those who are tired of the shirtless, bald shinobi who currently serves as the in game character. As well as the clothing, Matt has textured and retextured 3 new swords, all of which will serve important roles in the personalisation of play styles when the kenjutsu system is released- as each sword will have its own specific set of attributes. Finally, Matt has started work on earth dome texture, and since starting in the stream yesterday has already finished the texturing of the 16th building of hidden hill. All the pictures for these new textures are shown below. 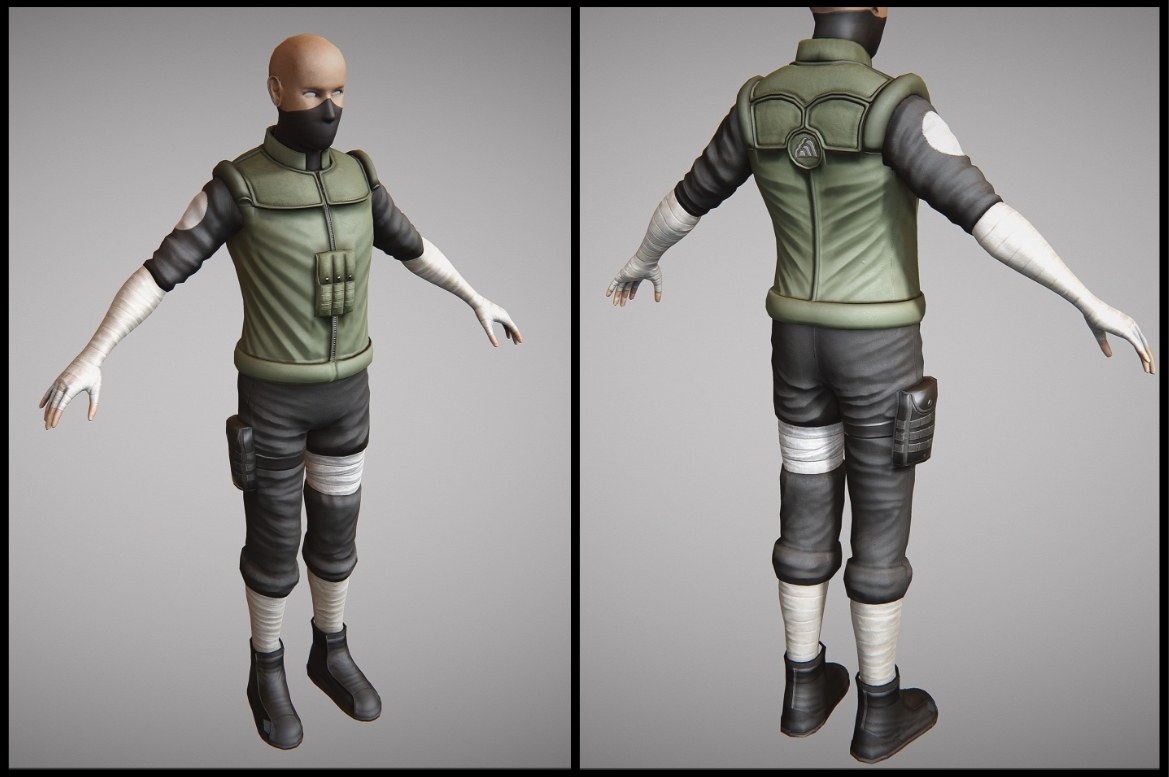 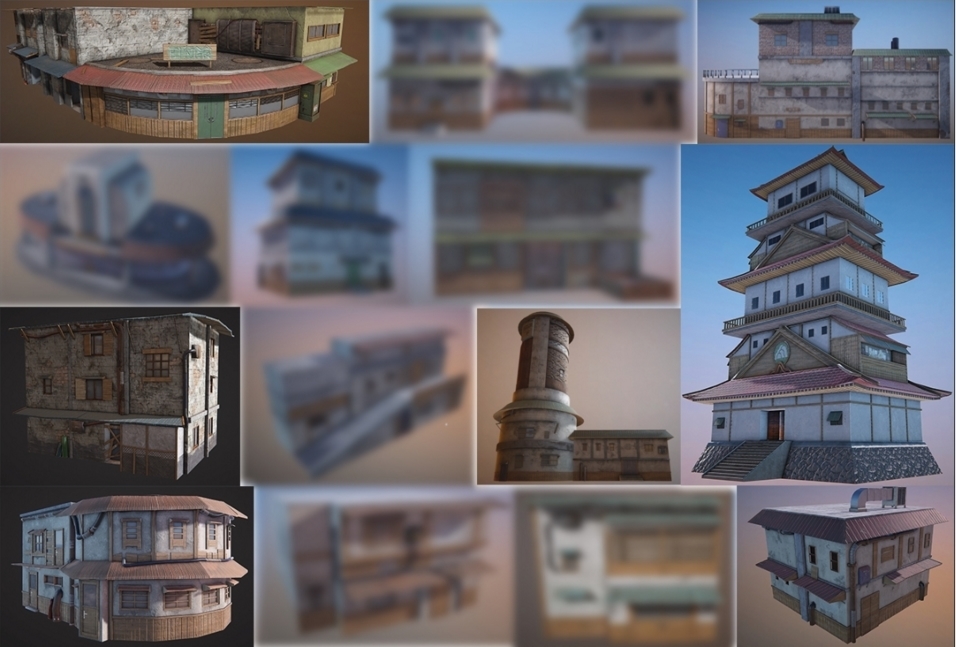 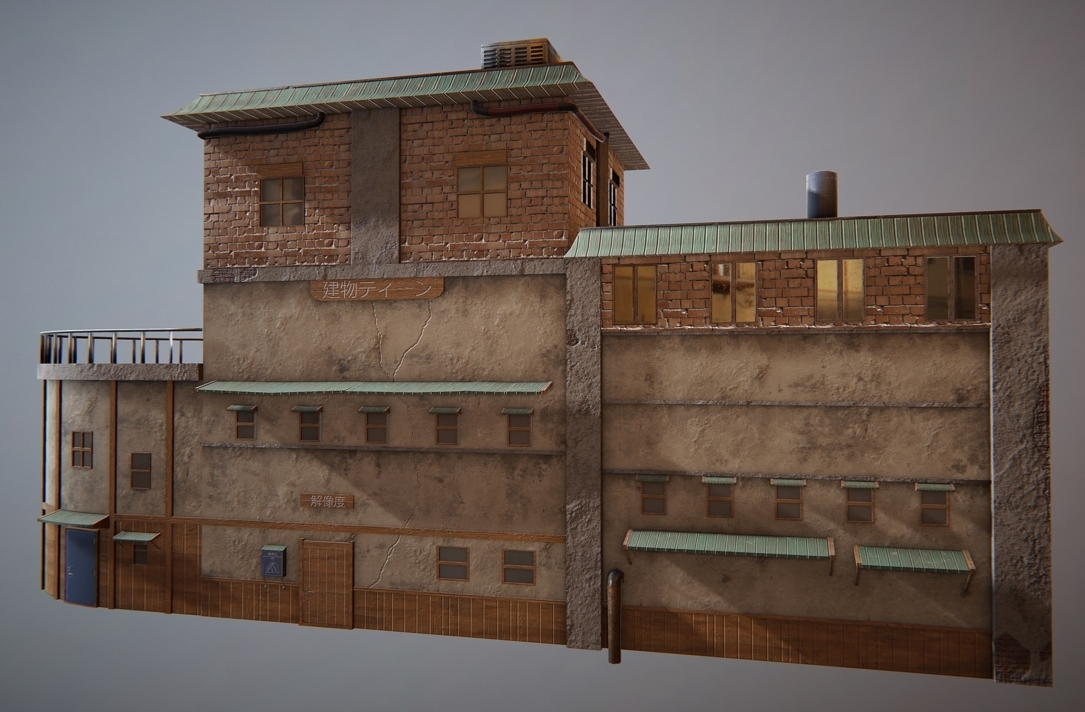 In regards to modelling and animation, we have a new member to formally introduce to the community, Othman, our 3D Generalist. Othman has ability and experience in both these fields, and so the first task we set him was the creation of an updated animation for the earth dome jutsu based on the top pick of the ‘thumbnail’ style animations made by Vreg shown in the first dev blog. Since completing this task, Othman has begun work on re rigging and skinning the new character to work more fluidly with the current animations and the future animations which will be made by him. Furthermore, picking up the mantle from Rafael, Othman has begun work on the hair for the character, and although he has made rapid strides, continued development will be required to achieve the quality we want (look at Final Fantasy hair for a good reference). On Rafael’s end he has continued to work alongside Matt in polishing buildings for texturing and splitting up buildings into parts in order to achieve modularity- meaning floors or parts of buildings can be duplicated and used throughout the village.

For concept art, I have begun work on the final concept for the hidden snow village, and have made some good progress, laying down the groundwork in regards to colouring and mood. However, at this point I’m refraining from showing anything until I deem it has reached a stage that illustrates the village properly. Unfortunately, Daniel is still wrapping up some Freelance work, but once that is fully completed he will be back to designing all manner of buildings, weapons, props, characters and environments.

Depending on whether you follow our composer Rustam’s Soundcloud account, you may or may not have seen the beautiful tracks he has been making for the game. Over these past weeks he has made a brand new song entitled ‘Spring In Our Village’, aswell as, over several iterations, creating a great sound effect which will be used in game for our earth dome jutsu. For an idea of what this jutsu might look and sound like in game, I recommend playing this sound alongside the gif of earth dome jutsu animation.

Unfortunately Vreg has been buried in work for an important upcoming exam and therefore has been unable to do any concrete work for the game, however he has continued to guide the team in creating content that meets his vision for SLO. As well as this, he managed to attend the stream yesterday where he answered a large number of questions the community had about the game. This stream can be rewatched in full on our twitch channel. In regards to the Q&A stream, we thought it was a success and a fun way of showing off our developments made as a team whilst also answering any queries you guys may have. As a result, we plan to host more of these in the future, perhaps having one every month/other month.

And with that, the third dev vlog is complete. will be back in a fortnight with more development, and more progress. Until then, sayonara shinobi’s!