In which the demo is released; a serious bug exists in the current demo build; a new demo-build is planned; various materials are made and posted leading up to demo-release; the game sees minor touch-ups ahead of demo-release; and the "Wandering Visual Novel" project has a pretty-much complete character editor.

This week, instead of a screenshot, let me post the cover-tile for the demo, as shown on itch.io and IndieDB: 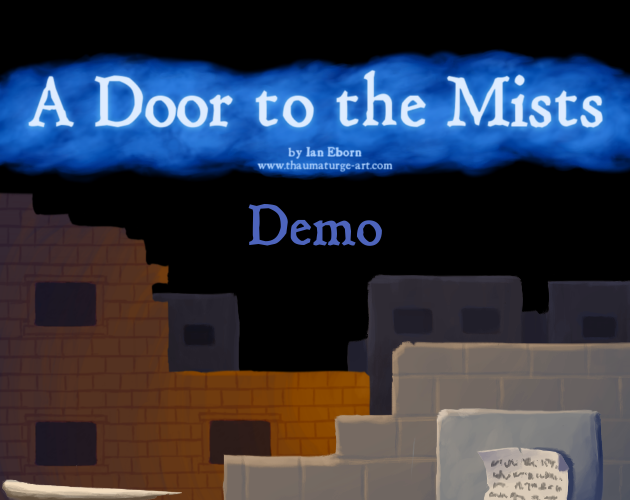 Perhaps the biggest news this week is that the demo has been released! :D

The demo is hosted on IndieDB, and should be available from the game's IndieDB page:
IndieDB Page

The demo also has a page on itch.io; the download links provided there there draw on the hosting on IndieDB:
Itch.io Page

However, it seems that there is at least one serious bug in this build, so I'm hoping to upload a new build this week--perhaps sometime around Tuesday. (And on top of the bug-fix, I intend to include a few minor touch-ups in the new build, too.)

Thus I recommend that if you want to try the demo, you wait for that release.

As to the things done in the week just past:

To start with, the week just past saw various preparations made for the release of the demo. Offhand, there was the setting up of a page on itch.io, and the creation of new bits of art to be used both there and on IndieDB.

And over the course of the week, I posted a series of promotional items leading up to the release-date: specifically, the four trailers that I made for the demo, and a pack of wallpapers (for both PC and mobile) related to the game.

If you want to download those wallpapers, you should find them here:
Wallpaper Pack

As to the trailers, here is the main demo-trailer; the others can be found either by links given at the end of each video, or simply by going to my YouTube channel, I believe.

As to the game itself, you may recall that in last week's post I mentioned that there were some issues that remained to be attended to ahead of the demo. Those were all, I believe, fixed in the week just past!

(This included a rather serious issue in which the game crashed if one loaded a save that was made while holding a carriable object! o_o; )

I also implemented a few additional touch-ups and changes in the game.

Perhaps most salient of these is that I swapped the non-mouse controls in the "jigsaw puzzle" minigame:

Previously, I had the movement controls (e.g. WASD or left-stick) moving puzzle-pieces, and the looking controls (e.g. right-stick) rotating them. This made sense to me.

However, when using keyboard-and-mouse controls, it seemed to me most intuitive to have the mouse moving the pieces, and the movement keys then rotating them. But with the movement keys already assigned to moving pieces, they weren't available for rotation.

I had tried to solve this by assigning rotation to the "jump" and "crouch" keys--but this really didn't feel at all intuitive to me.

So, in the week just past, I swapped the non-mouse controls for this puzzle: now the "looking" controls move the pieces, while the "movement" controls rotate them. Along with a minor update to the menu-system's logic, this allowed me to use the movement keys for piece-rotation when playing with a keyboard and mouse, while still (hopefully) having functional non-mouse controls.

And finally, as to my "Wandering Visual Novel" side-project, I believe that I have the character-editor pretty much complete! (Not perfect, perhaps, but functional, I believe.) Here is a video showing its use: