This week Ian talks about the addition of enemy HP bars and the impact weapon skills will have on the game.

Hey everyone, Ian here, game designer and artist for Crimson Keep. Over the last couple weeks we've added a weapon skill system, introduced HP bars and damage text for the enemies, and completed the first pass on all of the cave rooms. Moving forward we're starting work on the next area, The Crypt. Ben is also working on setting up the game for progressively harder areas, allowing us to swap out monsters for harder ones as you get farther into the game. 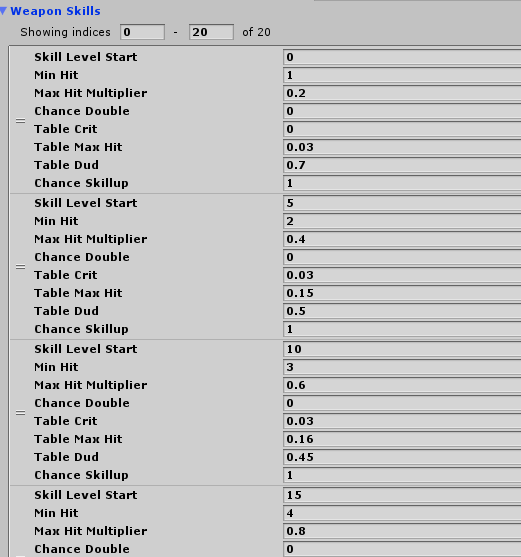 I've had a love for systems like this in games for a long time. Basically every time the player hits an enemy they have a chance to raise their skill with the weapon they're using. As weapon skill goes up it reduces the chance that their attacks are duds, increases their potential damage, chance to crit, double attack, and so on.

My main inspiration for this system is the original Everquest, which managed to addict me, largely in part to this "minigrind" within the normal level grind. Watching your skill go up somewhat rapidly, and knowing and feeling a tangible increase in damage/effectiveness is a great feeling. There's another game design concept that I connect it to, that I don't really have a name for, but Doom is a good example of it. Everyone loves the guns in Doom, they feel good to shoot, sound cool, some of them are more effective at certain encounters, they're great. Well, all except one weapon; the pistol. Doom's pistol feels terrible. You might lump the fist attack in with the pistol, but that berserk powerup makes even the fists awesome to use. Once you have the minigun you will straight up never use the pistol again. The pistol sucks, but I believe it sucks by design, and it's important that it sucks. The fact that it sucks makes everything else feel cooler. And by the same token our weapon skill system starts the player off doing very low damage, and as annoying as that is, it makes it that much more rewarding when you are kicking ass later.

I decided the HP bar and damage text was our next priority simply because the skills system was so difficult to test and feel out without some indication of how much damage you're doing. For the HP bar it came down to a decision between the screen mounted Diablo 2 style bar that sits at the top of the screen, or the Dark Souls style bar that follows around enemies, showing up when they take damage, and fading away after several seconds. As you can see we went with the Dark Souls style. I think the Diablo 2 style hp bar works, but only if you don't want to show numbers, but because of the incremental skills system I talked about earlier, I definitely wanted to show numbers. If we showed damage numbers with the Diablo 2 style HP bar, the player ends up just staring at the top of the screen watching the numbers. With our system, the player's vision is focused on the enemy. Their eye is reading their movements, tells, remaining HP, and their own damage, making the main area of information tight and readable. The only real difference from the Dark Souls HP bar is the damage numbers. We opted to not add them up, so the player would have quicker understanding of how much damage each hit was doing without having to do math in their head (not my strong suit).

And as I mentioned, we've begun working on the environments and new monster types for the Crypt, which is the area that follows the caves/mines.

Thank you everyone for your continued support and interest in the project. We'd like to get the word out about the game as we get closer to submitting to Greenlight, so we'd love it if you would share us with your friends. We made a headtalker campaign to help facilitate this: Headtalker.com

As always feel free to comment with questions, or thoughts you have about the game.

Nice write up. I agree with what your saying about the weapons, and it applies to many other things too. I think it's about making each mechanic provide feedback that is satisfying, feels rewarding, and the more of the player's senses you manage to reward the better it gets.

is the game going t be skill based or a stat grind? and what can you say about its reliese like a date?

The plan is to make it a hybrid. The effectiveness of the player character will be:
1. xp level/weapon skill level (comes from grinding)
2. equipment (randomly finding items to equip from enemies/barrels/chests)
3. player skill

We're trying to make a game that marries the progression and rewarding feelings of an RPG but doesn't allow the player to slouch by using a super tanky build, and requires the player to be aware and have quick reflexes at all times.

so the gameplay will be somthing like. if you play well/skillfully the outcome will depend on the stats that youve achieved, but if you lack skill and awareness the enemies will own you?

If you play good enough you should be able to win every time, kind of like the Binding of Isaac. But stats, items, etc. along the way will help you reach that goal.

Looks promising. I like how the skill system progresses. It's similar to Skyrim's skill system.