The new 1.3 update is here! Introducing a revamped World Map menu, Save/Load features and a progressive linear campaign. Control your virus from high above, and then enter the city-level view to micro-manage your forces. Also, we are awaiting release on Desura!

Players will now be able to start new games and continue where they left off the next time they run the game. The game now supports multiple cities, allowing the player to order his/her forces to roam from city to city, eradicating everything in his/her way.

Once a horde enters a city, the player can either wait for more forces to come to aid or deploy and attack the city. The game then enters the standard city-level view and depending on the outcome of the battle, the player will either lose the attacking force and be pushed back by humanity or capture and infect the city in all of its entirety, gaining new and fresh forces in the process.

Once the player starts a new game, he/she is immediately thrown in a fresh battle for the country of Venezuela. Only after a successful capture/defeat is the player introduced to the World Map. At the current moment all cities are identical with varying degrees of difficulty depending on the city size, however this is only a current system and will be changed by the next few updates. A new trailer showcasing the new World Map system is coming soon.

On side news, we have also been approved for Desura and are now awaiting a release date which was stated to us as being in 1-3 weeks. We are very excited to start monetizing this game and we are getting closer to a paid full version with every update. 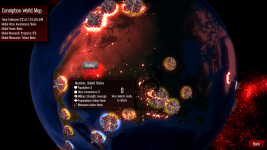 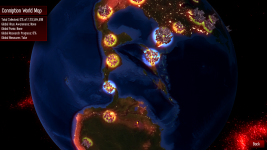 Thanks for your time,
Gabriel

That is one sexy world map!