The first article of a series of articles. Changes is an online survival roleplay game in development. It comes with a focus on historical and folklore fantasy topic. The action takes place in Central, East and North Europe in the era of Barbarian Kingdoms. A player is involved in the atmosphere of early Middle Ages and trying to adapt to a constantly changing world.

My name is Anton Starastsin and I am from Belarus. I am going to start a blog – series of articles – about the development of the game. I develop this game solo but I hope it will not last forever and somebody will be interested in it too. Anyway, it would be great if you find this article and game concept as some kind of fresh air or just enjoy reading. Also I want to write about three key features that make the game unique and interesting. 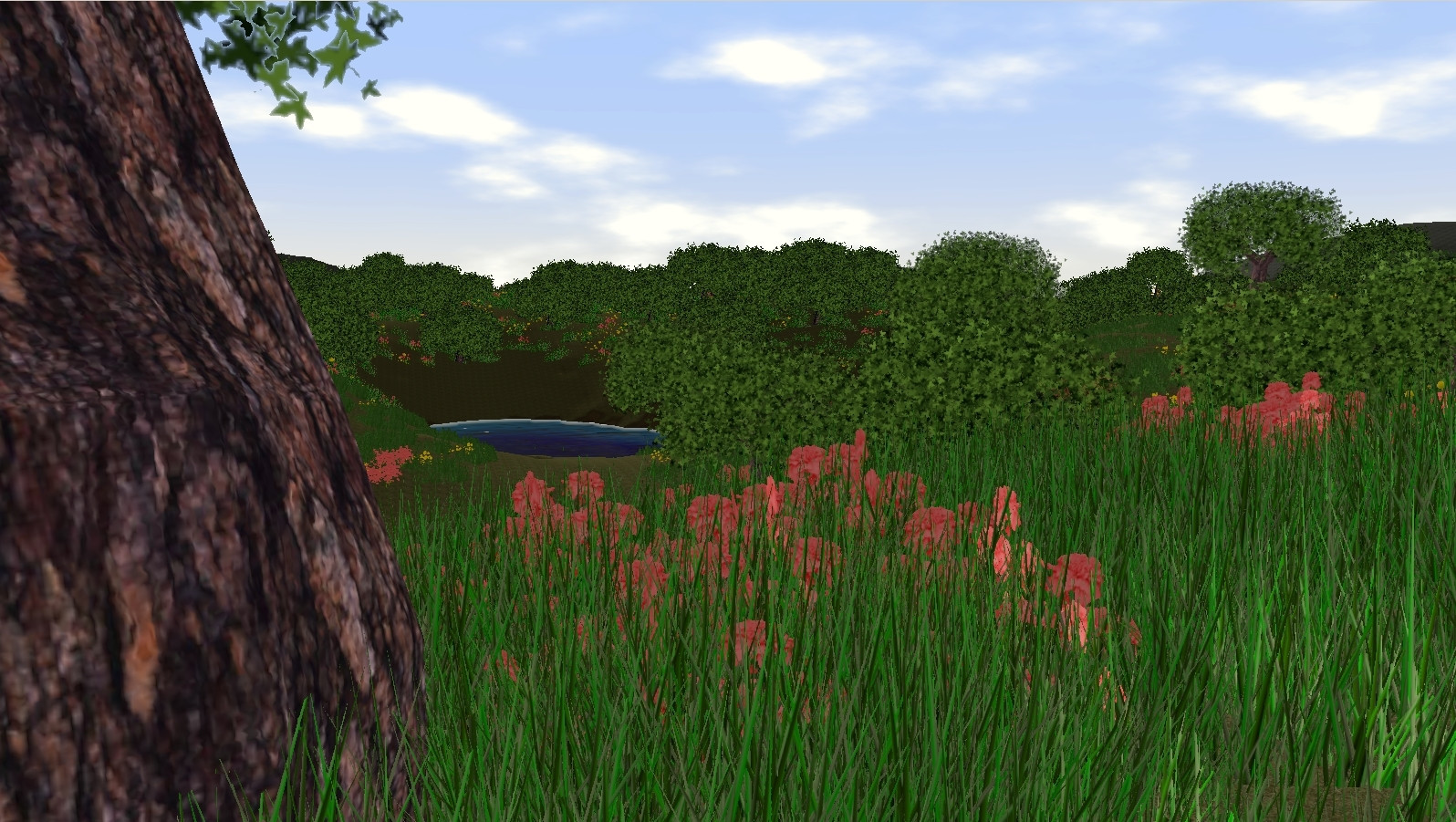 Changes is an online survival roleplay game with a focus on historical and folklore fantasy topic. The action takes place in Central, East and North Europe in the era of Barbarian Kingdoms. A player is involved in the atmosphere of early Middle Ages and trying to adapt to a constantly changing world. Are you going to build a fortress with friends in the wilderness and spread Christianity among heathen tribes and receive blessing from the Pope? Or take part in berserk gang and perform human sacrifices to please Gods on the Blót? Don’t forget about hordes of nomads from East who will burn your earth and take away your buddies into slavery.

This game is in the early stage of development. However, many things have already been implemented: world and environment generating like grass, trees, day/night. Roleplay system, including perks, levels, inventory, hunger and so on. Multiplayer is fully supported: you can chat, kill each other, cut trees together etc.

In the near future I plan to add craft and building system, regions and global events based on these regions. Of course everything will be improved, especially UI’s design, player model and graphics. It would be great to post progress in the following articles. So don't worry about quite horrible user interface, it will be redisigned as soon as possible.

Changes is being developed in Java using jMonkey Engine and some libraries. With special emphasis on: accessibility – you don’t require modern computer to play, 32-bit systems with old CPU and GPU can afford game’s client version, and it is regularly tested; flexibility – if people want to change something in the game (add new king of object, perk, or even more impressive) they just need to have basic programming skills.

But the main idea is to make you forget about real life and realize that you take care of the gods' favour more than of your tomorrow deadline. 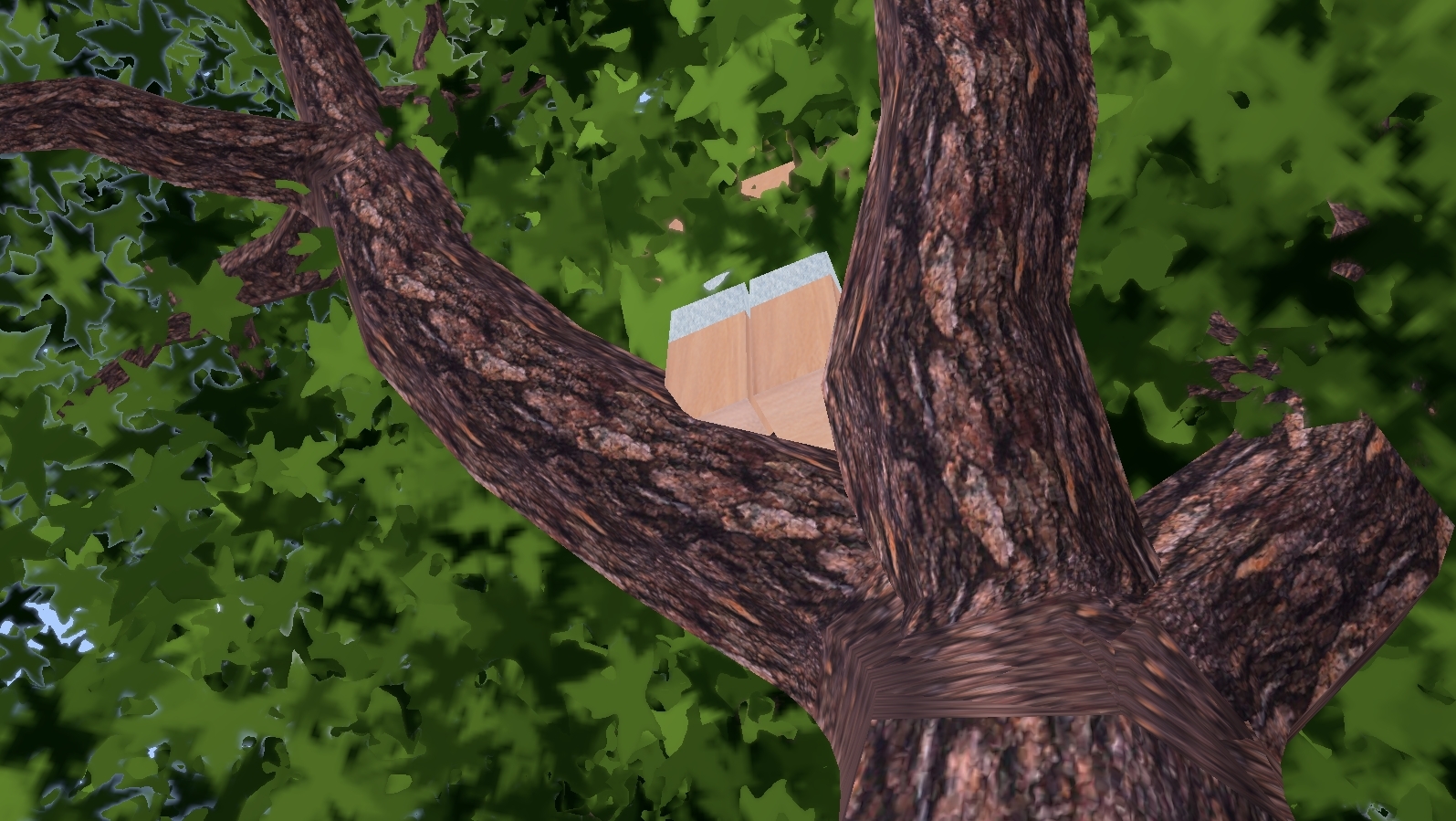 There are no static objects. Everything is loaded from the server. Syncronization system prevents "item" cheating like spawning or deleting something without server permission. Also objects are cached on client's disk so no fast network is required. 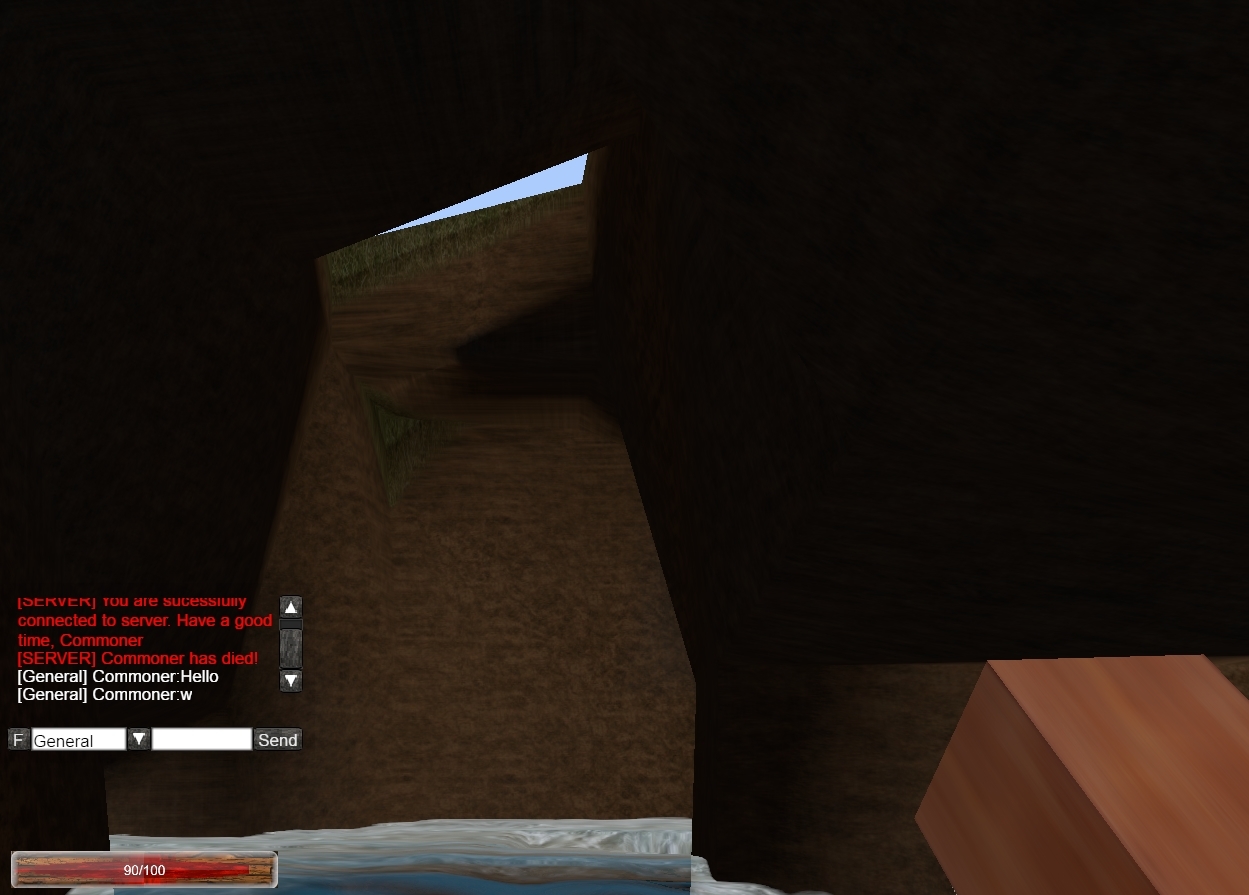 World supports cave generation. And even players can modify it. However, terraforming will be very expensive, limited, rare and not aviable for everybody because as well as in the old days characters do not have modern tools and most of them are not heroes with supernatural strength.

Land of the ancestors. Dynamic challenges.

One of the main ideas in Changes is to make player feel himself as a part of the living world and every game session turns into a sage, a fairy tale, a legend we have seen in a book or a movie. So the world on each server looks like a small (or not a small) part of Europe. And it is divided into several regions. Some of them are full of iron ore, fertile soil and solid wood while others are impassable swamps full of pavetryks (evil spirits), dangerous insects and infections.

There are a lot of exciting challenges waiting for you. When you play alone or with friend your chief enemy is environment: without technologies and manpower all wild animals and spirits turn into a serious threat, cataclysms like plague and drought can cover region where you live. When you play on a server you are going to fight for better regions – never let strangers in your castle or tribe and do not build monasteries near shores. 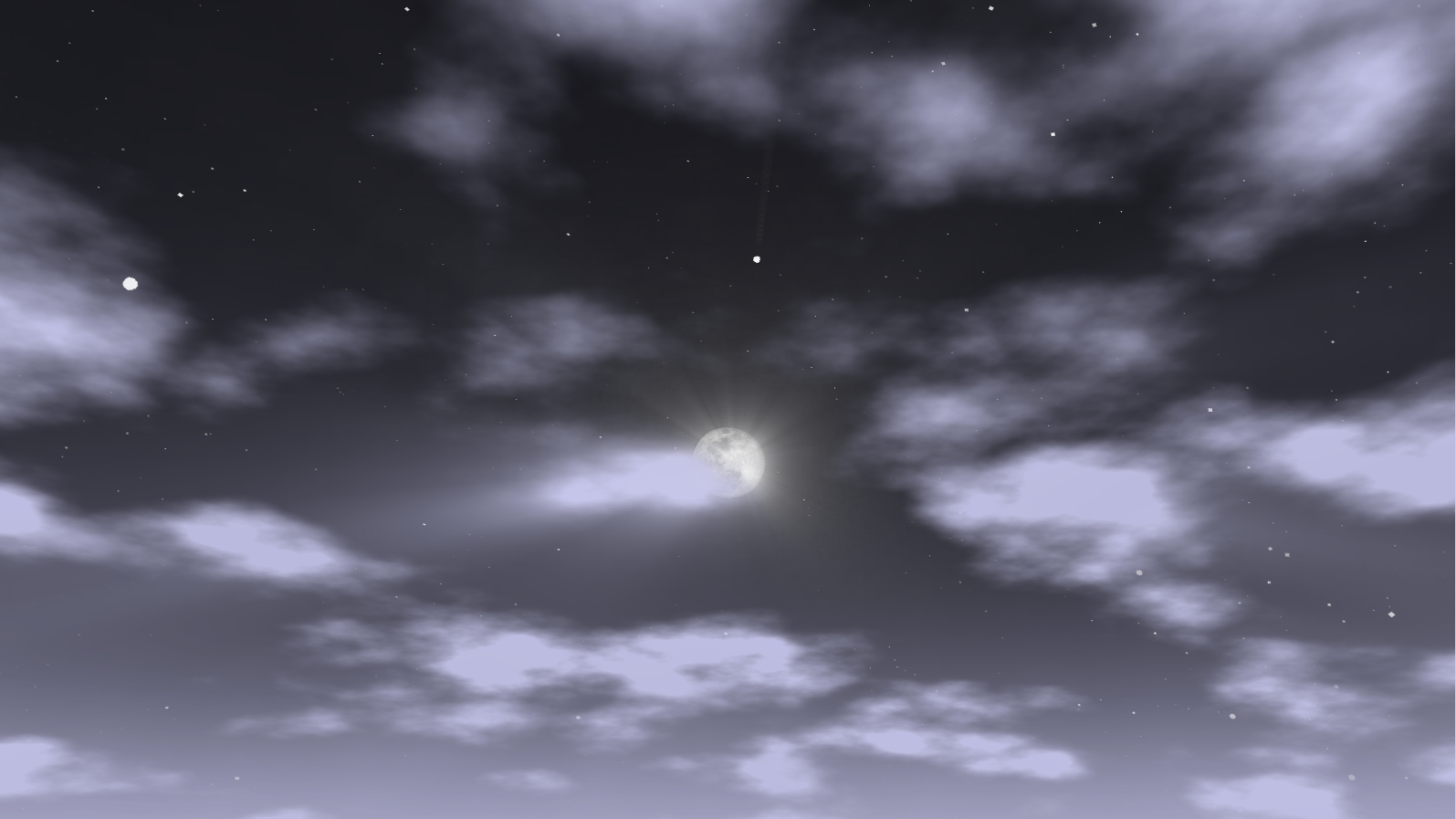 To each his own. Roleplay system.

The second biggest idea is deep roleplay system that adapts to your style and preferences. There are three different types of character and society development: Feudalism, Tribalism and Despotism. Do you prefer farming, feel good when see impressive castle of your guild, do you want to get incredible weapons, armor after hard work? Then Feudalism is suitable for you. Are you a lone wolf or just hate spending your time on mining and craft? Look for tribal. Here is a short description:

Feudal society. Weak at start and quite slow, but get the best technologies and weapons if there is a chance to progress and expand. Strong in defense of their settlements. And if they live in prosperity, each member will have a lot of heirs (lose only small amount of experience/level).

Tribal society. Ideal for solo players or small companies that don’t like farming at all and want to get fun right from the start of game. Easily get levels and experience, can survive in wildlands and have resists to diseases, hunger, thirst. One of their best weapons is ambush.

Despotism society. These guys neither so strong at start (i.e. without buildings/good steel weapons) as tribes, nor could effectively mine and collect resources as feudal kingdoms. But they can be very dangerous if gather in big groups. Their power lies in strong auras and ability to demolish castles and burn lands. Best choice for aggressive and big guilds/groups. 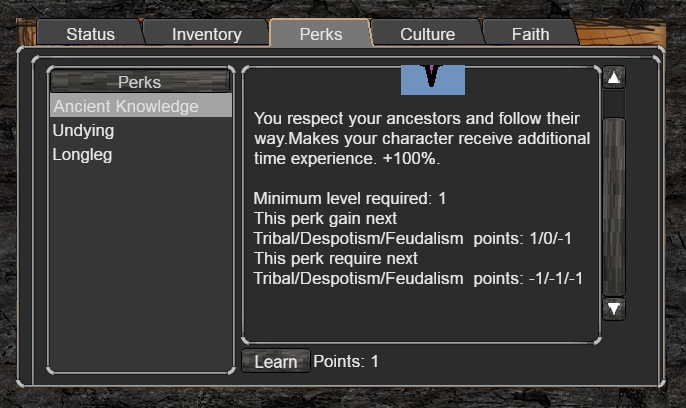 Perks significantly affects the character. Some of them are avaliable for everybody but most of them under several conditions. Like savage can not learn how to be so great blacksmith as civilized character. So choose carefully. 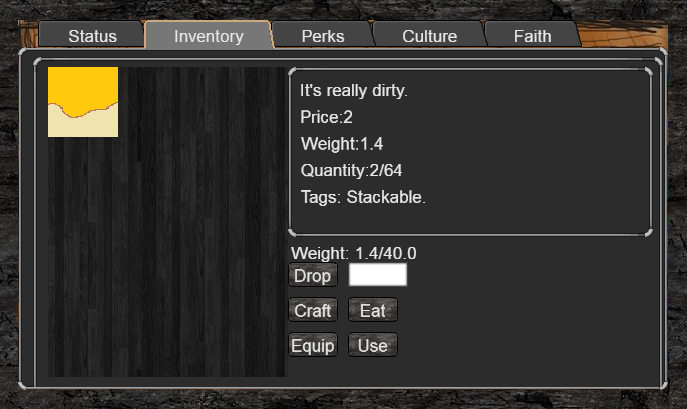 This is prototype of inventory. There will be more sophisticated icons and abilities to interact with items. I bet you have stuck once in the situation in some game where your character is hungry and no food around. So now you can try fight for your life and eat leaves, insects and so on.

Obscurantism. There is no longer a single key to victory.

And here is the most interesting thing. People from different societies are defined primarily by perks and religions and they will get different penalties like experience loss if they hang out with persons from another groups. So your character can mix different paths but each community should pick only one path (and closest subpaths). You can imagine perk system as triangle. And, for example, if your character gets some ability, he goes towards some path and, therefore, opposite to others.

These features are still in development, but they already have platform. In my next articles I will talk about improvements and realization; Also I am planning to show some kind of video or demo. Also I have a plenty of features haven’t mention yet.

I am very grateful to you for reading this article. If you have any advices, suggestions, questions, critics, find any mistakes in the article or want to support – you are welcome. And also if you are very interested in roleplay or maybe history and Changes, we can work together and have a great time. Everyone who would like to develop this game can join including graphical designers, modelers, java developers, etc.