There some stuff to do in the outdoors, so take your time to explore what's before the shooting.

Hey there! Happy New Year! Did you get a lot of presents this Holidays? We know, we know, it’s been a little since our last devlog, but we got something really good this time. We are ready to show you what we’ve been working for the past weeks: Immortal Redneck’s outdoors. We’ve spent a lot of time in this particular area, so we really hope you love it.

Most stuff in Immortal Redneck takes place inside the pyramids, more precisely, inside one of them at a time. That’s where you fight, survive, win new weapons, improve your skills as a player and, well, die over and over again. So it’s the main thing, it’s what really, really matters. But – there’s always a but –, before getting inside them, you need to prepare really well to survive. And that why the outdoors are so important.

It’s not the first time we’ve said this, but we wanted to make it clear again now that we have more stuff finished. Now, we can show the outdoors almost as it’s going to be.

Let’s get into detail. The Eternal Sarcophagus is the main piece of the outdoors of Immortal Redneck. After all, is the container of your soul, the sacred case where you are reborn each time Death tries to take your soul and fails miserably, the coffin that traps your essence and.. Well, you get it. You are linked to this undying mystical ‘cage’, so get use to it. Most times you won’t see it because you just get out of it each time you start the game or you die, so take a look at it. 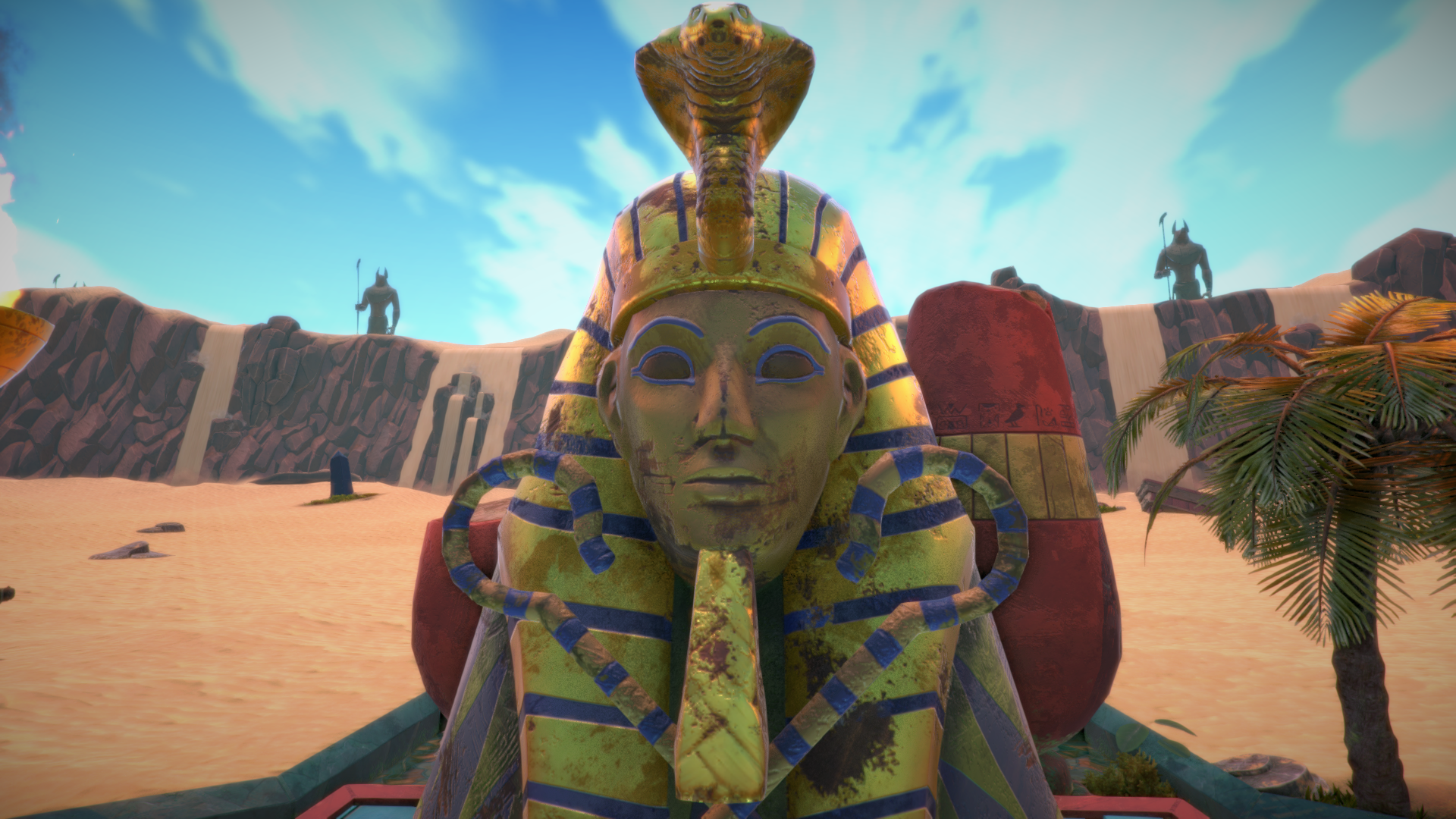 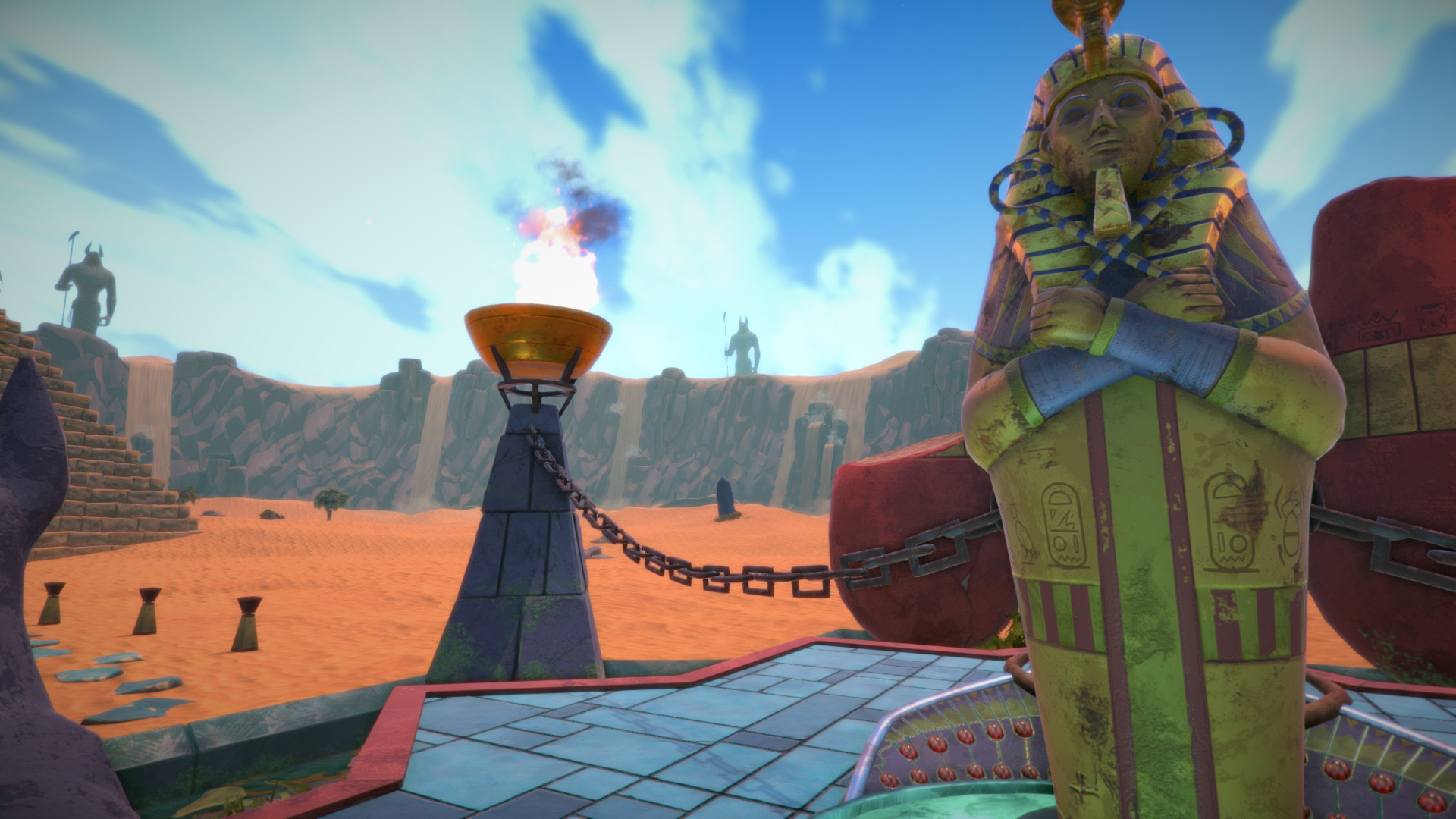 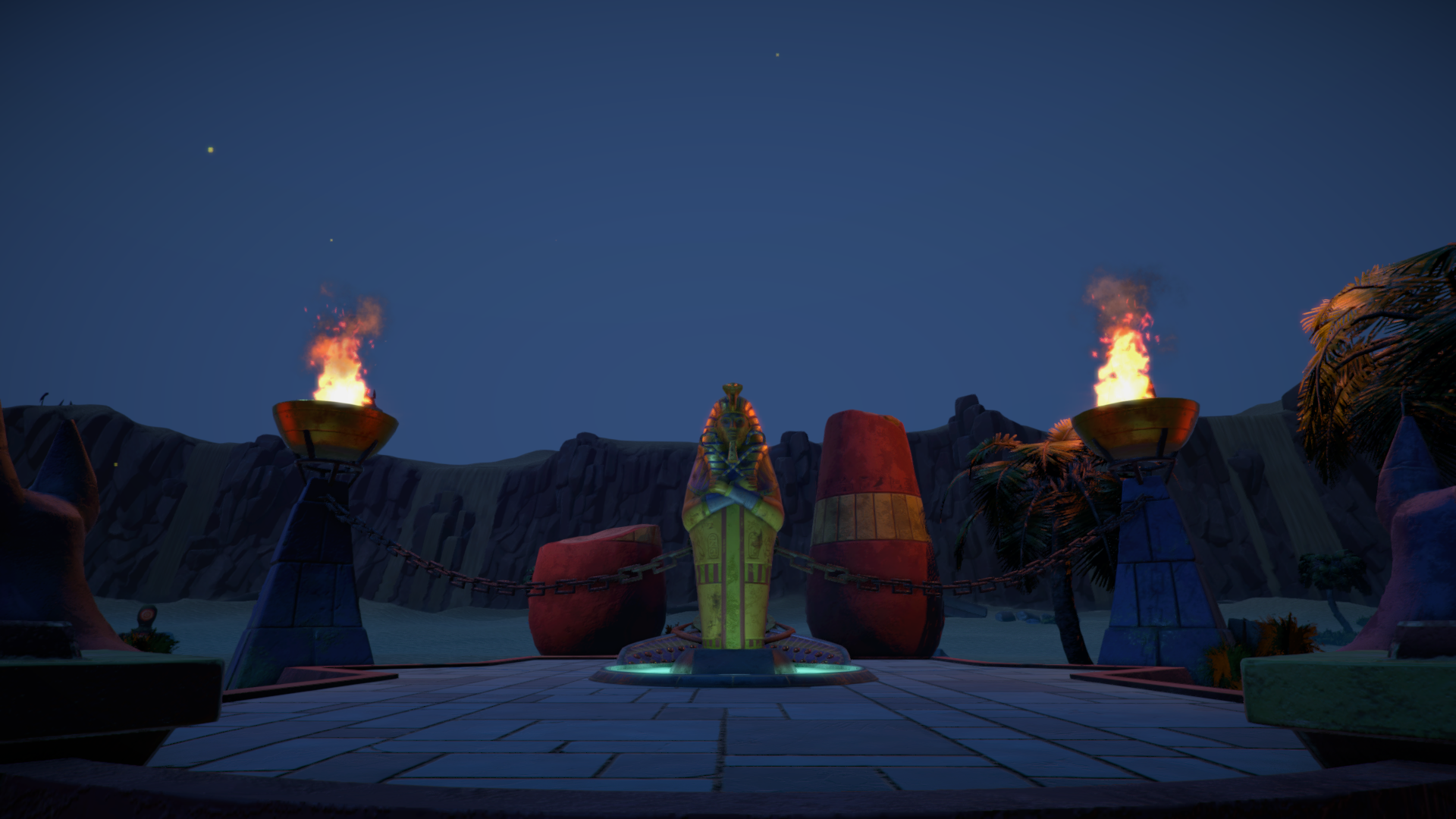 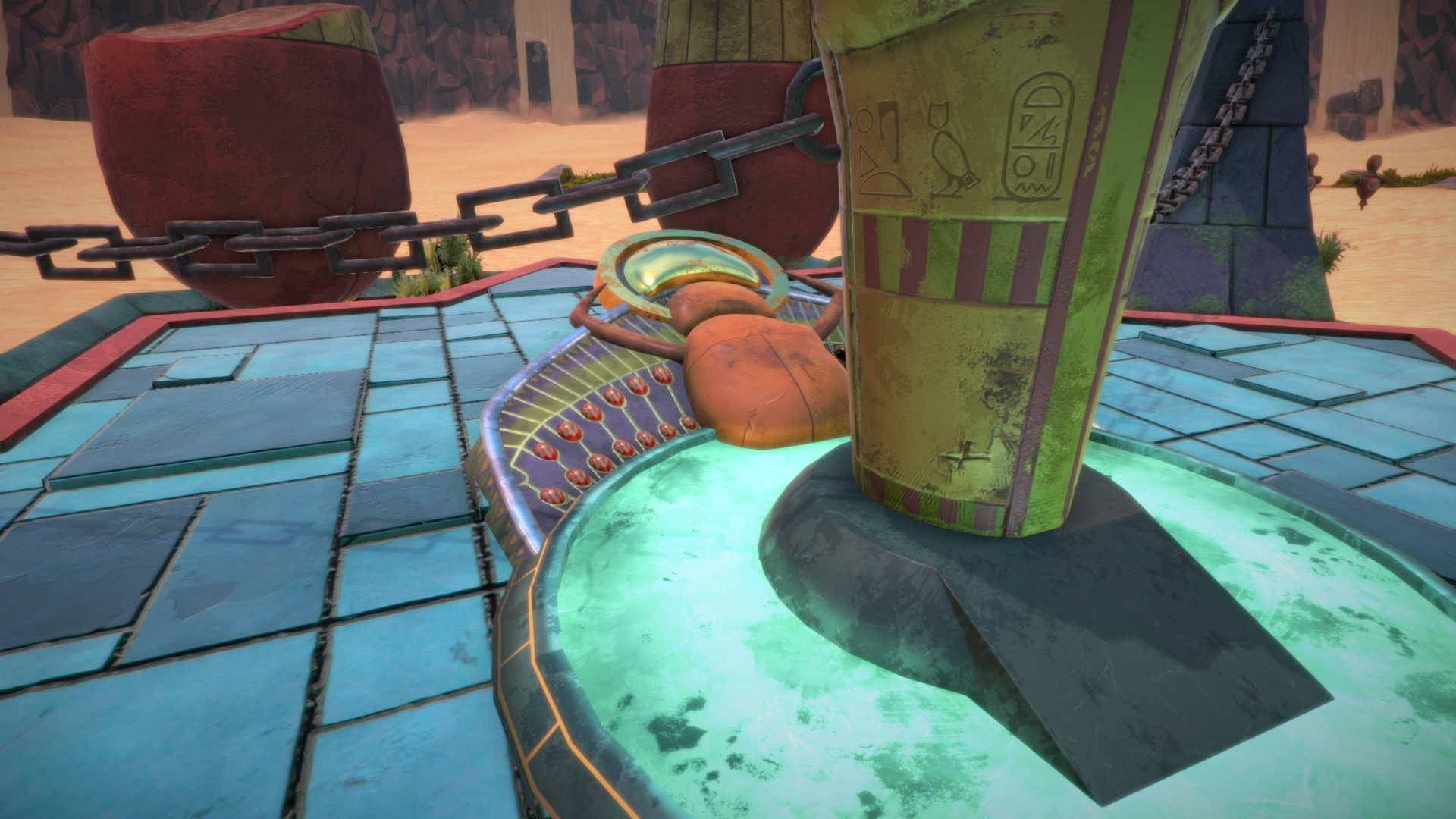 The sarcophagus podium is quite big and sits almost in the middle of the scenery. 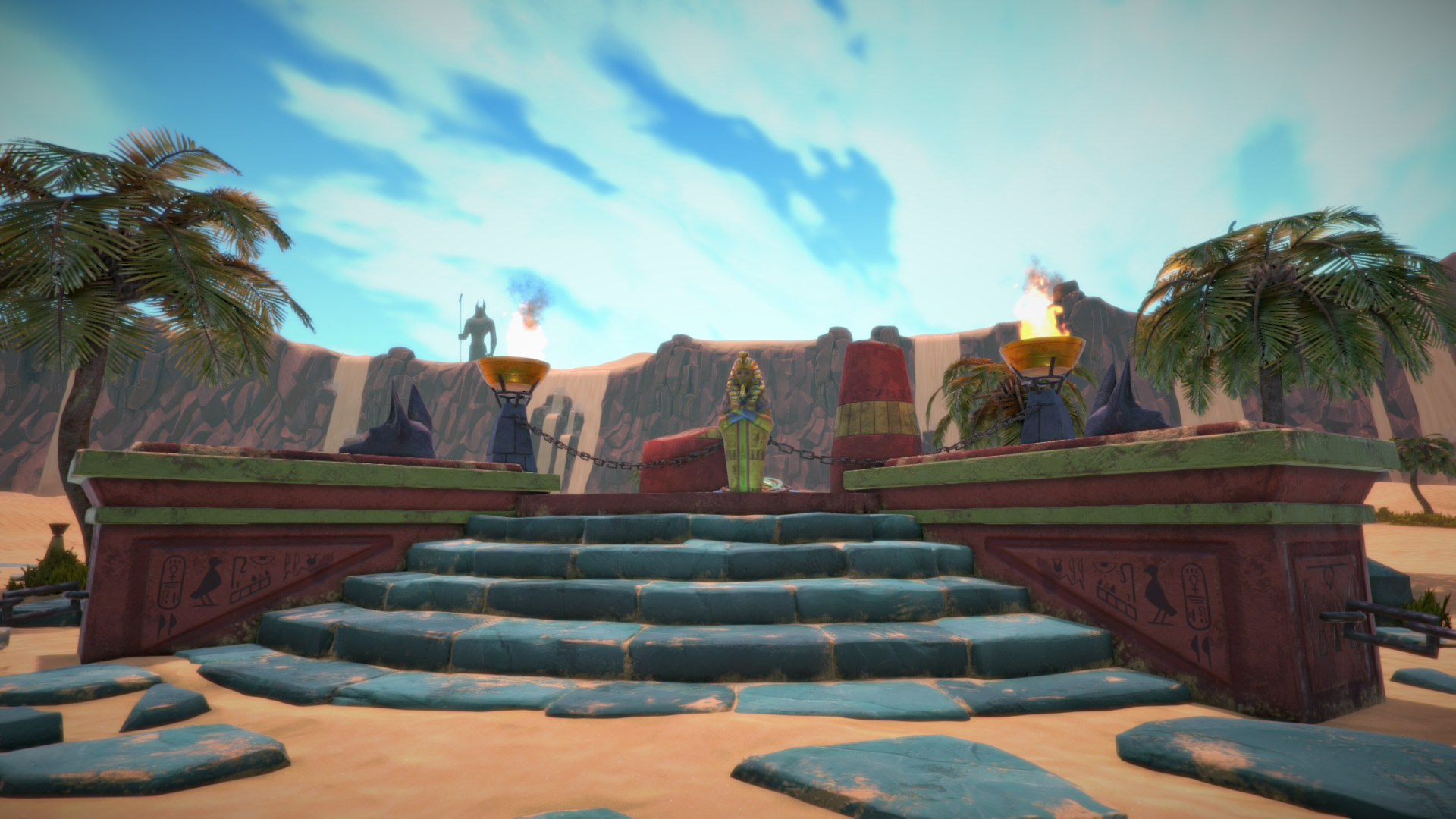 This is the big stuff now. The Three Great Pyramids are enormous, of course, and inside them lots of enemies crawl and live waiting for you to challenge them. First time you play Immortal Redneck, only one of them will be open. 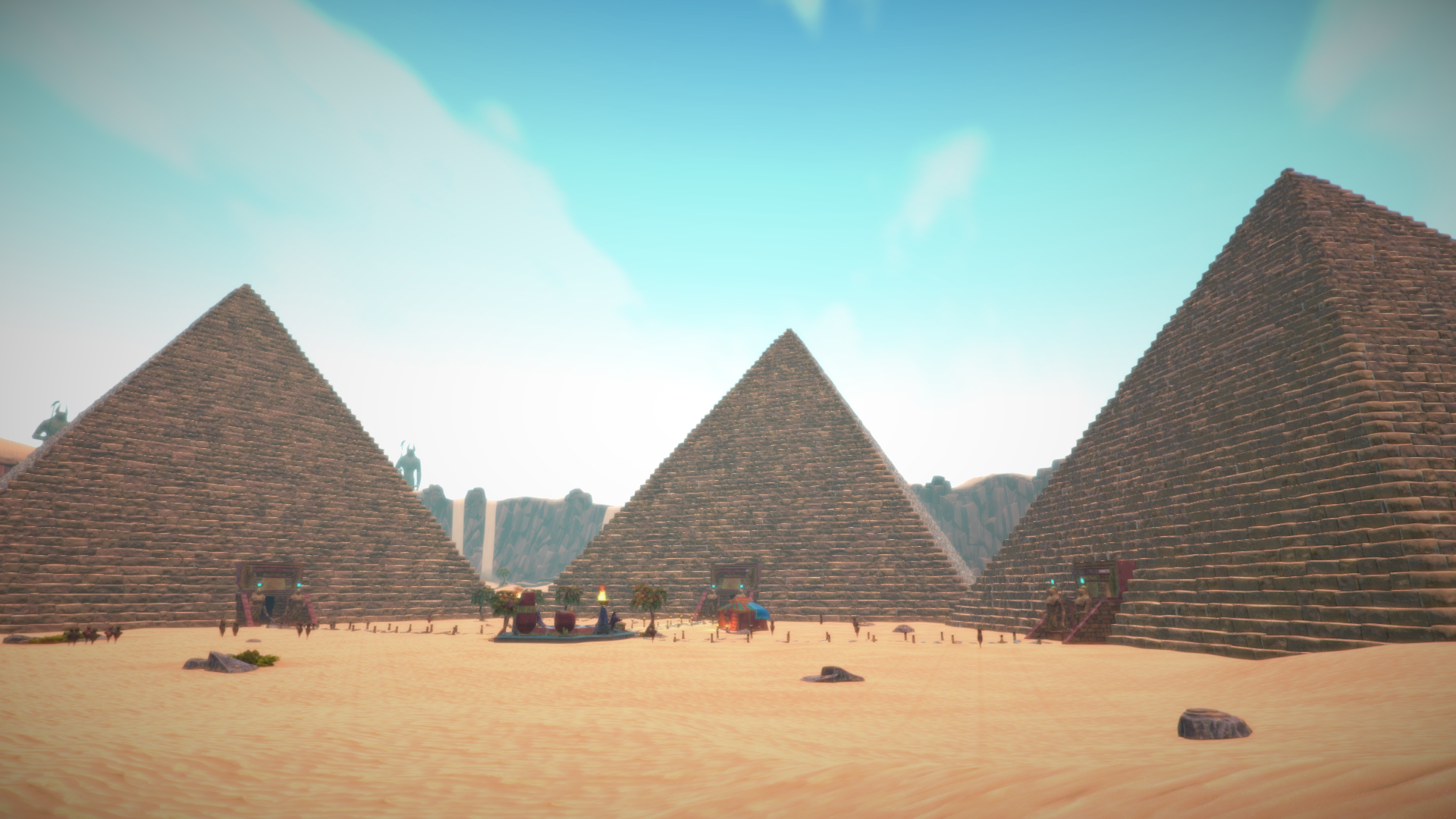 The way to get inside the other two? Easy: beat the first one, and the second one will open. And once you have conquered this one, the last one will receive you with open arms. This last thing is quite literal, look:

Inside the pyramids, no matter which one, you won’t feel the pass of time, but outside them? Admire how beautiful this scenery can be at different hours. The day cycle while take a whole hour, so this is a fast version.

There lot of little details we’ve put around the pyramids. This is the only place in the game that it’s not randomly arranged, so we tried to make it really special and unique. 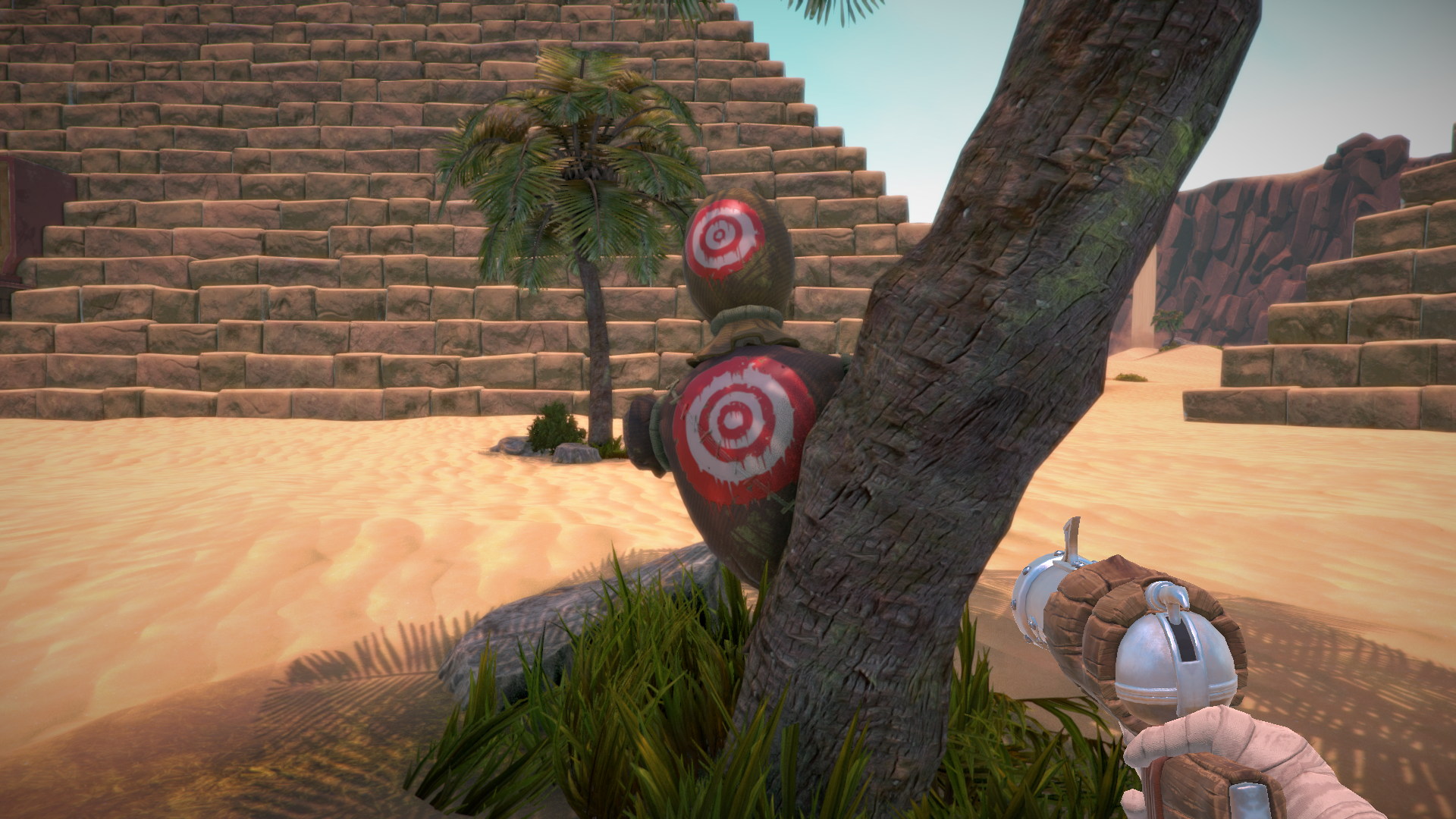 Who watches the Sacred Watchers? 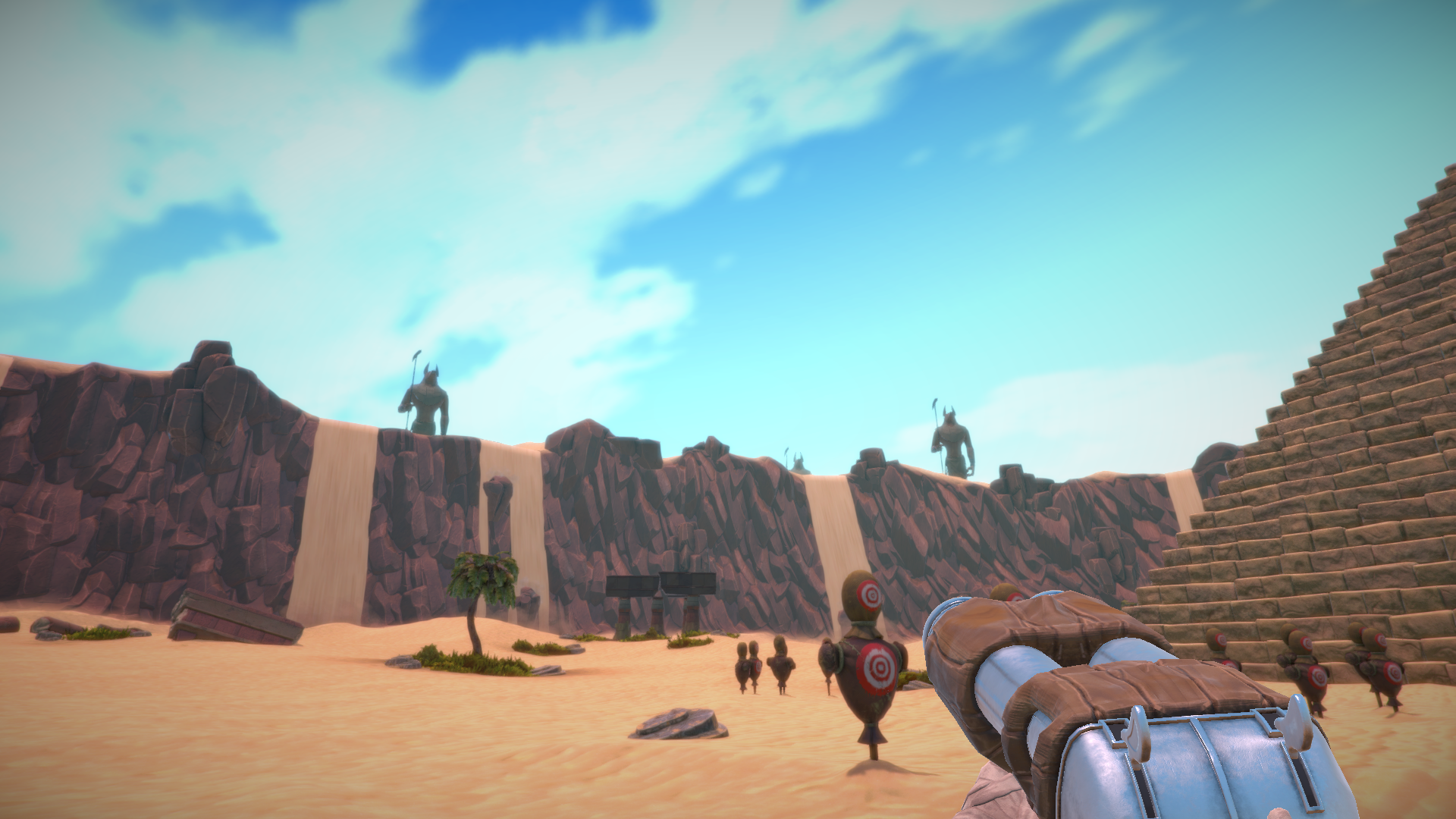 Oh, don’t get to much attached to this sand cascades: once the curse of the Immortal Redneck takes places, a unholy sandstorm will block all the way to them. You won’t be able to take this picture even if you really try it. A impossible photography at an impossible place. 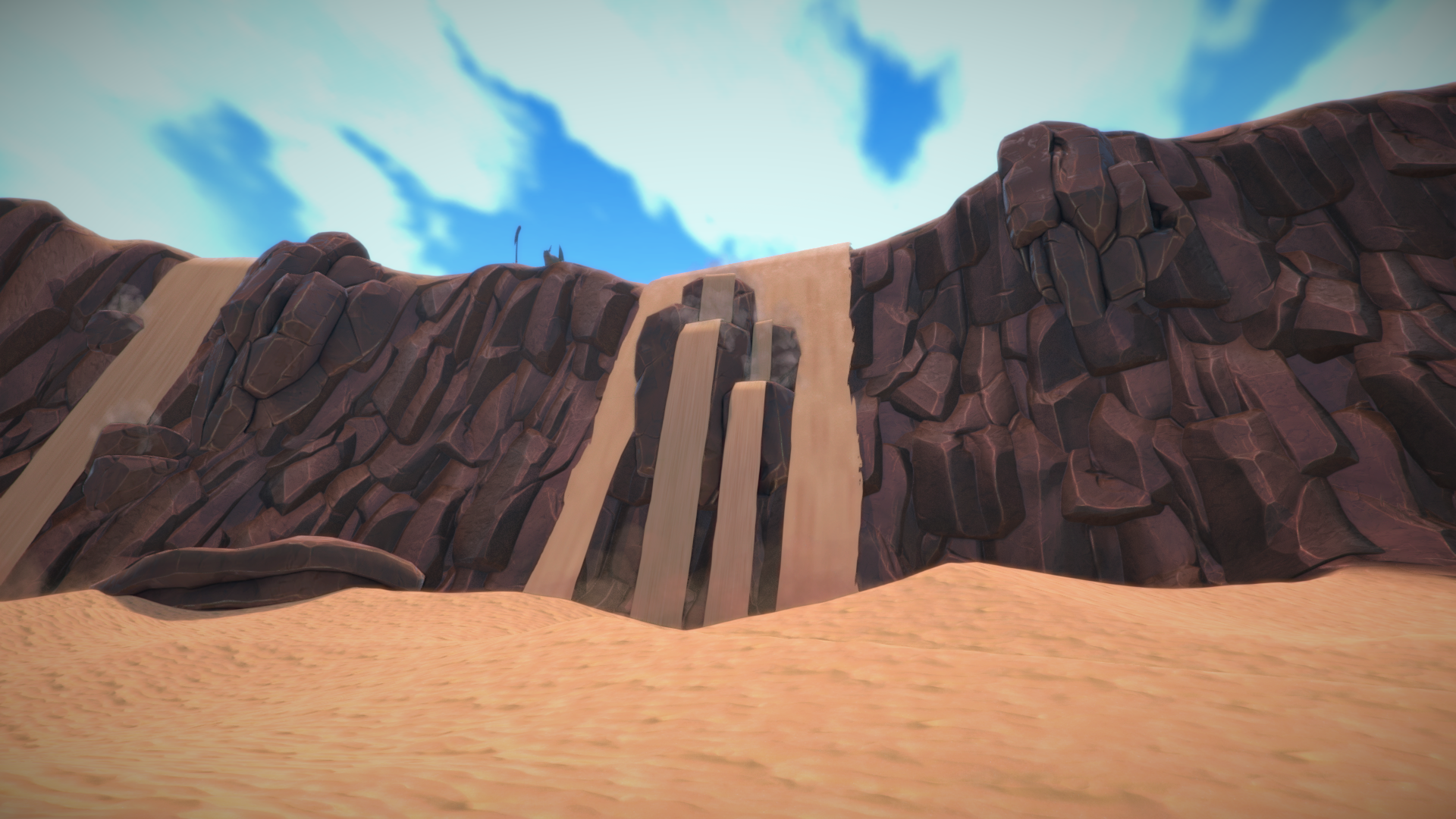 The powers behind this setup, behind the monsters inside the pyramids and the responsible of the curse/blessing of your immortality remain a secret, but take our word: you won’t be disappointed.

The Tree of Life and Skills

Look at that tiny, poor sprout. It’s hard to believe this little thing has so much power, but the Tree of Life and Skills, which we have always called the Literal Skill Tree – because that’s what it is – is really important. The redneck progress depends almost entirely of the good being of this acacia, so making it grow strong will make you stronger, too. 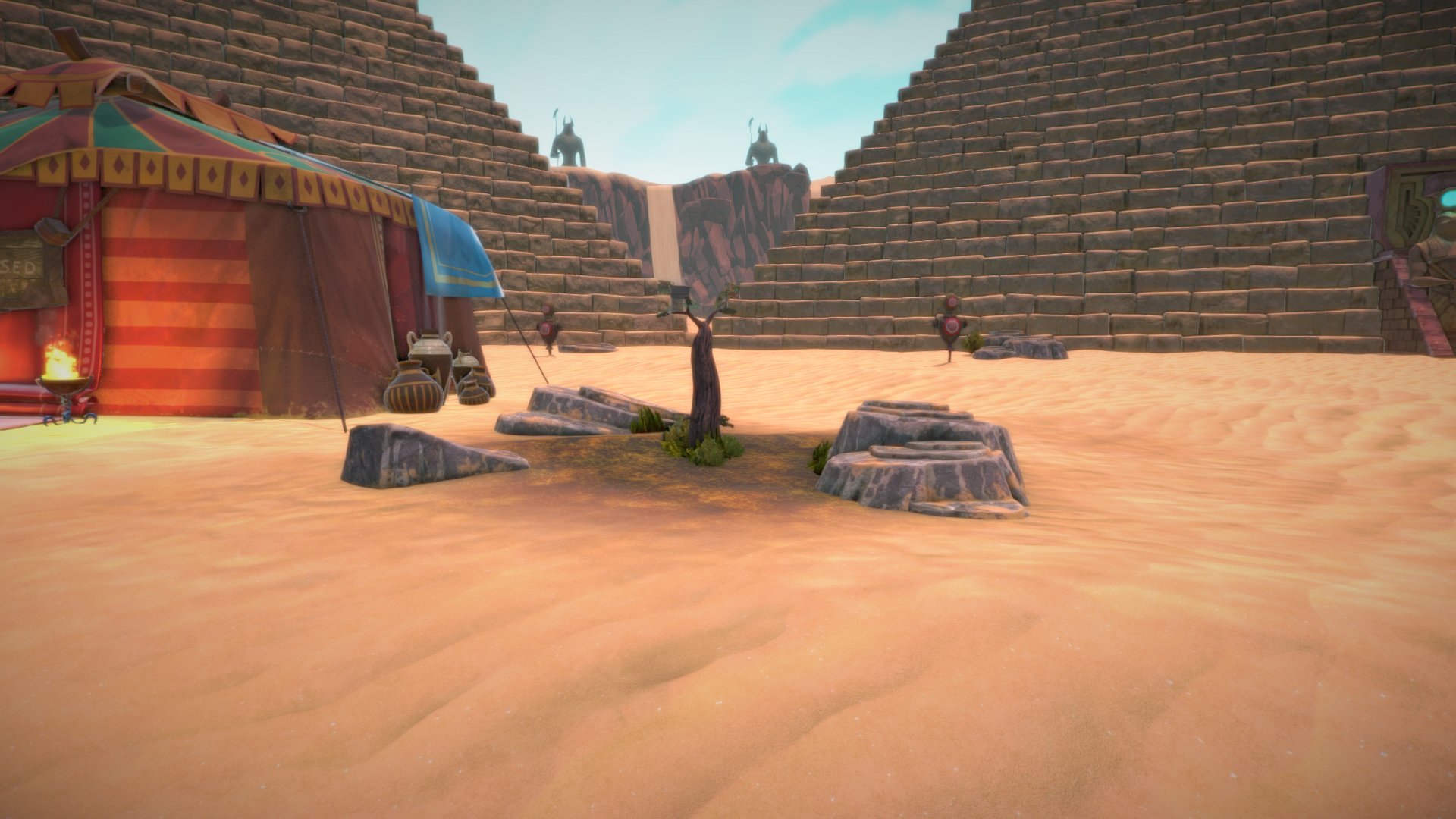 This is a mockup of how we want the skills and abilities and classes to develop. It’s a little rough at this moment and not finished stuff at all, but we wanted to show a little about it. You’ll need a lot of gold to complete this… 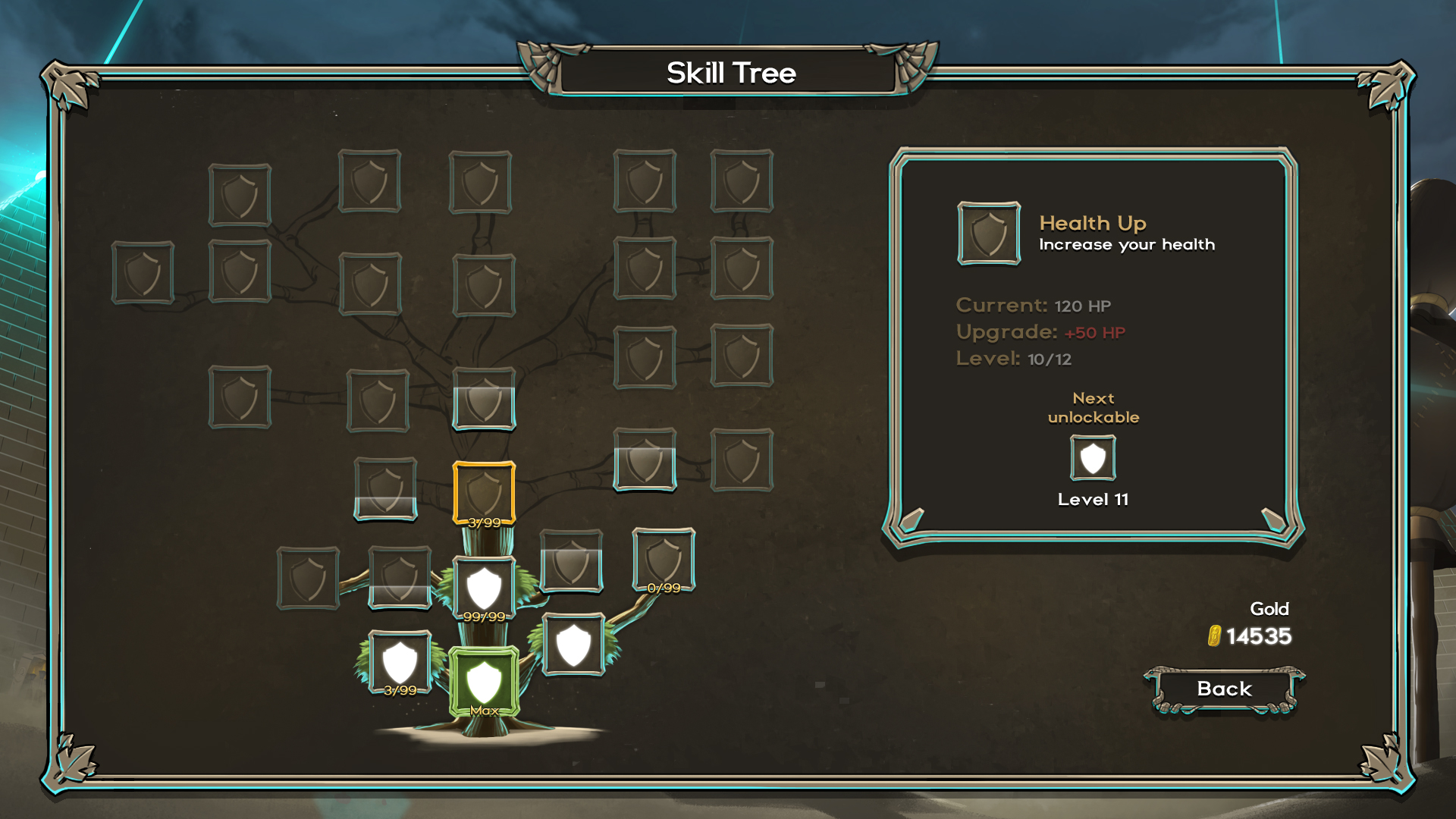 Also, look how beautiful this sacred acacia looks at three different times of the day. And yes, this is how big it can get once you have fully unlocked every little branch. It will take time and money. 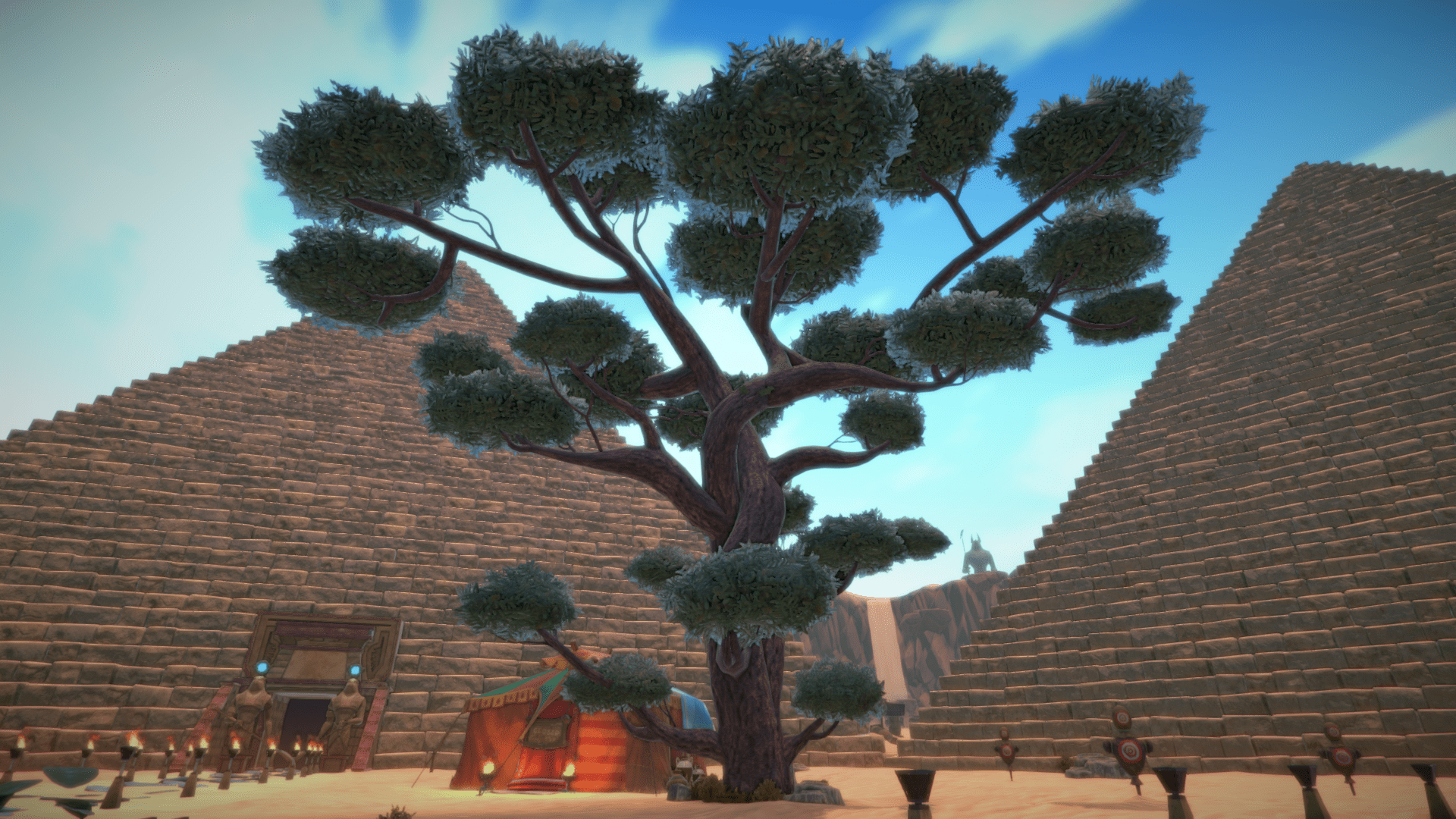 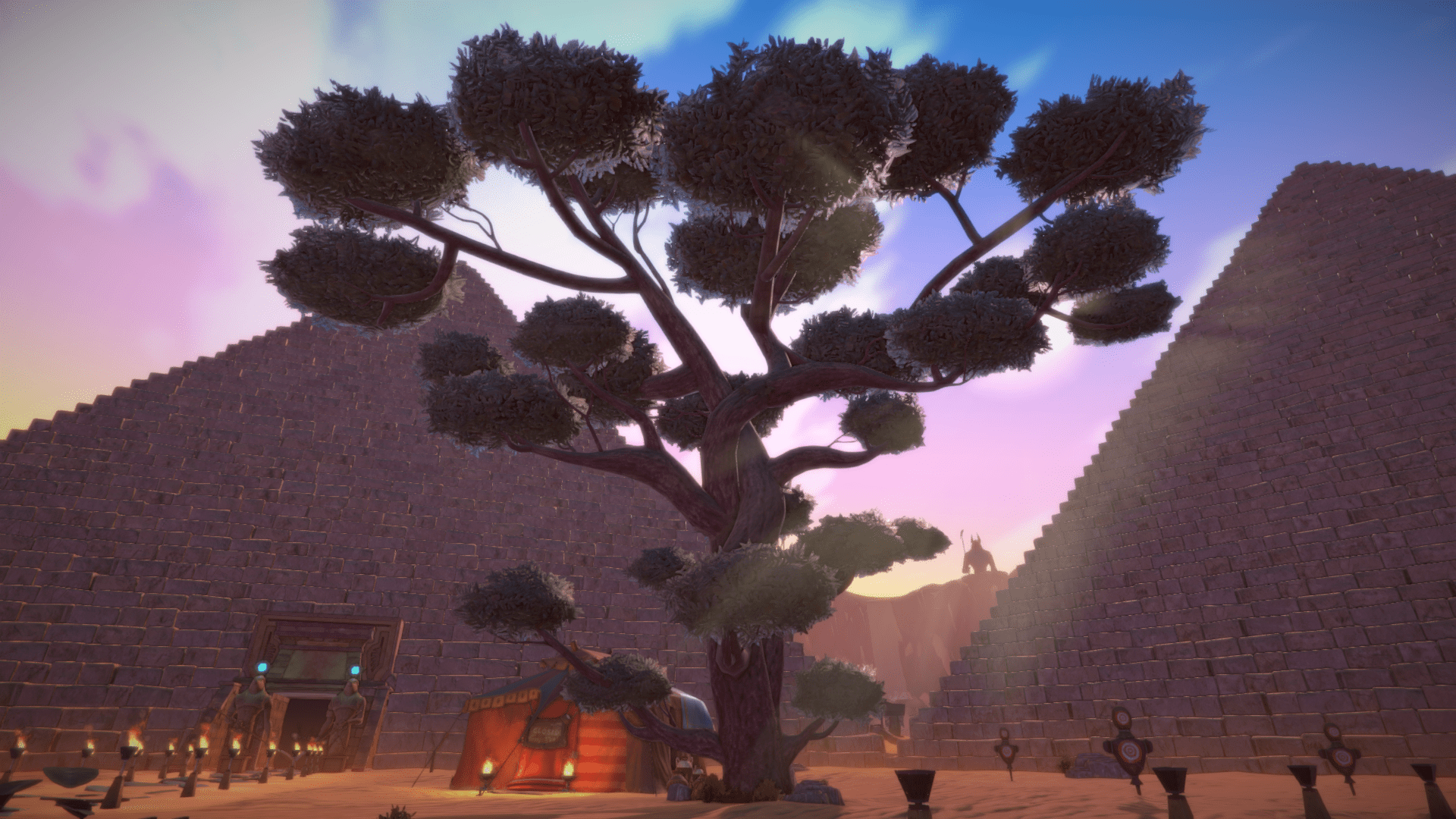 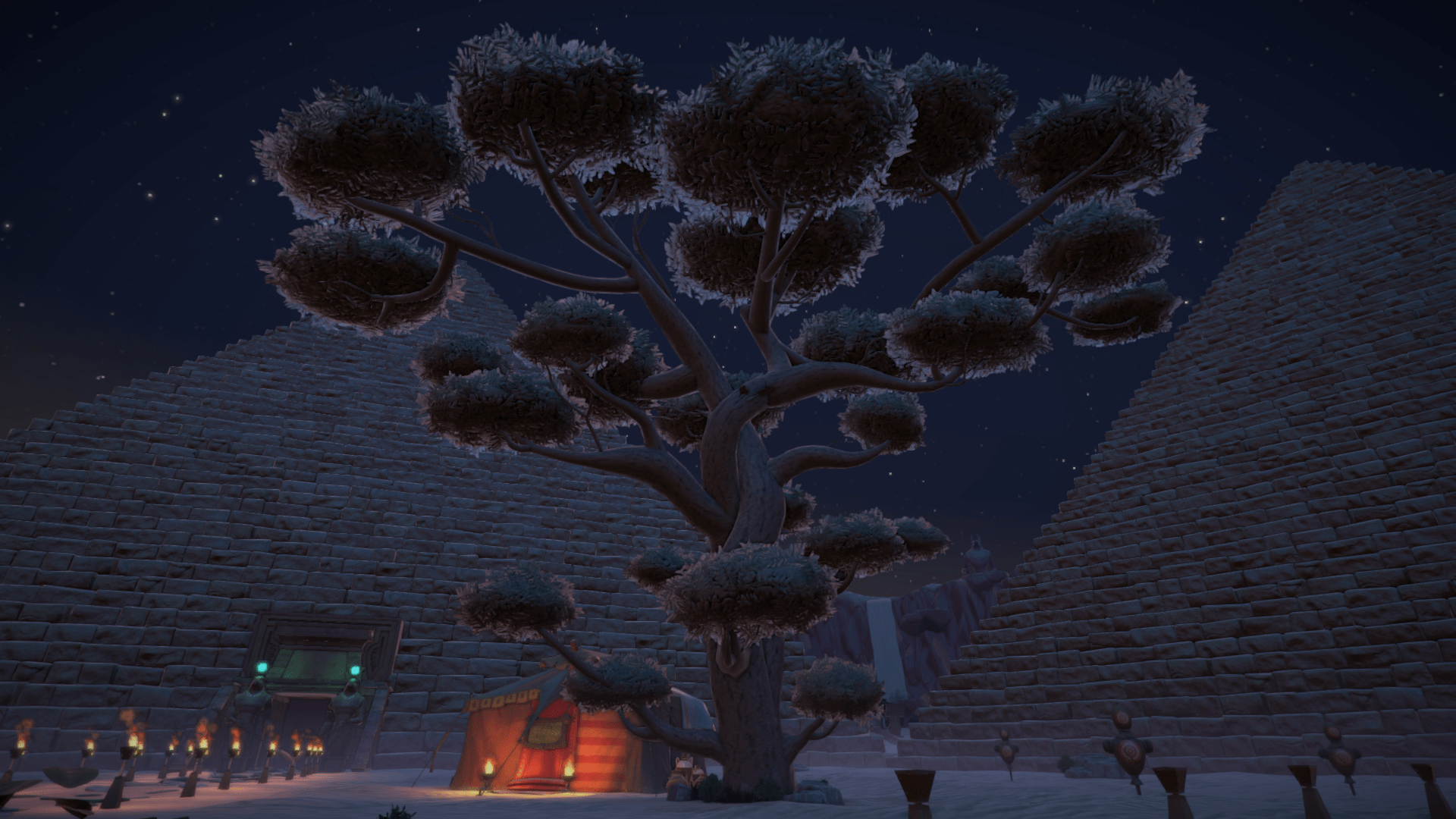 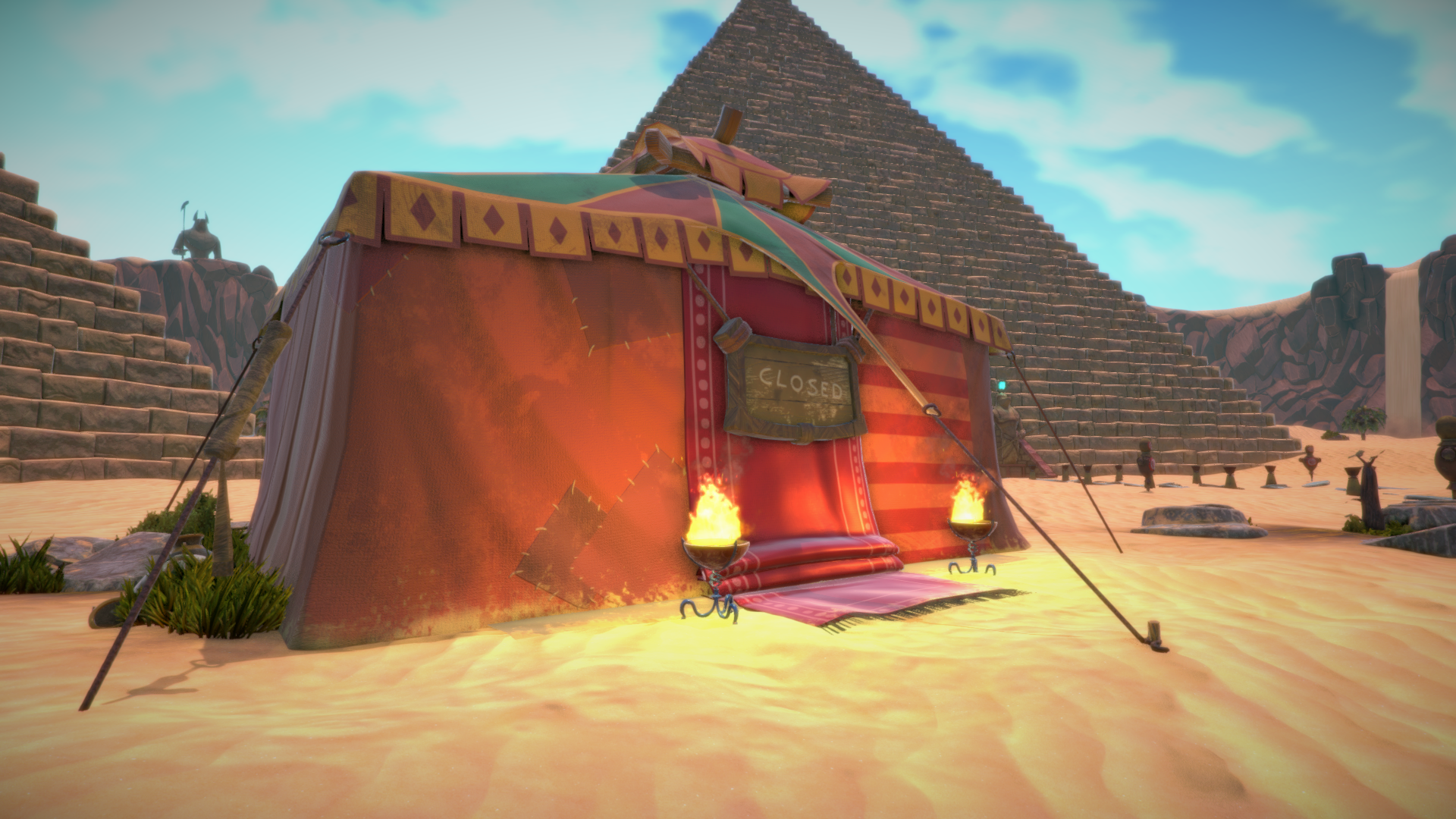 Oh, this guy is still missing… Welp, we can only insist in how necessary it will be for your progress. If you get stronger with the tree, your weapons and explosive and harmful stuff, in general, while need the professional skills of this mysterious Merchant.

Worry not, we have plenty of time to talk about him. Just wait a little more time, please.

More stuff to do

This is just a little sneak peek into the outdoors of Immortal Redneck. Oh, yes, we still have some stuff to implement – the Merchant, mainly, but also the final moon, the fire in the torches, some more colors in the sky when the day goes on…

We have taken our time with this. We hope that’s noticeable, because even if most of the game takes place inside the pyramids, where the rooms are randomly placed each time, we wanted it to make a good impression with the first sights of the game. Also, we thought you, the player, would like to have a quiet, peaceful place before getting into the mayhem inside the pyramids.

Our game is a hard, crazy, fast paced mystical trip, but its outdoors? It’s the kind of place where you’d go on vacation. That’s what the redneck did before everything went nuts, actually.

And that was all for now. Even if we had to write about the outdoors, what we really want and hope is for you to get what this part of the game is about in just a few seconds. Explaining everything even further is kind of pointless, but that night and day cycle is so beautiful we couldn’t resist talking about it…

the game looks awesome really liking the feeling of it,i just wanna if you need a composer. do you?

Already got one, sorry! We are working right now with some of the first tunes!