In this quick report: new and bigger units and changes in the UI.

Here's the latest progress I made in Beastmancer:

This is something that was hard to implement but critical to my vision. Basically I have a grid with pathfinding ready but that only could use small units (that is 1 unit = 1 tile), that was a problem because I wanted some monsters to be bigger (1 m tiles). At first I tried to simply fix it by adding aditional logic to the grid but after experimenting for a while my code turned into a mess so I decided to try other thing: use two grids. While I had to work hard to "sincronize" them at the end it gave me the results I wanted without messing too much of my code. You can see some bigger units in action in the next videos:

I still need to polish some details but movement and attacks now work as fine as they work for the smaller units. I also feel proud of myself (even if I sound arrogant) for being able to implement such a challenging feature in short time.

With the grid supporting bigger units I can now start adding more monsters, more powerful and detailed and with more complex animations. Here's two of them (I'll keep showing more creatures in the next reports):

I still don't have a name for this one but you can bet that he's gonna be a strong mage-type monster.

I also added new UI elements like a spellbook window and an inventory window. These elements are used during combat, the idea is that every turn the player (or the enemy beastmancer) can make a single action: throw a spell, use an item, summon a monster from his/her "reserve" or recall one that is fighting (monsters can die so is sometimes wise to make them retreat to not lose them, specially the rare ones). These spells can be learn during the exploration parts of the game while items can be crafted, found or received after a fight, not all of them can be used during combat though but for the items and spells that you can use in combat you will have to use these panels: 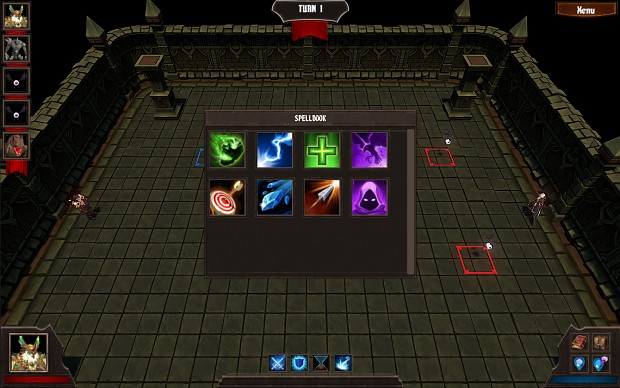 Plenty of spells, some are for attack, others are buffs, debuffs and healing. They depend on the blue mana bar in the bottom right corner of the screen. 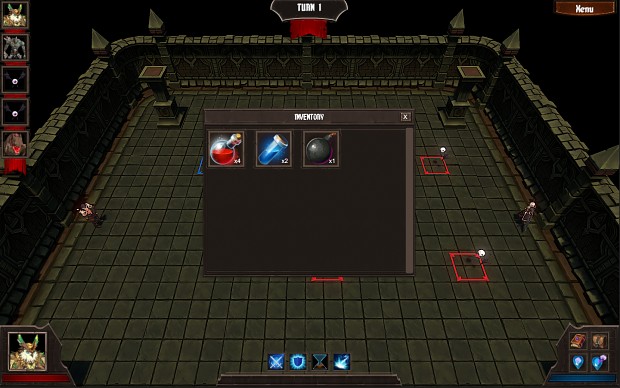 Some sample items: a big health potion to cure a monster, a small mana potion so the player can use spells and a bomb to damage one or more enemy monsters.

That's it for this quick report. I'm having good and steady progress with the game so I expect to keep making these short reports often. I'm nearing completion of the core features of the game but still there's a lot of content to add because in my opinion, gamers expect that an RPG has a good length and I hope to deliver in that front.