This fortnight's sprint was a mix of art, sound and AI polish. Plus a secret new weapon which is total overkill. Let's take a look at what we did!

Posted by BroadsideGames on Feb 2nd, 2020

This fortnight's sprint was a mix of art, sound and AI polish. Let's take a look at what we did! 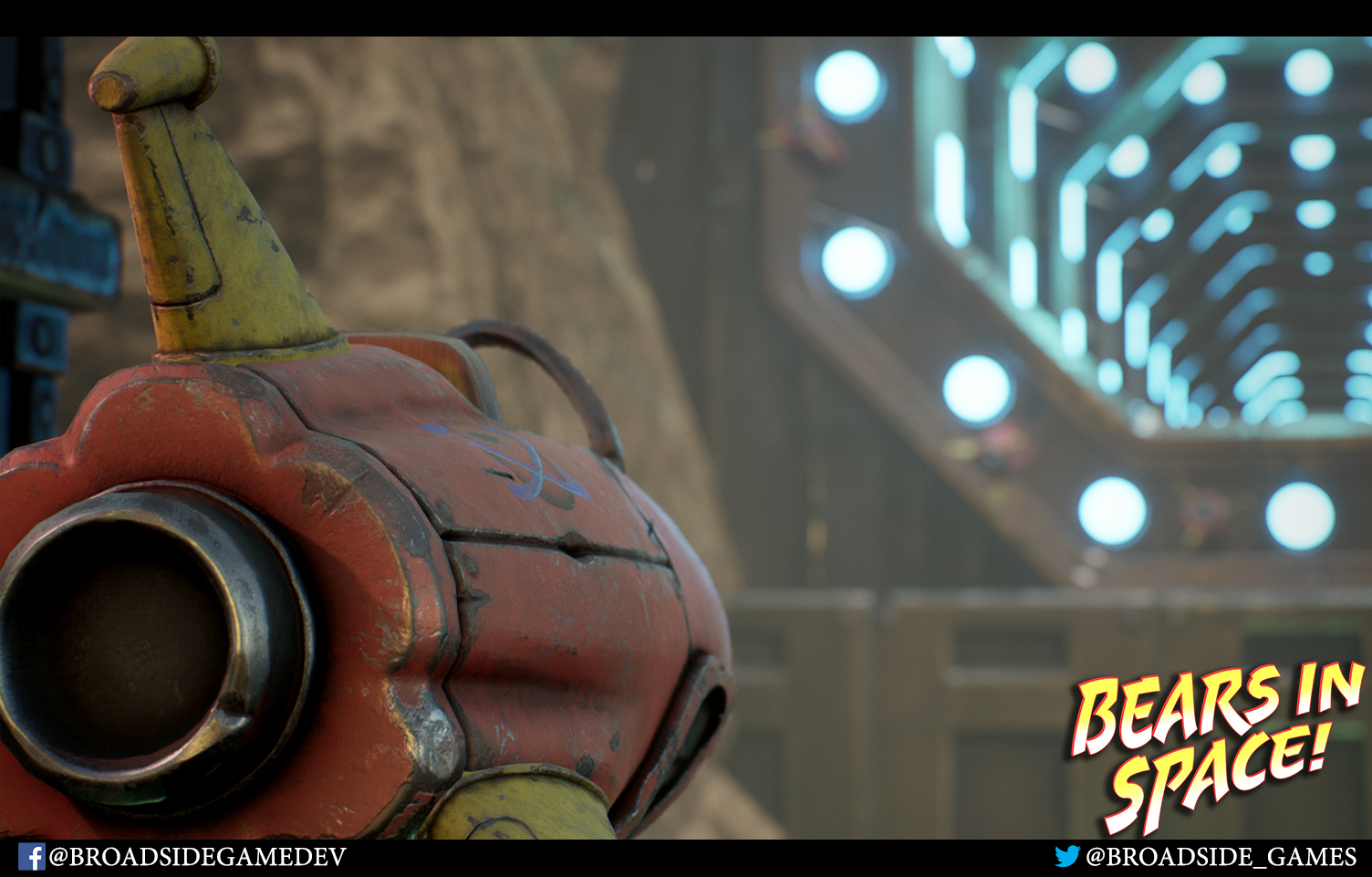 Building off the concepts in our last post, we began working on the environmental structures that will appear in the world, with a focus on maximizing variation 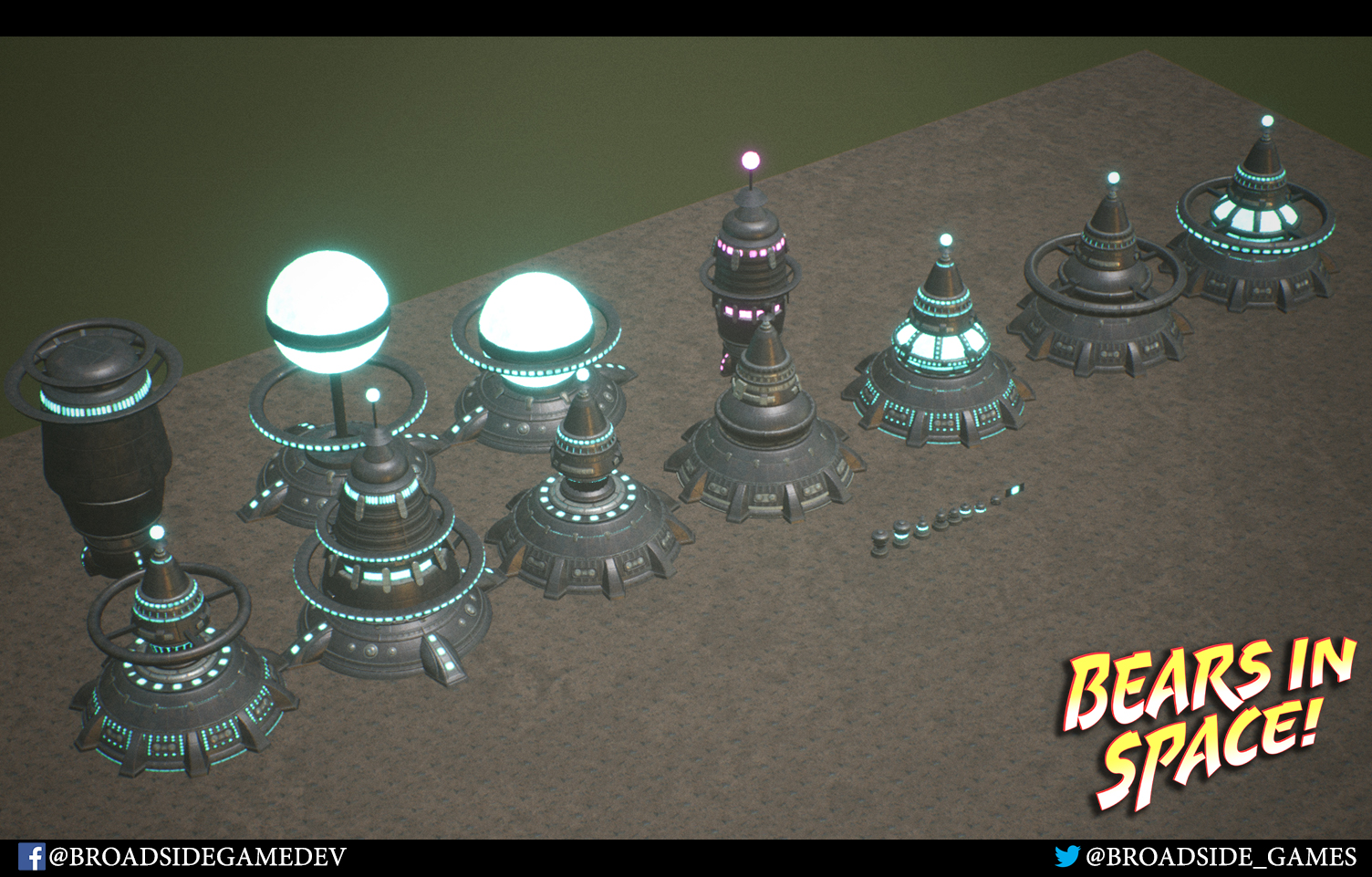 We also started building medium forms, unlike the larger forms, these smaller set pieces get a sculpted treatment. Although this takes more time, we still keep a focus on modularity, letting us maximise how we use each piece. 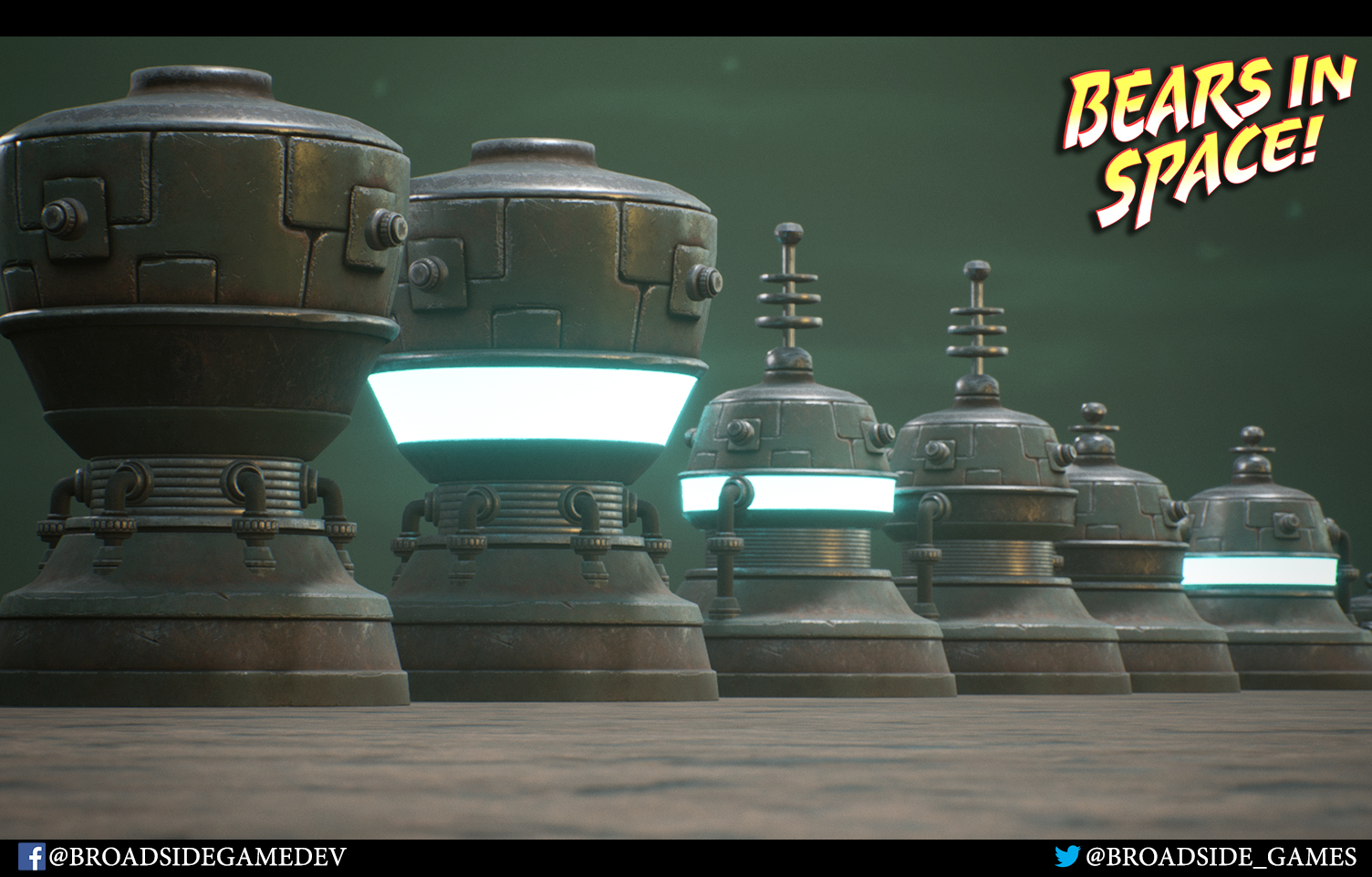 Work has begun on taking our next level from the greybox stage into a more polished one. Set dressing has begun now that we're happy with the layout 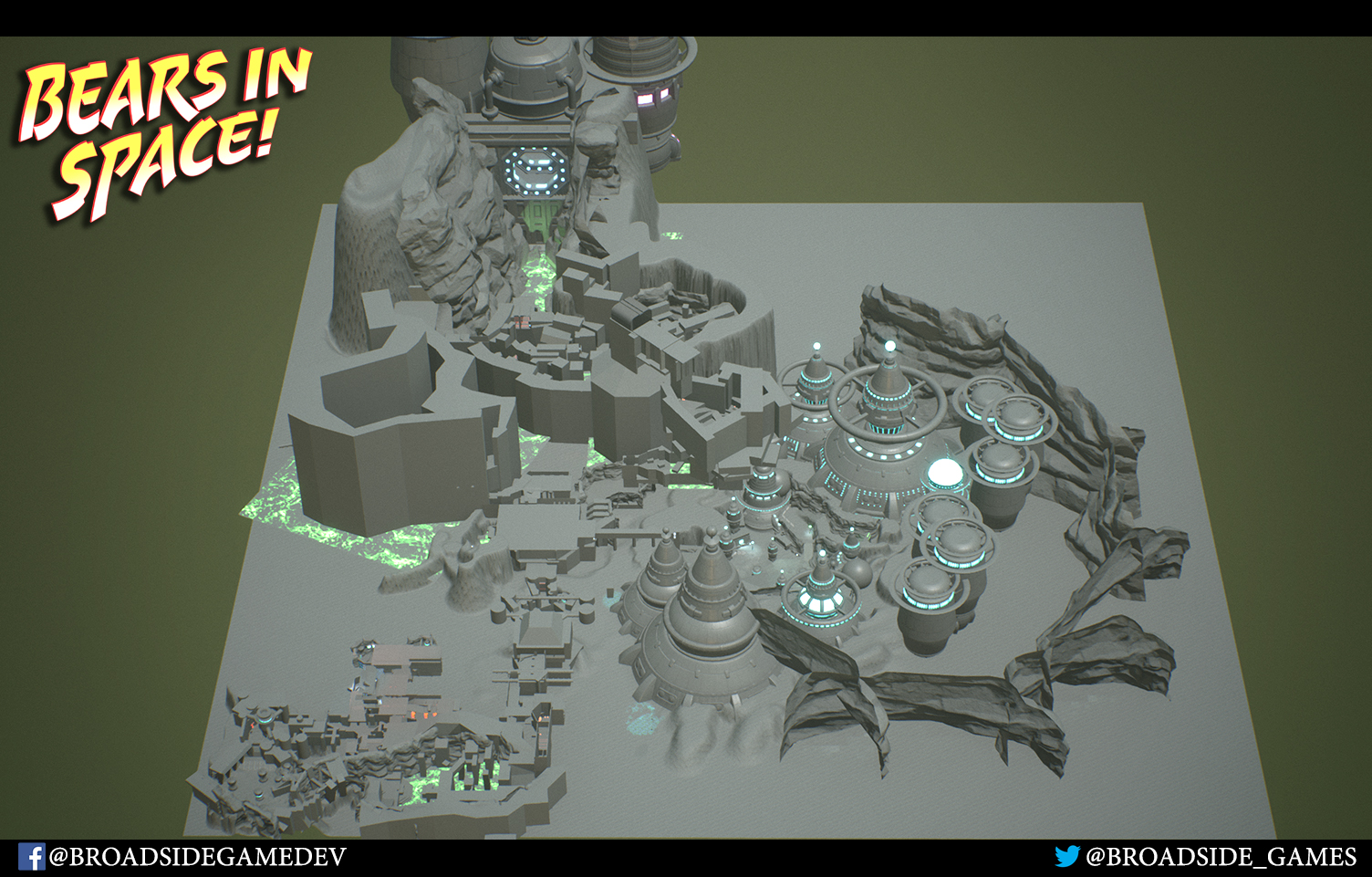 Our junior 3d artist has been hard at work designing and modelling some of the flora that will appear in Bears In Space. we're not quite ready to show that off just yet, but look out in the near future for a sneak peek of that.

Our signature "Armarang" weapon was in need of some suitably silly sound effects, and our sound designer nailed the implementation of them.
When entering a combat area, we now have the ability to trigger battle music to really amp up the tension of battle. There's still a little bit of work to do on this system, but it's coming together nicely and we will be showing it off next fortnight. 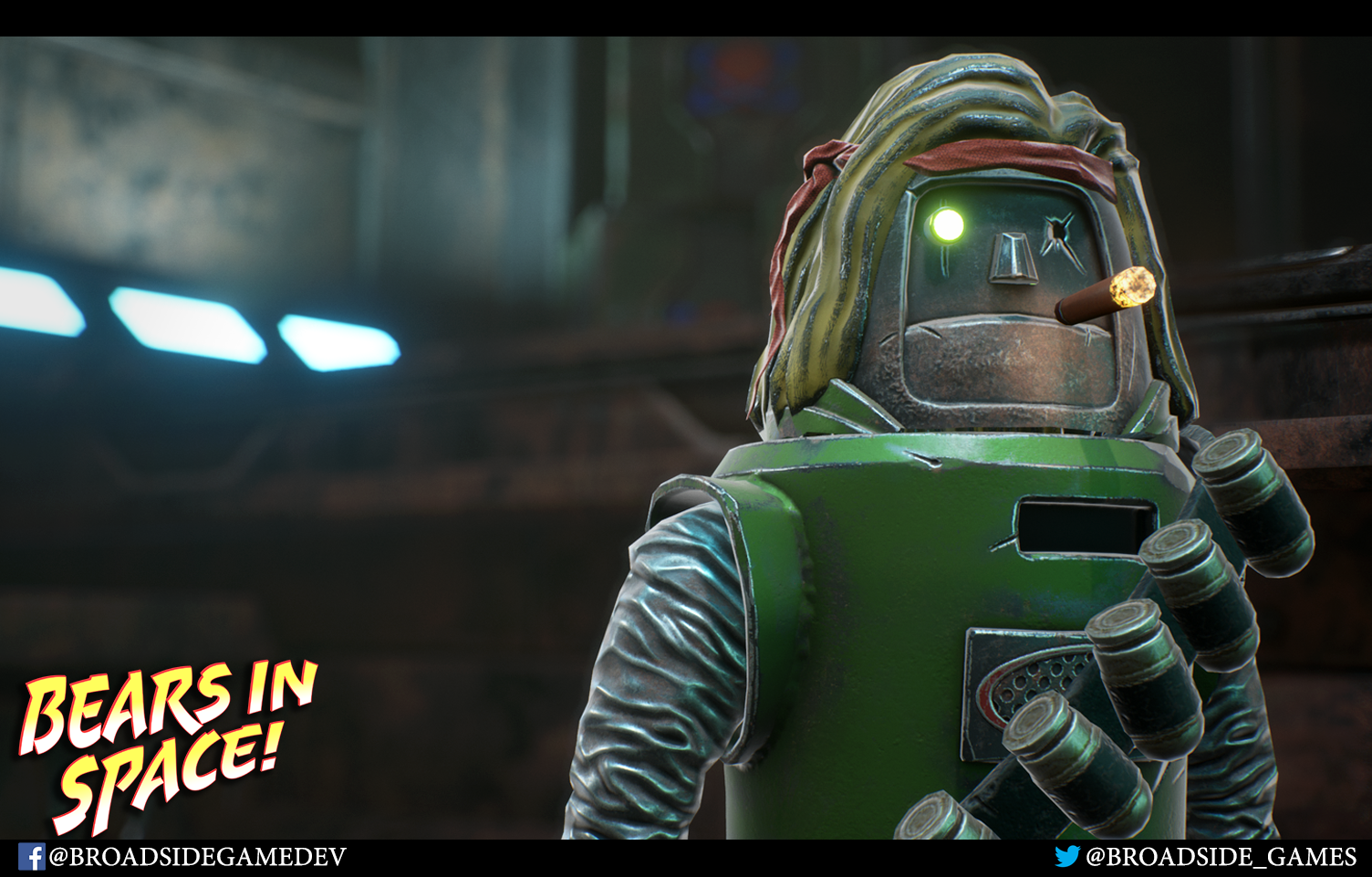 Our AI blueprints were in a bit of dismay and as such, required some fine tuning. We decided to take a simpler approach to our AI controllers, having a parent controller which houses the basic AI functions that all of our enemies will use, then creating child AI controllers with more specific functions relating to the individual enemy type.
This also means that when we make a change to something fundamental, like how our enemies perceive the player, changes will only need to be made on the parent AI controller, rather than each individual controllers.

Our last piece to show off is probably one of the dumbest weapons we have so far, a Deca-Rocket Launcher. There's no need to see what you're shooting at with this weapon, you can be assured that anything in front of you will be dead

That's about it for this fortnight, it was a tough slog but we fixed and added a lot of fundamental things which needed doing. Our next biggest milestone goal is to have a great looking demo with which we use to apply for grants and funding, such as the Epic Games Megagrant. We had hoped to have a Steam page set up this fortnight too, but it turns out it's more complex than we thought, you've gotta be smarter than the average bear!