We revealed a couple of these in the trailer but you'll only have been able to get a quick glance at them there. So here's the Pegasus and the Raptor cockpit in their full glory.

Now that the trailers are out it's time to go back to our weekly/fortnightly update schedule. If you only read the updates, yeah you heard correctly, trailers. We released a second one hours after the first. For those who haven't seen it, here it is.


Lots of stuff has been going on behind the scenes but the team figured that first you'd appreciate a chance to get a better look at the Battlestar Pegasus and Raptor cockpit as both flash by so quickly in the video. It should be pointed out that the Pegasus is still very much a work in progress and probably won't be ready for Shattered Armistice (our first release). 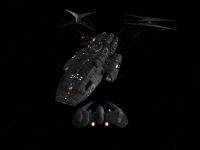 The Raptor cockpit is likely to get a few tweaks too but is definitely going to be included. 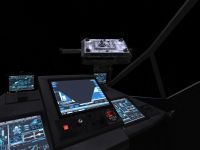 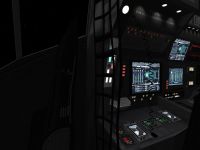 In addition to the Raptor cockpit we've got a nice work in progress shot of the Viper II cockpit. This along with the one for the MK VII is what you'll be seeing most of the time (The MK VIIe will share the same cockpit with only minimal differences). 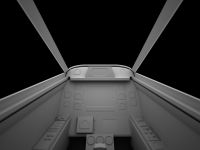 So far the series has been kind to us and not thrown in anything new we have to model immediately. If the show keeps being kind to us for the last few episodes we hope to keep making progress at the same rate or faster than we have been so far.
Comments

Magnificent! This game is looking spectacular!

that looks pretty much near amazing! can you actually get hit by those flak-explosions or are they just eyecandy? 'Cause if you can get hit you don't have many chances to evade them, it seems.
But nice, nice work. So refreshing to actually see a BSG mod update and look like it's going to happen.

Yes, you can get hit by the flak explosions. Each of those does damage over a small area of effect, so a direct hit isn't even required.

As such, going through them isn't really going to be a good option, not for smaller ships anyway. While a Heavy Raider might be able to simply accept the hits and pass through a flak screen due to its heavy armour, a normal Raider or any of the Vipers would require more luck than skill to avoid getting shredded.

So basically, Apollo had it right in the mini-series: For frak's sake stay out of the Battlestar's firing solution :D

The thing about flak, though, is that it doesn't have complete coverage. In the Pegasus image in this update, for example, you'd probably be exposed to almost no flak fire if you approached from above and in front due to the layout of the turrets (Pegasus lacks the all-round turret placement of Galactica), so rather than making an attack impossible, flak simply forces you to think about how you carry it out.

I just watched Episode 12, Season 4 and man they are struggling to bring some sense to the series. I used to love BSG during Season 1, was still impressed by Season 2 and then watched the show go down the drain completely. Too many boring questions raised, which never get an answer, too much talk on the shallow side and not enough action. I think the whole Cylons-as-our-allies thing turned the script over and made the series lose it's purpose. It's all a wicked, mythological, technological endeavor and the show's writers are probably going to come up with a most ridiculous solution to the story.
This mod reminds me of BSG's better times, when it still had a working story and a lot of glorious moments, either in space or during sparring on the Galactica. It's just like with Prison Break - you start to love the shows, then they get ruined season by season and you just hope they can somehow reach the end and bring back some depth in the final few episodes.

Coming along nicely... great look at the cockpits and is looking polished...

Beautiful... but i think (in game jump flashes only white) need more Orange and Blue fotons like in original series... Fistly Orange lightning and iceBlue with dissapearing ship and orange-to white circle and final white shining fotons... ''s04 e12 tilyum ship jumping under raptor...'' :) it's wonderful i think :).. what do you think?