Lots of new exciting development info to get through this week, lets get straight to it!

Marcin - Designer This week I spent the majority of my time doing two things. The first was the setup of the Primitives and other building blocks for the new version of Construction mechanics we are currently working on. The other is the Juggernaut creature, for which I have been implementing new combat mechanics.

The whole idea for the Juggernaut came from the fantasy of challenging and cooperative combat against an enemy that is by nature more powerful than the average Pioneer. I believe a ‘mini-boss’ would be a fairly accurate label. While the small enemies such as Splintermites should be able to overwhelm you with sheer numbers, the Juggernaut’s forte lies in its brute force. This means that managing this threat should require an entirely new set of tactics.

For the experience of combat with the Juggernaut, we took inspiration from multi-phase boss battles such as those in ‘Zelda’ and ‘Shadow of the Colossus’. Of course we are not looking for the same scale of the encounter, but more for that moment of realisation that this is the foe you need to step back from for second to consider how to defeat it, because swinging your sword wildly or your regular shower of bullets just simply won’t do.

The MATA Tool plays a huge role in Eden Star and so we had to consider how such a large creature would react to being assaulted with kinetic powers. This involves a lot of new, and plenty of revamped old mechanics that Tristan, Lee, Lauren and I have been working with recently in order put together the Juggernaut’s unique way of being harnessed and smashed; it is simply too large to be pushed around, but it can have its legs pulled from underneath it and collapse to expose its weak spots.

There is of course more to the Juggernaut than just getting tactically beaten up. It has a range of powerful attacks of its own that will prove devastating if the Juggernaut is left to execute them. It can stomp, breath fire, and charge across long distances into you, your friends, and your outpost. 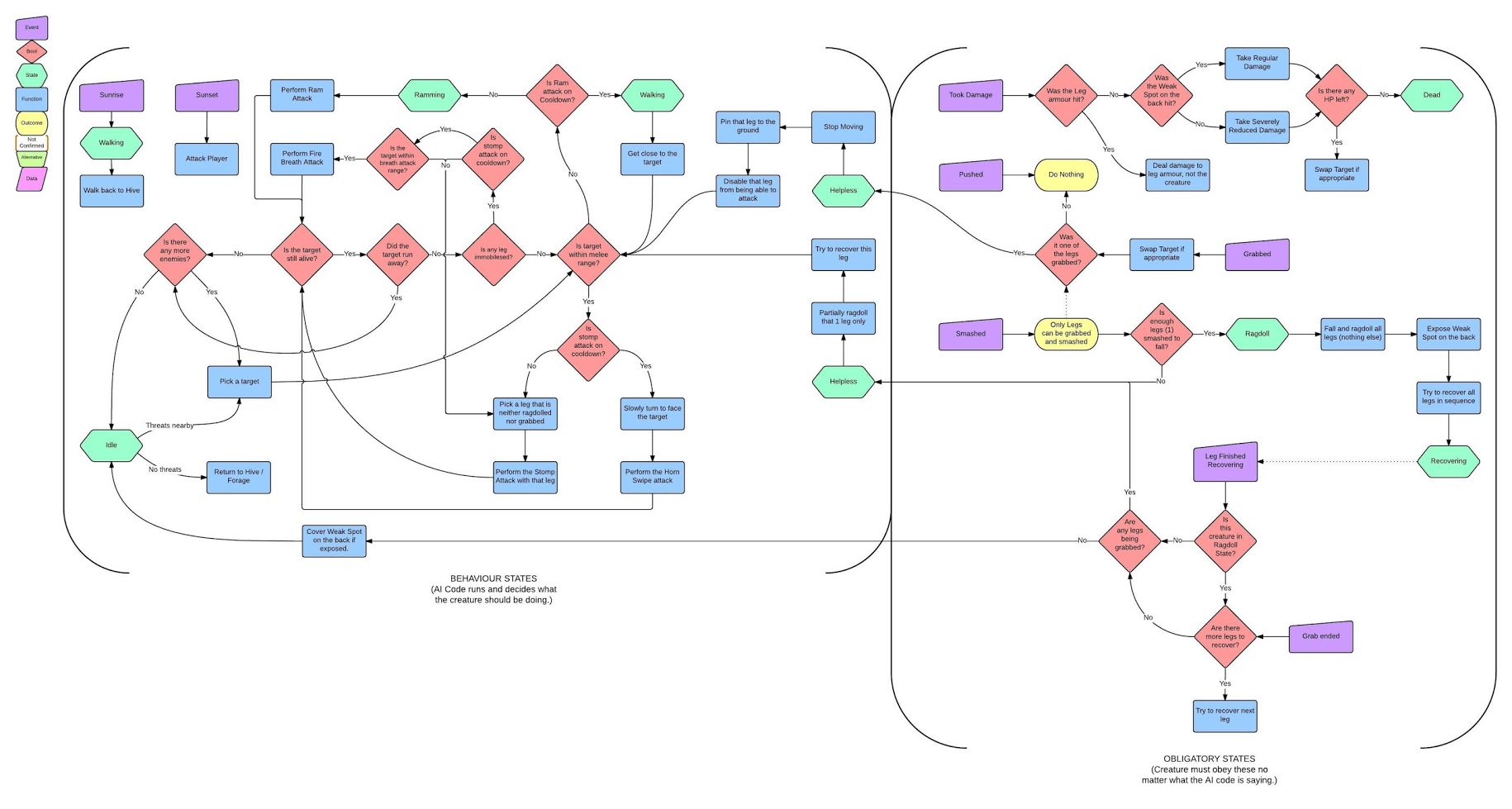 Here’s one of the early designs for what the full scope of the Juggernauts interaction could involve. Please keep in mind that it is a work in progress, but when finished, we hope to have a truly formidable opponent for you to fear. Thanks. The rest of the team have also been continuing work on future features….

This week I have been reviewing and amending the upgrades and system designs, the image below is a little cryptic without the full descriptions of the proposed upgrade modules, but an accurate direction for where I think we want to take it. The general gist surrounds the ability to combo moves and attacks together with the MATA Tool, which would be what the orange bar on the right hand side of your radial HUD is for.

Once full, certain devastating AOE abilities and kill moves can be executed all dependant on what combination of modules and nodes are equipped. As ever, this is a work in progress, but feel free to ask any questions in the comments below! 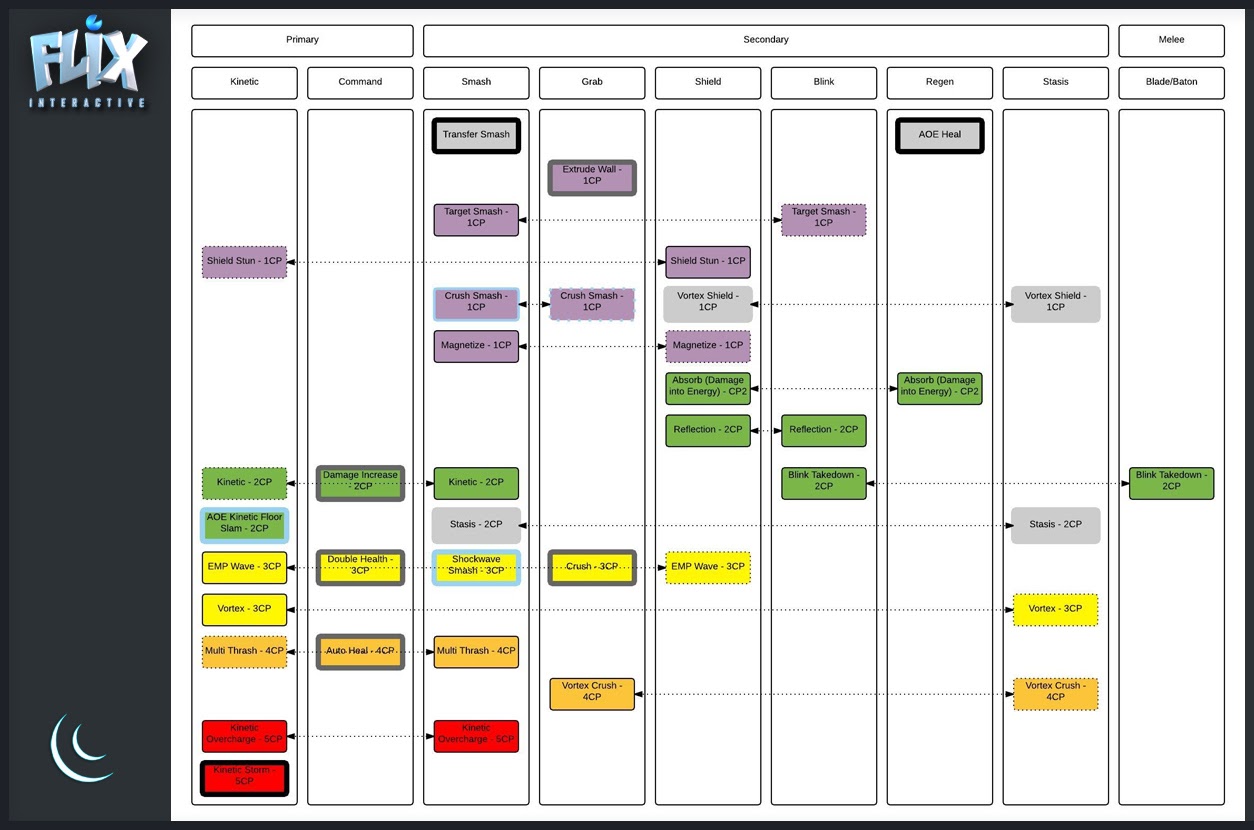 I’ve been finishing up with putting the AI together for the Juggernaut so the art team can start to add the pfx and audio. I’ve also been moving some functionality from blueprints into code to try and help with performance. The new perception component is still work in progress, but this should also help a lot with performance once finished.

Joe - Environment Artist I’ve been working on revamping all our Landscape and Rock shaders, as well as adding a bunch of new textures and models. I’ve also started placement work on our brand new super-huge map!

This week has been spent working through the bug and issues people from the community have been having, meetings regarding Onyx rock placement in the new level and weeping silently at the concept of this being the last week with my beloved Kyle :’(

Swamp Walker is now all finished! Here is a closeup of this guy! 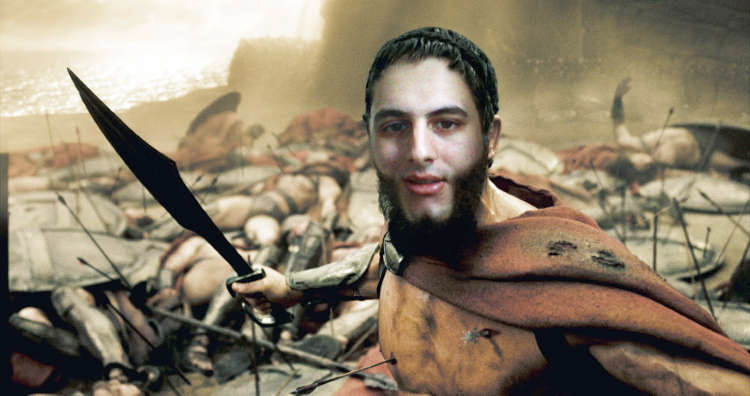 This week I’m in Cyprus, commanding the 300, my glorious Spartans! With our beards and lack of man jewelry we strike fear into the heart of the Persian armies, victory will be ours.. for Sparta! - Kefalonidas

A lot of build refactoring has been done this week, nothing fancy to show just yet as we nail down the updated destruction visuals. I’m hoping to put a timelapse video together soon to demonstrate the improved visuals and variety that can now be achieved. I’ve also been working on a rebrand of the studio logo, updated shaders and material setups for the new enemies, and level art direction for the 8 km world.

This week I have been continuing work on the Swamp Walker animations, working on its movement and attack. This will be a slow moving neutral creature, best observed from a distance. You might be tempted to get a closer look but you might lose an eye…

Visiting the ancient home of the Vikings.

I AM POWER. I AM BUILDING. I AM… sad. Good bye Kyle. May our paths cross again one day. Possibly even Monday. Something about Sunday? On a more relevant note building and power are both working together wondrously which is what I have been doing over the past week. Hope you all enjoy it when we release it.

Has been on a well deserved break. (Most likely, he probably hasn’t worked as hard as he should of, and instead has watched too much Anime, but otherwise it’s well deserved)

This week I’ve undergone a week’s silence in honor of the eventual loss of our epic producer. We will miss you so much… *silence* KYLE! I remembered his name, all on my own. HA! Seriously though, we’ll miss you Kyle. In spite of a week’s silence I’ve been working on the side on some environment concepts with Joe and Chris for new world :)

This week I’ve been working on fixing some of the FOV implementation as well as the HUD elements and their visibility. To be more precise I’ve been implementing their fading and reveal when not in use, which clears up the screen a lot when travelling and when in combat as well as our new build menu, working the functionality of fading into it so only the necessary elements remain on the screen when needed.

Such flowcharts! Such tongue!