Creating realistic planet textures for Interplanetary. Now no one will know those are not real planets! No one! 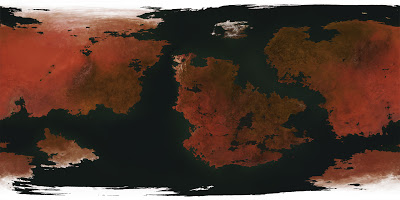 Hello folks, Jukka here again. I'll share a bit of the process that goes into a creating planet texture for Interplanetary.

From chaos to order... Sort of


Usually, when I've made planet textures or painted planets, I've started with either using Photoshop's cloud filters and level adjustments or custom brushes to create the terrain shapes... And if you simply want to make a planet, this works fine, but for Interplanetary, going with just random shapes isn't that simple, since the texture is a factor in the game balance. For example, small continents will restrict player's choice on where he can build and also can make it harder for the other player to hit buildings, although a successful hit on densely built area would have the potential for greater damage.

The way we're trying to ensure that the maps wont be a totally unknown factor in the game balance, is by using a specific ratio for land and ocean. So far, we don't have much data from testing on the subject so we simply decided to start out with 50/50 ratio and see how it works, but with this, the players would at least have the same potential area to build on. 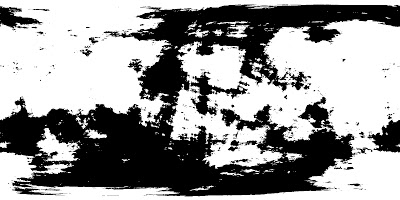 White is land... Or was it the other way around...

Because the land-ocean ratio has be to taken into account, using random shapes to create the continents would become much more time consuming. So, we employed the use of this handy planet generator, which allows you to specify how much water you want. I care mostly about the division of the land masses so I only pull out the black&white landmask from the generator, which I take to Photoshop for refining.

The shapes produced by the generator are very ragged and "broken", so I shift parts of the continents and islands around and get rid of the excess of small islands and lakes.


Once I have landmasses ready, I block in some background information, like tectonic plates and ocean currents. I'm not an expert on geography, so I just wing it. Even if it wouldn't be entirely accurate rendering it lends some logic into how the map turns out. And, of course, since we're not talking about Earth, there would be many, many things to take into consideration, if we wanted to get close to actual realism. 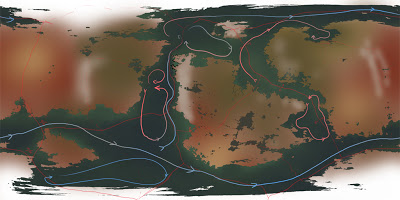 Lots of iron in the soil, or maybe it's dyed red from the blood of vanquished foes.

The next step is to throw in some colors and plan what kind of environment goes where. And from this point on, it's about painting in the terrain and details. For this I have some brushes I made from NASA's satellite photos, which I use to lay in texture. I go over each area several times with different brushes and slightly different colors to make the terrain look more detailed and natural. I also go in with a small basic brush to clean up and add precise detail to certain areas like mountains and river deltas.

If only planets were cubes

Due to the way the planet model is unwrapped, the poles need some more attention to minimize the amount of ugly distortion (there are a few methods for unwrapping a sphere to avoid the pole distortion, but I won't go into more details now as there'd probably be enough there for a whole new post and it is also still something I'm hoping to improve myself in). I use Photoshop's Polar coordinates -filter to wrap the texture into a circle, so that I can see how the pole looks and then paint the details I want near the poles and use the Polar coordinates again (this time with the 'polar to rectangular' setting) to bring it back to rectangle shape. 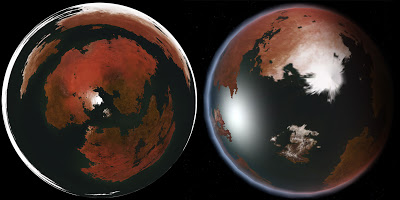 Left: After using polar coordinates Right: How it looks in unity in my test scene.

That's it for now, but feel free to ask questions, and I'll answer the best I can, and see you again in the future.