This week I have written about how I use IK to avoid labour-intensive animation work.

No point and click adventure game would be complete without the ability to pick up seemingly useless junk for use in some elaborate puzzle. The old game selected from a couple of animations, then just played them near the object. The end result meant the player had to use their imagination a little bit.

Not the most convincing animation…

For this 3D remake, we had 3 options:

Since time is a precious commodity when creating an indie game, we decided to go for a hybrid between 1 and 3, catch-all animations and code driven fine tuning of the player’s skeleton.

I’ll start by explaining the IK part of this system. In layman’s terms, IK (Inverse Kinematics) is figuring out how to place joints in a system (in this case the player’s skeleton) given a desired end position. I find it to be a difficult thing to explain with words, so allow me to demonstrate with some crudely drawn diagrams I made. 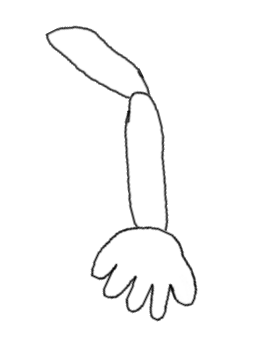 It’s supposed to be an arm. This is why I’m not an artist

This is a simplified version of the player skeleton in our game. Of course out player has a body and even various joints for his fingers, but for demonstrations sake, we’ll be using just these parts.

Let’s say the player came across a tasty-looking can of peas that we would very much like to pick up. 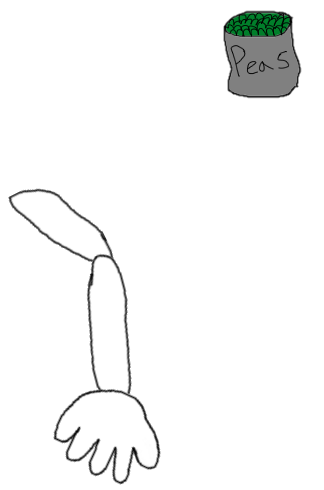 An excellent drawing of a can of peas

In order to pick up these delicious peas, we know where our hand needs to end up; grasping the can. 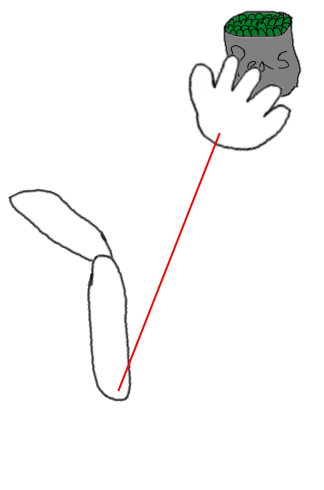 Our hand needs to end up on the peas

If we move our hand to where it needs to go, the arm needs to follow (unless your name is Rayman). This is where the power of IK comes in. Since the hand has moved, we need to update all of it’s children, in this case, the lower arm. 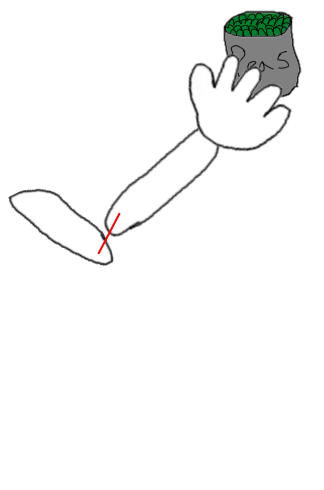 The hand’s child, the lower arm, is repositioned to match the hand’s new location

Now that we’ve moved the lower arm, we need to move it’s children as well, which in this case is just the upper arm. This usually continues all the way down the entire system until we hit a dead end. 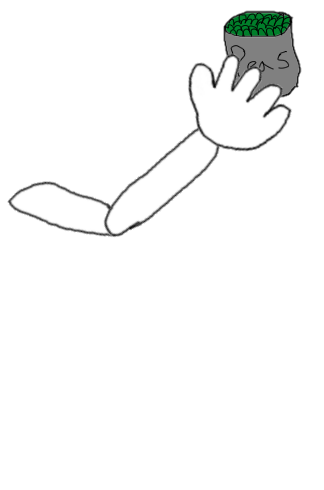 This is the basic algorithm behind IK. For convenience I’ve included the steps in gif format below.

I will admit my experience with actually building IK systems myself is limited. In the past I have built an IK system for use in drawing rope like objects, where each segment is just a line and there are hundreds joined together in series. However the algorithm gets a little more complicated when you have multiple children and other considerations such as joint constraints (for example, the arm should be limited since elbows can’t bend backwards).

Since I’m not an expert on IK, I decided to get an off-the-shelf solution for use in Arrival in Hell. There are a few out there, but the one which is held in the highest regard is the excellent Final IK system. It’s a pleasure to use, has tonnes of different features and their support team has been very helpful. 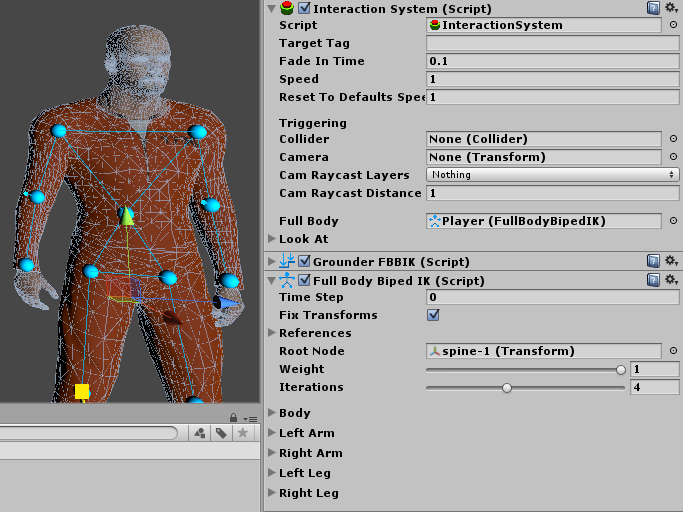 Final IK setup on the player

A target position for the player skeleton’s hand bones 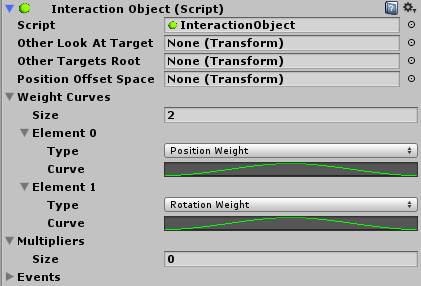 An interaction object script showing the weighting over time

This system isn’t as good as animating every pick-up animation by hand, but it is far quicker. In order to create a new object which can be picked up I:

This process is so fast, I have made a gif to demonstrate it!

Very rapid addition of an InteractiveObject which can be picked up

It’s not the prettiest animation in the world, but it gets the job done. Here is how it looks in the game at the moment. Please excuse the character model glitching a bit; it’s a work in progress.

How the animation currently looks in the game

Thanks for reading. Please leave a comment if you have any questions about the topics covered in this week’s write-up. Next week I plan on writing about how our dialogue system works.

Thanks, that was really useful, I keep this in mind for later :)
One Question: how do you detect, if the animation is finished? Do you use AnimationEvents? I searched for something like built in events but with no luck.

Sorry for late reply, my notifications were turned off for some reason.

So how it works is:
1) Start pickup animation

2) On a timed delay, it starts the FinalIK interaction. The delay is hard coded to match when the animation is almost in the right place, I could instead just start the interaction immediately and have weight 0 for a certain length of time instead. It's just evolved this way, and I don't want to fix what isn't broken :).

3) The FinalIK interaction has a weight graph, this also dictates how long the interaction takes. I have timed it so it matches the animation length (or longer probably)