It has actually started as an attempt to remake the first original map of The Alien Wasteland but with the time, it has turned to something much bigger and advanced than what I was planning at the beginning !

In the idea of improving the game and adding more content, I have created a new map for The Alien Wasteland ! 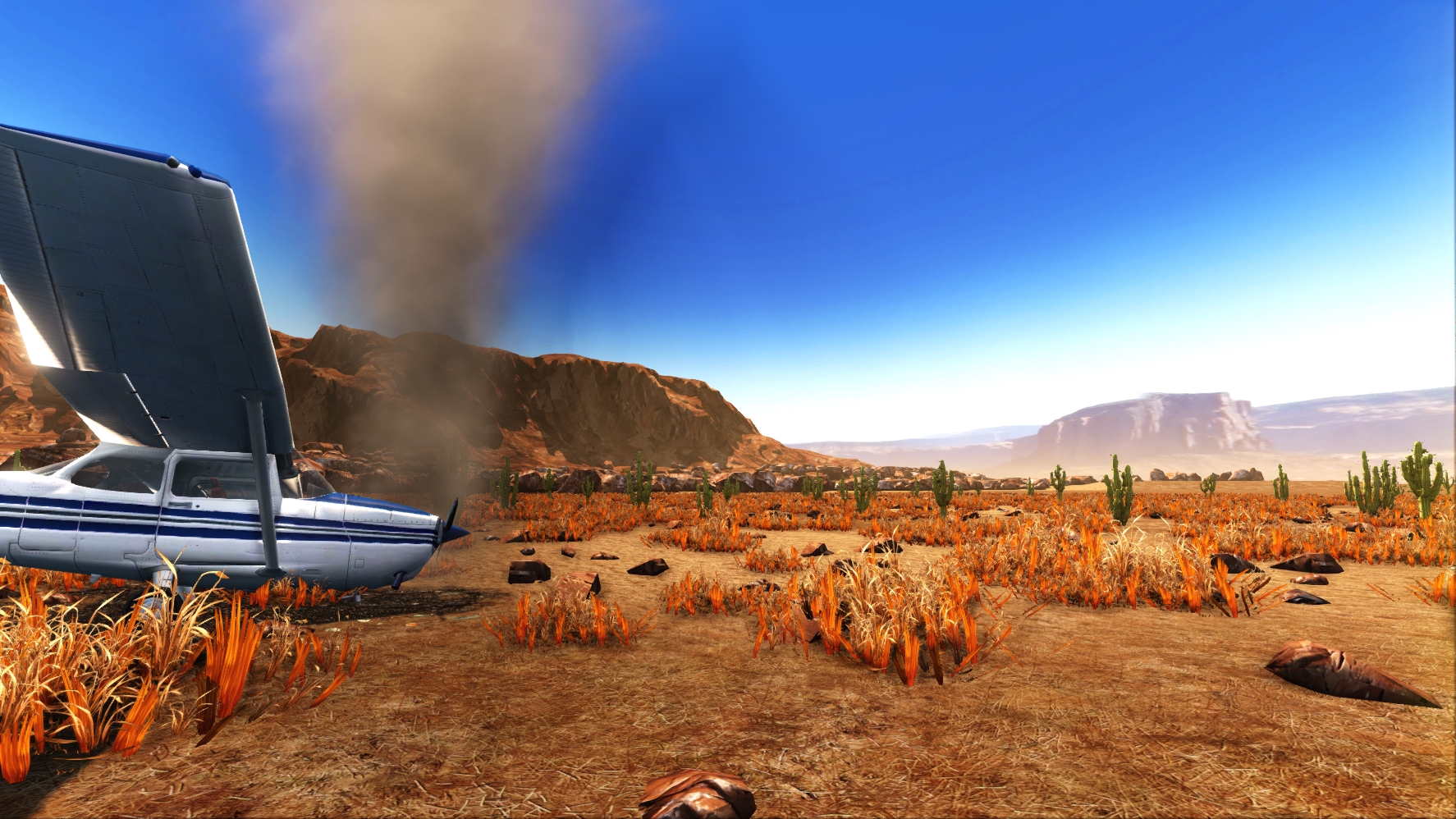 It has actually started as an attempt to remake the first original map of The Alien Wasteland to work with the new code and gameplay mechanics I have created for the Tropical Hotel map.

But with the time, it has turned to something much bigger and advanced than what I was planning at the beginning ! 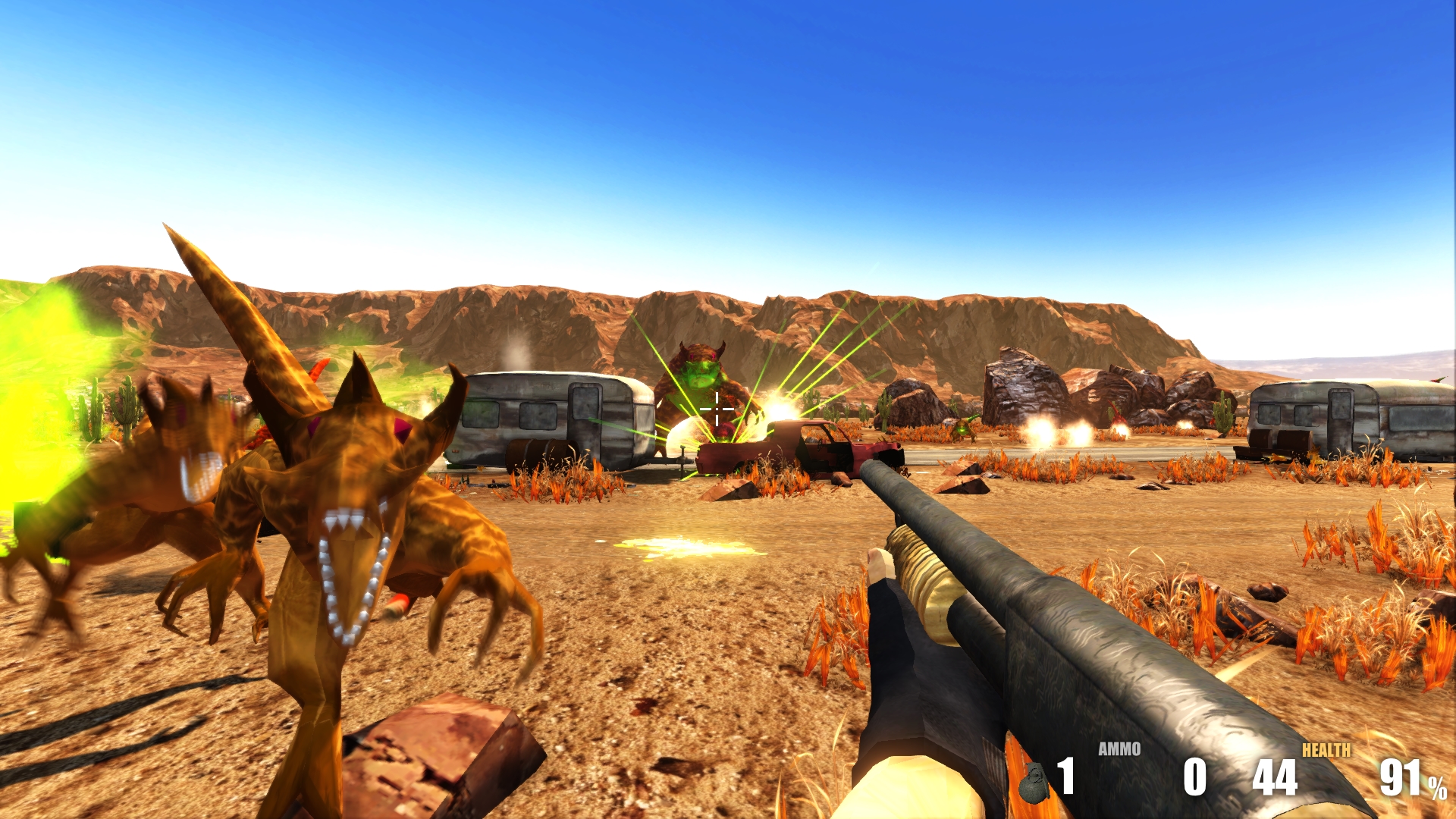 So the action takes place back in the desert, in a more wasteland-like environment with a long road passing near an industrial area and a petrol station. 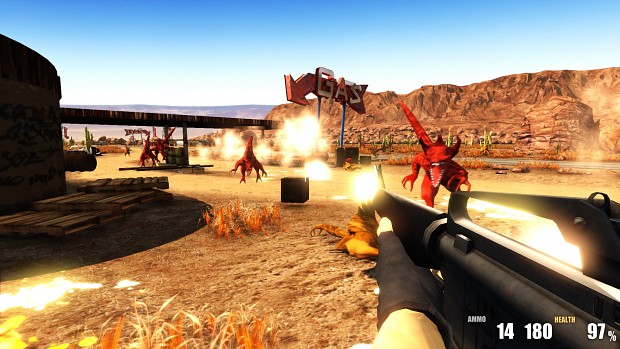 After finding the car, the player will have to explore the area roamed by aliens in researches of fuel, food and water and bring it back to the car to leave out. 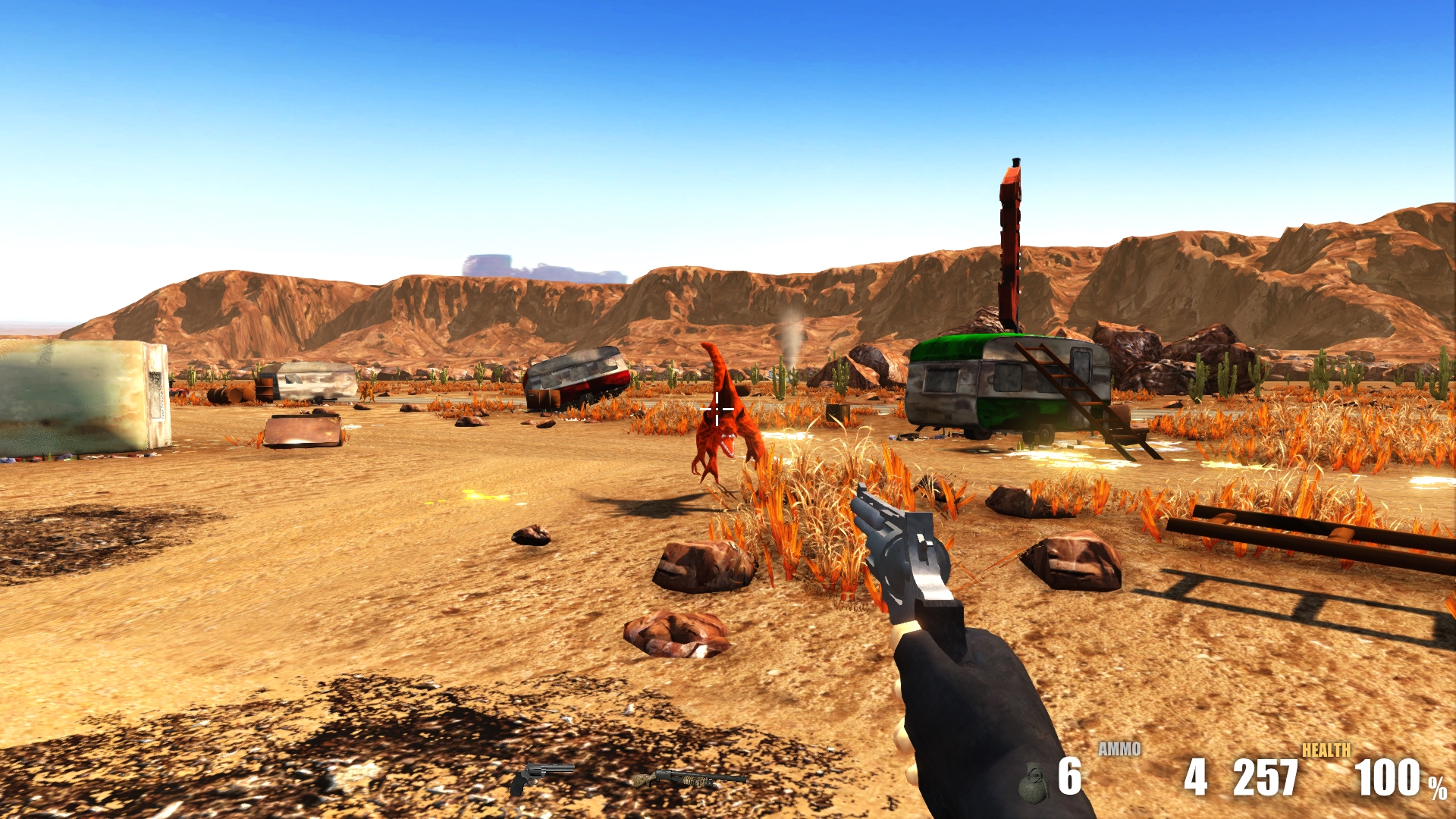 There are a lot of places and building to explore, from a restaurant and a motel, to petrol stations and industrial buildings. I have also enhanced the graphics and shaders. 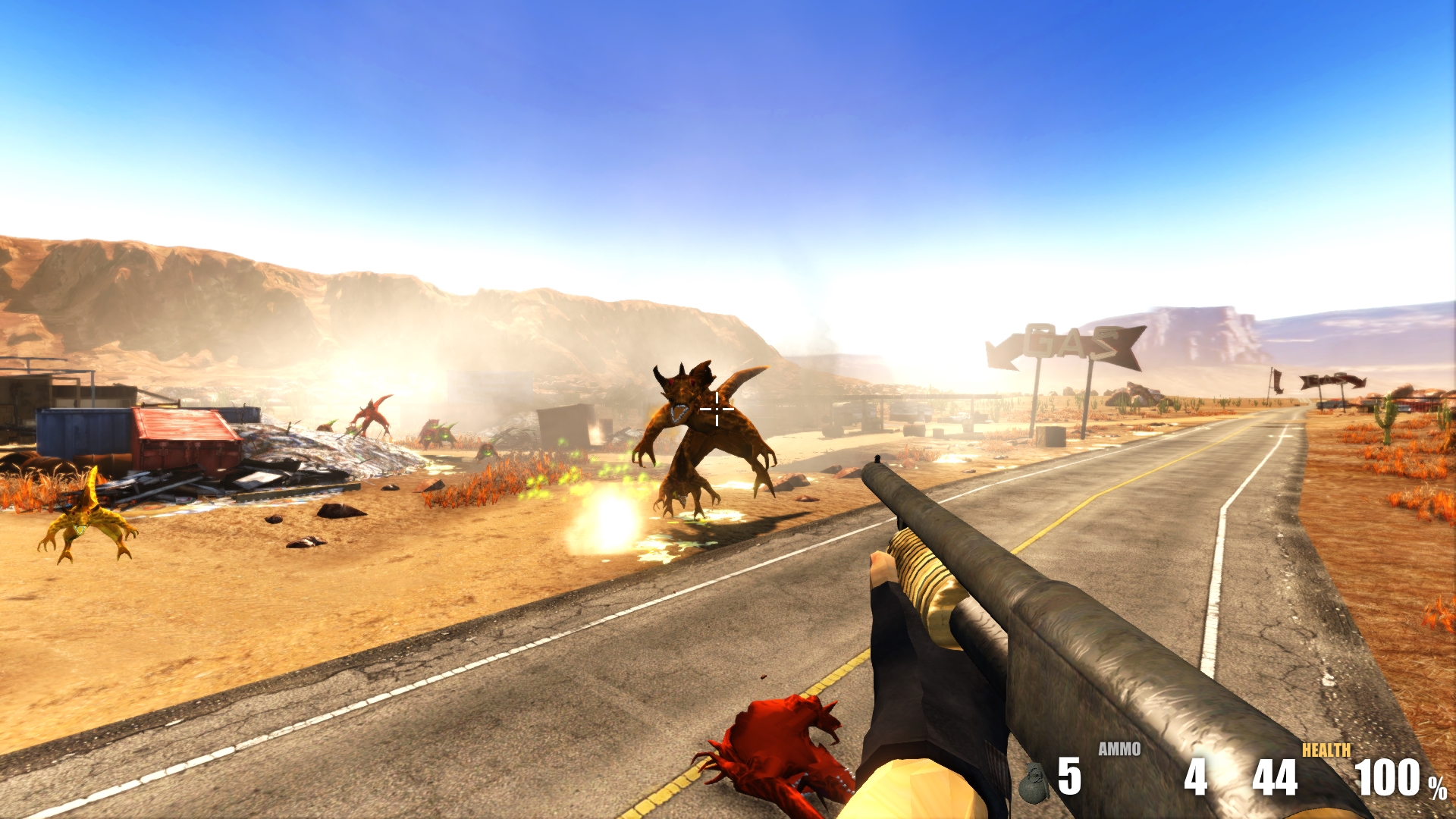 The player will have to break inside buildings to not only to find items, but also to find weapons and ammunition dispersed all around the map, as well as grenades and medkits. 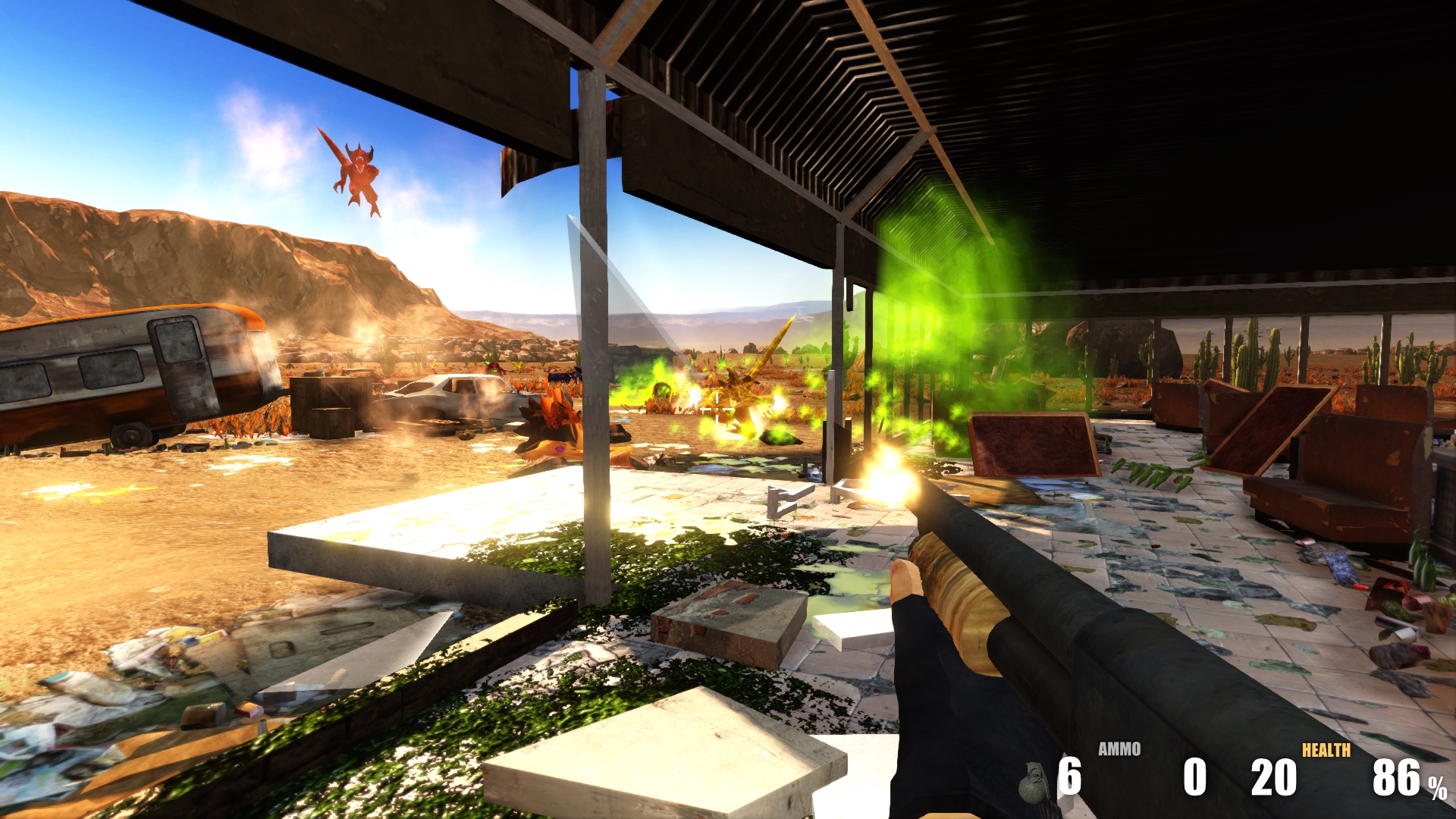 All buildings are entirely destructibles by the aliens or with weapons. It is also useful to use the foot kick to enforce doors to enter a closed building ! And even if the door resists, just throw a grenade on the wall next to it ! 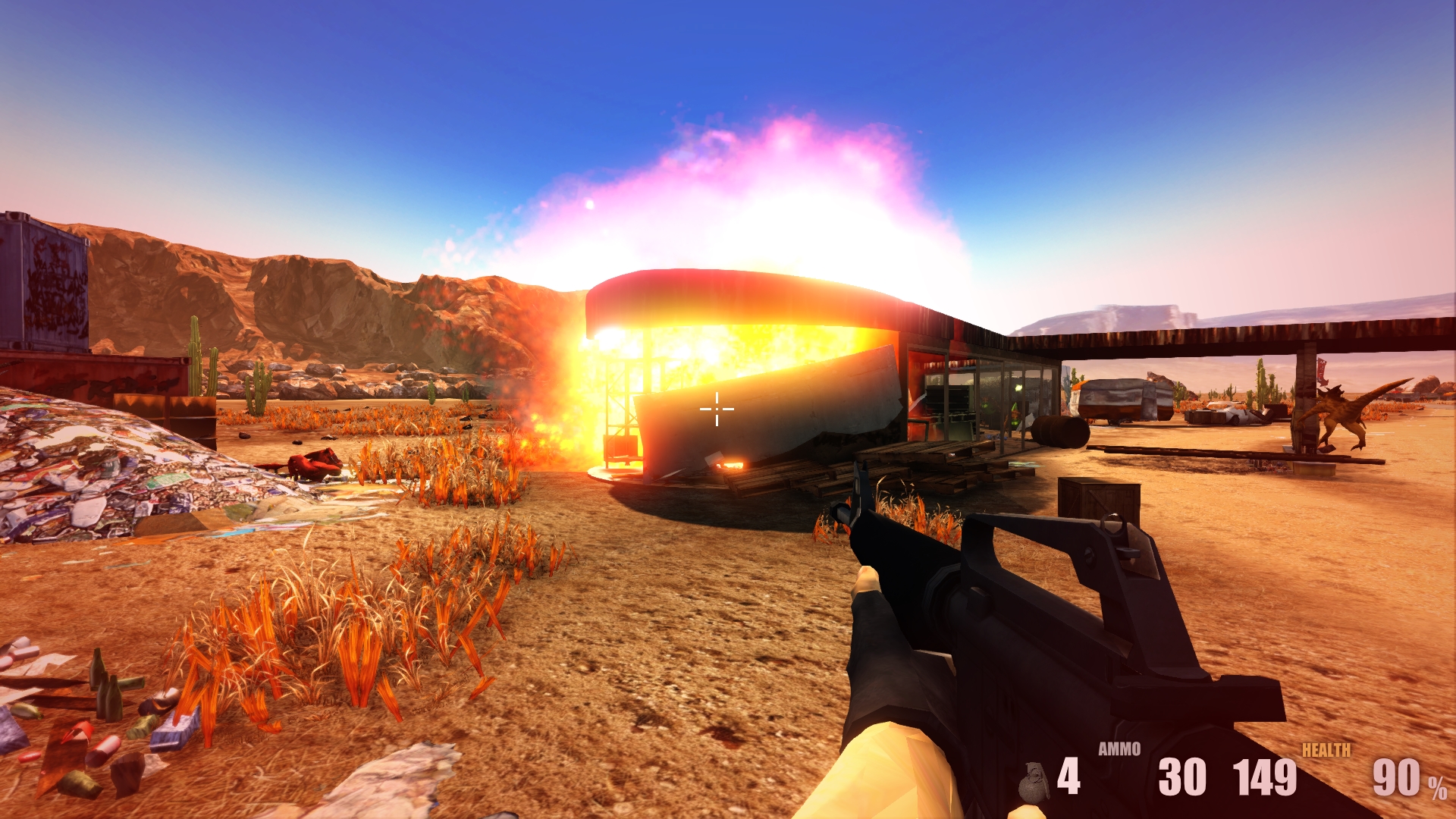 The aliens have been enhanced to make them more unpredictables and you may sometime get surrounded by them ! 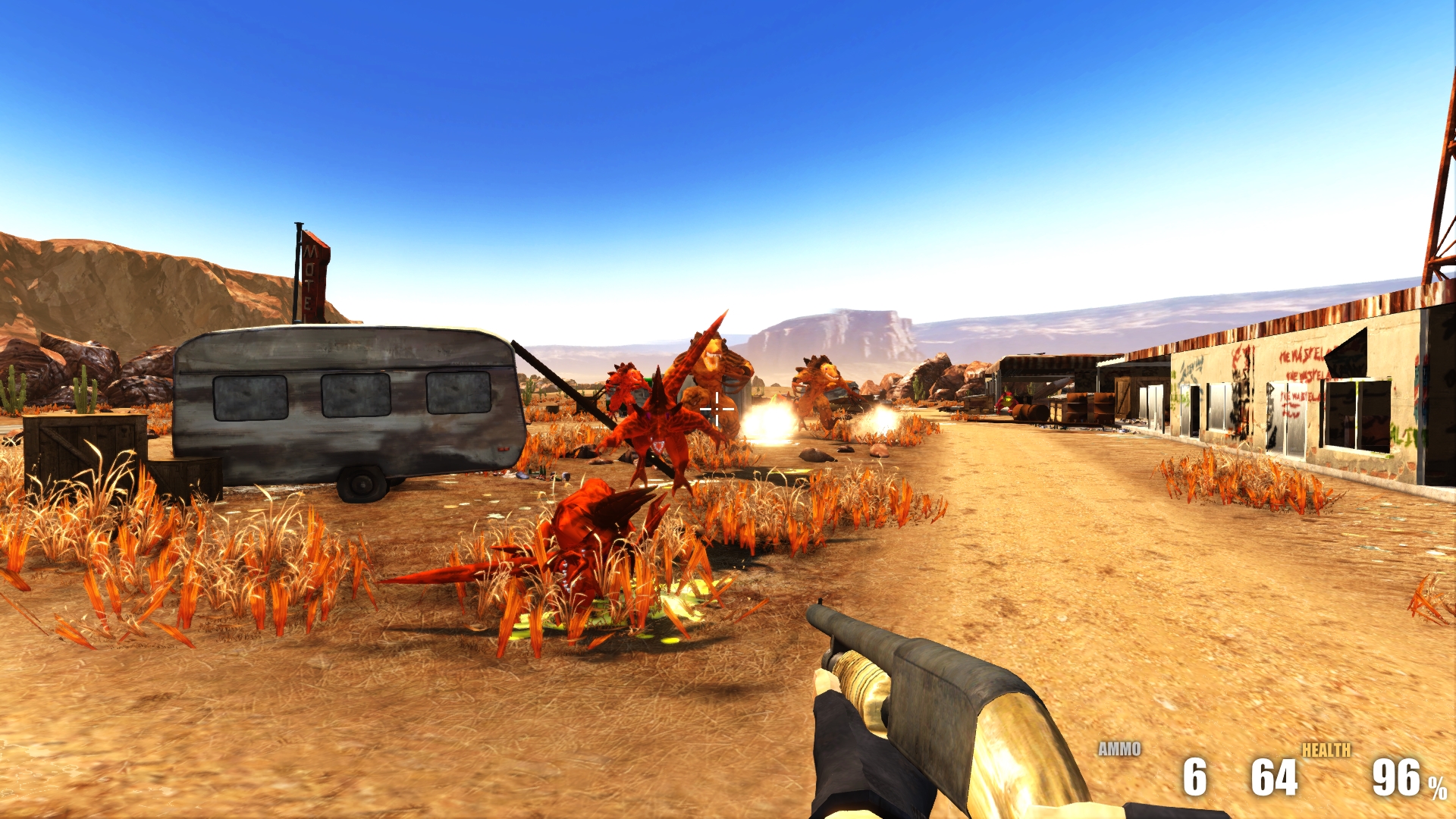 Now they can also jump much higher than before, and they have the ability to destroy walls and roofs to reach you ! 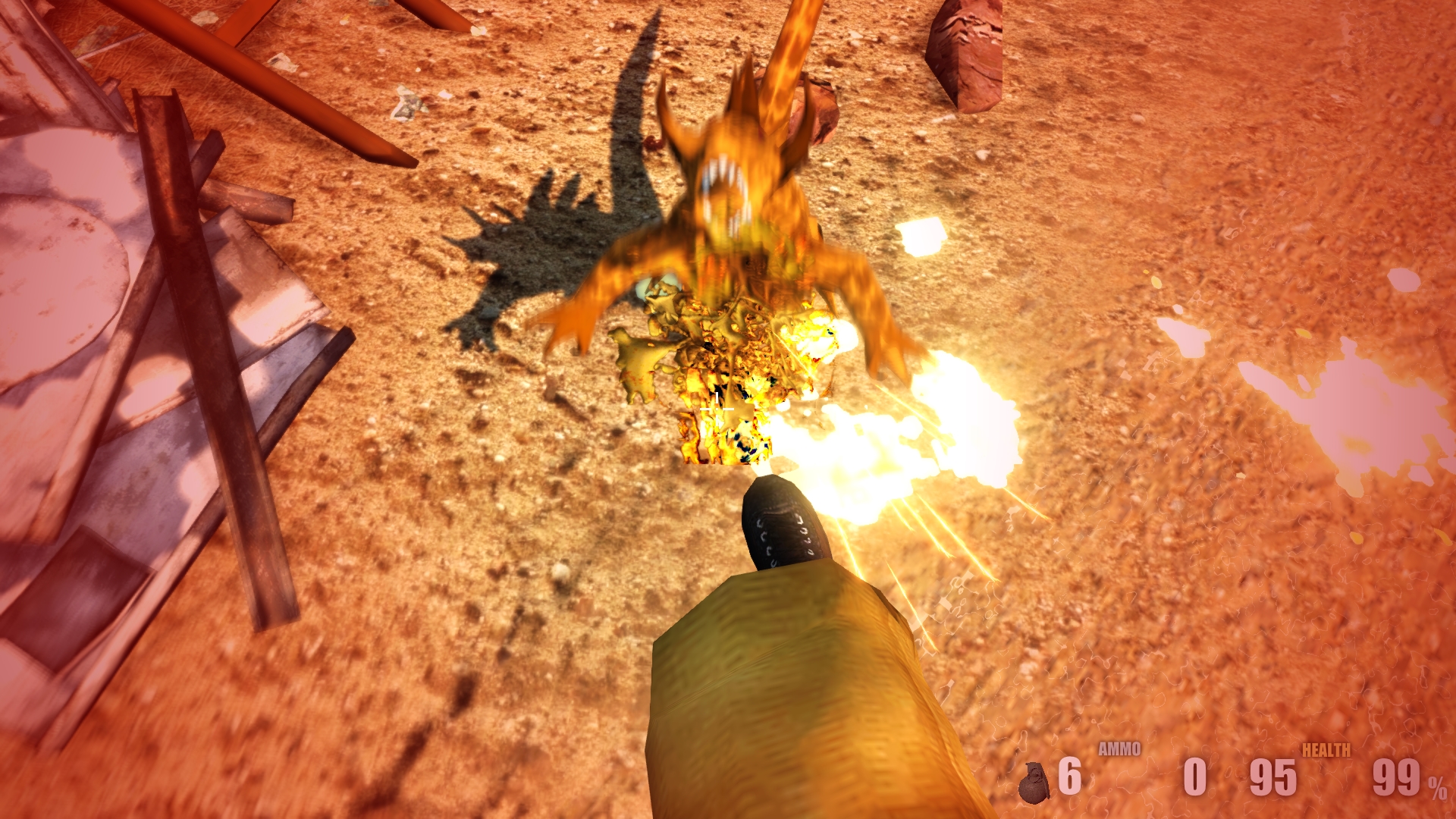 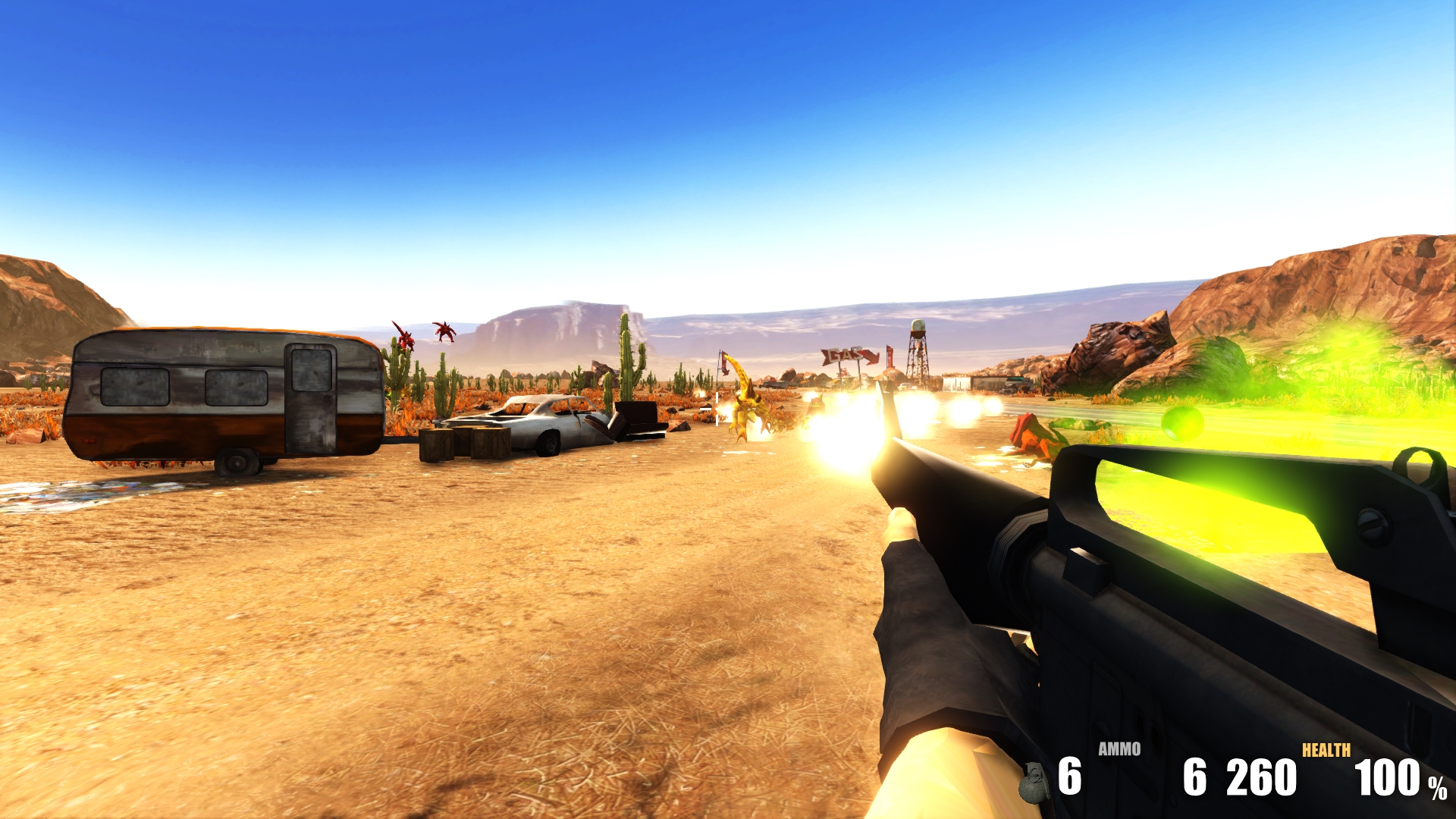 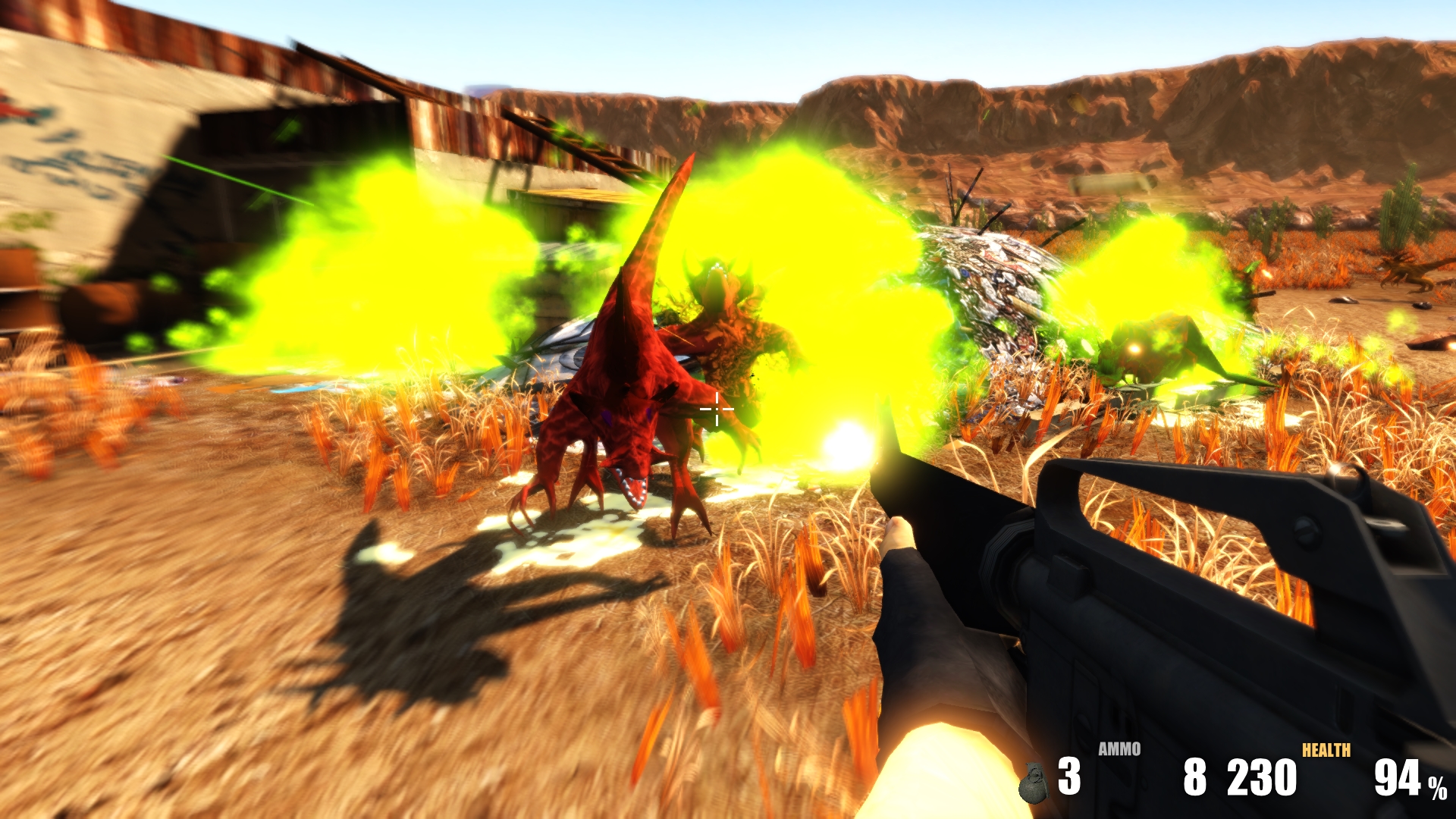 This map The Wasteland is now available in the game along with the map The Tropical Hotel I have announced about one month ago !

Keep in mind that these maps are not entirely finished and I will continue to work on them until I relaunch the game on Steam. So if you have some feedbacks don't hesitate to let me know.

About the original petrol station map, due to a lot of updates in the code and in the gameplay mechanics it is still not available in this version of the game but can be played by switching to the old release in Steam.

I am of course working on getting it back in the current version!

Also, I am preparing to release soon a free demo for everyone who would just like to try the game !

So thank you for reading this news ! And if you enjoy the game then please let a positive review on the Steam Store page and I will read it ! Or if you already played before but didn't liked at first, please try it again and let me know what you think !

Good to see! I think I'll wait for the Demo to try it out.

I must say that you are getting better and you haven't quit updating the game. Which is good.