My name is Jorge Pacheco and I'm a one man team from Chile. My first game Nomad Fleet was a really good learning experience and despite not selling too much in Steam it allowed me to start the development of a new game and continue my dream of becoming an indie developer.

Beastmancer is a monster tamer tactical RPG. You play as an adventurer with the power of capturing and "binding" monsters in order to make them fight for him/her. I would say my main sources of inspiration are Heroes of Might & Magic and Pokemon. While you can explore by moving your character in realtime in a top-down view, the battles are fought in a turn-based arena where you deploy your monsters vs the ones of the enemy (another Beastmancer or a pack of wild monsters).

Why make this game?

I learned some things after making Nomad Fleet:

Stick with what you know:

I like turn-based games and RPGs, I think I have enough experience playing them to know what works and what doesn't. I also think that if you are an indie you have to work in games that you would be willing to buy if you see it in Steam or other store. Of course, this could lead to derivative work but frankly I don't consider myself an artist so that's ok.

Maybe you will disagree with me on this but I think that action games (hack-n-slash and FPS) require more polishing, basically they require better animations, better controls and better "feel". The problem with this is that polishing is not something specific that you can automatize, is hard work and is time and therefore is money, money that is scarce (also is easier to screw up in my opinion). Of course, making all the interconnected systems of a turn-based game (levelling, inventory, tactics, grid pathfinding, etc) is not gonna be quick either but at least is something that I can reuse, which leads me to my next point...

A base for future projects:

I don't know about you but I have a ton of game ideas, so much that sometimes I have trouble sleeping. Of course, I just discard many of them because they are too expensive for me to make (yet) but there's an increasing number of ideas for tactical RPGs that I would like to make and that are not that demanding in terms of resources. I'm already reusing some code from Nomad Fleet so it makes sense that I make code that I can reuse or at least use as a base for future games that require turn-based combat.

I have the assets and resources:

In the postmortem of Nomad Fleet I mentioned that I used store assets (3d models mostly because the code is mine) because I couldn't afford custom work. Well, sadly that's still the case, I have some savings and a bit of money thanks to the sales of Nomad Fleet (around 3800 copies sold during a year) that is not enough to hire talented freelancers so I needed to find a good source of art that is coherent in style and theme and big enough to make a full game before I run out of money. As far as I know a few of the 3D models I'll be using for this game used to belong to a now dead korean MMO, that's why they have quality, style and animations ready which leaves me free to focus in the coding. Maybe one day I'll have enough money to have lots of custom art... maybe one day (sigh).

What more can you tell me about the game?

Its pretty early to be making promises because I still don't know what I will need to cut, change or expand but the general idea for the game is this:

It is said that this world was only inhabited by humans in the past. Nobody knows the nature or cause of the cataclysm but we know that it brought elemental storms that destroyed entire countries, it brought magic to a logical world and it changed most of their fauna and people into magical creatures, as majestic and powerful as they are destructive and monstrous.

The last humans were on the verge of extinction until we learnt how to capture and bind these monsters, now they serve us. We are Beastmancers.

I expect to have a good number of monsters, each of them capable of levelling and learning new skills. There's so much that can change but I'm considering having several categories: darkness, fire, humanoid, animal, etc. The idea is that every creature has a main category and a secondary category (for example a ghould would be Undead/Humanoid) that will determine its strengths and weaknesses. They will also have stats like Initiative, Speed, Health, etc.

While I like games that have some degree of customization I don't think I have the resources to do that so I'm leaning to have a fixed main character with a fixed backstory.

I want this game to have a paper map for the overworld with icons for every location that you have unlocked so you can visit them. I rather not risk myself trying to make something open world. I'll post more images showing this later but a close example would be the continent map of the game The Last Remnant.

I would like to have a multiplayer arena included in the single player campaign instead of a separate mode, I would also like that players would be able to bet items or in-game money (don't worry, there won't be microtransactions of any kind). Of course, this is mostly wishful-thinking, I need to see how I do with the rest of the game before deciding if I invest in multiplayer for the game. 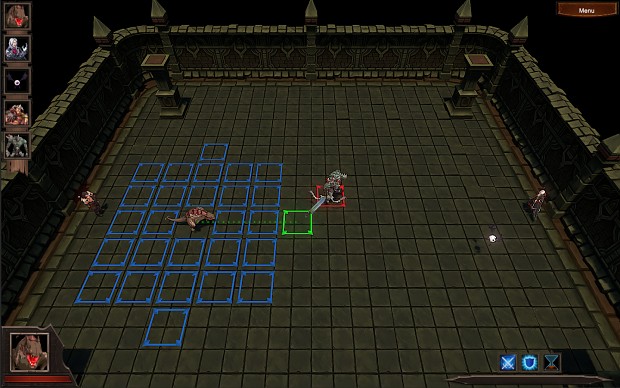 Now I continue working, there's a lot to do but I feel confident that I can deliver and keep this page updated with all the things I'm doing, if this sounds interesting to you please consider following the project and/or spreading the word. The worst enemy for a one man indie dev is the lack of visibility.

Interesting, because of ___turn based___ and your world seems to have nice graphics!

Hey Jorge. Great to see you starting a new game! Good luck and I'll definitely keep an eye on it.

Thanks, gotta keep active if I want to stay in the industry.

I also, am working on a tactical RPG as a basis for future projects! As a fan of monster tame games, I'll be sure to keep on eye on this