Annex: Conquer the World takes place during the Great Crystal War, a chaotic war that spans across the globe. Fueling the war are red crystals, the answer to the world's energy crisis. A scientific breakthrough showed the vast energy potential stored in what was once thought to be benign minerals. This allowed for a rapid development in technology, as well as immense economical gain by the export of the crystals. Here is a rundown of the biggest contenders in the race for global dominance:

Annex: Conquer the World takes place during the Great Crystal War, a chaotic war that spans across the globe. Fueling the war are red crystals, the answer to the world's energy crisis. A scientific breakthrough showed the vast energy potential stored in what was once thought to be benign minerals. This allowed for a rapid development in technology, as well as immense economical gain by the export of the crystals. Here is a rundown of the biggest contenders in the race for global dominance:

The East Ocean Alliance is a unified defense force, with the goal of maintaining global peace. Formed after the end of the Chasm War, many of these nations were devastated by the massive invasion of the Cruix republic, until the republic was finally defeated and driven out by the Kingdom of Alandia. The Alliance fought a second war with the Cruix Republic thirty years later, and was able to deliver a crippling blow to the republic by use of the first atomic weapons. In the past 30 years since the Alliance maintained its dominant role in global affairs, with Alandia acting as the head. At the outbreak of the Crystal War, the Alliance found itself fighting a war on two fronts: The war against the NEO Republic in the north, and the war against the Shadow Organization in the Southern Wastelands. A year into the war a failed attempt at a coup d'état against Seng a former Alliance nation, resulted in the defection of several divisions of the Alliance military and the formation of the Alliance Renegades.

The Alliance is pretty straight forward, and offers a large variety of unit classes and strategy, with some of the best quality units in their class. There is also a good balance between armored short range weapons and powerful long range support weapons. The Alliance also has two tech structures: the Silo and Tech Lab, each with its own set of upgrades. This allows the player to have a choice of High tech support units (Tech lab), or Low tech brute force units (Silo). This forces the player to pay a lot more, and wait a lot longer for tech tree progression than other factions. However, once the entire techtree is complete you will have a fearsome army at your disposal. the Alliance also has a unique hero unit Kestrel Aside from incredible attack, defense, and hp regeneration, she also can control two super-weapons, the Airstrike (requires Tech Lab) and Nuke (requires Silo) 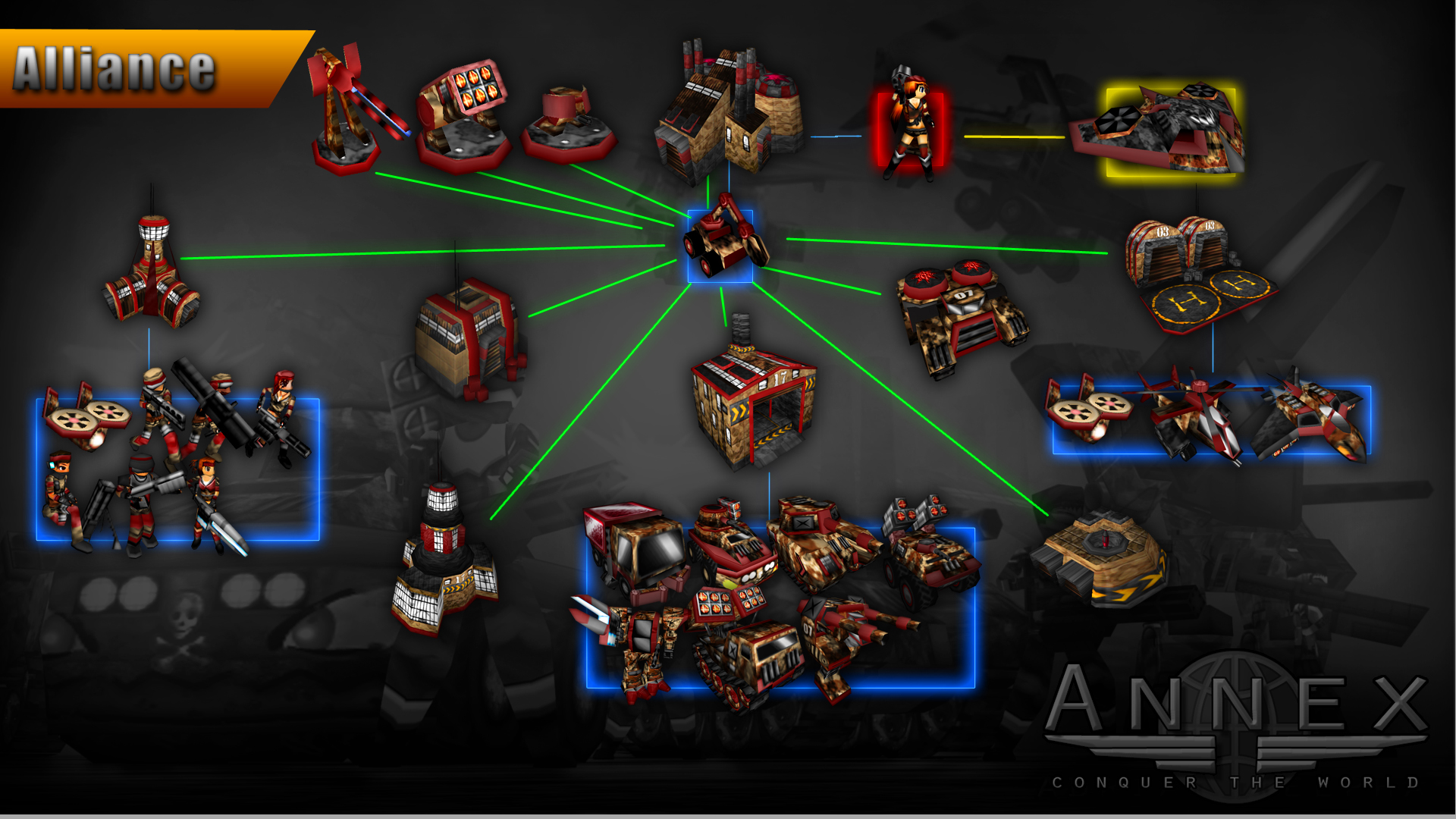 Once the mighty Cruix Republic, the NEO Republic is a nation rebounding from the brink of economic collapse. 50 years ago the Cruix Republic, with its huge deposits of oil and gold, Cruix was able to acquire an extremely powerful military force. A military force with the most advanced + well trained armored divisions in the world. With them the republic launched a successful invasion campaign against the nations surrounding the East Ocean. One by one the small nations quickly were over run by the Republic's military might. Until they met their match, in the final 2 years of the war. Alandia, a wealthy nation built on trade between the East and West Oceans, with its vast wealth was able to outlast the Cruix Republic's now worn out military. Which ended the Chasm War However, despite their defeat Cruix still remained as the industrial powerhouse of the world and quickly bounced back. 30 later the Republic launched a second campaign against the new East Ocean Alliance. Catching the Alliance unprepared, as Cruix' tanks outclassed the weaker tanks of the Alliance. However, the Alliance was able to catch up technologically, and was able to push Cruix out of Alliance territory. To ensure that Cruix doesn't come back, Alliance leaders decided to use their secret atomic weapon against the republic's biggest industrialist complexes. This in combination with the immense cost of fighting these two wars left Cruix in financial ruin. For 40 years the republic was in chaos, civil wars, and public unrest, until 10 years ago when Senator Sigel Viper and his family came into power. Harnessing the newly discovered power of the crystals, he was able to re centralize power under his authority, and secretly rebuild the nations military. At the start of the Crystal War, Viper ordered an invasion of the crystal rich nations in the north.

First thing you will notice is the lack of base defenses. The only defense structure is the pillbox. While more armor than any other defense structure, they are only effective against Infantry and unarmored vehicles, and cannot engage air units. To defend using the Republic, its best to supplement lines of AT Rifles, and Snipers, as well as place your fortress in the front lines as it can defend itself against ground tanks. Also recommend purchasing the Advance Walls Upgrade to increase structure hp. The Republic military strategy revolves around brute Ground power and quick and cheap deployment. The faction lacks in a proper Air force, with only very average jet fighters, To increase your units effectiveness, promote some officers and keep them nearby. They will increase their attack by 10 and also have an ability "Raise Morale" that quickly restores unit HP. Much like the Alliance the Republic has two tech structures (Command HQ and Fortress) and a Hero unit (Karina), unlike the Alliance, though you must produce a Command HQ before the Fortress. Karina also carries the faction super weapons the Nuke (requires Fortress) and the Republic Wrath (requires Command HQ) 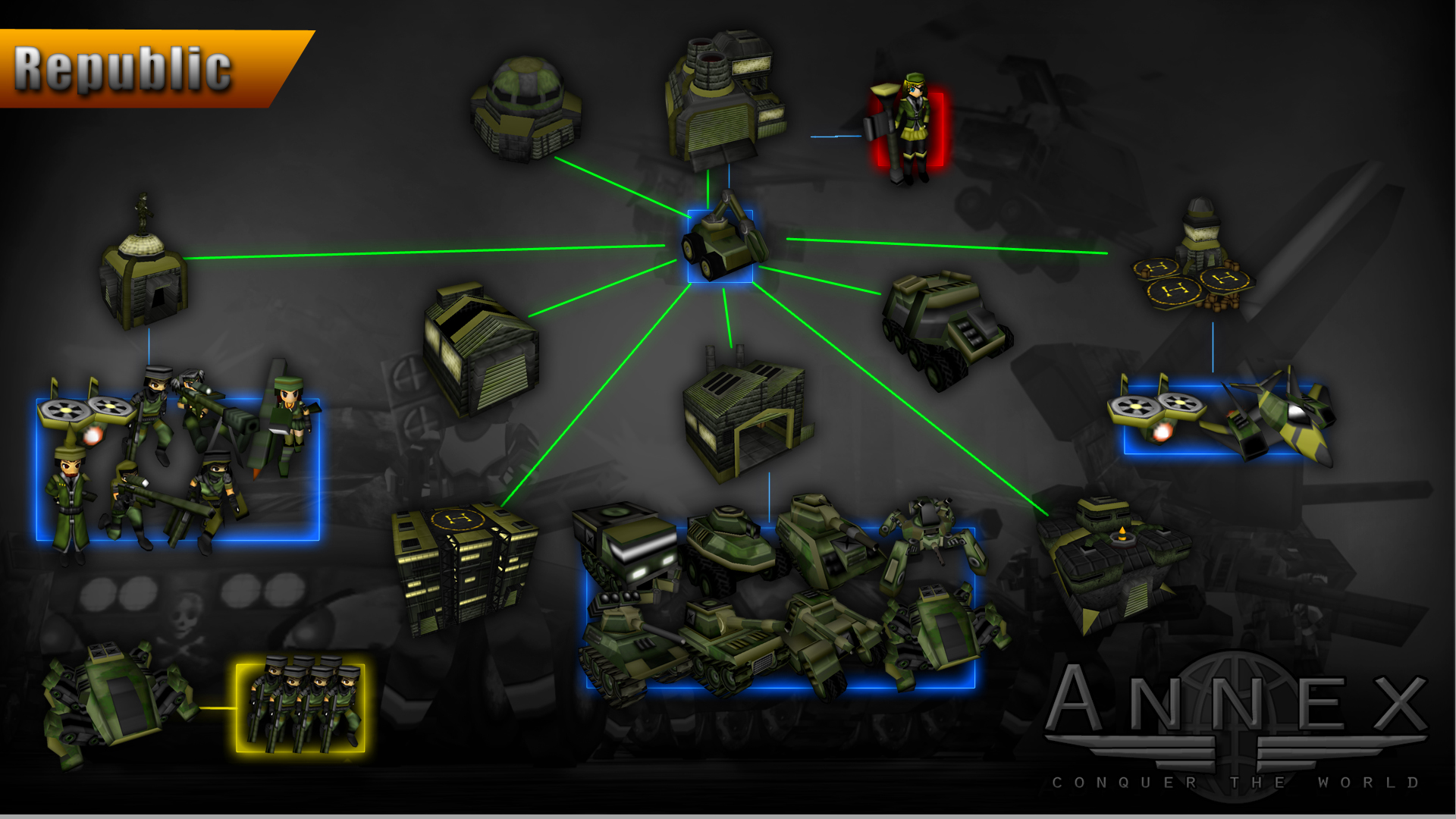 Due to the secretive nature of this organization, little information is known about this dangerous faction. Here is the data we have:

The Shadow Organization is a terrorist organization involved with the black market trade of crystals. While having cells around the world, they are believed to be centered around an region known as the Southern Wastelands, which is rich is crystals. There is a belief that many non Alliance nations willingly trade with the Shadow Organization, and even allow and cover their bases within their borders, in exchange for weapons sales. Its believed that they spend much of their income on crystal research, weapons development, and even bio-engineering. As a result, heir military is extremely well equipped and well trained, even more so than some of the largest nations of the world. They regularly attack convoys of both Alliance and Republic crystal harvesters. It is believed that they are responsible for various assassination attempts of leaders in both the Alliance and NEO Republic. Unfortunately, there is no information on who is in charge, and even less information on what is their true intent.

The Shadow Organization have some of the best offensive units in the game, but are limited by their lack of unit variety, and armor. Their combat priority tends to be close range combat rather than mid range or long range, and higher priority on speed than defense. The exception to this is the Scorpion tank, which can transform from a medium tank, to a long range bombardment turret. This faction also has no hero unit, instead allowing you to recruit a squad of 3 elite Infiltrators. Infiltrators are far superior than standard infantry, and with proper tactics can eliminate a small base on their own. Unlike the Neo Republic and the Alliance there is only one tech building, the Shadow Lab This faction also has two separate super-weapons: the Shield Generator and the Orbital Strike Relay. The Shield Generator, when activated will create an energy bubble which renders units practically immune to damage within the shield, for a few seconds while, the Orbital Strike can call down a energy strike (or two) via Satellite. You can have both simultaneously but doing so can drop your population significantly. 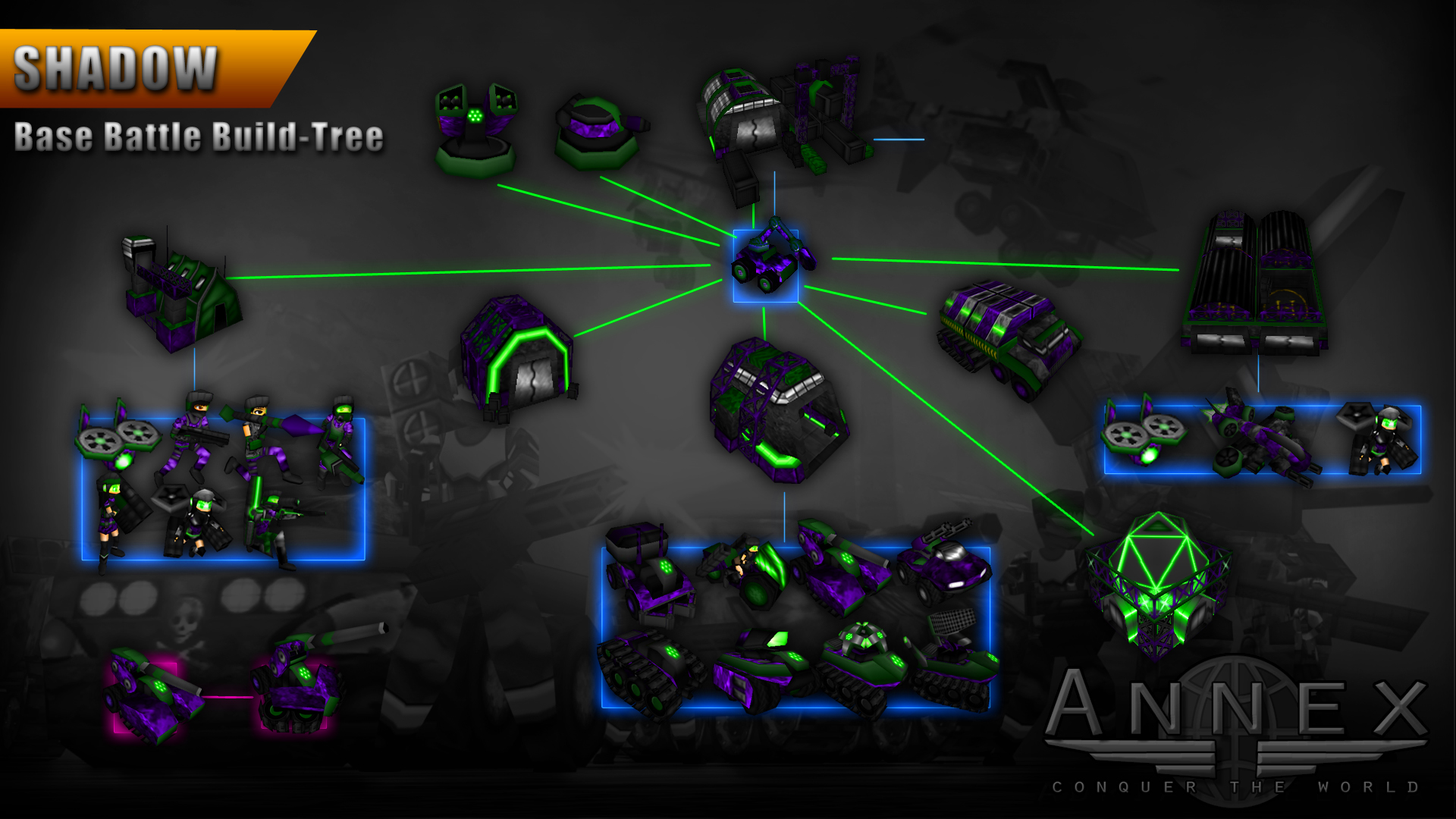 Not all members of the East Ocean Alliance are happy with how Alliance runs things. The Alliance has a pecking hierarchy with most military + economic trade and support being focused on the Larger economic powers, while the smaller nations tend to be forgotten, all the while these small nations are forced to pay tribute in order to be a part of the Alliance. During the course of the war the small agricultural nation of Seng refused to participate in the war against the Neo Republic, and couldn't pay tribute due to its poor economic standing. However, despite pleads from their government the Alliance nation of Paltina branded this nation as a traitor, and sent several divisions to Seng in at attempt to subdue and make an example this 'rogue' nation. However, during the course of the operation, many Alliance soldiers were appalled by the extreme violence, and abuse that divisions from the nation of Paltina invoked on the citizens of Seng. Even more so at the Alliance just turning a blind eye to the matter. This forced several divisions to defect from the Alliance, including an elite division from Alandia, and attack the Paltinian Military station there. Paltina withdrew and the defected divisions formed the Alliance Renegades, to protect the nation of Seng. Unfortunately a heavy counter offensive by the Alliance proved too much for the relatively small Renegades. While prepared to fight to the last man the Renegades were saved by a surprise attack on the Alliance from The Shadow Organization. Seeing no alternatives the renegades signed a contract with Shadow, agreeing to harvest the crystals in Seng in exchange for weapons and money by the organization. Their goal is the removal of Corrupt nations in the Alliance, in particular the nation of Paltina.

As former Alliance soldiers, This faction has a lot in common with the Alliance faction. However, this faction does not have the direct firepower that the other nations have, meaning the player has to play strategically, utilizing ambushes, hit and run, and sneak attacks to win. Standard direct engagements can win if your lucky, but cannot be your main attack tactic. While not having as many unique units as other factions, this faction has unique tactical options that the other factions do not. A Unit that can switch from 7 different equipment at any time, an light assault vehicle able to be airlifted across the map, can summon attack drones, launch long range cruse missiles, and a powerful Acid bomb which deteriorates armor over time and can be used to block incoming enemies with a wall of deadly acid. Tech tree is very simple and straight forward with only one tech building (Satilite Uplink. No heros but you can recruit 3 elite Commandos much like Shadow's Infiltrator. 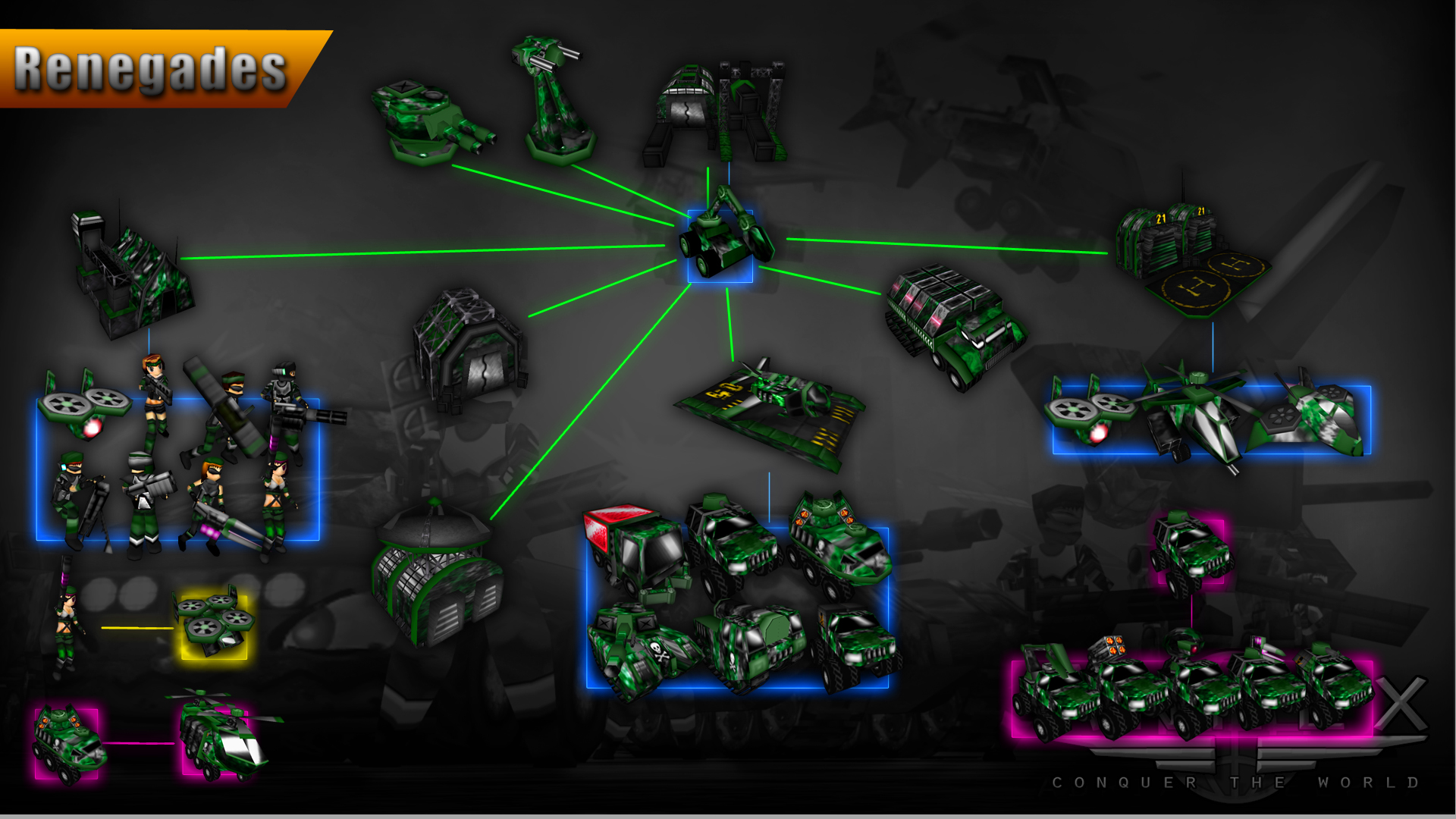 All Four Factions will be playable in release 4.

Great news! Looks like the renefades are the hardest since needs more mictomanagament, you can upgrade most of the units at your will, and use them specifically for something.

yes the Renegades are the most micro orientated but that makes them so fun!