The best looking version of Drunk On Nectar is now here with this update that adds new animations, improves existing visuals and enhances the whole game. Come by and check it out! :) 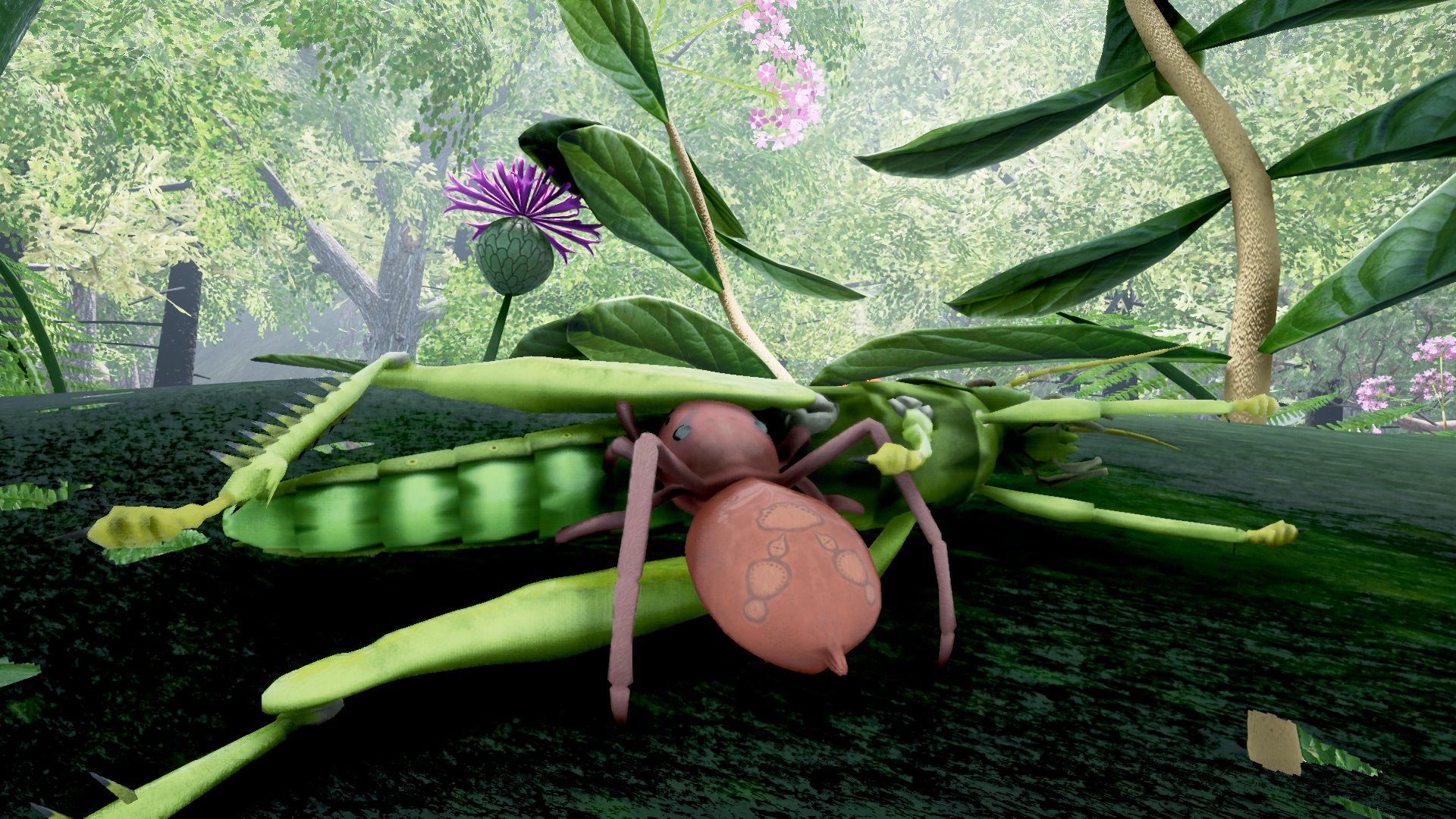 With new animations, visual bugfixes to the entire game and more intuitive controls, this is the best time to complete your Act 2 playthrough if you haven't yet completed all 9 life stages!

Numerous improvements to gameplay, camera and controls also come with this update, making it the definitive edition of the Jumping Spider lifecycle in particular and the best version of Drunk On Nectar (The Nature Simulator) in general.

Enough with words! As this is a visual update, may bright and colorful imagery fill your screens below!

In Picture Above: New topple animations for all creatures; the body and limbs no longer intersect with the floor 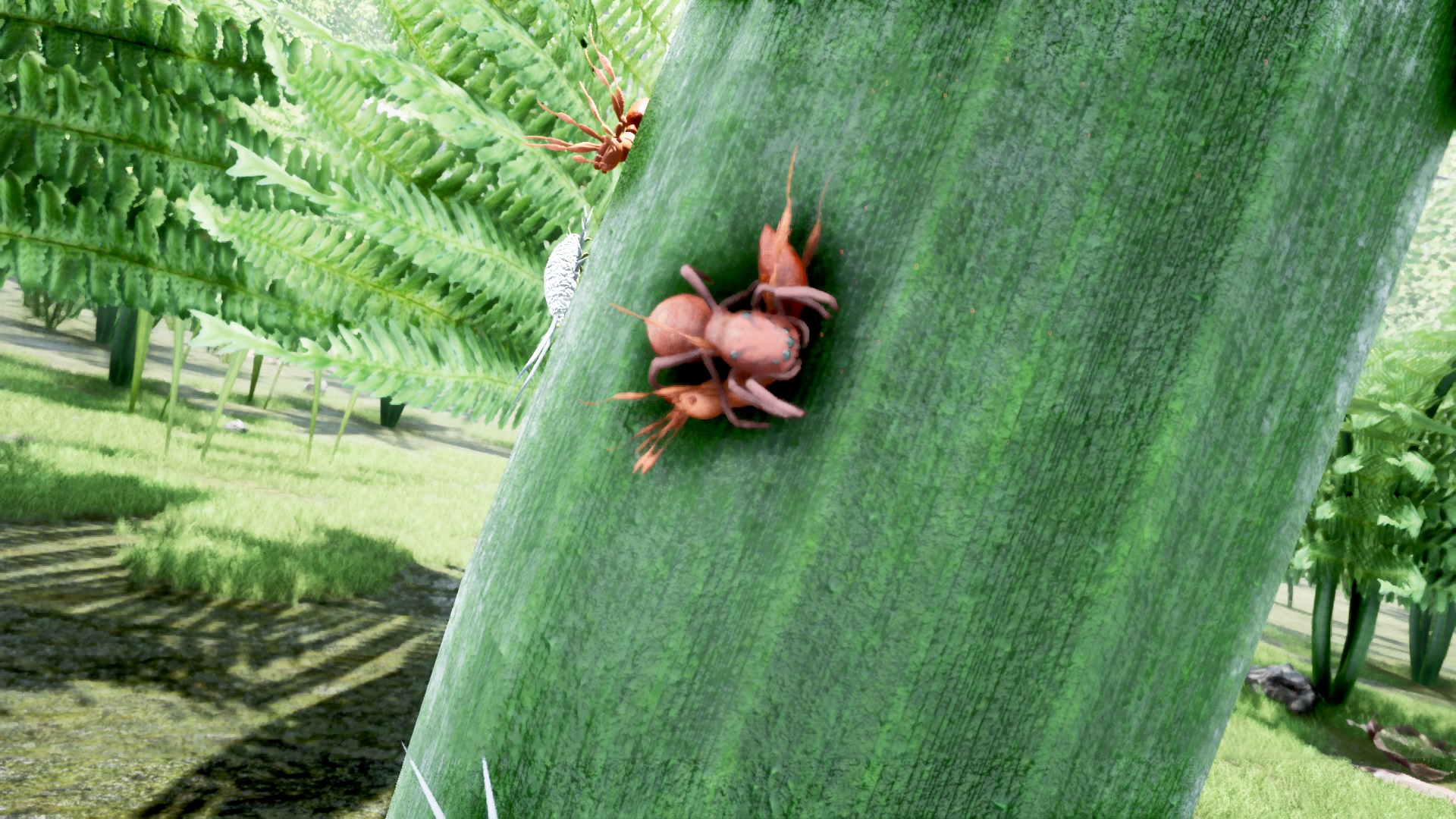 In Picture: Ants now behave far more convincingly while subdued. Several bugfixes have been made to their swarming/stinging behavior as well! 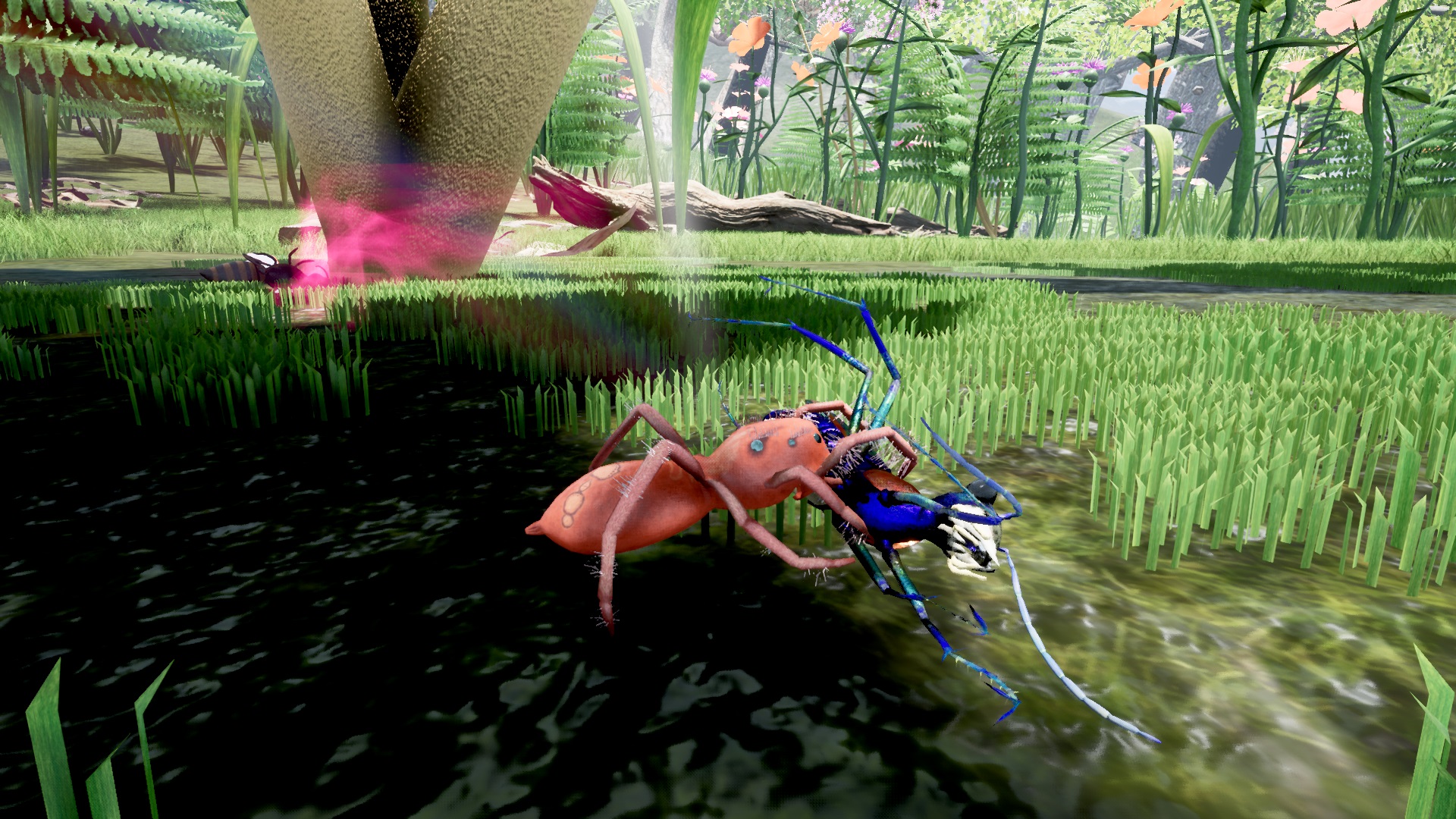 In Picture: The old rivalry between Tiger Beetles and Jumping Spiders now has added visual interest to it! 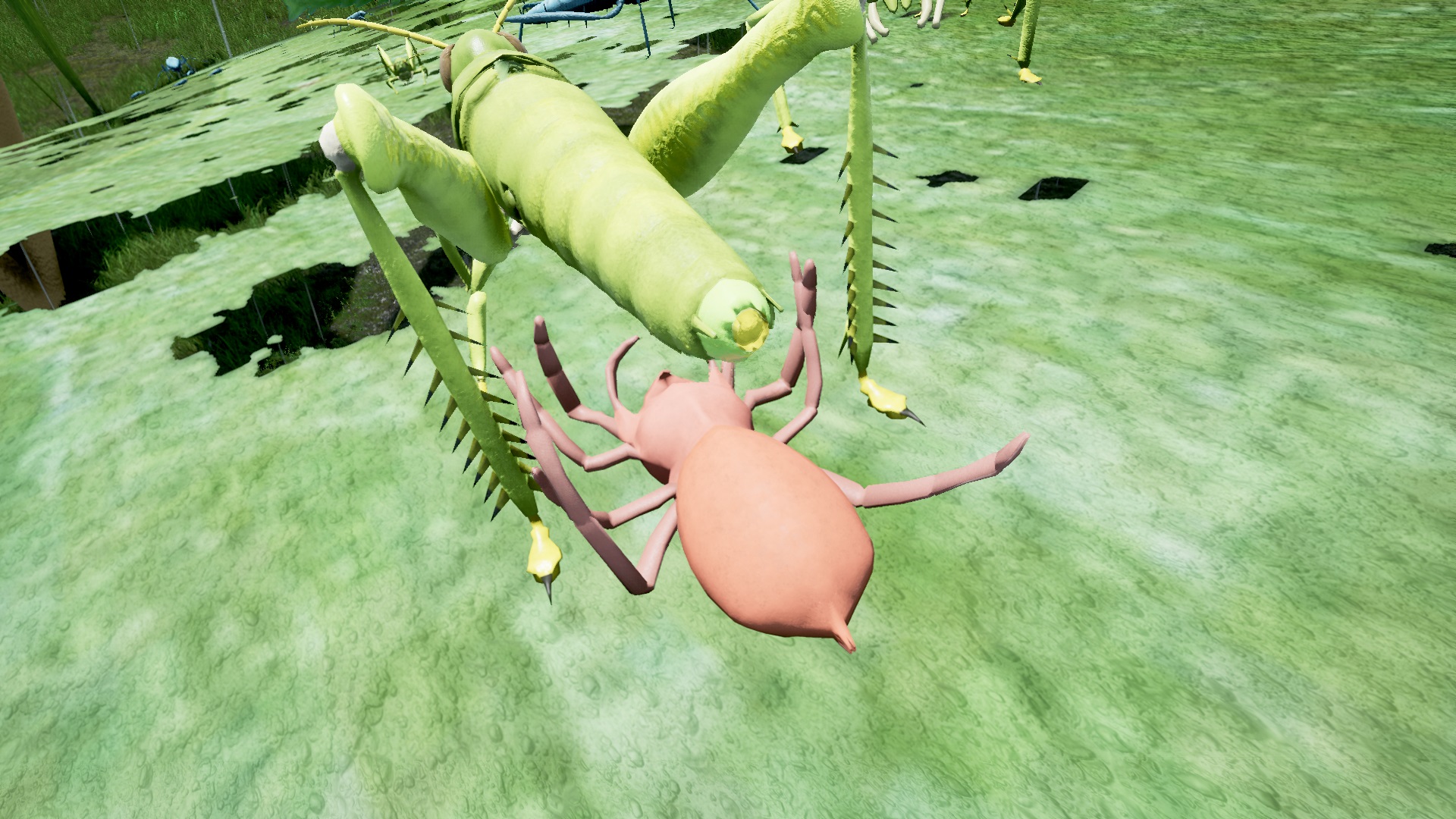 In Picture: Watch out for those hind legs! Those spiked & mighty Grasshopper limbs will flatten you in style!

(Pssst... Sneaking (with new animation!) comes to your rescue!)

Below is a more compact visual overview of all the new goodies: 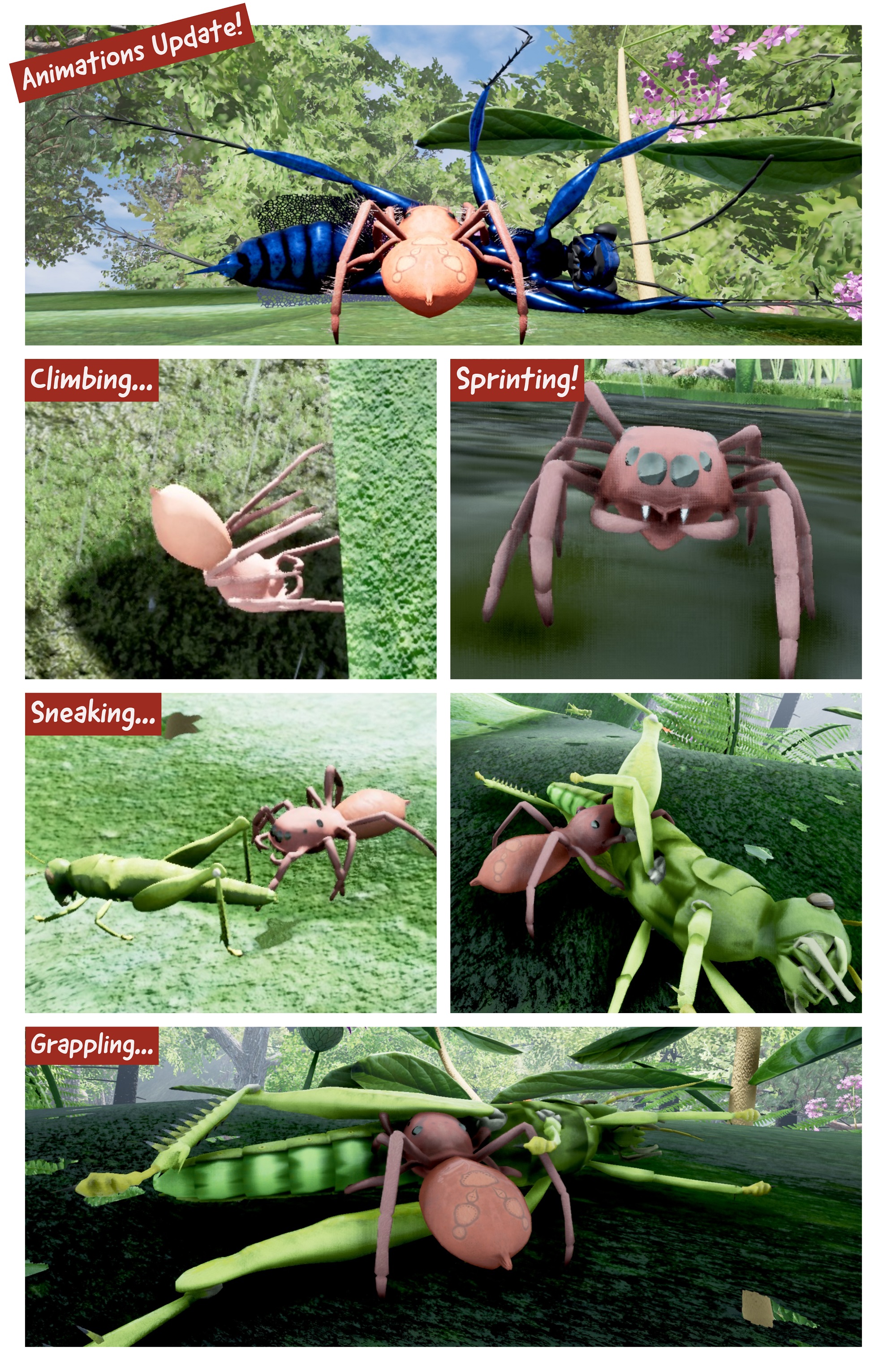 Some written text is also necessary to do justice to the vast number of improvements this patch brings :)

An original music piece entitled The Song Of Lifecycles Act 2 has been added to the game :)

This is the longest music track in the game and perhaps the most lively one too. Drunk On Nectar now features a total of 12 unique music tracks written exclusively for the game. More music shall trumpet forth in the days to come!

Visit Extras -> Music of DoN to give it a listen! 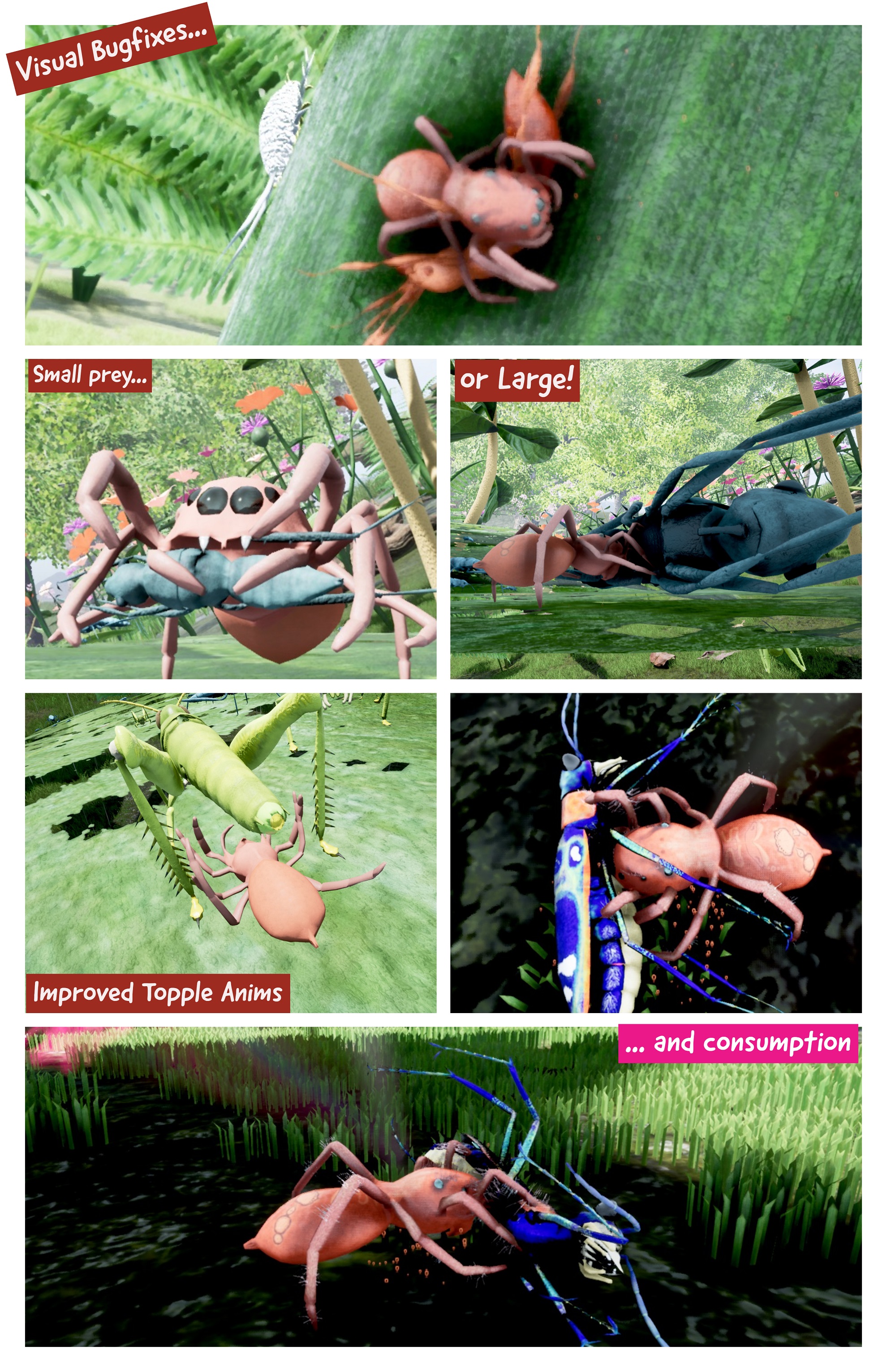 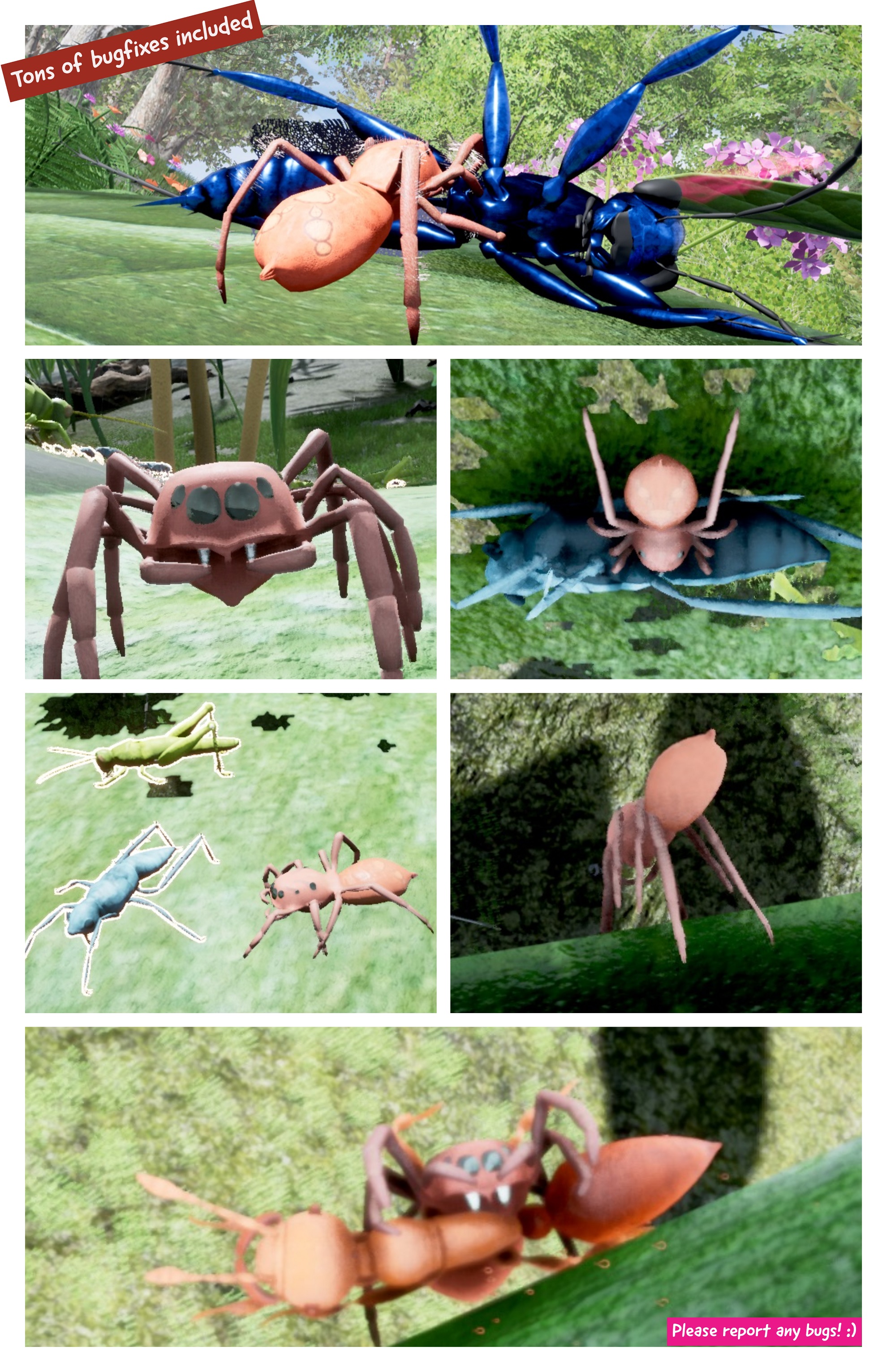 QA for this patch has been particularly challenging due its broad nature and scope. Please let me know in case you run into any issues! If you see any glaring visual issues or bugs at this point it is quite likely that it is an accidental bug that needs immediate attention.

So please report any oddities! :)

Drunk On Nectar's Next Big Update!

With the solid foundation of recent patches now in place, it is finally time to usher in that exciting phase of setting a new milestone for the game!

There are many options to choose from, with the Monarch Butterfly reproduction being the most obvious and likely choice at this point. There are some ambitious plans brewing for this update, but more on that later :)

A recent Google poll (hosted on the game's Google Search page) has produced overwhelming and unanimous results in favor of "Butterfly Reproduction", so that one is going to be hard to ignore :)

In any case please do make your suggestions known in the meantime!

So it's time for a new adventure in the woods again! :)

(Developer of Drunk On Nectar - The Nature Simulator)