Gravitron is updated with another version. New level, options menu, updated graphics, tweaks and fixes. Check it out! 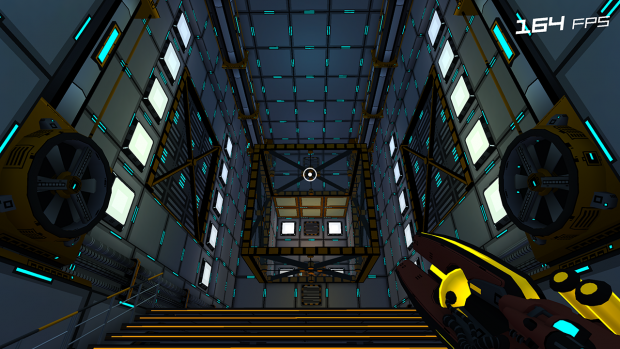 This (almost) weekly update. Now I'll be keeping this rhythm of more frequent updates until final release.Main features of this version are: new challenging level, options menu with adjustable mouse sensitivity as well as some tweaks and fixes.

As reported by users, mouse sensitivity was way too high, but it turns out it was broken!
Tip for Unity developers (in case you didn't know):
mouse movement is framerate-independent, multiplying it by Time.deltaTime makes it framerate-dependent. So if you have 200 fps mouse gets very sensitive, and vice versa.
Now mouse speed is not only fixed but also can be adjusted in options menu.

On some people videos there were broken colors, so this update has changed graphics (different color space). Tell me what you think of it now (if it have changed at all).

Now alpha has total of 5 levels + tutorial. This level will really need checkpoints... but you can try and beat it without them.

New features fixes and tweaks are coming, and I get more feedback from you, guys.
As usual feedback is as always welcome, so keep developer (me) aware of your problems and/or propositions.

I knew this moment will come, as 'Gravitron' is a name already taken by other game (as well as 'Gravity', 'Gravitation' and 'Gravi') I've decided to rename my project, and came up with some variants. This link leads you to my facebook poll, feel free to vote for a name you like best, or leave your version in comments section. VOTE!

I dont know if this is a coincidence, but your logo looks exactly the same as the czech gaming portal Gamepark.cz

Pure coincidence! But my is 45 degrees tilted =) Anyway logo will be probably changed, when game will be renamed.