In the previous episode of this article series, we introduced you to the routines and ceremonies conducting the marriages of the citizens of the Gamedecan poleis. Today, we take a look at the various holidays and celebrations kept in the Gamedecverse. Enjoy!

Posted by wojdylakrzysztof on Jul 21st, 2021 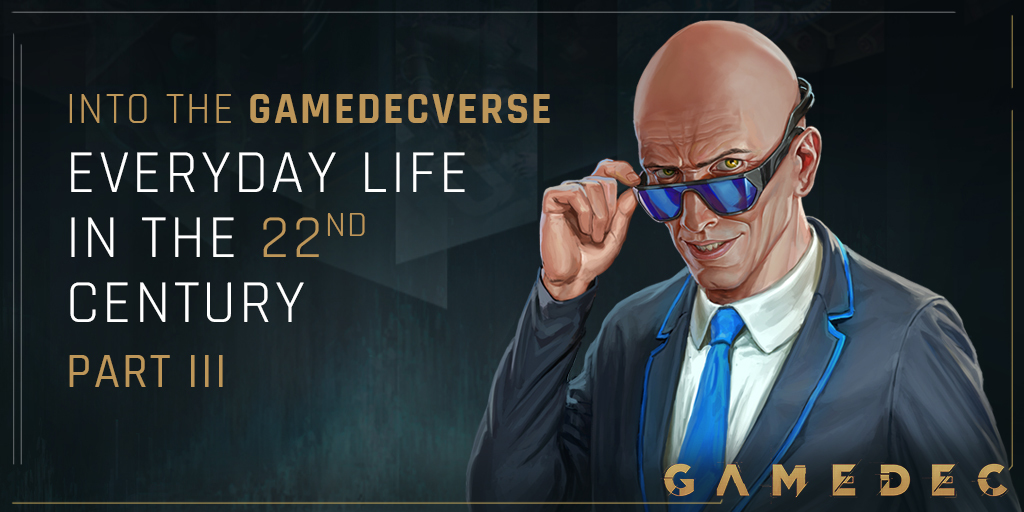 Giving Birth
In the Gamedecverse, people can be born in three ways:

By the forces of nature
That is, in the old, insidious way, where the forces of a child, mother, and blind chance fight for the survival of both the midwife and the newborn and that the baby is healthy. This is how the followers of old, orthodox religious denominations usually give birth.


By Caesarean section
The incision is small, the fetus is removed quickly and painlessly, there is no trace of suture because young mothers use "Scarstop." After removing from the uterus, the newborn baby undergoes a kind of delivery, namely, a particular machine (parturot) pushes the newborn through the birth canal, which presses the baby firmly from all sides, just as the birth canal does during natural childbirth. This creates the correct muscle tone (muscle tension). The babies do not have the urinary problems that babies had before the parturot era.


Extuter birth
This is still an exotic type of birth because the pregnancy is also different from what we see today. The exuter is an external artificial uterus, wavelike connected to the mother's body. Thanks to this, the fetus feels the mother's movements, hears her voice, feels her body, and the mother feels the baby in her belly, its movements, kicks, etc. The birth takes place in the presence of the family, and the mother waits right at the exit of the extuter for her baby, who undergoes a similar test of strength as in natural birth. The entire delivery proceeds as it would for a multiparous woman with a broad, "comfortable" pelvis. The fetus lands in the mother's embrace and immediately feels her warmth. The whole thing is filmed by the family. It would generally be a very joyful event if it were not for the groups of demonstrators who often gather in front of clinics with extuters. The demonstrators, usual followers of old religions, express their rebellion against the new kind of pregnancy (the so-called external pregnancy), claiming that it leads to the killing of the maternal instinct and, as a result, to the degeneration of humanity. In doing so, they ignore the fact that a mother with an external pregnancy receives an adequate dose of hormones before the birth of her child, thanks to which the breasts are ready for lactation. The body is flooded with oxytocin, or attachment hormone. An immediate, strong bond with the child is formed in the mother. 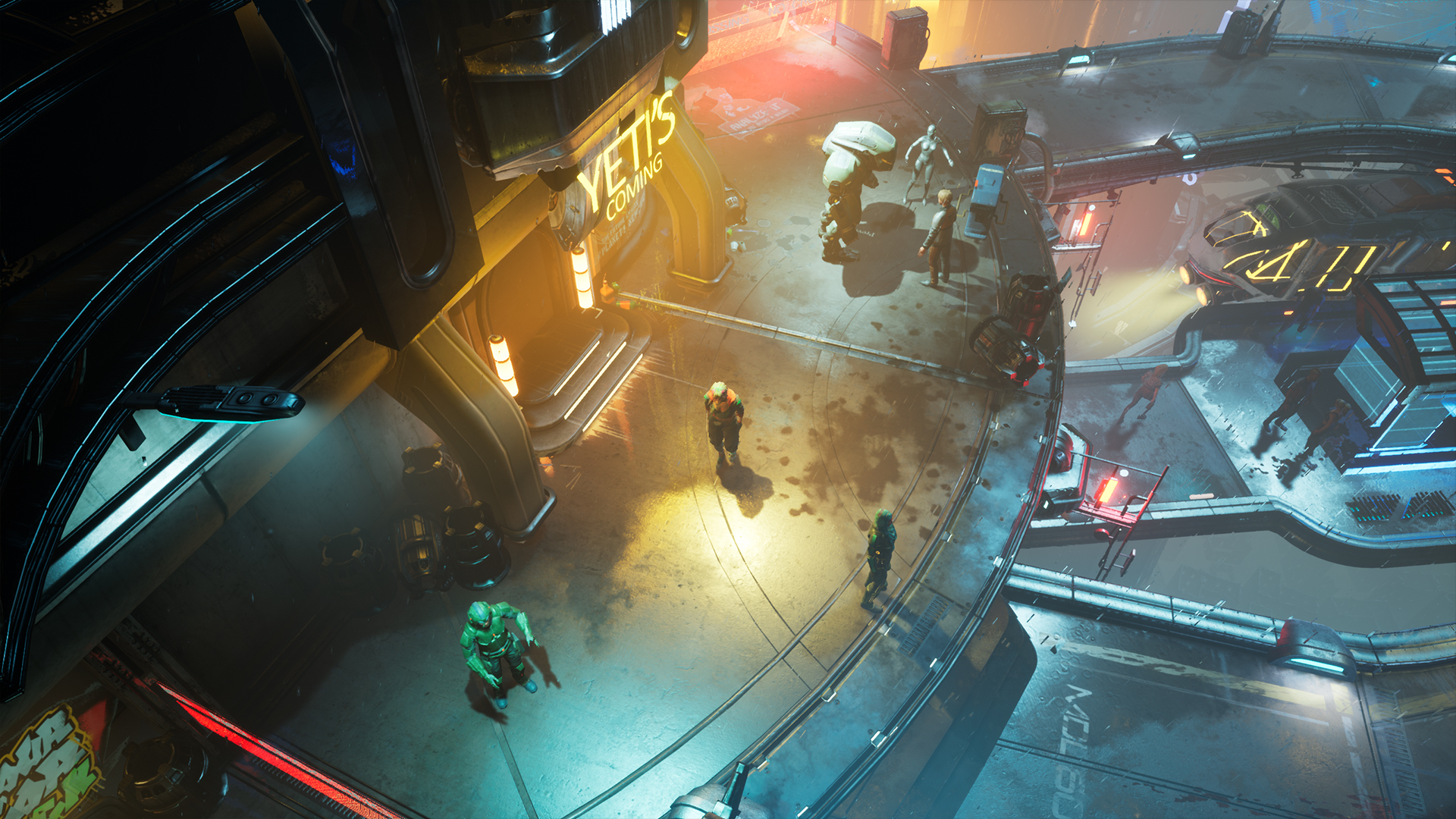 Birthdays
Birthdays are celebrated today, but one no longer wishes "100 years", as most people live to be 100 (one retires at age 70). Now one wishes "A planetary system to own," "A smooth beelbies," "Lots of Youngin and Youngout," "Quarters on Gaia," and so on.


Name day
Also being celebrated. There is a return to the celebration of name days. Celebrations like celebrations. Guests, drinks, swagger.


Network initiation
In many families, the first entry of a young person into a network is celebrated. The cut-off age recommended by doctors is seven, but as a rule, the web initiation takes place when boys and girls turn five.

Children experience their entry into the network very strongly.

Usually, after a visit to the virtual world that lasts several hours (always in the presence of an adult, usually in some network café), they go from the euphoria phase to the depression phase, feeling a strong need to enter the network again. This is a susceptible period, and psychologists insist that adults control the length of time kids spend in virtual spaces and block access to certain sites (such as the infamous "Twisted & Perverted" game).

As a rule, to reduce the urge to go online again, parents present the child with a cool, real-life toy, usually used for physical play. Recently, a trendy toy has been a jukebox. It is worth noting that online initiation facilitates the loosening of emotional ties with Chibot.

Zoenet Day - November 3
November 3. This is a fete in Brahma, during which huge parades are held featuring characters from many games. The parades in Brahma on the occasion of this festival cannot be compared with any other. On this day, the Brahma authorities allow unreal creatures to reside in this world, so no one should be surprised to see both spaceships and incredible animals next to each other. Fireworks take the shape of buildings, heroes, and monsters, and there are many illusions and projections. Whole towns in Brahma turn into amusement parks.


Neighbor's Day - first Saturday in May
An exciting holiday is Neighbor's Day, which is supposed to counteract the first cause of depression in Free Europe - loneliness. During this holiday, residents of a particular tower line the parking lots and air squares surrounding it, carrying refreshments, talking to each other, asking who is from which floor, what they do, etc. Holoprojectors, which participants mount on their shoulders, help to break the ice. Above the heads of the holiday participants, information can then be seen: "My name is Torkil Aymore, I live on the 324th floor, I'm a gamedec, I don't bite".


Thunderstorm Festival - First Saturday in July
Climates over the polis are moderated, and due to the destructive power of lightning, storms are not allowed. The festival of thunderstorms is no exception. Yes, a fair amount of nimbus (rain clouds) are gathered over the glade, but without storm potential. Lightning and thunderstorms are generated by special ilgens. They make such a powerful impression that experts on the subject unanimously claim that ordinary thunderstorms can hide next to the storms in Warsaw City. The festival takes place in the warmest month of the year, so it's normal for people to go out, dressed scantily, on airborne sidewalks and walking platforms, wait for the rain to wash over them, and enjoy the titanic lightning. As a rule, a lot of alcohol is drunk then, and it's easy to get pregnant too. 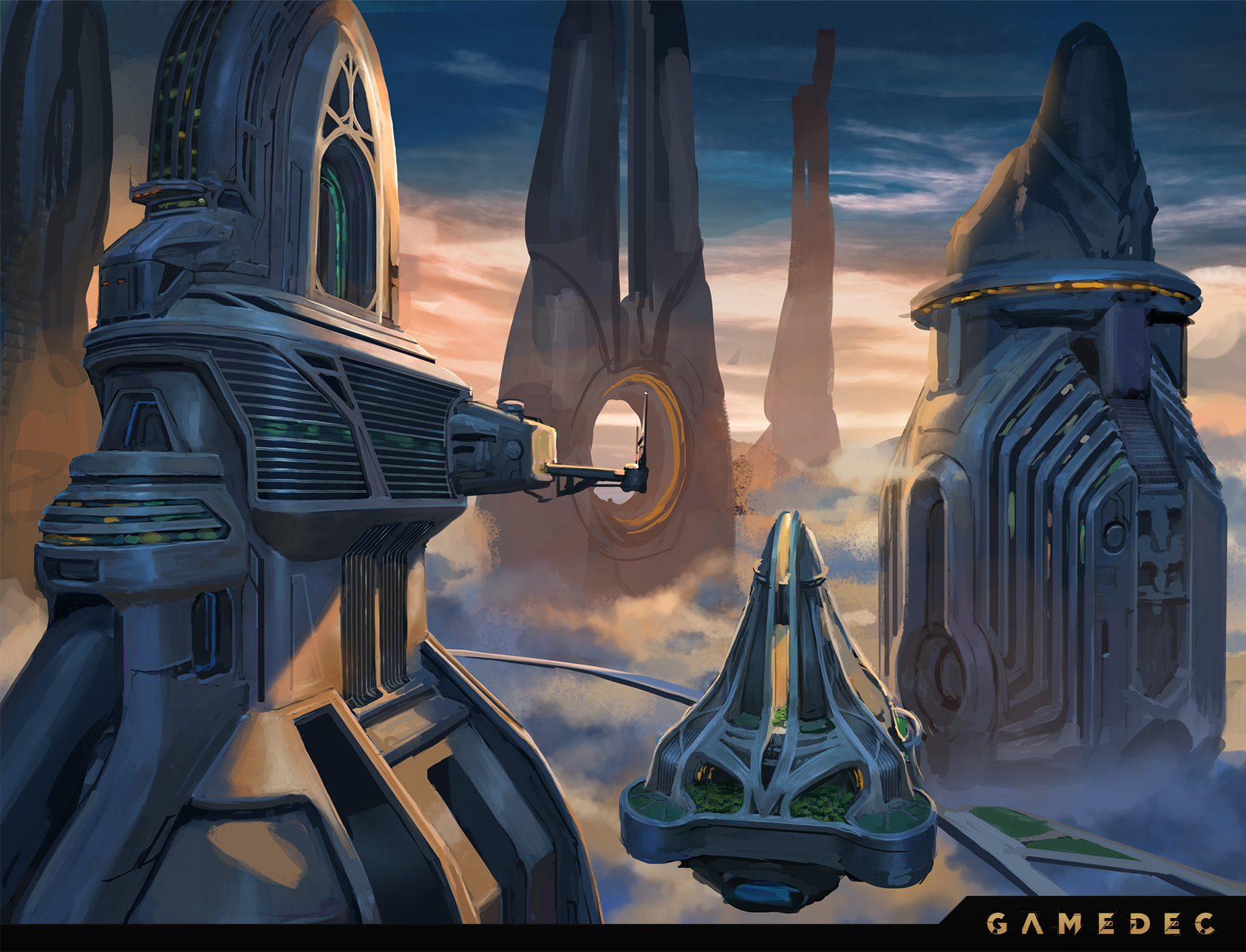 Warsaw City Day - September 1
The inhabitants of Warsaw City are overwhelmingly fond of this polis, so when September 1 comes, an important day for former Poles, they flock to the airways to celebrate. The main streets of the air are lined with aurocars dressed in a multitude of illusions and holoprojections, along with smaller walking platforms and other ships, all with decks on which dancers dance. Their enlarged silhouettes are projected above the lines of carts. The whole fiesta lasts a few hours, and afterward, drinks are half price in all Warsaw City venues. 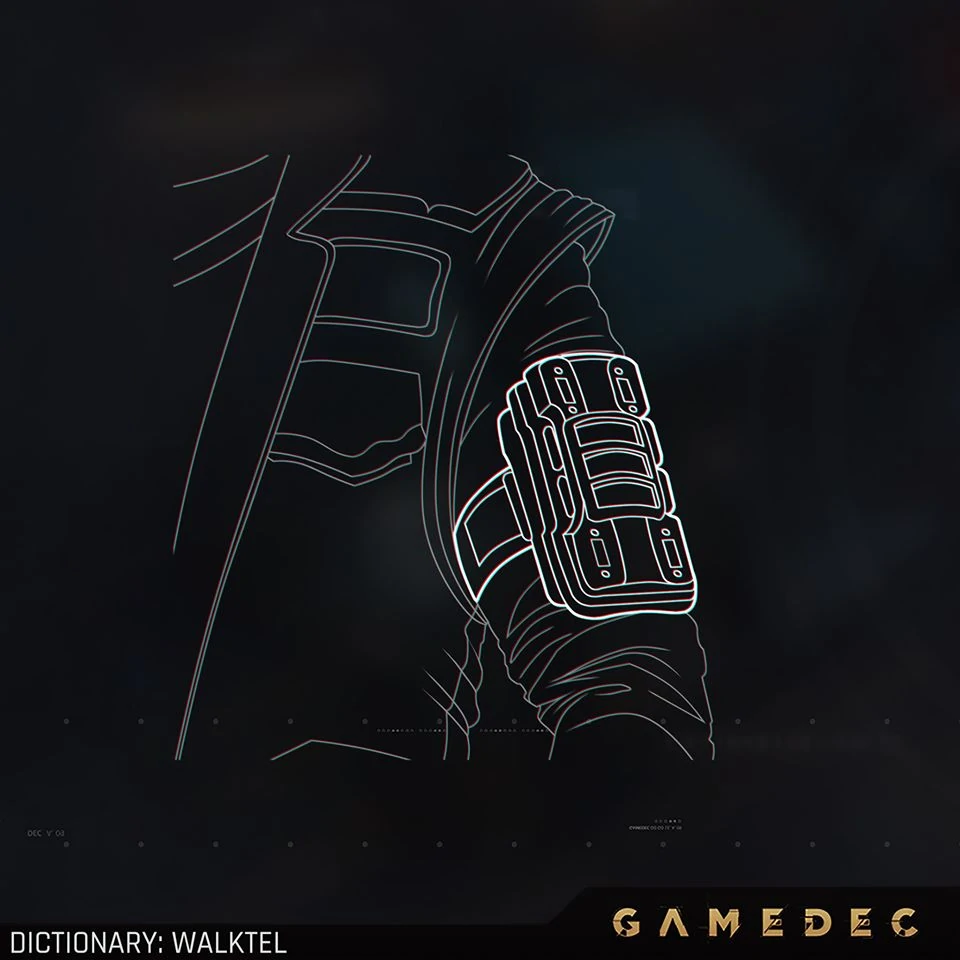 Walktel
It's always nice to get a new, more expensive model. Walktel is a portable device that performs all media functions. The screen is generated on the glasses synchronized with the device or (newer models) corner lenses, in which the transmitters stimulating the auditory, olfactory, and tactile centers (fingertips) are implanted.


Omnic
Gifts for the rich. It’s a wrist device, which performs any media functions. It is an upgraded, more modern equivalent of the older walktel.


Games
Mostly it's about a fee (semi-annual, annual) in some games, like Deep Past World. It belongs to a good tone to have constant access there.


Holms
If you buy someone a holm, it's only a virtual and interactive one, i.e., one where you influence the plot by making choices at critical moments. Imagine a 3D movie, where you are "in the middle" of it. You can watch it standing, sitting, or in VR. Holms are interactive - you can decide the main choices of heroes. It is impossible to see the whole holm at one seeing, as it is filmed by 360 degrees cameras.


ULM toys
ULM in the Gamedecverse is something of a Lego contemporary. Understanding Little Mind aims to not only entertain but to educate. This company's toys are always very complex and challenging. They often take on the appearance of apartment complexes, factories, or planets inhabited by communities of tiny robots.


Figures
Figurine and board games are thriving in an age of advanced aerial animation, advanced micromechanics, and electronics. Buyers of figurines and models in any scale can be found among adults and children (vide General Enrique Baczewski surrounded by World War I fighters fighting each other). The terrain boards for these games are richly animated and look remarkably realistic. The figures can move, fly, and fight. The games are either smooth or phased.

Even chess has been modified in games with an added random element (a pawn killed by a knight can win a duel in certain situations) and animation.

Chibots
Chibot is otherwise known as Child Bot. It is good for young parents to buy a droid to accompany their child's play and development. The best Chibots are made by ULM. The Chibot has numerous algorithms to stimulate the child's play, respond to the child's behavior, subtly reward desirable behavior and demotivate undesirable behavior. Chibots often look like plush toys: teddy bears, humanoid ducks, and hairy creatures with pleasant appearance. The child has something to cuddle with and someone to sleep with. Chibots have a permanent guarantee of safe use and durability (which is why they are pretty expensive). Their service technicians are never late with periodic inspections. Some parents trust these plush cuddly creatures so implicitly that they can neglect raising their kids, which psychologists criticize.

Although it is tough for a child to break ties with a Chibot, as a rule, network initiation helps a lot in this regard.


Jetboard
A jet board is a board with an advanced gyroscopic system that, if the user sets the options of this device, will prevent the child from falling over. The jet board allows flight at heights of up to one and a half meters, has an anti-collision system, and develops speeds of up to thirty kilometers per hour (it has speed limiters that can also be adjusted in the options). Together with jet boards are sold special modular shoes and overalls to protect critical parts of the body. In Warsaw City, there are unique trails for jet boarders, and if you want to really go wild, visit the Skate Park, where you can compete with the pros. If you want to practice online, play Skaters Chal.


Tours
A tour is always a good gift. Orbital tours organized by private companies with orbital propellers are within reach of almost every pocket. You can also take a trip to another continent, to another polis, or to a nature park in the Peeska Forest, where the ABB barrier system has been bent so that visitors can get an up-close look at dangerous species of flora and fauna.