Last time we presented an article about everyday life that covered Social Media, Privacy, and what a typical day of 22nd century Warsaw City looks like, and now, it's time for some fun stuff - weddings!

Posted by wojdylakrzysztof on Apr 21st, 2021

Last time we presented an article about everyday life that covered Social Media, Privacy, and what a typical day of 22nd century Warsaw City looks like, and now, it's time for some fun stuff - weddings!

We know that the cities are closed, and nature is dangerous, but modern problems come with current solutions. People play in sensory worlds, so a big no-brainer is that some would like to get married the same way. We've prepared a piece on that topic, so you can better understand the trends and customs of Gamedecverse. Enjoy! 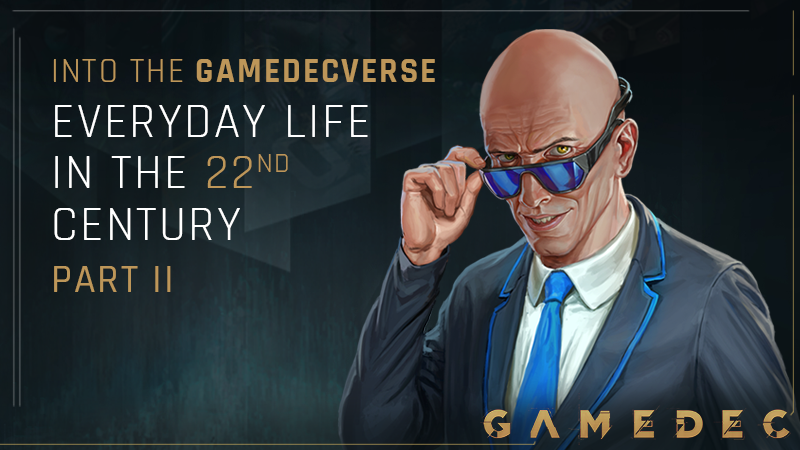 After the Pharma Nanolabs company introduced ways to overcome the limitations of brain and body to the market and humanity embarked on the fragrant road to immortality, questions began to be asked about the wisdom of "lifelong" weddings. Starting with celebrities, people began to return to the pagan custom of temporary marriages (e.g., for one year). But one step at a time: how do you get married in the GamedecVerse, and where do you spend your honeymoon? 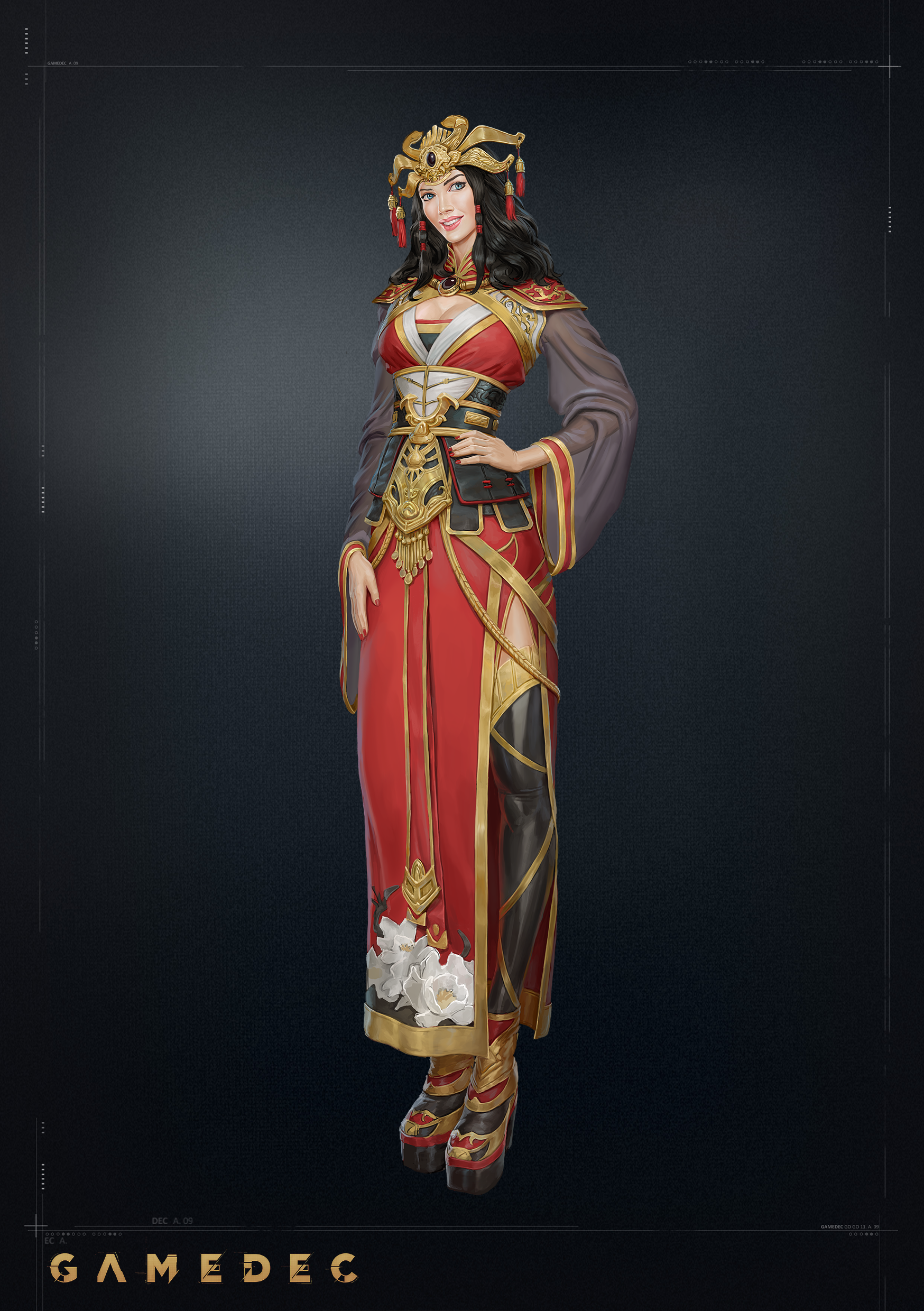 The cheapest and by far the most attractive in terms of spectacle. Guests don't have to leave or come anywhere because they sit in their apartments. They lie down on their beds. After a while, they are in a fairy-tale setting of a fairy-tale wedding. Only imagination sets the limits (although so does your wallet. Organizers of virtual weddings make you pay for every extra set of fireworks, decorations, rays, etc.). Wedding venues are usually located in extremely spectacular places: on hanging rocks, mountain tops, cosmic asteroids, and often these are dynamic (more expensive) locations: space stations speeding through flaming meteorites, basalt pillars rising to infinity, etc.

Guests hand "envelopes" to the bride and groom, which are automatic wire transfers to the newlyweds' account. After passing through a line of dragons / saluting giants / stargate-type rings, everyone sits down behind tables (sometimes these tables float in the air) and consumes unrealistic but delicious dishes. Then they get drunk and dance until they drop. Such a wedding can last for two and three days. It is recommended not to exceed this time because drinking and eating, although virtual dishes, over-stimulates the autonomic nervous system, promoting more intense work of the intestines and secretion of urine into the bladder.

The memories and pholos of such events are unforgettable, and those who attend cannot wonder why others choose weddings hooked on the real thing.

The moment of getting up from the bed can indeed be disappointing, but the custom is that the newlyweds lie on the bed next to each other (hence the tradition that if there is only one bed in the groom's or bride's place, another one should be bought before the wedding).

The most expensive and the most exclusive kind of wedding. If you want to show the world that you're rich and fabulous, throw your kid an "augmented" wedding. Your kid will love you, your friends will hate you (out of envy), and the world will comment. The rule for such a wedding is one: no guests are allowed without glasses/lenses, and everyone must have a program uploaded, [for example "Wendy & Jack Happy Wedding Day (It's today! Hooooray!)"] before leaving home and traveling to the wedding venue.

Weddings are generally held outdoors (in a regulated poly climate, there is no risk of rain, unless we're talking about a thunderstorm holiday), on wedding walking platforms (these are special platforms. Some of them - the cheapest - also run on regular days, but their layout is adapted to weddings and receptions). Dedicated Wedding Walking Platforms look like something taken out of a fairy tale: castles, palaces, as if flying fragments of amusement parks, but decorated relatively tastefully. For the time of the wedding, such a platform usually leaves the center of the polis and flies to the perimeter, outside the ring of ropes, to provide guests with more freedom and (relative) silence. Sometimes it flies far from the city, but this is rather when the newlyweds' parents have a lot of money.

During the ceremony, guests see the real thing, complete with virtual decorations (moving sculptures), colors (rays from the sky), sounds (heavenly choirs), and people/creatures (flying angels, birds, dragons, etc.). The guests themselves are also "decorated" virtually, according to the rules of the wedding so that they can be dressed in gold (although in reality, they are wearing other colors), they can have feathers stuck in their heads, colorful sheets, veils, etc. can follow them. Of course, the food at such receptions is real, which doesn't mean that its color or smell isn't augmented. The custom is that anyone of the uninvited guests who comes within 500 yards of the celebration is offered to upload a program so they can see the true splendor of the festival. In many cases, onlookers are blocked from shooting pholos of such an event, which is somewhat understandable. 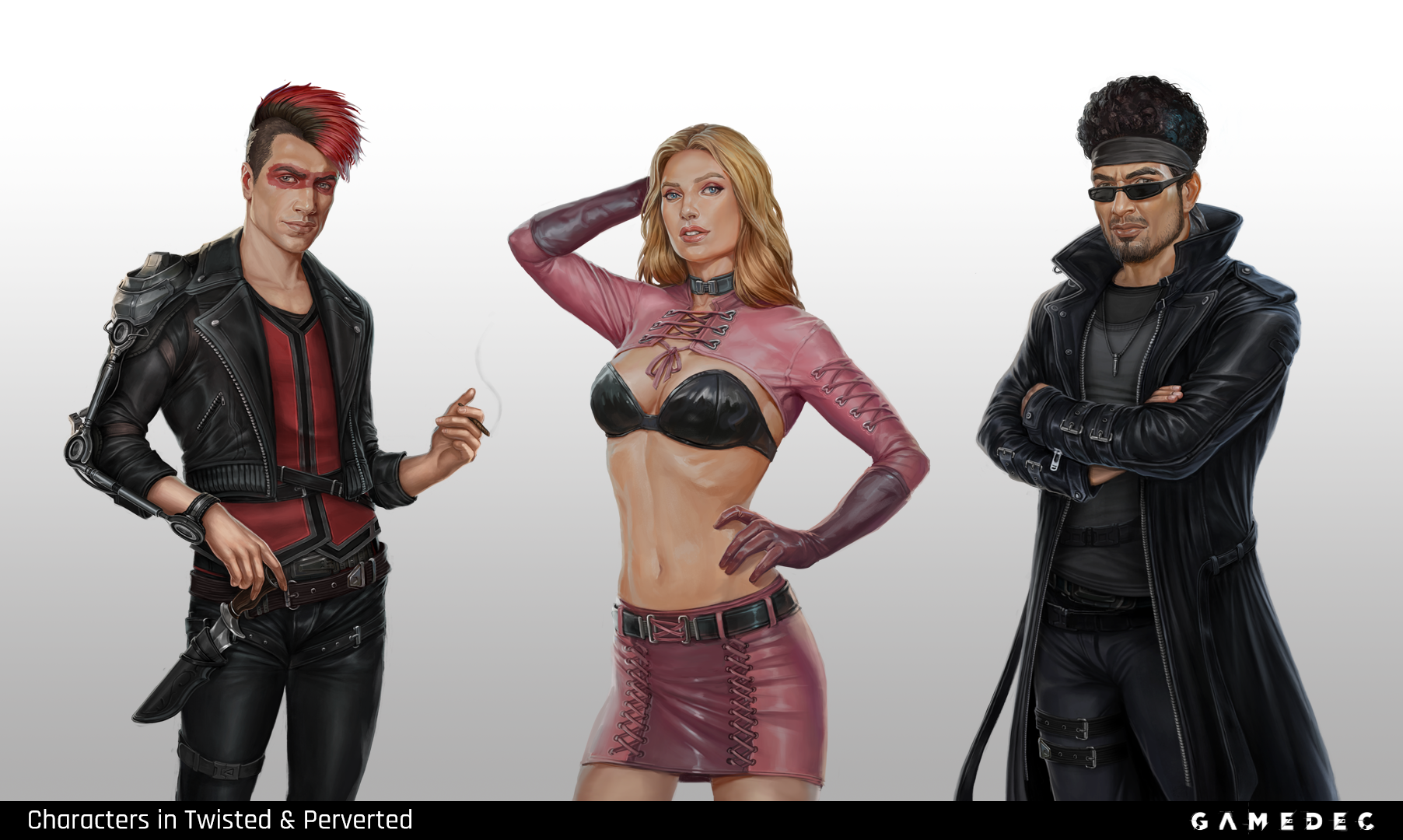 For snobs and connoisseurs of reality and for those who generally don't give a damn about anything.

How does it look? A celebration like today: a hotel for lovers somewhere within the anti-bios barriers, many of which are located on the perimeter of a glade just above the treetops, vodka, cucumber, borscht, and tartar. The place is decorated richly and tastefully with garlands. If you can afford it - a player playing on the omnichord (a virtual device that listens to the musician's intentions). Omnichord operator can create live music consisting of multiple soundtracks, where melody and harmony are arranged according to his intentions. If someone can't afford it, we recommend a digital muse. Okay, that was the inferior version of a no augmentation option.

For the snobs: the ceremonies are so sublime and sophisticated that regular mortals can only admire them on pholos in gossip magazines. Where are the palaces where the guests are entertained? Do they fly over Florida? Are they pummeling the waves of the Pacific? They probably do. Don't strain yourself looking for answers. This is the world of the biggest celebrities, and until you make your first ten million, you have no chance of joining their ranks. 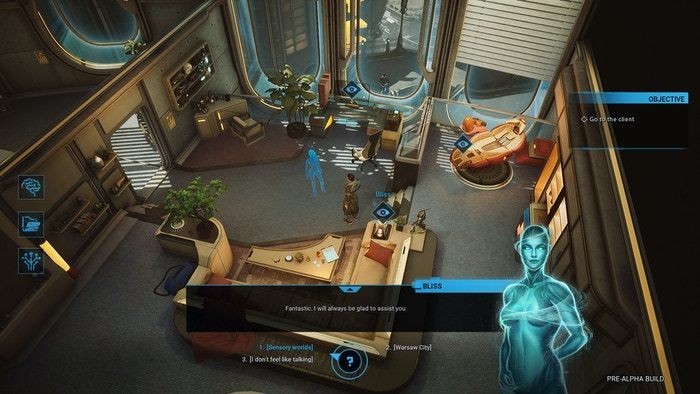 During these weddings, only the bride and groom and the priest are equipped with G-Pods. The other participants do not have these devices on their heads because an overly intense experience of the presence of Allah would draw their attention away from the bride and groom. On the other hand, the bride and groom feel very clearly that Allah / Yahweh / Christ / Buddha / Shiva / Brahma / Vishnu / Thor / Odin, etc., are participating in the marrying with the other person.

The most popular wedding night option is the "Low G night" offered by many specially designed hotels and suites that are always present near the wedding, whether the couple is getting married in real or virtual reality. The bride and groom indulge in the pleasures of the alcove in conditions of gravity lowered by half (sometimes more, sometimes less), often in augmented reality, assisted by specially created floating couches, supporting legs, loins, arms, whatever the lovers can think of. "SexCoach" couches have their own AI system, thanks to which they adjust themselves to the bodies of lovers, making the wedding night an unforgettable experience. So unforgettable that many couples decide to buy SexCoach permanently, and they are expensive. 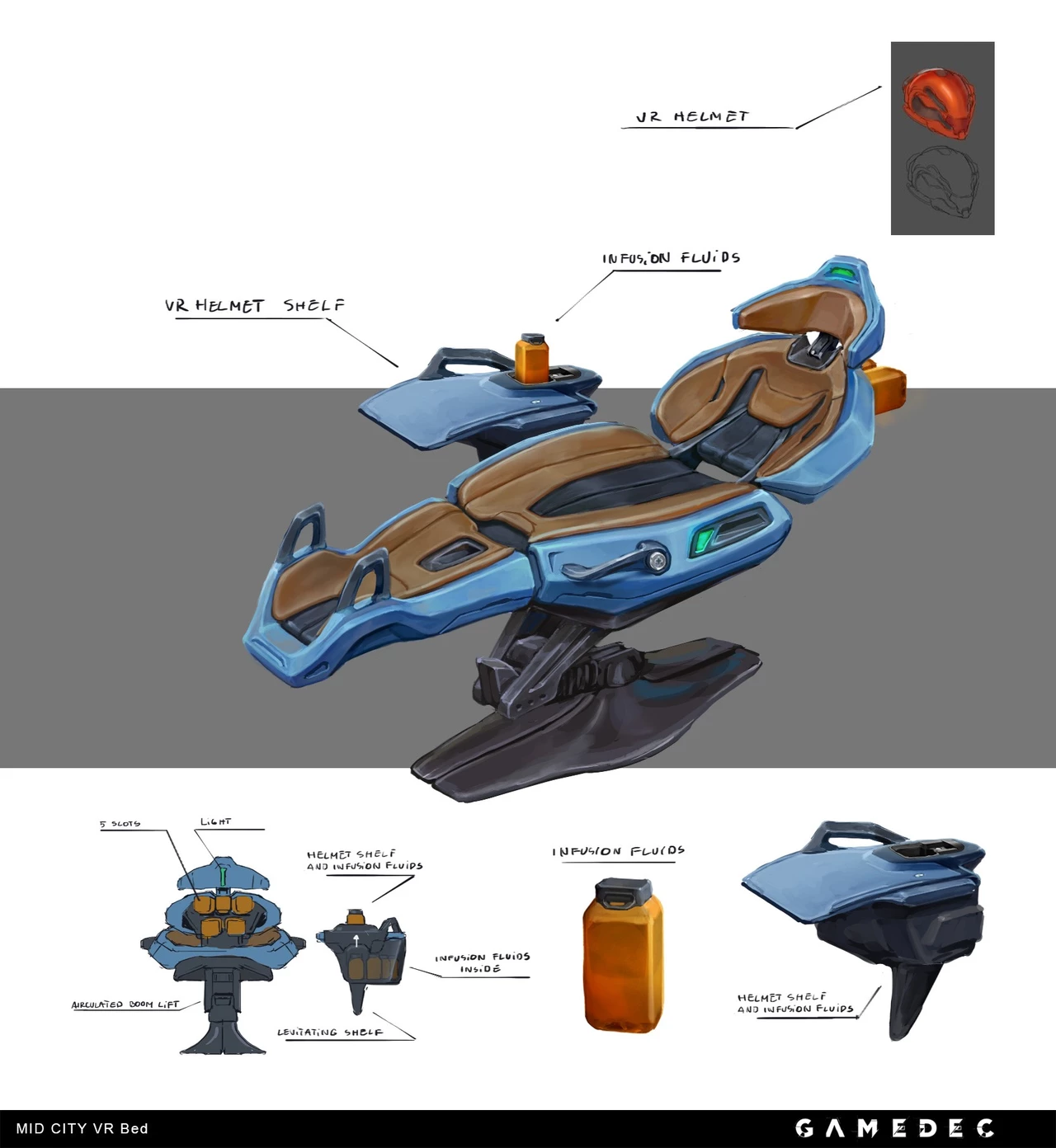 If the bride and groom who have had a virtual wedding decide to have virtual sex, they can choose their custom skins. What is worth remembering is that basic devitalization does not disable sexual function, so any emotions you might typically feel in the game will be transferred to realium. The rule is that after having virtual sex, the couple does not have actual sex because the cognitive shock could be too great (this is related to organophobia – one of the "gaming diseases"). Some couples make love for years only in the virtual environment.

The most exclusive option is going to the Moon. The most expensive is Mars. The most popular are other fields, and the tradition of newlyweds is to "fall" with the use of transgrav (heavy, gravity trains). As for the Free Europe area, the station in Paris is trendy. The couple visits the polis and then transgrav "falls" to the chosen exotic location, where they enjoy the time spent together.