Post news RSS A sneak-peek for the next Update

After 2 weeks of vacation, I am back and announcing some fundamental changes for the game like AI assistance for the player, support units and plans for the mutiplayer mode.

Some new and awesome stuff is coming for the next Pre-Alpha build, like a new unit class, a new AI to give players an optional assistance and what you overall information. Enjoy. ;)

Do you know about the EVA system of Command & Conquer games? The, in most cases anyway, female voice that informs you about newly produced units, attacked buildings ect? AIA is the short for Artificial Intelligence Assistance and an advanced idea of that concept. Sure you already noticed the female voice in Timeless War doing the exact same thing, do you? However, AIA will play a much more active role than the EVA in C&C games.

AIA is an optional AI system which you can activate or deactivate any time while ingame. You are a RTS noob and need some help? Or do you simply don't care about your base, but you don't want to discard the advantages a base comes with while playing solely with your Commander? Just activate your AIA and let the AI assist you. Technically the AI will acts like a medium leveled AI player, but whenever the actions of AIA would conflict with the players action, the player has priority over the AI.

The idea behind the system is to provide RTS beginners or Action-RPG players a system that assists their asset management while the player can focus on gameplay mechanics that suit their liking. Of course with AIA you are no match to professional players or AI opponents of the Godlike level, but you have a fair and confortable point to learned how the game is played or found your personal play-style.

A big chunk of the games mechanics is still not implemented, such as Support Units. As the class suggests, these units support your Army either with generated shields, cloaking and hiding spots or simply repairing damaged units in battle. 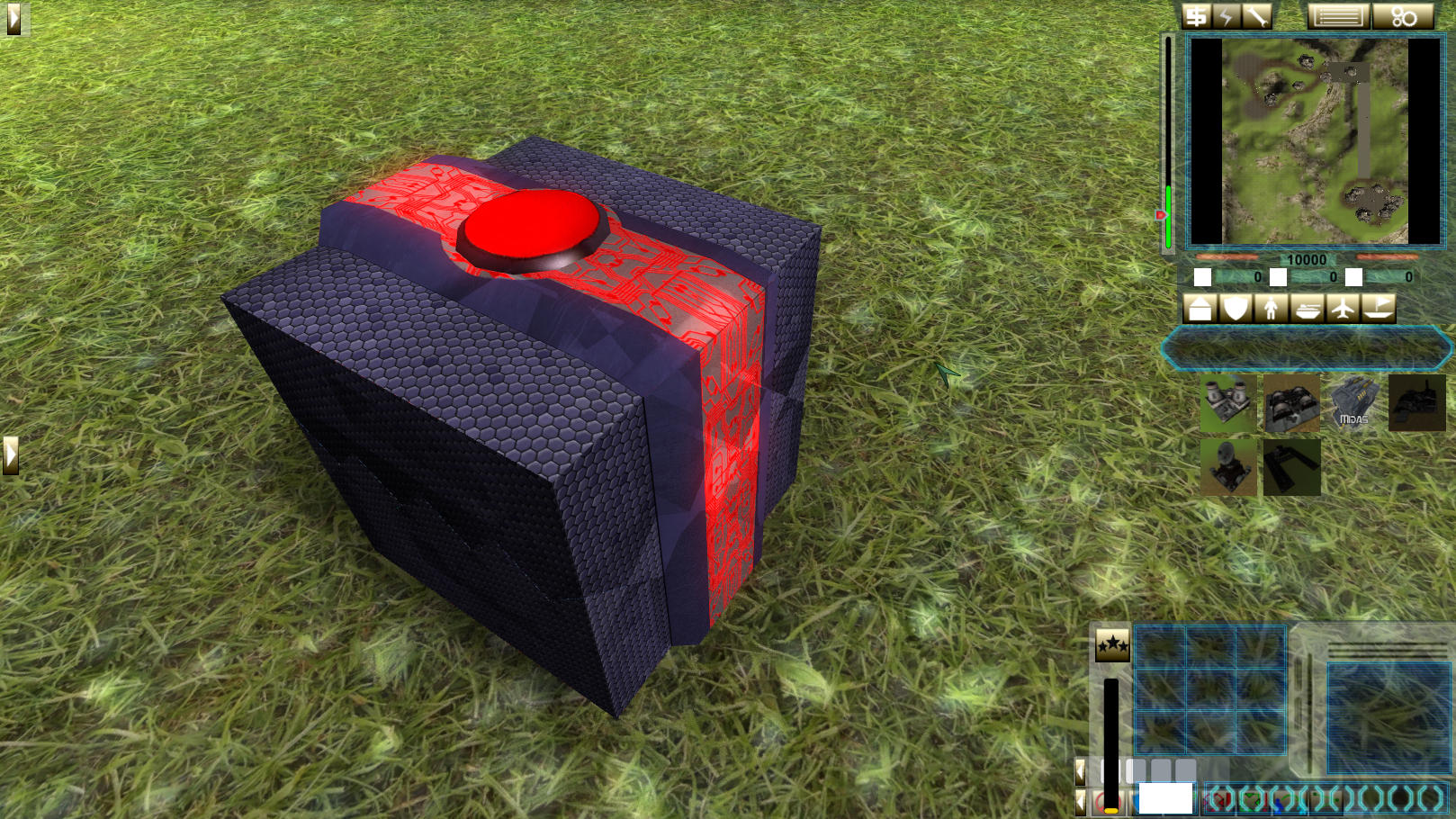 The Kubus is back and a vital asset if you play the Pandora Forces.

In Pre-Alpha 1.1.0 the game throws you directly into the battle and you can do before the action begins is closing the pause menu. This will change in the next build: the startup system will be improved and the main menu will be in a state where you can enter the Options, Single-Player and your Profile window as well as setting up and starting a skirmish game.

You may have noticed that there was no fog of war or shroud covering the map. I decided to drop fog of war because it doesn't fit well in the game. Instead there will be a cloaking system, that still allows the player and AI to sneak across the map and launch suprise attacks. I will try my best to finish create the system for the next update, but even though its an important part of the gameplay mechanics, its priority is minor compared to the other goals I have listed here. Nevertheless if it won't make it into this upcoming version of the game, the following build will have it for sure. After all, you can already unlock the cloaking attribute in the perk store, if you follow the tooltipis. :P

Multiplayer was a big subject during the 1 1/2 years the game was in development. I announced multiplayer a few times, but due to the lack of coding experience I wasn't able to properly implement a working multiplayer. After reading dozens of articles, I decided to change the system from a non-deterministic approach which would end up in heavily unsynchronized game states to a deterministic system - also know as Lockstep which is common among many games like RTS games. This might improve the performance in the process, but overall it will be a big peace of work to change the games logic.

All these changes need time. So please don't be disappointed if you won't hear from us for a while. I expect the next build until the last of May, but a delay is possible. You can also expect more specific information on the next update as well as a detailed change-log and much more.

Thank you guys for your patience. Stay tuned!