The Coin Game, a fun ticket redemption arcade game. The game offers realistic physics, goofy robots, open world design, a global ranking system and lots of silly prizes. The game includes 15+ modern inspired arcade machines and a pawn shop to keep money in your pocket. The Coin Game is made by a solo developer.

Some more improvements,new places to explore, a couple new gizmos and plenty more trash to dig through! 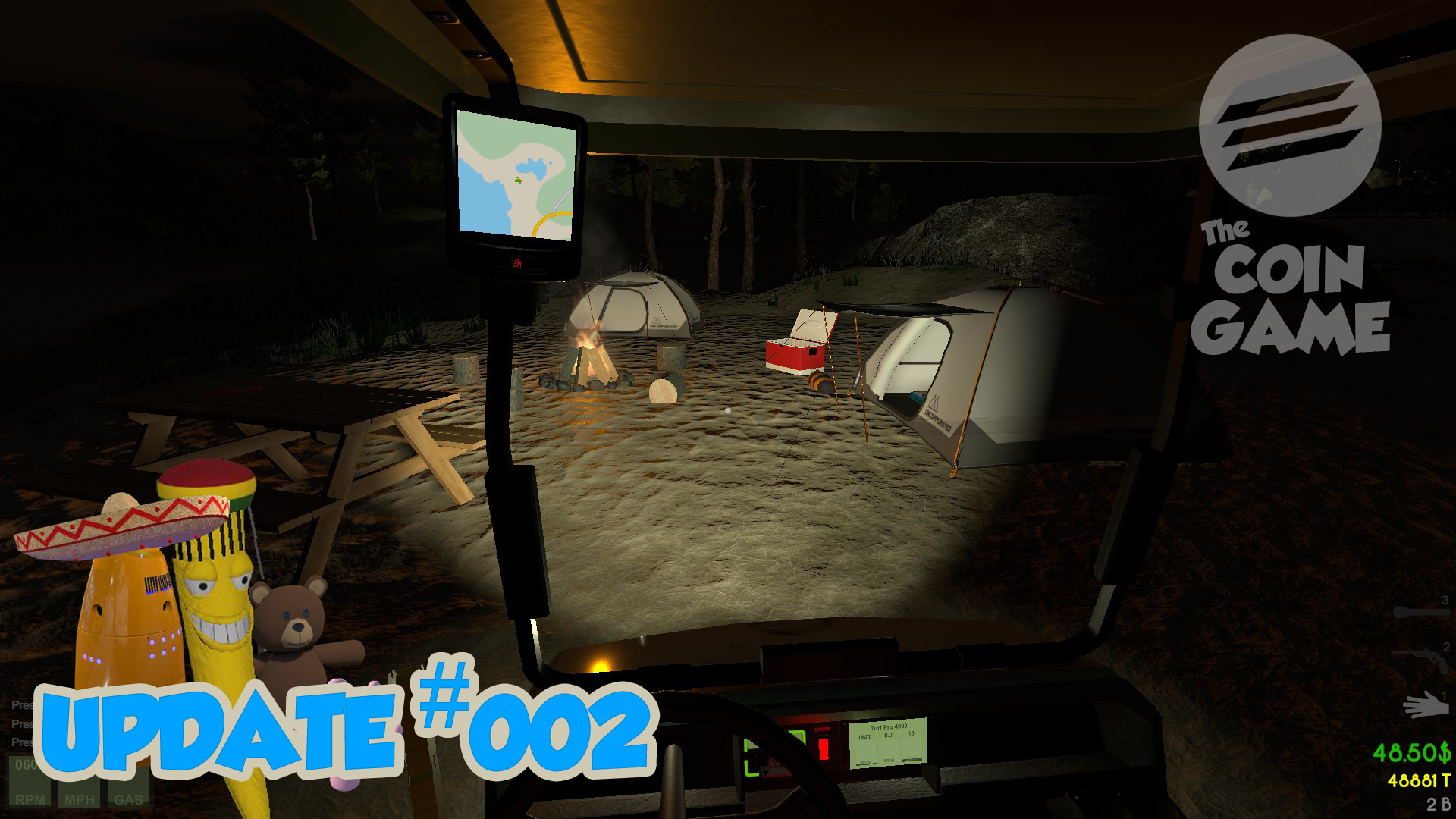 What's that? Trash you say? I know. It's not the best news you heard all week, but it is definitely fun to dig through.

This update brings some needed bug fixes, many optimizations, better on screen HUD and I have also built a few new things into the game to make some navigation easier. Uncle Phil had a GPS laying around the garage so he gave it to you. I installed it on the Golf Cart. I hooked it to the ignition so it will turn on automatically when you start the cart. It even has a Garage Door opener built into it. Read More in the updates list below to learn how to take full advantage of it.

I had a couple requests in the last few days and I also watched all the Youtubers playing for their first times. I tried to hit some of the small requests that they had and at the same time keep moving forward with bug fixing and the games overall polish. As with any update in Early Access there may be some bugs and we may break it.

I did not get into the leaderboards and the scoring system bugs too much on this update as I have been busy with more urgent things at this time. They will be coming soon. Thanks again and see you all in the next update.

I'm sure there is lots that I am forgetting as I did a ton of changes this time. Please report any bugs in the bug thread and I will get on them as quick as I can.

Thanks so much for supporting The Coin Game.

I have lots of surprises planned for you. ;)

INCLUDES:
- Added a check for DX11 which should hopefully help with the crashing on some Intel and AMD integrated cards.

- Removed a video shader that was crashing some other computers.... If it's not one thing... it's the other. ;)

- Turned the Golf Cart fire breathing engine noise down a little. Not everybody is a gearhead like me apparently.

- Upped the amount for completing a full paper route from $5.00 up to $12.00. Minimum wages talks by the locals were effective.

- Added a little color variation to those fidget spinners..... oh and I also nudged em a bit to the right so you don't have to spend your life savings trying to win one. 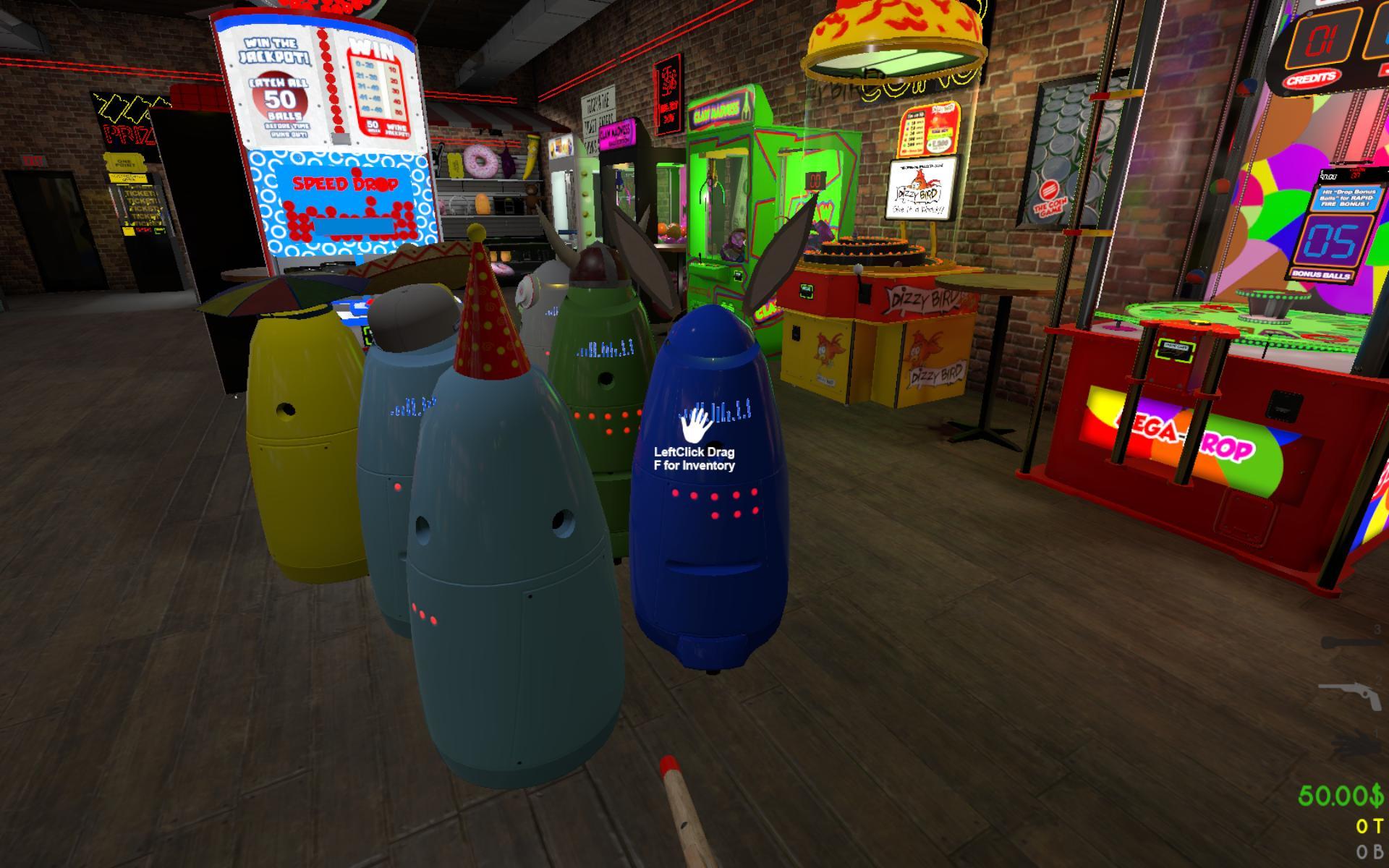 - Added an onscreen hud to show you which tool you are using. Flashlight, Rubber band Gun or Players card. bottom right of screen. Roll mouse wheel to change or 1,2,3 keys. (Left and Right D pad on Controller) 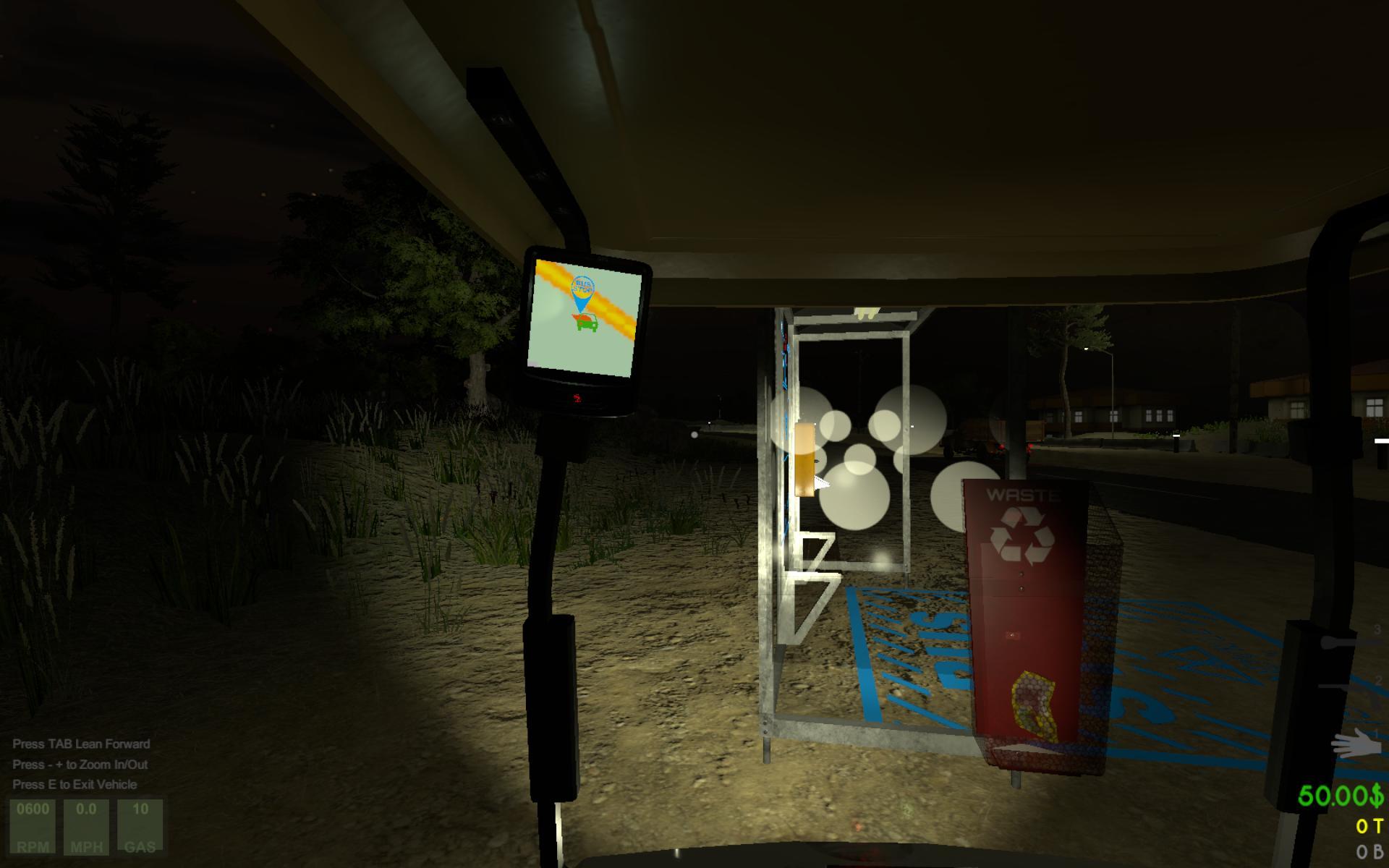 - Added a GPS system to the golf cart to see where you are going on the island. Uncle Phil had one laying around the garage. That dude has everything. I attached it to the golf cart for you. To lean forward and look at it up close you can just hit the Watch key or TAB when in the cart. Zoom in or Out with the center mouse wheel or the - and + Keys. 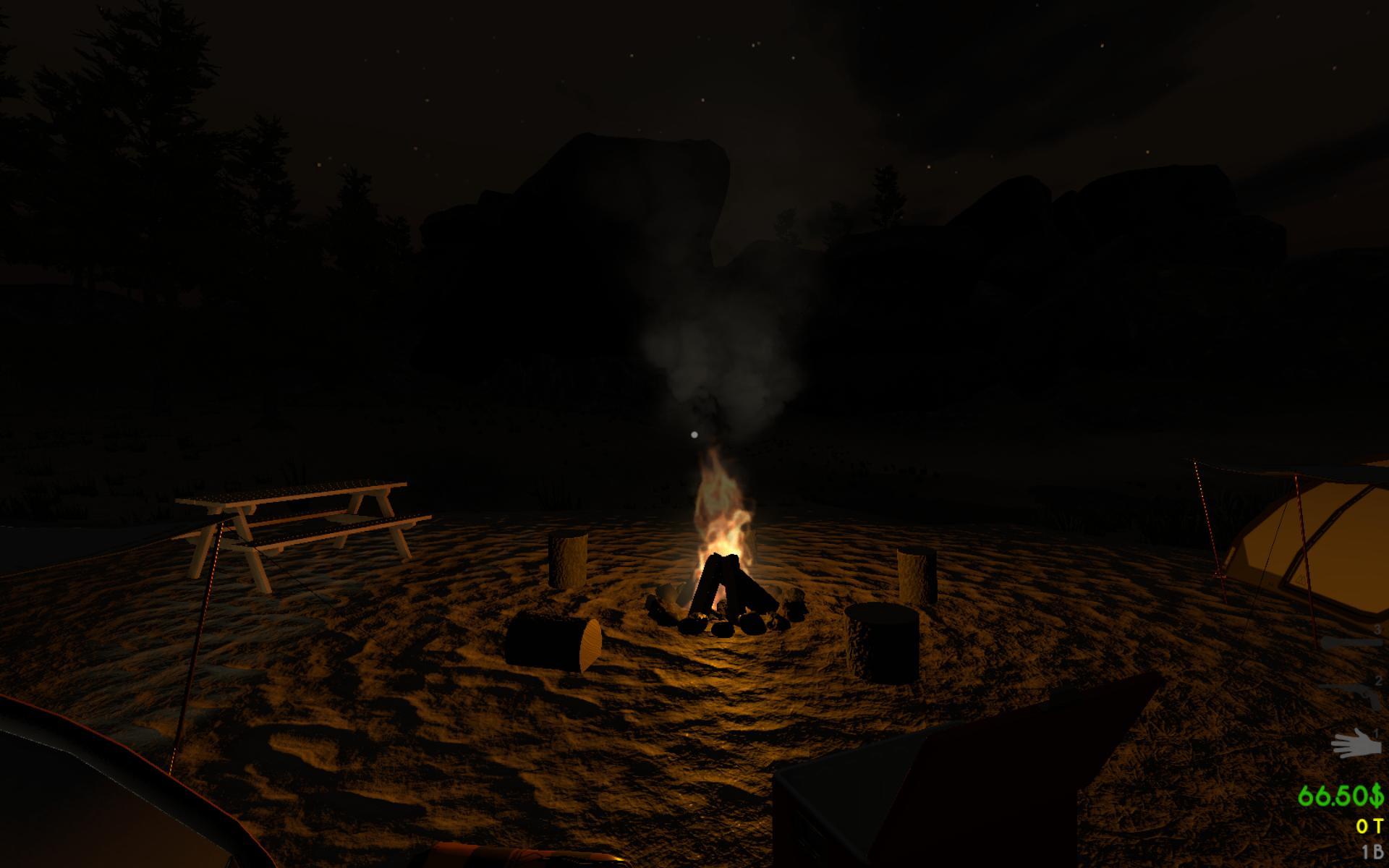 - Added a couple more areas for all you explorers out there. Both locations offer treasure of sorts. Cans mostly, maybe a scratch off or two. Those tourists campers on pier trails and the mountains can be dirty creatures. 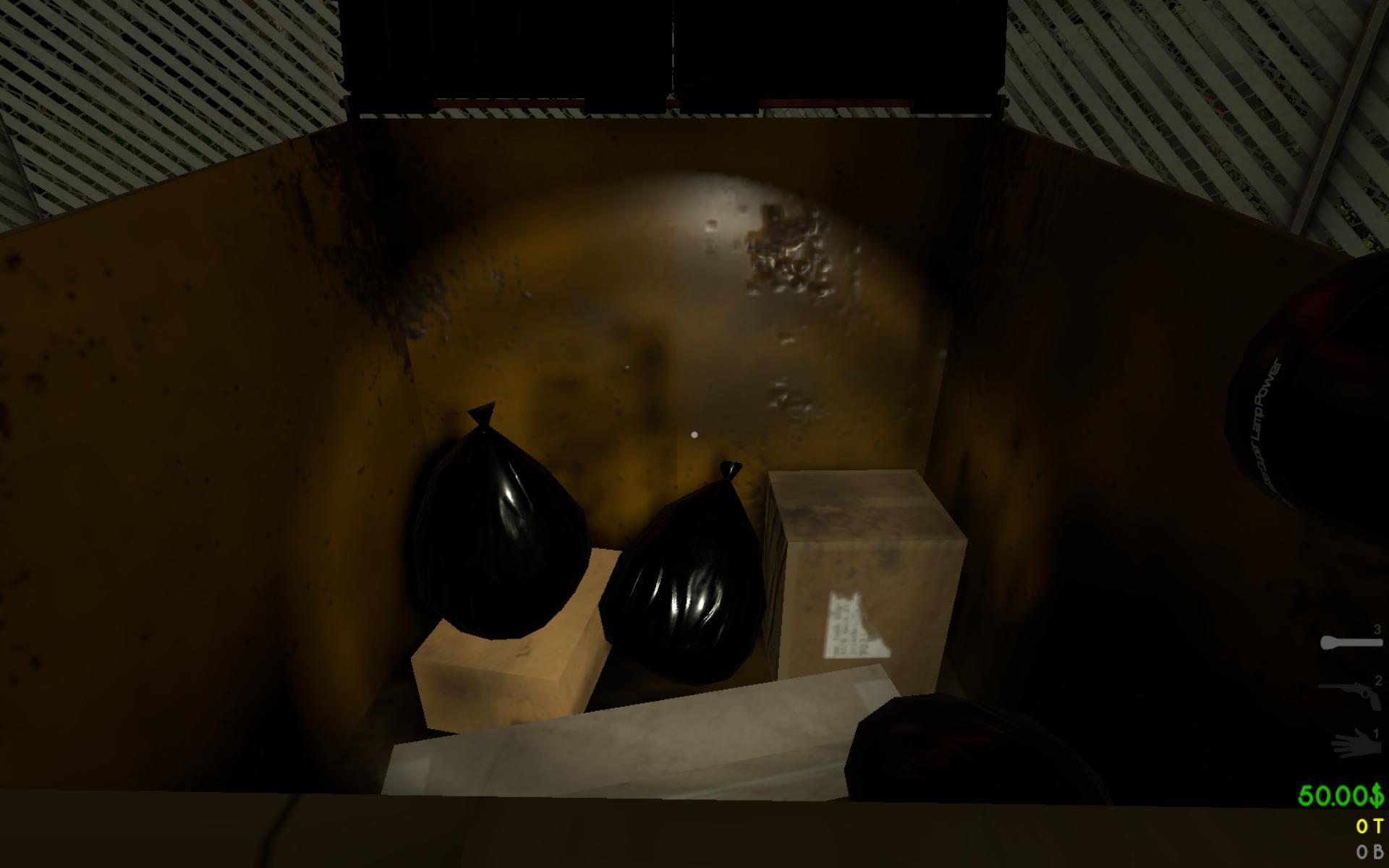 - Trash bags and boxes to make it less obvious and fun. Get scrounging! 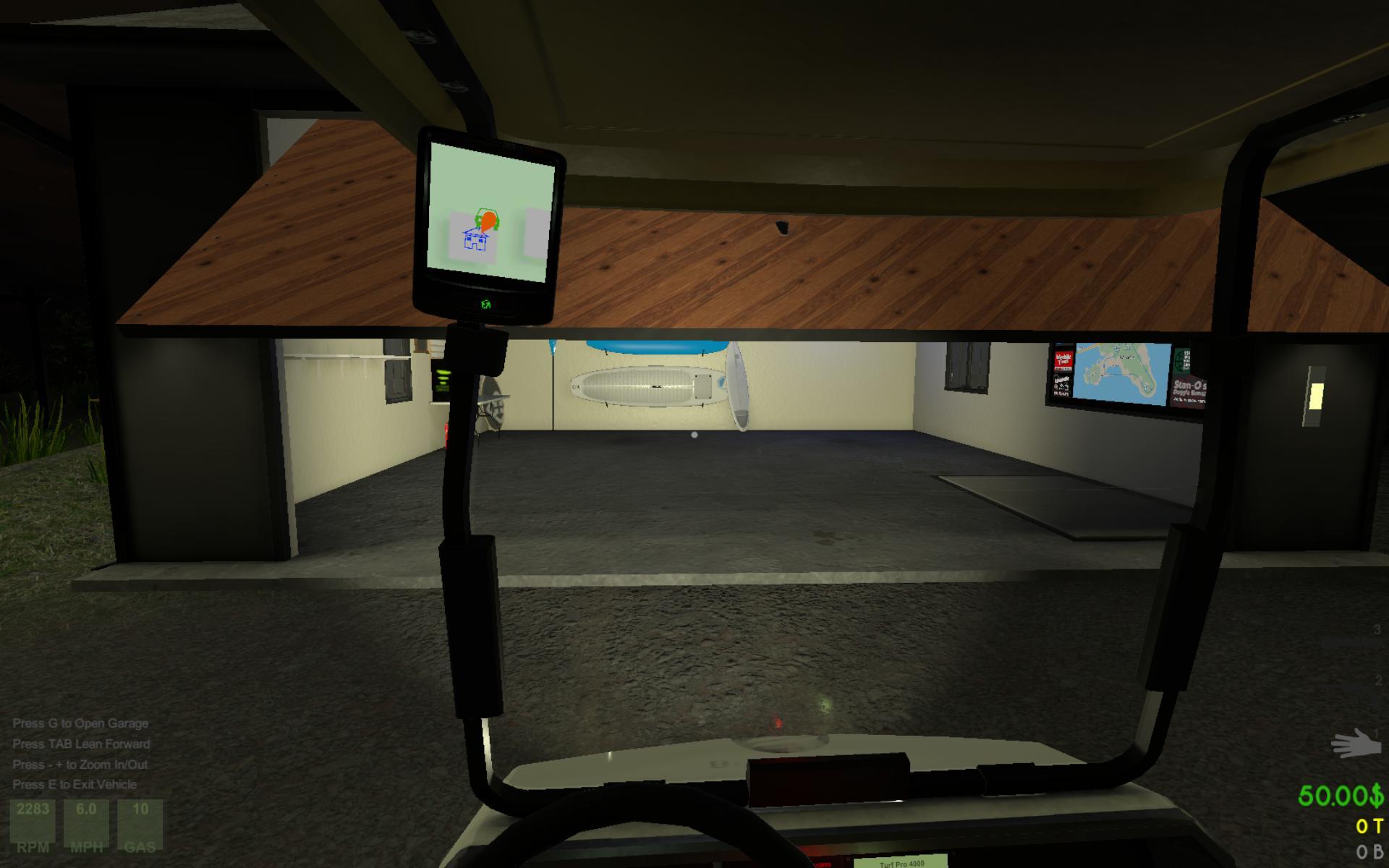 - Added an auto garage door opener to the golf cart but ONLY If you are within range of home. Now you can just hit the G Key or whatever button the "Garage Door Opener" action is mapped too on your controller. You will notice the small Green Home Light on the GPS will be lit when you can hit the Garage Door Opener (G Key). This will only work when in the golf cart.

- Added new colliders to the golf cart to stop the wheels getting eaten by the ground.

- Added a new check system to make sure that your spot to drop stuff from your inventory is not blocked by the golf cart or the prize recycler. Without this people were sending the golf cart into orbit and losing things while trying to put them in the pawn shop prize eater. Which in itself is pretty funny but is hard to find a ride home after the cart is gone. It will now prompt you on the bottom of the screen and also audibly just like when the inventory is full. You need to backup a bit and give the object some room to spawn in front of you. I am going to build this into all rooms in the future so you don't lose stuff in the walls but for now it is only on the golf cart and the prize eater at Barrys Pawn.

- Added a volume slider for all those little minions at Larry's. It's in the Audio Settings menu.

- Added hints to the cursors that tell new users how to use the inventory and consume items a little easier. Still lots of work to do on them but they will help the "Hey how do I pick this up" or "How do I eat this?" question until the tutorial scenes are completed.

- removed the ability to click on the players card machine when you are in the money blower. Some players would leave the money machine early by clicking on the card reader before the time was up and were losing serious loot.

- Fixed the black rubber flappy curtain things in the pawn shop prize eater that were not flapping too much on the conveyor belt. Turned flap up roughly 37% and now the skinned mesh renderers act normal and flap as expected.

- Changed the coin pushers to 30 credits per play now so you can have a little better chance at getting a bonus and don't have to put your players card in as many times. Thanks Vito for that one.

- Added some more shadows and took out a couple of the lights from machines to try to get a little more frame rate for the arcade. I am going to be optimizing all the locations once they are a little more cast in stone as things are always changing still.

- Fixed some bugs with loading items into the golf cart from your inventory and vice versa. When you put something into the golf cart it will put a temp hinge on it and when you go to put it back into your inventory the hinge was still connected and flinging the golf cart into space world. Duders got a heck of an arm though... Be careful when you are taking things out of the golf cart for now. Make sure to fully remove it from the golf cart before letting go of the mouse or controller button. Sometimes the Object can still stay connected to the cart and it can get wonky when there is a pile of rasta bananas hanging off the side of the cart. haha Its best to grab the item you want to remove from the cart and turn 90 degrees to remove it from the cart trigger box that fully surrounds the cart. This will get tweaked more in time. But for now ust be a little careful.

- Made the exiting of the cart a little quicker. Gotta make that paper route a little easier for ya. I see a lot of it in your future.

- Fix some of the Save and Game load features. Some of the saved games data may be lost. We are in early access still and we may lose more data as we change the amount of machines and locations.

Thanks for reading now let me know how it works!