This year was my first Global Game Jam that I attended in Pulse College. I was very lucky to be a part of a team of very talented people. The chemistry within the group was strong and after the first couple of hours we had our idea, plan and genre to begin building a conceptual puzzle game from this years theme - Ritual.

Our games title was Xibalba.

Xibalba is a dynamic puzzle adventure game, set in the chaotic depths of the Mayan spiritual underworld. In a race against time, you have to defeat gods

and your own fear to survive.

We choose this name as we were taking on the idea of Mayan mythology and sacrifice. This time period allowed us to have beautiful and unique concept art and graphics. Dark and colourful, the player has to make their way through the circular shaped maze which has three rotating circumference’s, centre, intermediate and outer, progressively growing more difficult as the player tries to reach the one of four arcs on the outer circumference which are the exits.

From a list of diversities given to all participants the team decided to choose 4 as follows:-

No retreat, no surrender!: The protagonist is unable to go anywhere but forward, in every situation.

Gandhi's Game: This game must have zero violence in its game play. Conflicts must have resolutions based on logic.

Loudmouth: All audio assets are created by sounds made with the mouth.

What made that sound?: Sounds are recorded from real life sources that are different to the objects they represent in-game (e.g. record an alarm bell for the sound of a phone ringing)

I began by writing down some ideas on what sounds we may need e.g. footsteps, soundscape, death, and music. Once I had the list it was a matter of what to record with the voice and how to design that sound to transform it into what I needed. When I found a quite room in the college I began recording

with a Zoom H6 and a Rode NT3 shotgun mic.

I firstly imported the audio files into Pro tools were I do all my editing and cut out unwanted room noise. From the audio suite I used one of my favourite tools Rx4 Connect. Rx4 connect allows me to import the audio file I’m working on at the moment directly into iZotope Rx4 audio restoration. I use Rx when an audio file which I want to keep has some unwanted noise like people talking in another room to the frequency hum from a computer or tv. 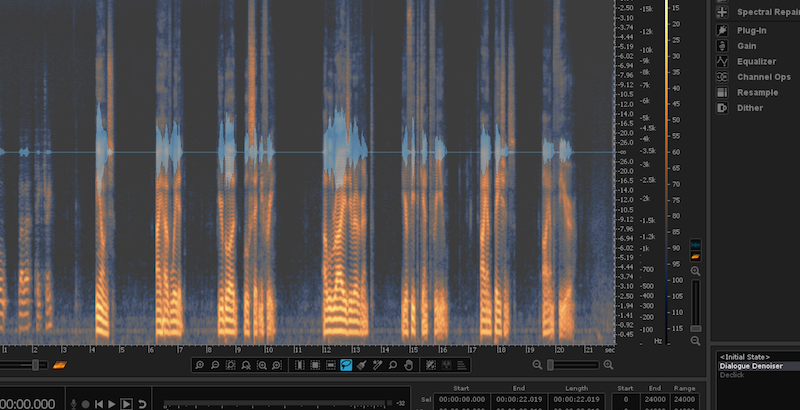 When the files were clean and ready to use I bounced them to a folder I named ‘ready for logic’. Everyone has their own workflow but all would agree it is very important to be attentive to the organisation of files. Things can get confusing really quickly with files lying aroun in different formats .wav, .mp3 and .ogg.

Some of the techniques and one of my favourite pieces I worked on was the soundscape.The audio for this was recorded when we where still brainstorming. I place a mic at the work station and recorded about 5 minutes or so of the conversation. I split the dialogue up into separate tracks and arranged them by our names. When I imported them to Logic I began compressing and stretching and reversing the files. I knew what i was looking for so just threw whatever came into mind at it keeping in mind we had a deadline of 48 hours.

For the wind sound I recorded the entire team individually either whistling or blowing air beside the mic. I gave everyone their own unique track and manipulated the audio with the time flex tool and space designer. 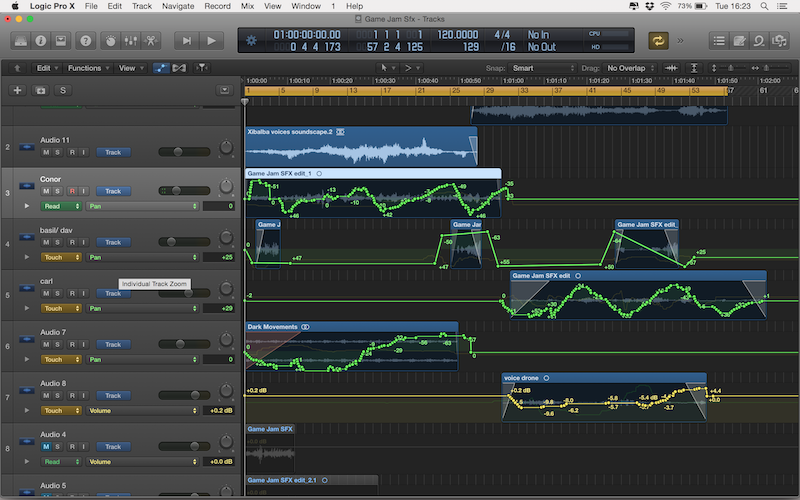 The Dialogue at the beginning of the game was written by Dave and I used Carl as the voice over because of his deep voice. After cleaning the file in Rx dialogue denoiser I imported it into Logic Pro x on an audio track. I wanted to create a haunting ghostly kind of VO. I first reversed the audio file and applied a large space reverb to it. I then bounced out the audio file and re-imported it. This gave me Carls VO reversed with reverb. I then reversed the file for a second time returning the audio to its original stat but now the reverb is swells the dialogue in before before he speaks. 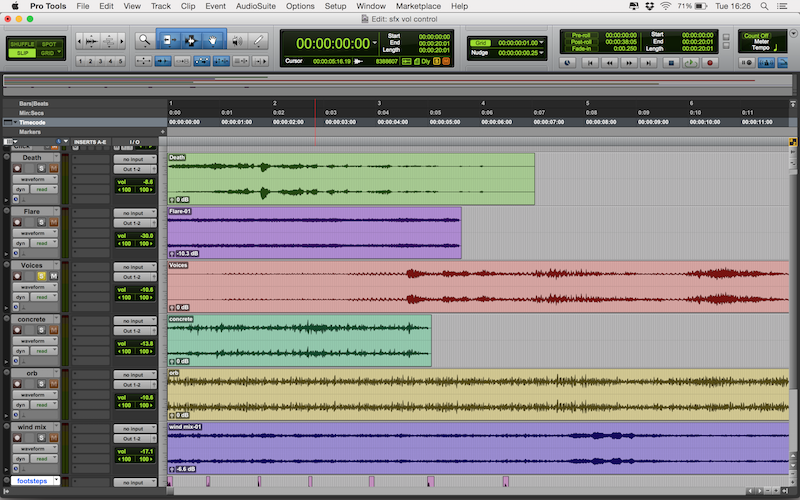 I had a great time at the Jam and had great admiration for my team mates as we all pulled together towards the end of an intense but fun weekend.

Please feel free to check out the soundscape from the link below.

After releasing our Xibalba v1.0 demo for feedback in the aftermath of the Global Gamejam, we have now iterated upon that release with a little bit more...

Cool guys. Felt a bit like going back in time to the gold old day´s. The felling in the game was nice. Was dark and lovely. Cool music.

I did not make it out but I did a commentary gameplay video here:

I took it for a spin, here are my thoughts!
Cool, it got intense with that big evil glowing ball coming after me, but at the same time, could be more going on in the level itself. Something as simple as a torch lighting up when you come near it or something. A bit more interaction!
The entire line renderer followed me when I was on the spinning platform, other than that it was nice! The intro image when zoomed in was very low-res, and some text was not aligned. Overall good!:D It was a fun theme this year!:D

Hi EnigeEchte, bug reports and any feedback would be greatly appreciated. Our most recent build is v1.1 and available to download right here on IndieDB.

Hey lads. Great game! Fair play lot done in only 48 hours! here is my playthrough of it! Youtube.com

I recorded my first impressions of Xibalba. Check out the video here: Youtube.com