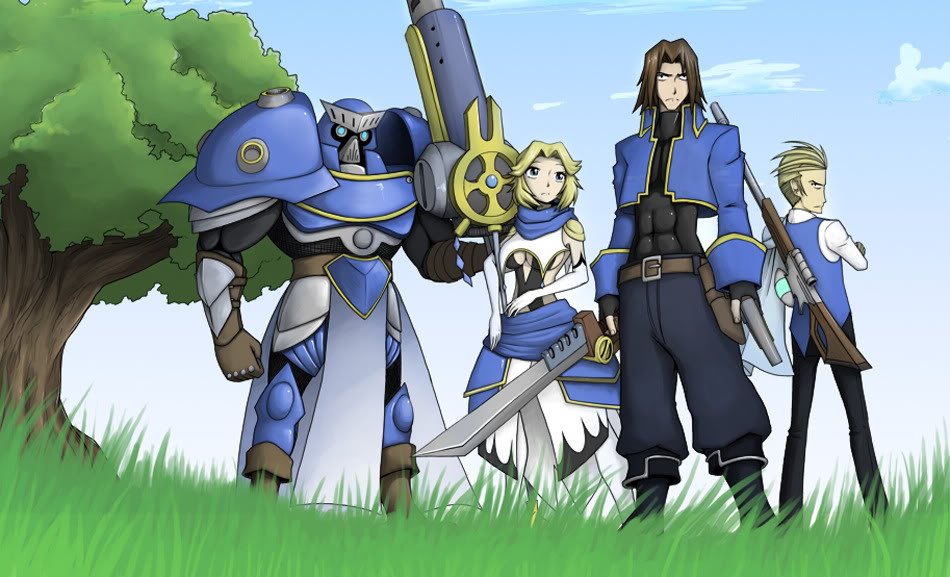 The first chapter of a new tactical role-playing game series, coming to the PC market Q1 2012.

Following the sudden resurgence of an adversary long forgotten, the powerful kingdom of Velisia is plunged into pandemonium. The Velisian Knights have been holding back the Azakari aggressors for years but are steadily losing the hold on their territories. One by one, they fall to an enemy with superior numbers and advanced technology. A small band of knights stands strong in the face of overwhelming odds, willing to give their lives to protect their ideals. However, when the misery of war begins to warp the very principles they fight for, the heroes start to question each other’s judgement and animosity begins to spread throughout the ranks.

Velisia: Swords and Magic against.... Robots?!

"Velisia: A Traitor's Legacy" is the first chapter of a new tactical role-playing game series, coming to PC Q1 2012. To keep up to date with the progress of the project please add yourself as a watcher in the side bar or follow us on twitter @TeamCraftGames.

Learn about the backstory behind Velisia: A Traitors Legacy.

The last of the Velisian Hero previews, details of Luthers backstory and his abilities.

Take a sneek peek at the story behind Lilah Brightmore and read about the abilities available to the Velisian Healer hero archtype.

A quick preview of some of the areas of the world of Tarn that will feature in Velisia: A Traitors Legacy.

This program will stitch together a collection of .png renders of a character to create a sprite sheet for use in XNA. "Honey Badger" Sprite Sheet Stitcher...

This program will stitch together a collection of .png renders of a character to create a sprite sheet for use in XNA. "Honey Badger" Sprite Sheet Stitcher...

It has been a while since we heard anything, so what's up?

How exactly are custom built engines "built"? Are there programs available for such tasks, or is it a matter of coding?

In laymans terms theres a number of ways to build an engine but they all generally do involve coding if you want it to do anything exciting or differant.

You can use engines like Unity that have alot of the work on the engine/editor already done for you, but its still extremely editable and can be used to make practically any game or you can create your own engine from the ground up which is what we have done. Engines around 10,000 lines of code and the editors a little more I am told, in hind sight it was a massive project for a team with one programmer.

What led to the decision to build your own engine?
How many years/months did it take?
Just read your comment.

Hi yarow12,
When we started making Velisia, we were still university students on a Computer and Video Games course. One of the modules of the course was Programming; our programmer, Matt, started to explore various engines and found that it would be best for the type of game we were making, to create our own engine.
The engine is actually written in XNA (C#) and has taken almost 3 years to reach a stable state. We are happy with the way the engine works but we would recommend to developers with small teams like ours (6 members/ 1 programmer) to try one of the many excellent engines already available to indie developers.
Unity allows developers to create games for free with a free version of their engine until such time they receive a pre-determined amount of cash from sales.
The UDK is another excellent engine that has a similar free until you earn style policy.
There are lots more engines, and lots of tutorials; the decision on what to use basically comes down to what type of game you want to make.

This game looks very cool and right up my alley as far as style.
Is it possible to localize the game BTW? Or is it made in an editor that makes the process difficult?

I represent a project called PLAYISM(www.playism.jp) and I think Japanese gamers would really dig this title. :D

I'd have to check with my programmer to be 100% certain but i'm pretty sure localized versions of the client are quite achieveable with some time and effort.

Alright very cool! Would it be best to get in contact with Merge Games I suppose?

Really looking forward to playing this one! :D

So who is going to be our 100th Watcher!