Can you push back against fate, live among ruthless gangs and fight back the zombie horde, with just a handful of ragtag militias to help you?

Starting as an amnesic survivor, rescued half dead by the kind people of Urban city shelter, somewhere in backwater south of USA, you need to raise up and become a true leader, rebuild the pillaged camp and bring hope back in the hearts of the survivors. Then venture out to negotiate alliances with ruthless factions or go to war against them. And finally, bet everything you have and know to survive an impending return of the massive zombie horde that almost ended civilization just two years before.

We know how important it is for the player to immerse into the game world and how much the portraits of your team and your avatar matter in this respect. So we’ve implemented a system of layers under the character blueprints that saves your choices in the shape of a portrait when you create your avatar’s 3d model, including sex, face type, skin color, haircut and choice of clothing with their respective colors. Of course the system can be expanded to regular NPC actors too (those you interact and have a dialogue with), allowing modders to create a lot of variations, using just one 3d body mesh and collection of easy-to-make 2D layers.

Since we were working on the immersion factor, we took a look at all the NPC actor portraits and upgraded them to more refined, hand-painted versions (initial heads were just renders of the 3d mesh). Now they will fit the story, their intended role and background and will be even more lovable (I mean just look how redneck cute Billy Bo is, don’t you want to take him home?).

We have talked about spawners a lot, we know. We are quite excited about this update because it is quite transformative for the gameplay. Today we’ll show you the smallest Prologue spawner in action (bus zombie herd). What you’re seeing is basically just one small wave of zombies, awakened from the pile of slumbering dead hidden in the bus. If you keep making a racket, more raise up until the spawner is destroyed (by fire) or emptied (herd total depends on the difficulty level and zone). If you played last year’s demo and felt the zombies were a walkover, this is another universe now. Approach even the smallest herd foolishly and you’ll get your team swimming in more “friends” than a stage diver at a rock concert.

The sawed off hunting shotgun with a 2 shot mechanism has been ready since the demo, but somehow didn’t make it into that build. In the new game prologue we’ve restructured both the loot found and the equipment of the early enemies. We’ve found this vintage hunting shotgun, in its sawed off version, to be a perfect starter weapon, together with the redneck crossbow and the nailgun. Since the scavengers you’re encountering don’t exactly have access to a weapons trader, you’ll find out they’ve resorted to crafting their own ammo, grandpa style, using packing paper or cardboard, gunpowder and some nails. You won’t hit a flying pigeon with this setup and from range those nails will go everywhere, but get up close and they’re suddenly a handful of deadly metal pieces spewed out of a shotgun.
Also this homemade recipe of nail shots will fill in the gap nicely until you get your shelter's ammo press working or access to a stable supply of “regular” munitions. Nails are everywhere, cardboard too, you just got to be a bit lucky scoring some gunpowder. You can laugh at uncle Jim Bob’s recipe, but when that zombie is in your face you’ll thank him! 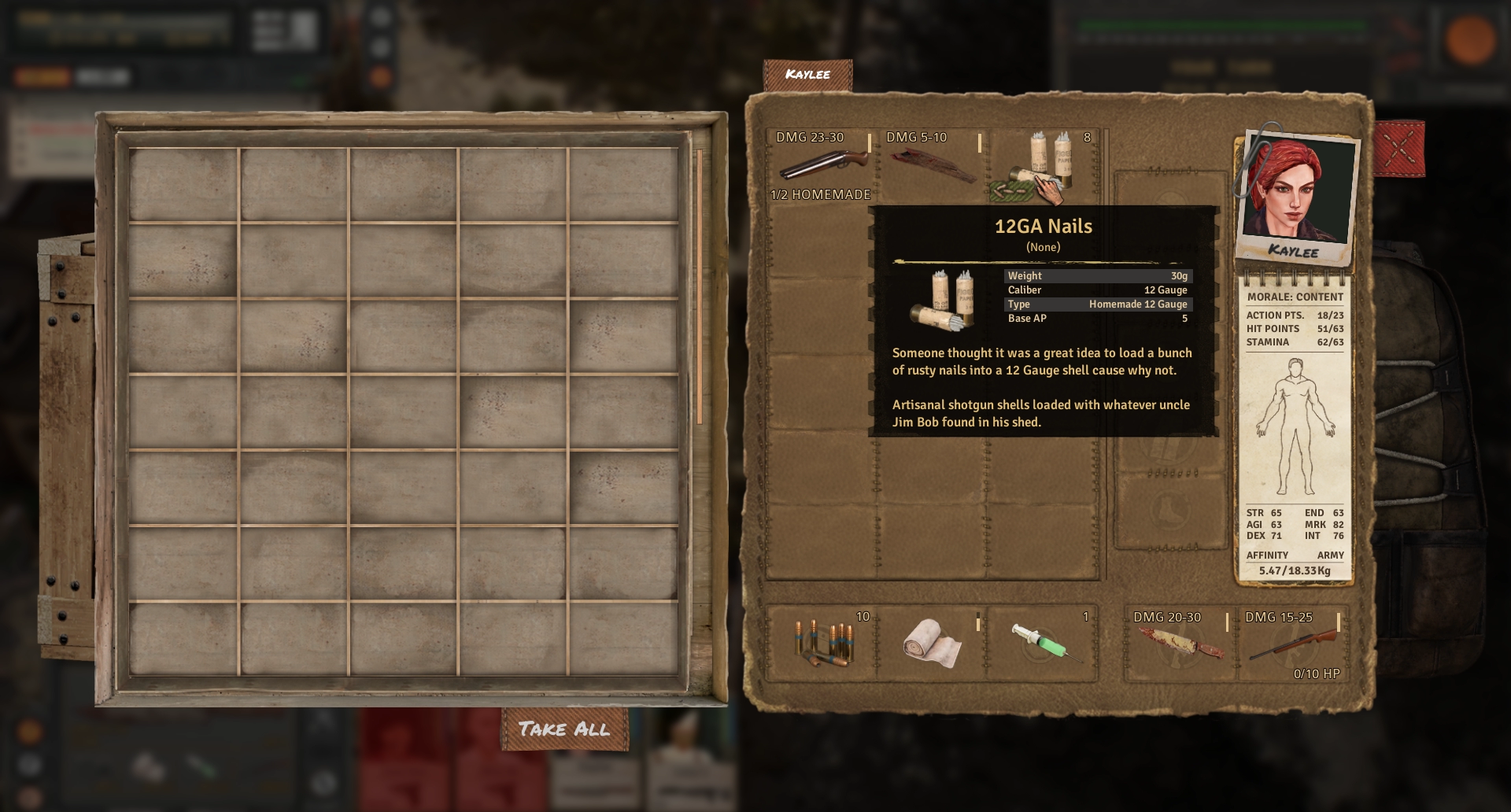 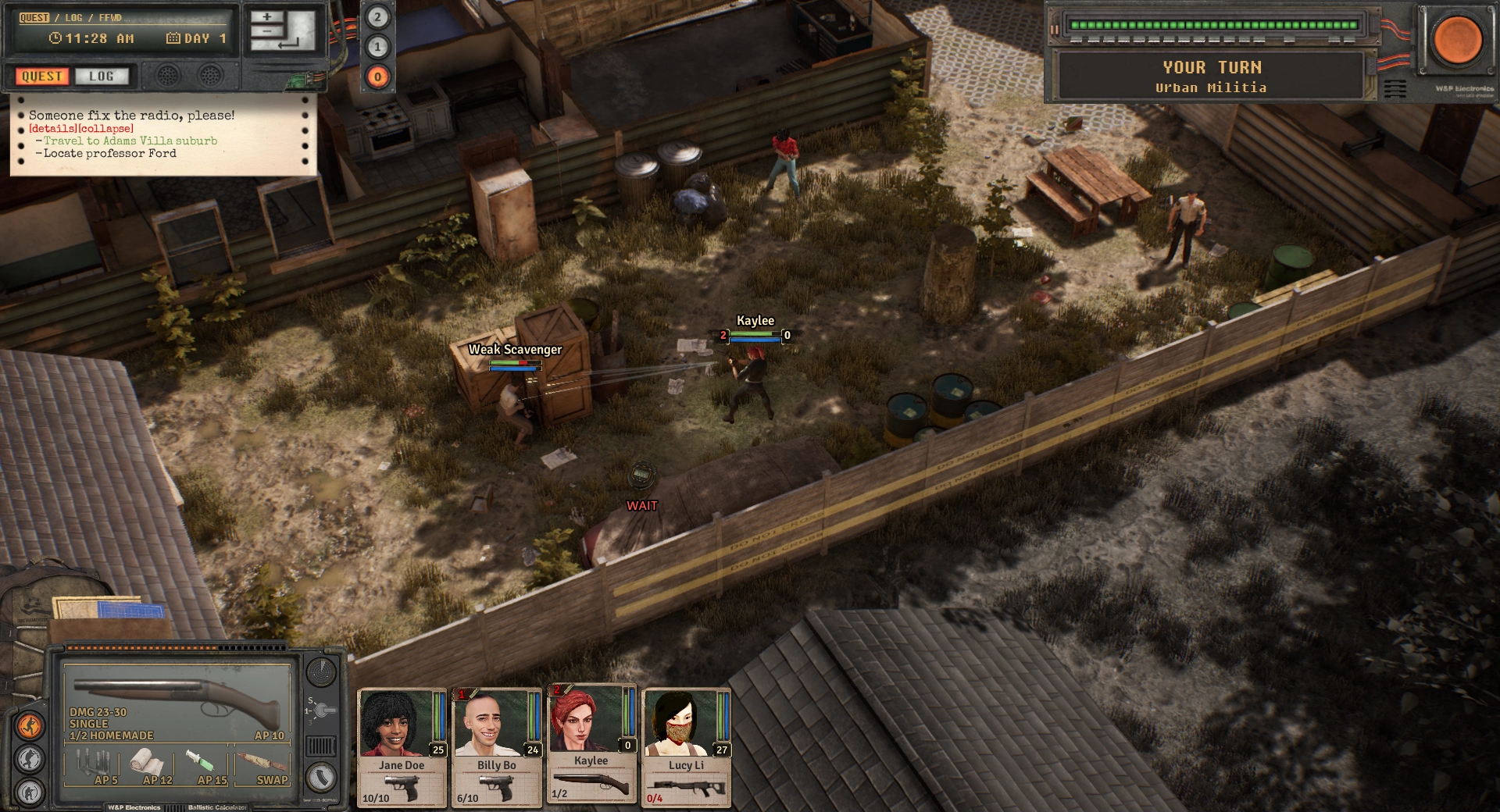 Urban Strife development has had multiple artists contribute their work when it comes to character models and their animations. It's quite a challenge to standardize input when you’re working with freelancers and when you couple that with the fact that the game includes work done years ago, some with source files lost, making upgrades to the characters risked being an impossible task.
As we’re adding new talent to the team, we’ve found out that we don’t have a way to import our models into major 3d tools. For example, importing animations on 3DS Max Biped from incompatible skeletons proved to be a hair pulling experience. So we went and built our own pipeline for HumanIK in Maya and Character Studio in 3DS Max. This now allows us to import/export animations generated from multiple sources, for different skeletons. Also, we took the time and built ourselves a complete library of all idle animations (the start point for animations in general) for any future expansions and modding.
This entire experience taught us a lot, so the post-release modding SDK will come with a special pipeline for Blender, the free, open-source 3D creation suite. We assume most modders would rather use that, considering the price of the professional tools isn’t exactly cheap.

As we’ve mentioned, the new tools allowed us to add new animations to Urban Strife and revamp some of the old ones that feel clunky or unnatural. You can see a small example of the old rotation in crouch vs the new one. The animation revamp is not just eye candy (it’s a lot of that too) but also goes into quality of life improvements. Poor animations, like the slow turn when opening containers, were on top of the list of complaints we had from the testers. Fluid movements produce smooth gameplay and while it’s not an easy task (Urban Strife uses more than 1000 animations), we’ll try to improve as many as we can.
Just to understand the complexity of our animations system, most of the transitions should be multiplied by 5 (unarmed, armed with a pistol, a rifle, a one-handed melee weapon or a two-handed melee weapon), then multiplied by 2 (standing / crouched) and then multiplied by 2 again (for the relaxed or aiming stances). Do the math

As promised, we’re resuming the regular dev updates and this month we have more good news for you.

A quick peek into the Urban Strife development after the Steam NextFest Prologue demo.

The Survival and Strategic layers are completed and working as intended in the game.

Love it.Just an idea:add some color to tell who´s friend or foe.
Tracking:)

As of August alpha version we do have red overlay for enemies (pulsating so not to break immersion) and chevrons above the heads of the alert enemies.

This looks fantastic, will buildings be destructible or at least the windows?

You can break windows and use them as entry point, yes.