TWOBIT is a really unique VR puzzle-platform game - only using his or her sight, the player controls a little robot in a strange room and helps him approach problems and puzzles, and ultimately unravels the mysteries of this dark and enigmatic place. TWOBIT will be first available for the Gear VR. Please visit Squidbeamgames.com for updates and news.

When Twobit asks for direction, a question mark appears above his head and a cursor allows the player to pick a location to explore. Once the robot has registered a new target, he then rolls into a ball and makes his way towards it. Some elements (such as buttons) can be activated by Twobit. When he reaches them, he asks the player if he/she would like him to proceed - the player can then confirm by nodding their head "Yes" in agreement or by shaking their head "No" in disagreement. The player can also look through Twobit's eyes at anytime during the game (this feature is called the 'Twobit Vision'). Finally, a mysterious countdown is visible on one side of the room and yes, indeed, something terrible happens when it reaches zero! Is there a way to prevent it to happen? 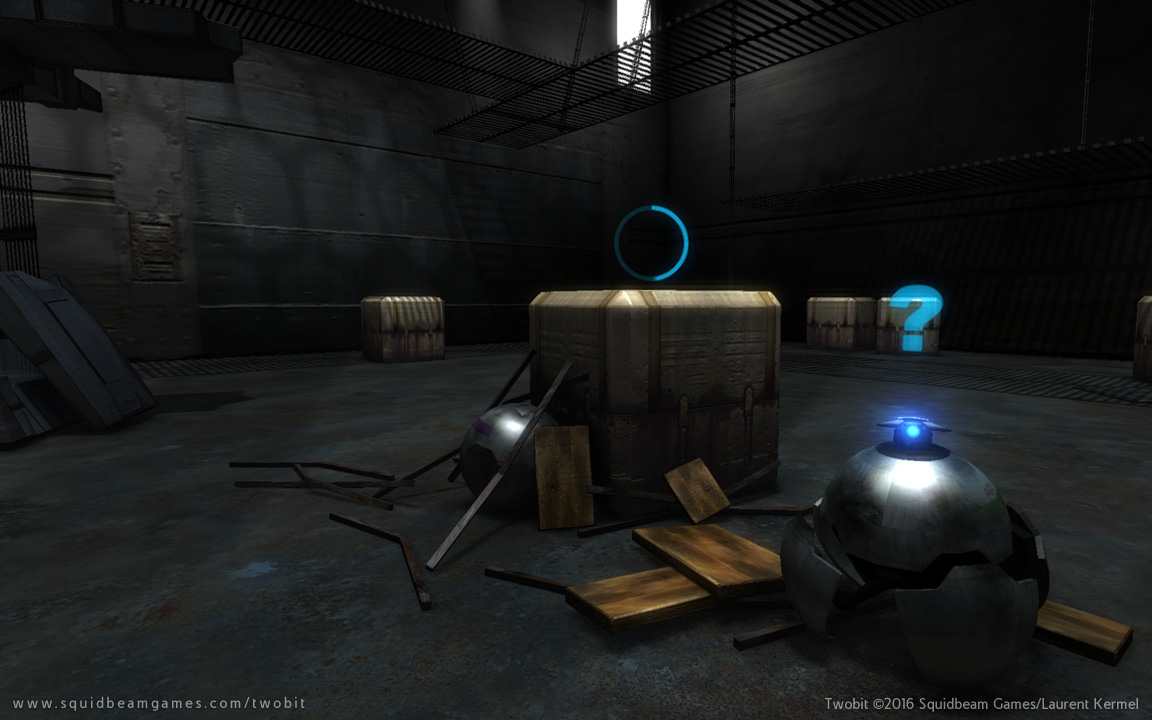 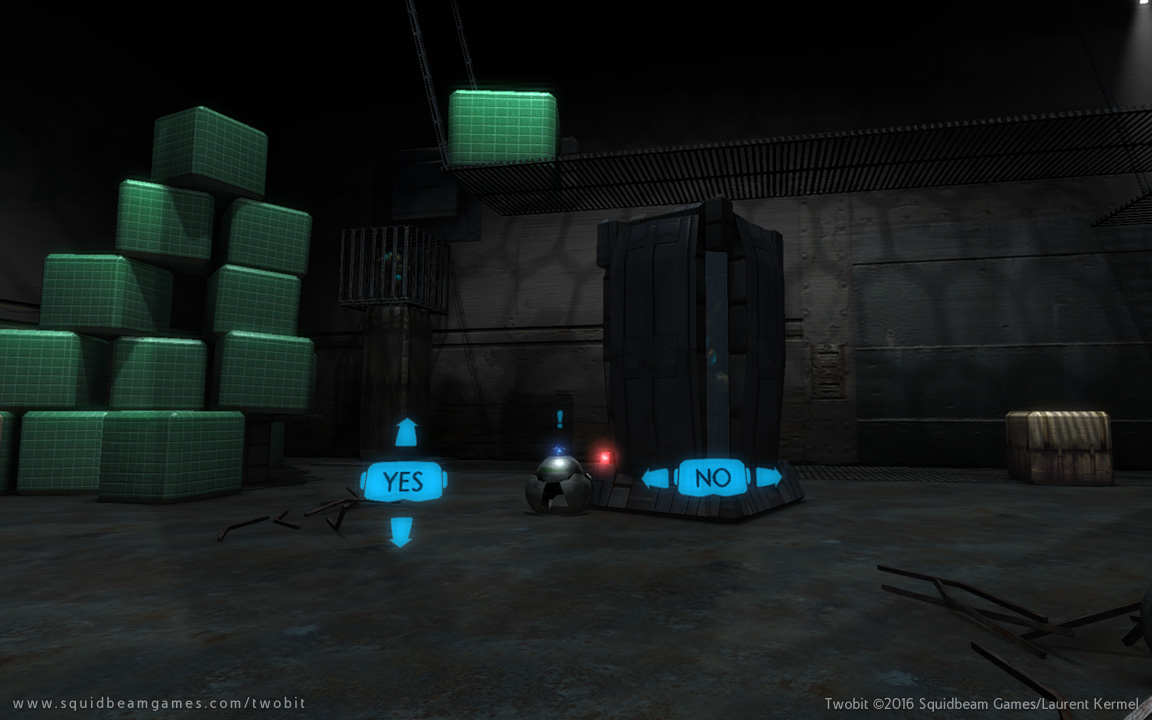 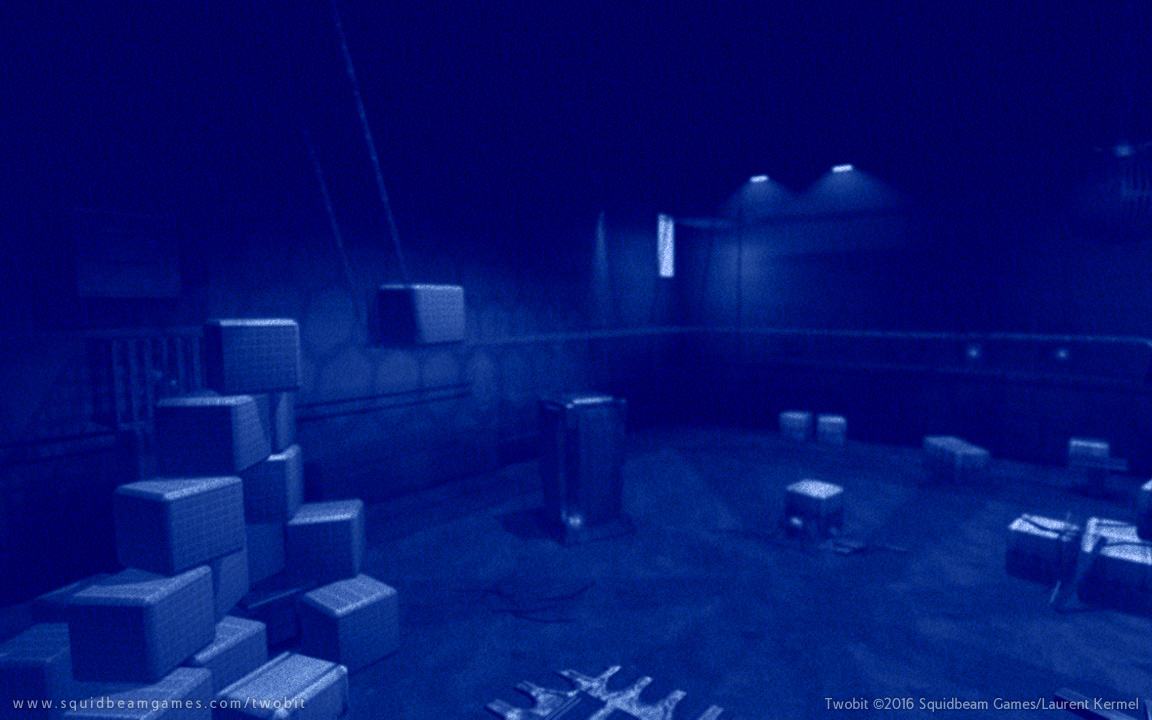 Twobit is the brain child of Laurent Kermel - founder of Squidbeam Games and an award winning visual effects artist. It initially started as a simple VR experiment to explore ways for players to control a character in VR, as well as trying to build a relationship between them. After receiving strong positive reactions from numerous players and friends, he decided to turn the experiment into a game. Twobit currently features only one level and this version will be available for free for players to enjoy. If there is enough interest, the game may be turned it into a full on puzzle-platform game.

To promote Twobit and grow its popularity (top games), use the embed code provided on your homepage, blog, forums and elsewhere you desire. Or try our widget.

A new version of Twobit is now available! This patch (v1.5) includes a lot of new things!

- Dramatically improved performance
- New display quality options (although the game runs fine on my s6 at 60fps without overheating)
- Improved Twobit response
- Found and fixed the bug that would make him freeze at times
- Twobit can now see things that you can't (such as flows of energy), which can give you clues on how to solve the puzzle

I have also added a lot of new things here and there, such as clues/tips when you go back to the menu screen and more feedback when you complete the room. I've also started working on the full game, I will keep you updated soon!

I am delighted to announce that the Gear VR version of Twobit has been approved for release on the Oculus Store! It will be available for free on October 19th 2016!
First a huge thanks to everyone who helped with the Beta testing! Your feedback was invaluable and very much appreciated! Second, even though being approved for release is exciting news, we are now very busy spreading the word about Twobit before it is out! No time to rest! :)

On The Shoulders Of Ancestors

Every time you die, you are getting one step closer to your destiny. Aim upwards to reach the exit and progress to next level. And if you can't get any...

Cloudbuilt is a game of speed, precision and freedom. Quick wits and even quicker reflexes will become your closest friends as you carve your own path...

FictionSphere is an Action Packed Technical Platformer with Light RPG elements, where you can create your own custom combos to defeat enemies quickly...

In the beginning there was nothing. There was only silence. Then a tiny object appeared... The Architect is the twisted sci-fi/abstract labyrinth game...

EscapeFrom2D will tell us about how hard it is to be a fictional hero of a fictional world and what people are ready to do to know who are themselves.