Beam up victims with your UFO! A simple game inspired by arcade crane claw machines.

Click here if you have trouble playing the video.

And I made a few other changes. Thanks everyone who tried out the game and left comments!

I've released the game for free so lots of players can enjoy it. If you like the game, please let your friends know! If you share this link, I'll be able to see how many people have tried the game. That's the only reward I get, apart from positive comments. 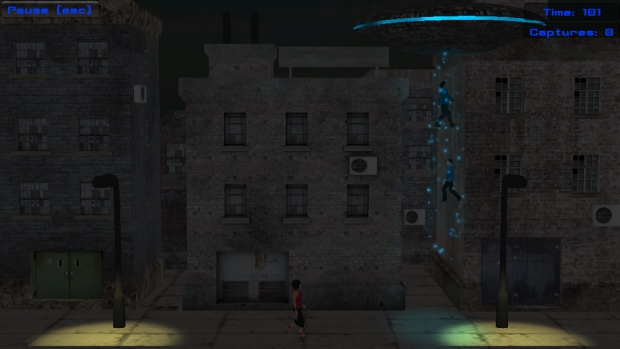 Last chance to provide feedback before the release next weekend! Check out the new levels, new victims, a tutorial, and some minor tweaks.

Second beta version: Beam MULTIPLE victims up into your UFO, complete with sound!

First beta release! Beam people up from the sidewalk!

Beam up victims with your UFO! Train well, fellow aliens!

(EDIT: RELEASED, see other download) Releasing next week! Last chance to provide feedback! Added extra levels, a tutorial and a bunch of tweaks.

Gave it a go!
14 captures was my best round.
No bugs. kinda fun, only for a couple of rounds.
Needs to have additional animations, more fast running people (only got 1 of them). Perhaps make the world larger and allow side-scrolling of the ship (in a smaller scale of course).
Long term goal, have vertical and horizontal movement with potential attacks from random citizens.
Just my feedback, and in no way meant to be offensive.
I cannot even create a pong game.

Thanks for the feedback, Jet!

I'm waiting on my animator to get back to me with the women's animations. Hopefully by this weekend's update!

I have more levels planned, with different locations and types of victim. I should have at least one done for the update on the 21st/22nd September weekend.

Interesting suggestions (larger world, attacks from victims)! I have some ideas along similar lines, and I'm not sure whether to add them as a set of later levels or a completely separate game.