Welcome back to this month’s update for The Pedestrian! We started off this month by taking a much needed family vacation, after which we all came down with the flu :) But neither of those things kept us from making progress! Our main focus was on finalizing gameplay for the game’s third act. We wanted to make sure that the more advanced puzzle mechanics were explained well and utilized effectively. So most of our efforts were in the Inner City and Rooftops areas. We added new puzzles and greatly improved the usability of existing ones and their flow between each other. We also gave a little visual love to one of the last transition areas in the game.

Click above to watch the video version of this month’s update.

If you all don’t know. A couple months ago we started posting weekly videos on Youtube. They range dramatically in topic, from technical to the artsy/design side. If you wanna see more of the behind the scenes in video form, head on over there! 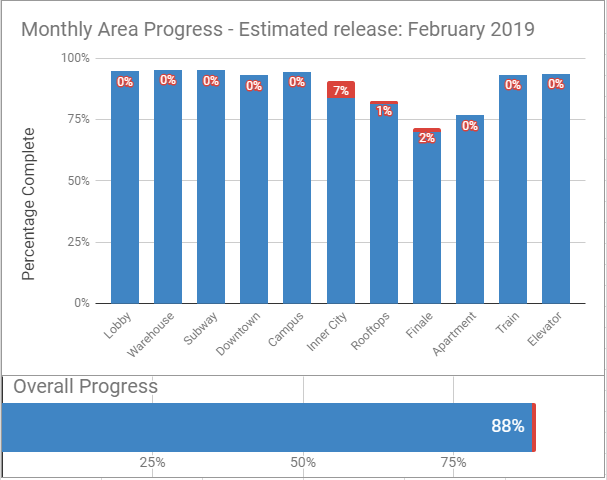 Here’s the numerical representation of our progress. The red bits are work done to the individual areas since our last update.

This particular hallway is from a later portion of the game. Up until now, it was blocked out with whatever props we had on hand at the time. Daniel did a fantastic job of bringing the visuals up to the level of the rest of the game by creating new models, textures and lighting. Finalizing this transition area.

We did a lot of work with the Inner City puzzles. The mechanic that is introduced in the Inner City wasn’t clearly explained, and when trying to solve puzzles, the goal was oftentimes difficult to find. So we made modifications to two of the puzzles in the area and added another to help more comprehensively use and explain the mechanic. We also rejigged the puzzles to fit into the area better, by bringing them closer together. Now that they’re in closer vicinity we need to do less visual work and the player will have less distance to travel.

This month we added two new puzzles, one in the Inner City and one in the Rooftops with plans for three or four more puzzles throughout the game. Experimenting with new puzzles is always fun in the studio, because we get to experience each other’s puzzles for the first time. And actually solve a puzzle, instead of going through the motions of our memory.

Here’s the old task spreadsheet for those of you that want to see all the little unedited progress points. Click here!

Overall we’re pretty happy with the progress made, the third act is getting ever closer to being testable. With new puzzles and improved existing puzzles the game as a whole is improving to a state that is more finished than ever before. Thank you all so much for your continued support, and if you haven’t already, please subscribe, follow, and like all of our socials.