The Dead Never Die: The Chronicles of Survivors

„Imagine, that world which you knew doesn't exist - no television, internet, even everyday problems. The only sense of your miserable existence is will to fight and survive. Don’t forget only one thing - you're alone, and they’re ... too many.”

As the main designer of The Dead Never Die: The Chronicles of Survivors will try to describe what in fact is this project and how it looks from the perspective of an ordinary player. Of course I would like to reassure that the majority of elements described by me are finding their place in the code and the only thing left to do a final "epaulettes" which we will see during the public tests of a alpha version.

Let's start with a brief characterization of the characters. During the game you can play one of the three available survivors. Ethan - tourist who came to Broken City(name can change) in order to admire the local monuments, George – IT student and Thomas – local businessman. They are the only survivors of an epidemic caused by a mysterious virus H.I.V.E ( Hunger, Irrationality, Violence, Eeriness) causing human photophobia, unbridled aggression, lack of rational thinking and unnatural hunger. Of course, creating that type of epidemic is not just a matter of plot, but a means that allowed us to create an interactive environment with broken down by day and night. 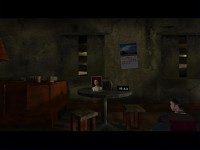 Day - this stage is focused on the exploration of the surrounding world, repairing parts of refuge and, most of all, searching for other survivors. However, the night is quite different, ceaseless struggle for survival and desperate defense scraps of "safe place". It could be fair to say that TDND: TCOS is in fact no one but two games, evidenced by the radically different tasks played in both parts of the day. One of the most interesting may be an attempt to break into the generator to re-restore the power source (ultraviolet light). Apparently trivial task, taking place during one night and turns out to be spectacular struggle for survival. Of course, with time every night brings more and more difficult and dangerous challenges, forcing us to change our shelter. In this case, a key role have daily tasks such as finding a suitable place for the new shelter, and gathering items for its construction (boards, nails, etc.).

Beyond the struggle waiting for us a fully interactive environment allowing to meet the needs of the main character such as hunger, fatigue and physiological needs. Almost everything what accompany us in the real world has been imitated. On special attention deserve food system in which to reduce the level of hunger we reach for food found in the fridge. Of course, when we’re out of supply, we’re forced to supplement them. In this case, may be a good idea to visit the devastated store, or a nearby abandoned houses.

Another innovation is the indicator of exhaustion, which is associated with lack of sleep. But remember that when the "falling" into the arms of Morpheus (in Greek mythology, the god of dreams) are partially deprived of observing the world around us. Therefore, the events happening during sleep, may have deplorable effects. Golden rule in this case is to carefully check the barricades and check the situation before we go to bed. It should also be noted that with support for PhysX engine, player will be able to directly affect the location of items on map. 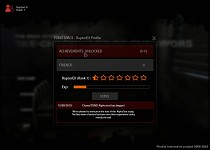 Some time ago we were asked about presence of a multiplayer in TDND: TCOS. The answer is YES - you can fight for survival with other players. However, at a much later time (alpha test version 2) and in a little different way than it is in single. Well, at the beginning of the game, each player creates its own character and gives it their own parameters such as appearance. Then players, up to 10 (later this number will likely be increased) are randomly scattered across the map. First objective is to find each other and establish a common defense place. Then players are put to the challenge to survive 30 days in a virtual game world. That’s all for now in this topic, more details about this and other game modes will be pass later.

Regarding the visual side, the engine TDND: TCOS - dth.engine - underwent a series of improvements that have allowed us to create an interesting style of presentation of the virtual world. The final result will be consisting, inter alia, dynamic lighting, normal mapping, depth of field and day / night cycle which I'm probably most happy. At this stage I can say that when we launch this project in terms of graphic design it won’t look worse than Silent Hill 2.

Sorry for mistakes in grammar and sentence structure, our English is calling for vengeance. Greetings for all who are interested in our project

trailer was deleted, it will be published again (soon) when we will have a own composed music.

Alone in the Dark: Illumination

Inspired by the “Father of the Survival Horror Genre” classic from Atari and H.P. Lovecraft, Alone in the Dark: Illumination™ reinvents the series’...

Fort Zombie is a focused-scope, casual RPG title in which the game world revolves around a single building – your fort – and the mission specific...

The Haunted: Hells Reach is the standalone advancement of the Make Something Unreal Contest winner and highly acclaimed UT3 mod. The Haunted is a fast...

The blobs are back! Do you have what it takes? Our cute hopeless blobs must escape the limbo dark cave using their fast minecart! Challenge your skills...

You play a journalist who received a job that socked him after interactions with different kind of peoples. This events will make him find a secret world...

A new and mysterious virus was created after an experimental mistake in the biochemstry lab of Brattle University, Boston. Now, it's carriers have turned...

Indie
Tags
Embed Buttons
Link to The Dead Never Die: The Chronicles of Survivors by selecting a button and using the embed code provided more...