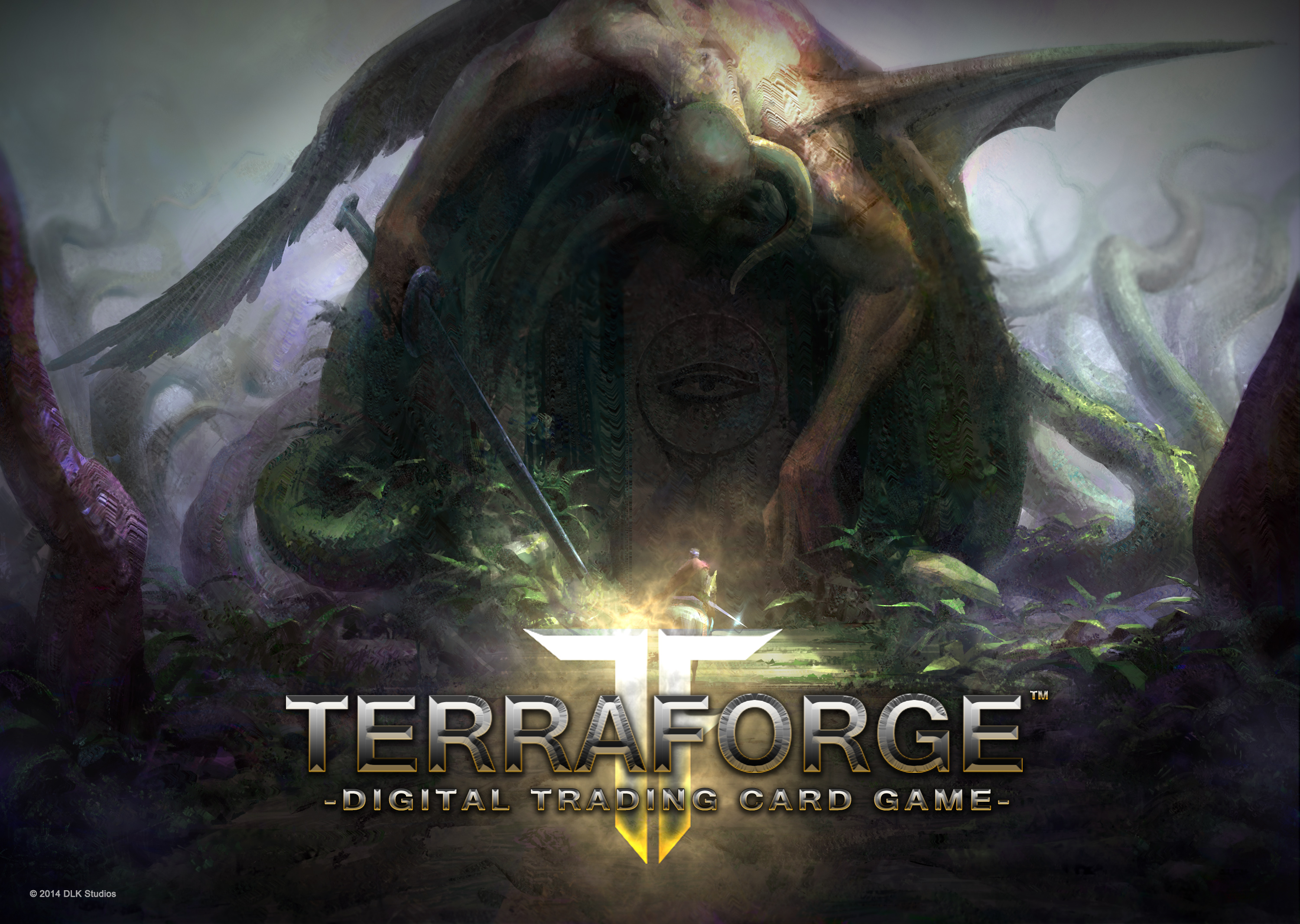 TerraForge is an MMORPG TCG, currently being developed by the DLK Studios team. The game is built on a compelling story about a world torn by chaos. In TerraForge you play as an Avatar, an idol of worship for the many creatures inhabiting the realm. As you play throughout the game, you will gain experience and level-up your Avatar. As your Avatar levels up, you will acquire skill points which can be used to unlock abilities from three different and very specialized skill trees. The abilities are intended to be used in conjunction with the cards contained within your deck. This brings an interesting dynamic to the traditional TCG elements, which is primarily focused around deck building skills.

There are three Avatar classes to choose from in TerraForge: the Mage, the Priest, and the Warrior. Each of these classes has specific strengths and weaknesses. It is up to the player to discover the different strategies and synergies associated with their Avatar class and the decks they build. Each class acquires their "Ability Resource" in different ways. For example, the Mage acquires its "Ability Resource" primarily by playing cards, with a bonus modifier given to spell cards that are played.

Players must build decks which contain at least 40 cards. A player can have no more than 3 copies of each individual card in their deck. Cards can be categorized into two types: creatures and spells. A deck can contain any number of creature and/or spell cards.

The mechanics of TerraForge are heavily dependent on board position. There are a total of 20 field positions where creatures may be placed. Each player has 10 field positions available to them, 5 attack positions and 5 defense positions. The combat in TerraForge is based on a column/lane system. Creatures may only attack down the column/lane which they are positioned in, unless they have an ability indicating otherwise. The same is true for defenders. The front row of each player's side of the board is reserved for attacking creatures, and the back row is reserved for defending creatures. Attacking creatures can choose to attack either creatures in the opposing attack position or the opposing Avatar, but cannot attack defenders. A defending player may opt to have their defenders defend their creatures or Avatar, if they are attacked.

In addition to the powerful creatures and spells packed in their decks, players also bring one Accessory and one Weapon to the battlefield. Weapons and Accessories are also represented by cards, the only difference is that you start with them in play. Accessories have passive abilities that help augment your Avatar towards a specific style of play, whereas weapons generally have activated abilities which require Terra Crystals (general resource) to active. Weapons and Accessories cannot be removed from play, but can be deactivated for a limited time using special cards and/or abilities.

There are three win conditions in TerraForge.

In TerraForge, cards are played by meeting specific threshold requirements associated with the five colors of Terra. The resources are typically allocated at a rate of one per turn and are separate from your deck. This ensures that players never experience games where they are forced into submission simply because they could not draw the resources required to play their cards.

Support us on Steam Greenlight!

I'm sure most people haven't heard of TerraForge, so here's the breakdown. TerraForge is an MMORPG TCG, the concept and foundation behind the game design has been in the works for about 3 years now, but we only started actual development (i.e. programming, developing assets, etc...) about a year ago.

TerraForge recently moved into it's preliminary Alpha phase. We're almost ready to launch the Alpha for players... but there's always that one bug to fix... Today we wanted to showcase our most recent Alpha trailer. Unlike most of the AAA trailers out there these days, we opted out of putting many superimposed decorations and flash entries and what not because we wanted to show the raw gameplay as much as possible. Basically, apart from the entry and exit to the trailer, what you see is what you get.

Anyways, without further delay, we'd like to present you with the 2015 TerraForge Alpha Trailer. We'd love to hear any comments/concerns you guys might have. Whether it's positive feedback or negative feedback, we welcome it all (as long as it's constructive).

Once again, really eager to hear what you guys think of it all :)

This news post documents and discusses the milestones in development progress of TerraForge, an MMORPG TCG being developed by DLK Studios. It took just...

Discussing all the little places where one can find inspiration for game art.